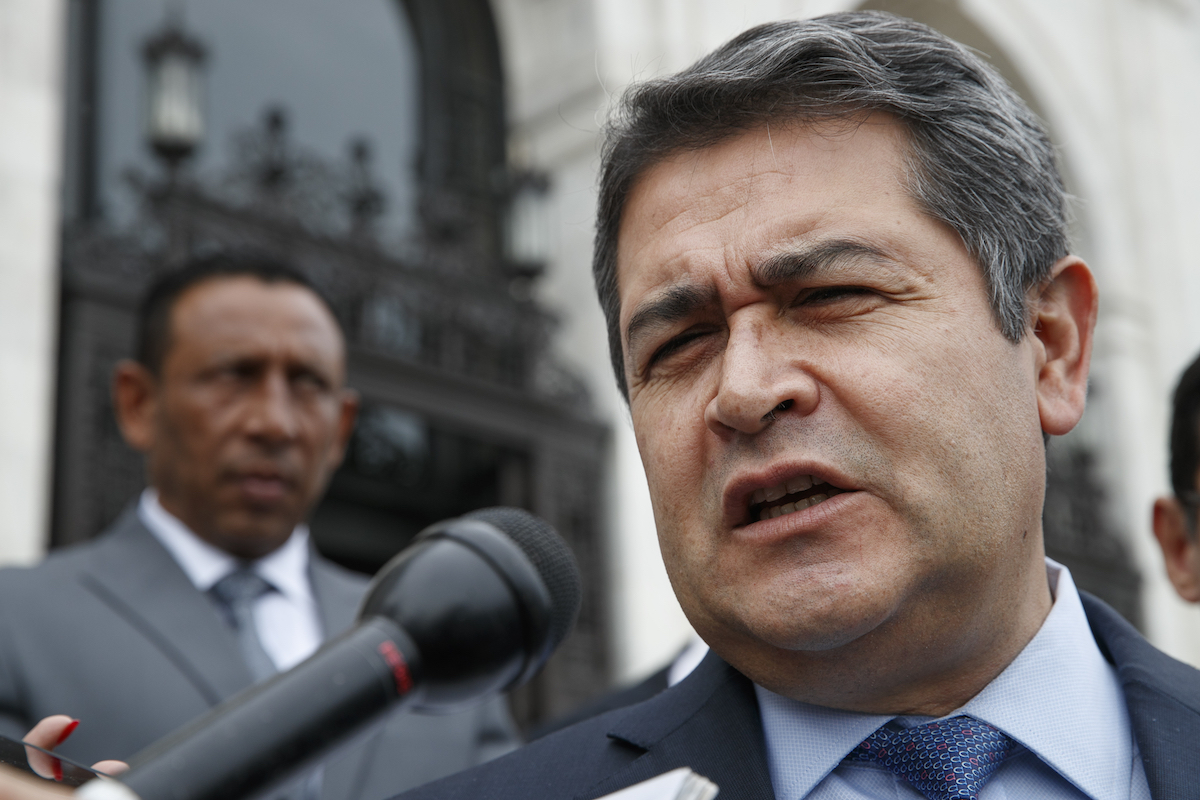 Honduran President Juan Orlando Hernandez answers questions from the Associated Press, Tuesday, August 13, 2019, as he leaves a meeting at the Organization of American States, in Washington. (AP Photo/Jacquelyn Martin)

NEW YORK (AP) — U.S. prosecutors said Tuesday that Honduras’ president met a drug trafficker around 2013 and took $25,000 in exchange for protecting the trafficker from law enforcement.

The U.S. Attorney’s Office for the Southern District of New York issued a statement referring to President Juan Orlando Hernández only as a “high-ranking Honduran official” or as “CC-4,” a co-conspirator. But in court documents, it identified “CC-4” as president of Honduras and brother of former congressman Juan Antonio Hernández Alvarado, who was convicted on drug charges last year. In previous filing, U.S. prosecutors have described “CC-4” as the winner of the 2013 presidential elections.

It was not clear if the alleged incident involving the trafficker occurred before or after federal congressman Juan Orlando Hernández won the 2013 presidential election. He took office in January 2014.

He has not been charged and did not immediately comment on the allegations, but he has repeatedly denied earlier allegations of connections to traffickers.

They say Fuentes met with Juan Orlando Hernández on several occasions and spoke of a cocaine laboratory that Fuentes was running near Puerto Cortes on the Atlantic coast. Juan Orlando Hernández expressed interest in access to the lab because it was so close to the port, according to court documents, which did not explain why he was interested.

U.S. Attorney Geoffrey Berman said in the statement that “Fuentes Ramirez paved the way for unimpeded shipment of multi-ton loads of cocaine by bribing police and a high-ranking Honduran politician, and reporting directly to Tony Hernandez, another co-conspirator in the scheme and himself a former Honduran congressman.”

It’s not the first time U.S. prosecutors have linked President Hernández to the drug trade.

Last August, prosecutors said he had used $1.5 million from drug traffickers to help win the presidency in 2013. During his brother’s trial in New York last year, prosecutors repeatedly suggested President Hernández had benefited from the drug traffickers’ financial support.

His brother is scheduled to be sentenced in April. Hernández won re-election in 2017 in elections plagued with irregularities.

Yet Hernández has maintained the support of the Trump administration, which has pressured Honduras to slow the flow of migrants out of the country. The U.S. government plans to soon begin sending asylum-seekers from other countries to Honduras.

During a January visit to Honduras, acting U.S. Department of Homeland Security Secretary Chad Wolf said, “Honduras is a valued and proven partner to the United States in managing migration and promoting security and prosperity in Central America.”