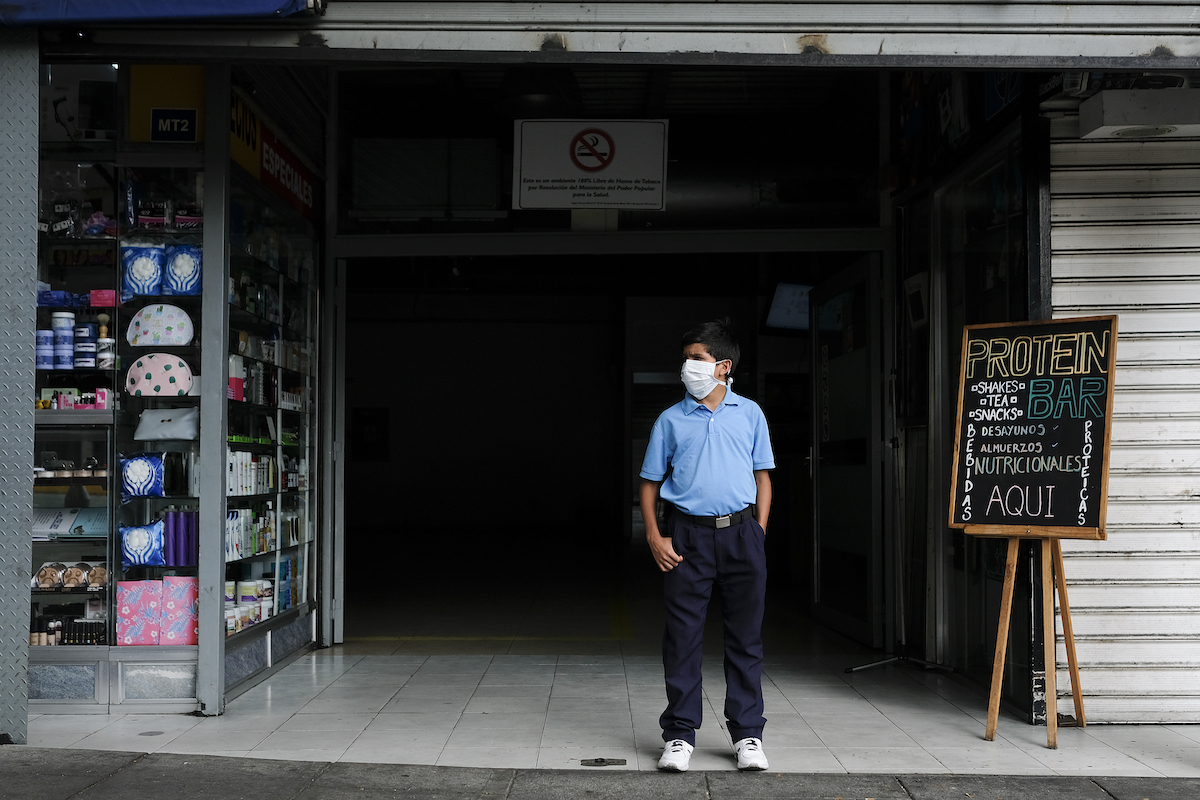 A boy, wearing a protective mask as a precaution against the spread of the new coronavirus, stands outside a store waiting his mother to finish shopping, in Caracas, Venezuela, Friday, March 13, 2020. (AP Photo/Matías Delacroix)

CARACAS, Venezuela (AP) — Venezuela confirmed its first two cases of the coronavirus on Friday, deepening anxiety in a crisis-stricken nation where many hospitals lack basics such as water and soap and struggle to treat even basic ailments.

“God help us,” hospital patient Carlos Chacón said after hearing the news that the pandemic had arrived in Venezuela.

“My mom is old and sick. So is my father,” said Chacón, a 48-year-old electrician who was first hospitalized four months ago with two broken legs from a motorcycle accident. “Here I am in this condition, stuck in this hospital bed.”

Earlier Friday, Vice President Delcy Rodríguez delivered the news that Venezuelans feared was coming: A 52-year-old man who had recently traveled from Spain, and a 41-year-old woman who had returned from a trip through the U.S., Italy and Spain, have been diagnosed with the virus.

Schools across Venezuela immediately closed, a day after President Nicolás Maduro suspended flights with Europe and Colombia in an attempt to ward off the illness. 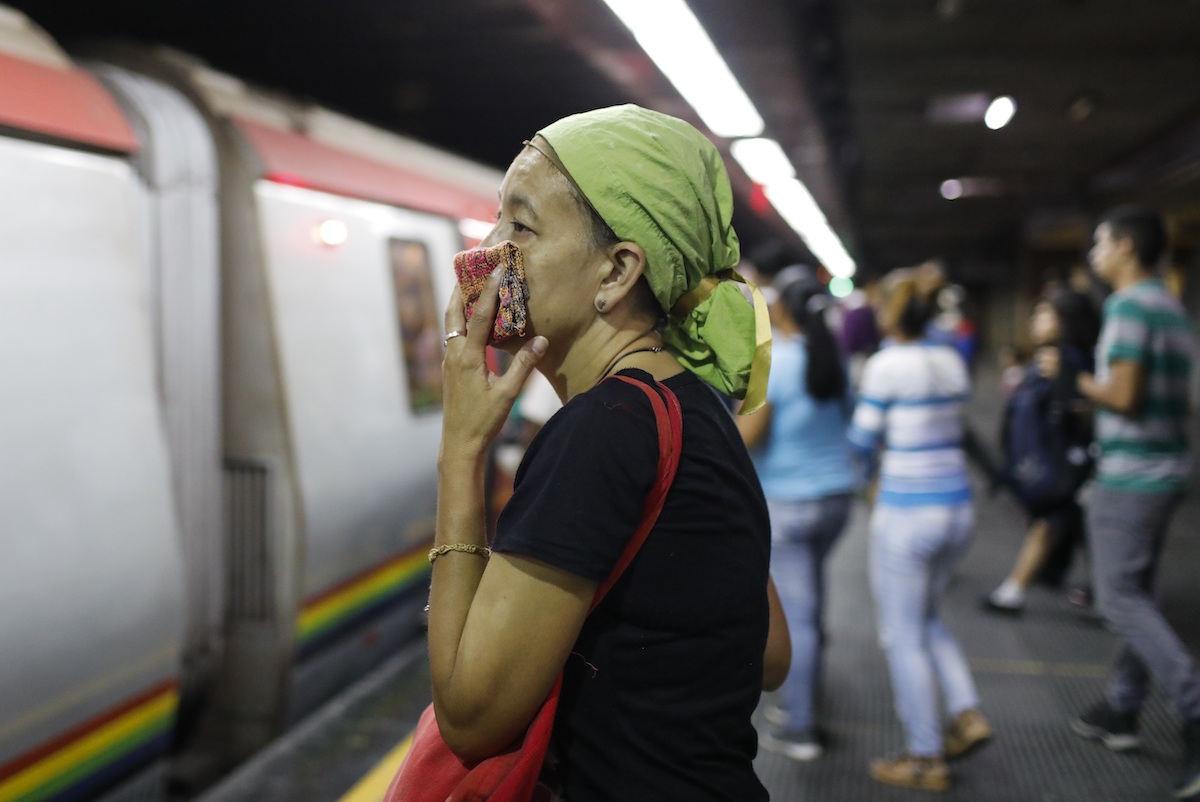 A woman covers her mouth and nose with a wash cloth on a subway platform in Caracas, Venezuela, Friday, March 13, 2020. (AP Photo/Ariana Cubillos)

Juan Guaidó also called off upcoming street demonstrations, taking away one of the U.S-backed opposition leader’s tools in his year-long battle to oust Maduro.

Health experts say Venezuela’s population is particularly the region’s most vulnerable and worry the virus could easily spread in a nation paralyzed by a political and economic crisis.

The country of roughly 30 million people was once a wealthy oil producer, pumping from the world’s largest reserves. Today, it’s beset by conflict, poverty and massive power failures that have driven out an estimated 4.5 million migrants in recent years.

Venezuela’s government does not publish health care statistics, but there are deep shortages of antibiotics and general supplies, including scarcities of basic items needed to confront an epidemic.

“Most hospitals don’t have water, face masks or even soap,” said Dr. Patricia Valenzuela, board member of the Venezuelan Society of Infectology. “We’re not prepared.”

A report by Humans Rights Watch in collaboration with the Johns Hopkins Bloomberg School of Public Health concluded last year that the health system in Venezuela has “totally collapsed.” It cited rising levels of maternal and child mortality as well as the spread of vaccine-preventable diseases.

In response to the news about the coronavirus cases, Venezuelans on Friday rushed to some markets and pharmacies in the capital of Caracas to stock up on food and supplies. By noon, goods were running out.

“If this is the first day, I don’t know what’s going to happen in a week or in a month,” said Genesis Suarez, a mother. She was shocked to see that a box of 50 face masks costs $31—a small fortune in a country where most workers earn a monthly minimum wage of $4.50.

“Its understaffed and ill-supplied healthcare system already collapsed years ago,” he said. 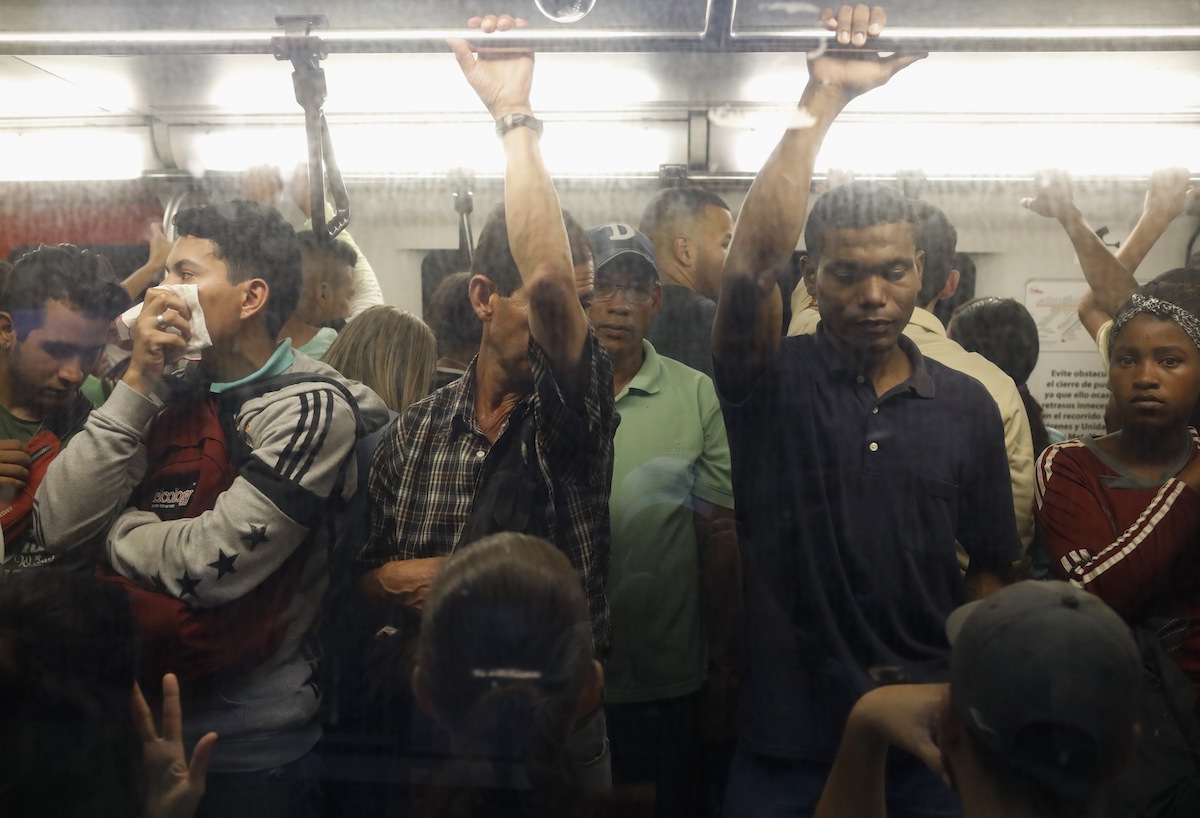 A man covers his face with a handkerchief while riding on the subway in Caracas, Venezuela, Friday, March 13, 2020. (AP Photo/Ariana Cubillos)

The Trump administration this week stepped up pressure aimed at ousting Maduro, hitting a second subsidiary of the Russian state-controlled Rosneft Oil Company with financial sanctions. Russia is a key ally of the Venezuelan president.

Maduro urged the U.S. to lift sanctions, saying they block the nation from buying medicine needed in health emergencies. U.S. officials maintain that the sanctions do not prohibit buying food and medicine.

Chacón winces each time he shifts his weight in a bed at Domingo Luciani Hospital in Caracas. He is struggling to raise $150 for medical treatment, hoping to leave the hospital as soon as possible for fear he could catch the virus there.

“Nothing works well here,” Chacón said. “There’s serious problems in health control, food supplies — with everything. Things are tough for us.”