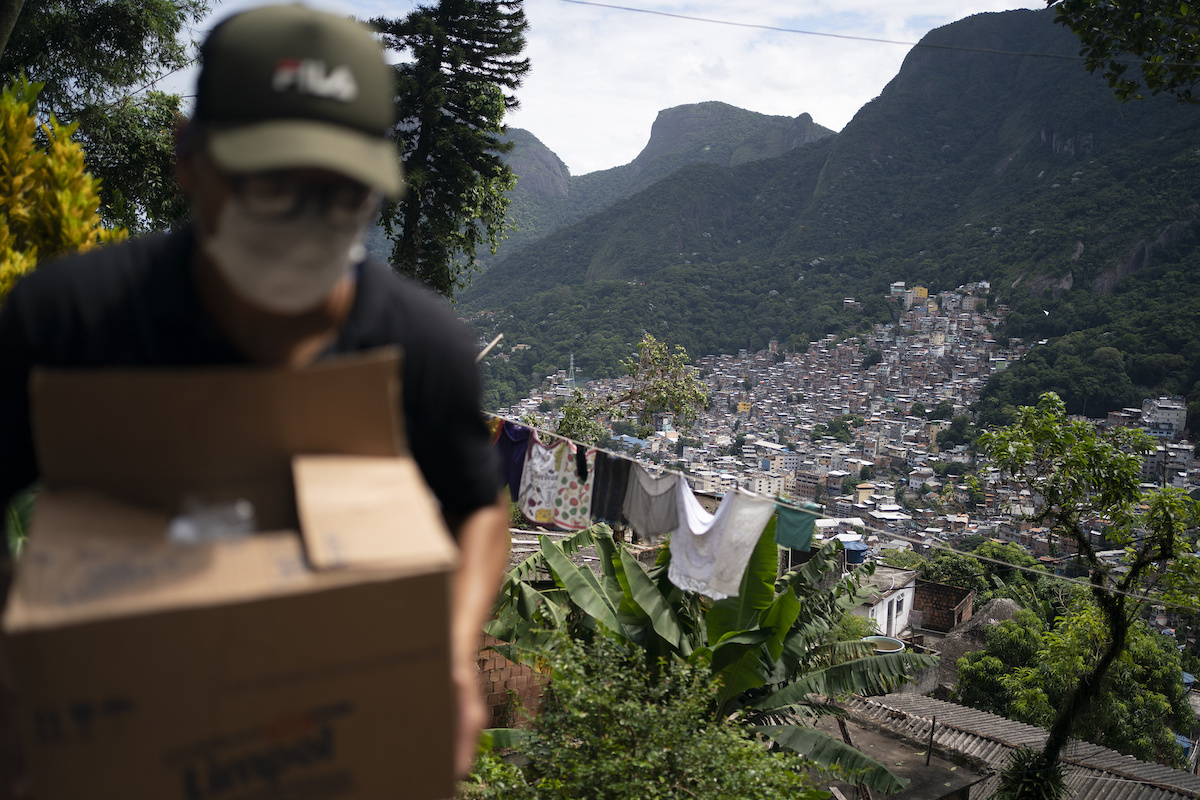 A local volunteer carries a package with soap and detergent to be distributed in an effort to stop the spread of the new coronavirus in Rio de Janeiro, Brazil, Tuesday, March 24, 2020. (AP Photo/Leo Correa)

SÃO PAULO (AP) — Brazil’s governors are defying President Jair Bolsonaro over his call to reopen schools and businesses, dismissing his argument that the “cure” of widespread shutdowns to contain the spread of the coronavirus is worse than the disease.

Bolsonaro contends that the clampdown already ordered by many governors will deeply wound the already beleaguered economy and spark social unrest. In a nationally televised address Tuesday night, he urged governors to limit isolation only to high-risk people and lift the strict anti-virus measures they have imposed in their regions.

“What needs to be done? Put the people to work. Preserve the elderly, preserve those who have health problems. But nothing more than that,” said Bolsonaro, who in the past has sparked anger by calling the virus a “little flu.”

The country’s governors protested on Wednesday that his instructions run counter to health experts’ recommendations and endanger Latin America’s largest population. They said they would continue with their strict measures. The rebellion even included traditional allies of Brazil’s far-right president.

Gov. Carlos Moisés of Santa Catarina state, which gave almost 80% of its votes to Bolsonaro in the 2018 presidential runoff, complained he was “blown away” by the president’s instructions. Moisés said he would insist that all residents stay home during the pandemic despite the president’s stand.

In a videoconference earlier in the day between Bolsonaro and governors from Brazil’s southeast region, Sao Paulo Gov. João Doria threatened to sue the federal government if it tried to interfere with his efforts to combat the virus, according to video of their private meeting reviewed by The Associated Press.

“We are here, the four governors of the southeast region, in respect for Brazil and Brazilians and in respect for dialogue and understanding,” said Doria, who supported Bolsonaro’s 2018 presidential bid. “But you are the president and you have to set the example. You have to be the representative to command, guide and lead this country, not divide it.”

Bolsonaro responded by accusing Doria of riding his coattails to the governorship, then turning his back.

“If you don’t get in the way, Brazil will take off and emerge from the crisis. Stop campaigning,” the president said. 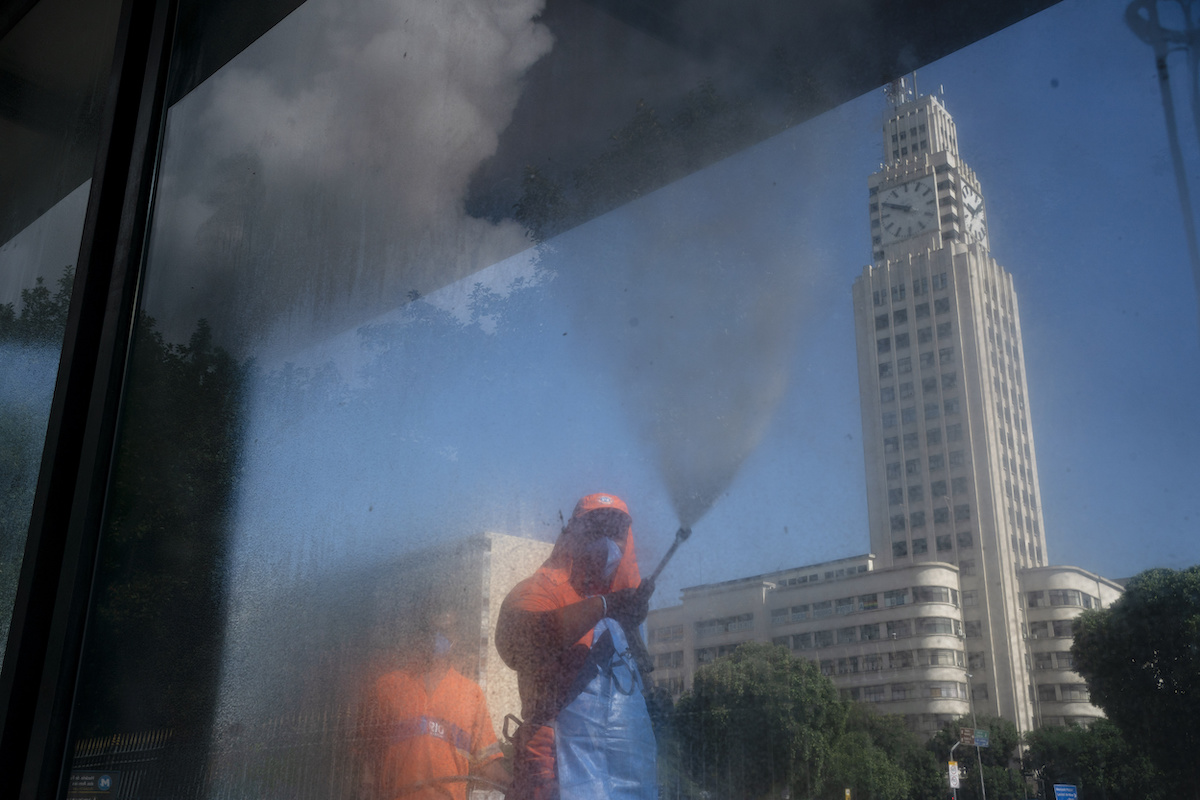 A city worker sprays disinfectant at a bus stop in Rio de Janeiro, Brazil, Tuesday, March 24, 2020, to help prevent the spread of the new coronavirus. The tower behind is the central train station. (AP Photo/Leo Correa)

The governors weren’t the only defiant ones. Virus plans challenged by Bolsonaro were upheld by the Supreme Court. The heads of both congressional houses criticized his televised speech. Companies donated supplies to state anti-virus efforts.

Bolsonaro told reporters in the capital, Brasilia, that he has listened to his U.S. counterpart, Donald Trump, and found their perspectives to be rather similar.

He has found some support among his base —#BolsonaroIsRight trended atop Brazilian Twitter on Wednesday— thought that backing has been countered by a week of nightly protests from many Brazilians respecting the self-isolation rules who lean from their windows to bang pots and pans.

For most people, the new coronavirus causes mild or moderate symptoms, such as fever and cough that clear up in two to three weeks. For some, though, especially older adults and people with existing health problems, it can cause more severe illness, including pneumonia and death.

As of Wednesday, Brazil had about 2,400 confirmed cases and 57 deaths related to the outbreak. Experts say the figures could soar in April, potentially causing a collapse of the country’s health care system. There is particular concern the virus’ potential damage in the ultra-dense, low-income neighborhoods known as favelas.

“Brazil is seeing something unique, an insurrection of governors,” Ferraz wrote on Twitter. “This will become a new topic in political science: checks and balances by governors in a Federal System.”

Brasil is seeing something unique, an insurrection of governors against the (lunatic) president that wants to ignore WHO guidelines as #COVID19 increases across the country. This will become a new topic in political science, checks and balances by governors in a Federal System

Rio de Janeiro Gov. Wilson Witzel, another former ally of Bolsonaro, also told the president in the videoconference that he won’t heed the call to loosen social distancing protocols.

Last week, Witzel announced he would shut down airports and interstate roads, which Bolsonaro annulled by decree contending that only the federal government can adopt such measures. By the time the president took to the airwaves Tuesday evening, a Supreme Court justice had ruled in favor of Witzel.

Two days earlier Brazil’s top court issued another ruling allowing São Paulo state to stop repaying federal government debt amounting to $400 million so that it can beef up its health sector. The decision may set a precedent for other states.

São Paulo, Brazil’s economic engine, is home to the majority of the coronavirus cases. It has been under partial lockdown since Tuesday, and schools, universities and non-essential businesses have mostly been closed for more than 10 days. Rio state has adopted similar measures, including closing its beaches. 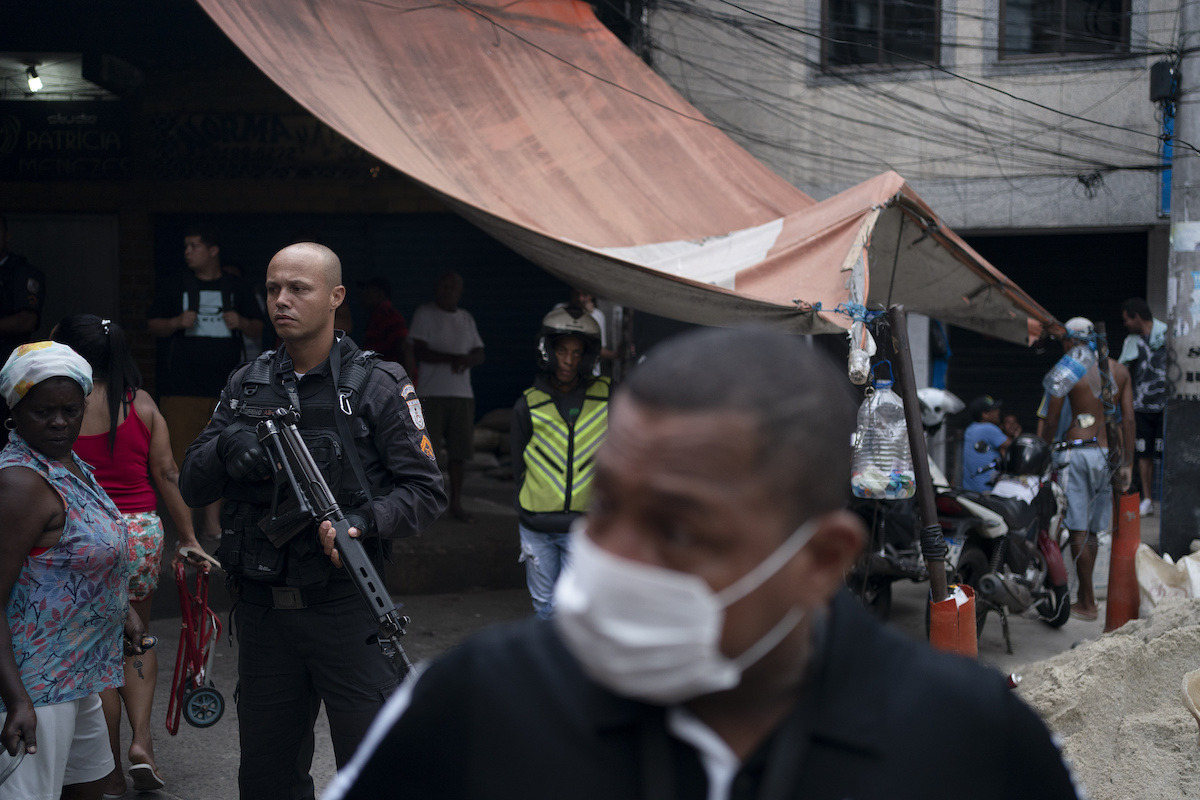 A police officer stands at the ready in a small market, as a local volunteer with a face mask walks away after distributing soap and detergent in an effort to avoid the spread the new coronavirus in Rio de Janeiro, Brazil, Tuesday, March 24, 2020. (AP Photo/Leo Correa)

Gov. Ronaldo Caiado of Goiás state, a physician who had been a close Bolsonaro ally, participated in a meeting late Wednesday of nearly all Brazilian governors to coordinate their efforts. The federal government wasn’t invited.

Caiado told reporters he is redefining his relationship with Bolsonaro.

“I cannot allow the president to wash his hands and hold others responsible for the coming economic collapse and loss of jobs,” Caiado said. “That is not the behavior of a leader.”