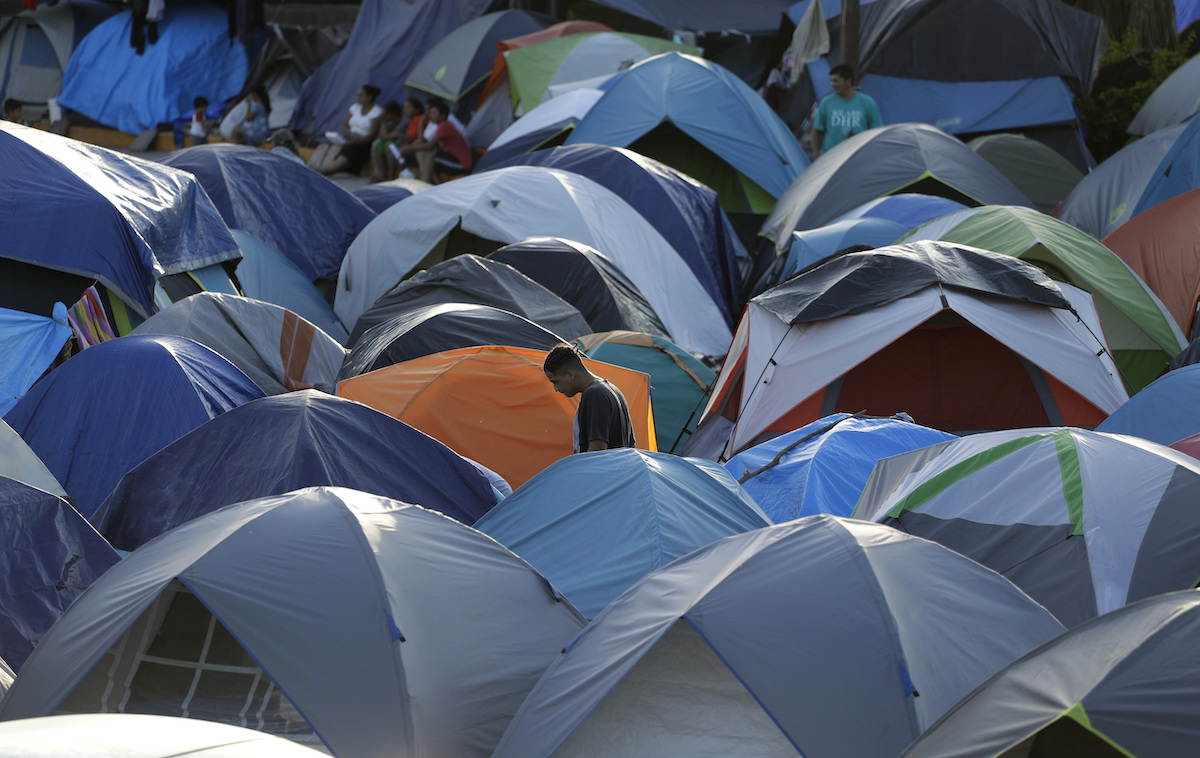 In this Tuesday, Nov. 5, 2019, photo, a migrant walks through a refugee camp in Matamoros, Mexico. (AP Photo/Eric Gay)

Fifteen of the individuals from Honduras, Mexico, Guatemala, Cuba and Cameroon were staying at a migrant shelter in the city of Nuevo Laredo, across the border from Laredo, Texas. They are in isolation.

The Nazareth migrants shelter in Nuevo Laredo said three of the infected individuals were minors. Of the 15, three were hospitalized but were released back to the shelter. More tests have been done at the shelter but no other cases have been confirmed.

The Tamaulipas state government said a migrant deported from Houston, Texas had entered the same shelter without knowing that he had coronavirus. Migrants now make up about 10% of the state’s 193 coronavirus cases, causing frustration in Tamaulipas.

“The state government, foreseeing the situation of multiple contagions of COVID-19 among the migrant population, has asked the federal government through official channels to transfer out of Tamaulipas the migrants who are stranded on the border,” the state said in a statement.

Hundreds of migrants remain in Nuevo Laredo and in the Tamaulipas border city of Matamoros, an estimated 2,000 people live in a squalid tent camp, waiting for their court hearings a short distance away in Brownsville, Texas.

The U.S. Immigration and Customs Enforcement (ICE) says that more than 100 migrants at 25 detention centers have tested positive for COVID-19. Guatemala claims that 44 migrants deported from the U.S. tested positive.

Mexico’s federal government has so far officially recognized only one case of coronavirus infection in a migrant, at the church-run shelter in Nuevo Laredo. The federal National Immigration Institute did not immediately respond to a request for comment.

The Catholic-run shelter is expected to release the results of further tests on the migrants.

Tamaulipas also said another migrant deported from Atlanta, Georgia and who had not gone to the shelter has tested positive after being detected at a border checkpoint. He has been returned to his home state of Michoacan for care.

The U.S. government said Monday it will continue to quickly expel migrants it encounters along the border for at least another month in response to the COVID-19 outbreak.

An order issued by the Department of Health and Human Services said the policy should be kept in place for another 30 days to help reduce the spread of the virus in detention centers. The new order extends the policy until May 20.

U.S. officials last month launched the new policy, saying it would be dangerous for Customs and Border Protection to detain people because of the potential spread of the virus. As a result, CBP has been turning away thousands of migrants.