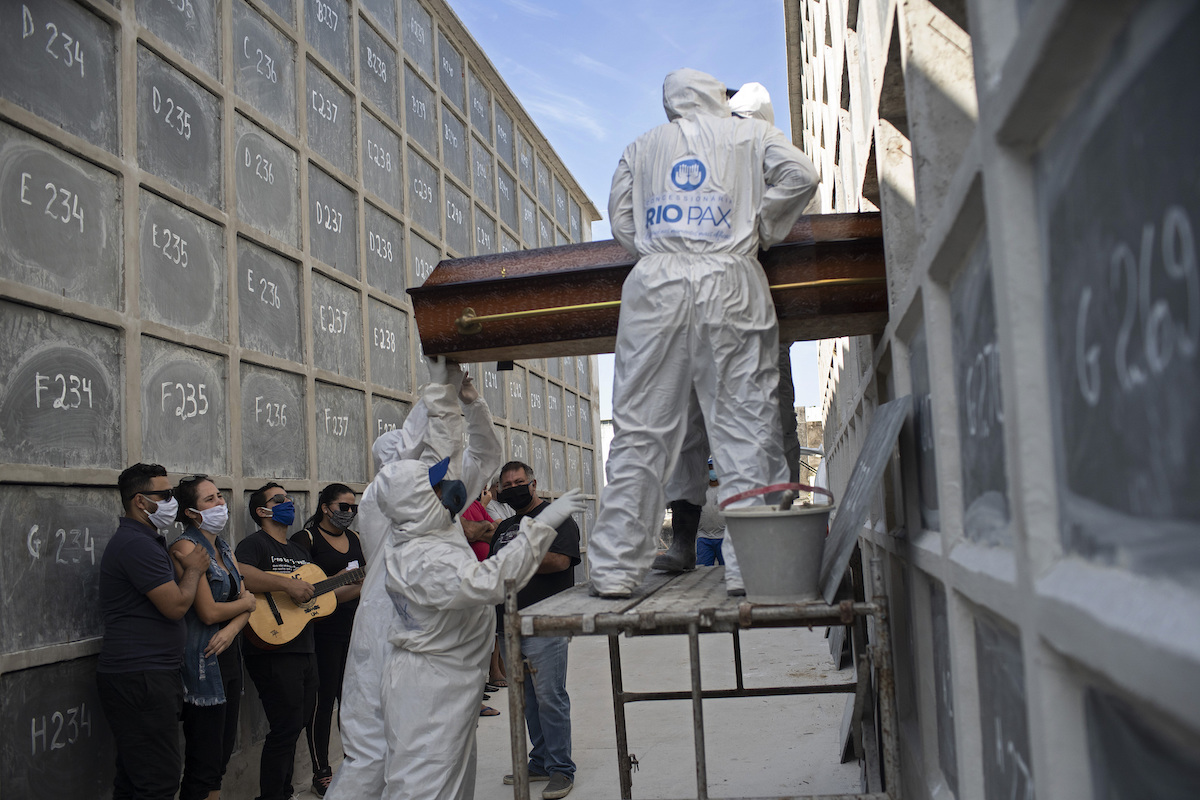 The family of Carmen Valeria watch her remains as they are placed into a niche by cemetery workers at the Iraja cemetery in Rio de Janeiro, Brazil, Thursday, April 30, 2020. The family suspects the 76-year-old died from COVID-19. (AP Photo/Silvia Izquierdo)

RIO DE JANEIRO (AP) — In Brazil’s bustling Amazon city of Manaus, so many people have died within days in the coronavirus pandemic that coffins had to be stacked on top of each other in long, hastily dug trenches in a city cemetery. Some despairing relatives reluctantly chose cremation for loved ones to avoid burying them in those common graves.

Now, with Brazil emerging as Latin America’s coronavirus epicenter with more than 6,000 deaths, even the coffins are running out in Manaus. The national funeral home association has pleaded for an urgent airlift of coffins from São Paulo, 2,700 kilometers (1,700 miles) away, because Manaus has no paved roads connecting it to the rest of the country.

The city of about 2 million people carved from the jungle has been overwhelmed by death in part because it’s the main site where those from remote Amazon communities can get medical services, according to Lourival Panhozzi, president of the Brazilian Association of Funeral Service Providers.

As of April 30, Brazil’s Health Ministry said that there were over 5,200 confirmed cases of COVID-19 in Amazonas state and 425 deaths, although there are concerns that inadequate testing for the virus has meant that the numbers may be much higher.

Before the outbreak, the city of Manaus, the capital of the state, was recording an average of 20-35 deaths a day, according to the mayor. Now, it is recording at least 130 a day, data from the state’s health secretary show.

People in the region also have been widely ignoring isolation measures.

There also are signs in the much larger cities of Rio de Janeiro and São Paulo that suggest authorities may not be able to handle a huge increase in the death toll. A field of fresh graves that was dismissed in April by President Jair Bolsonaro as excessive has since been filled. 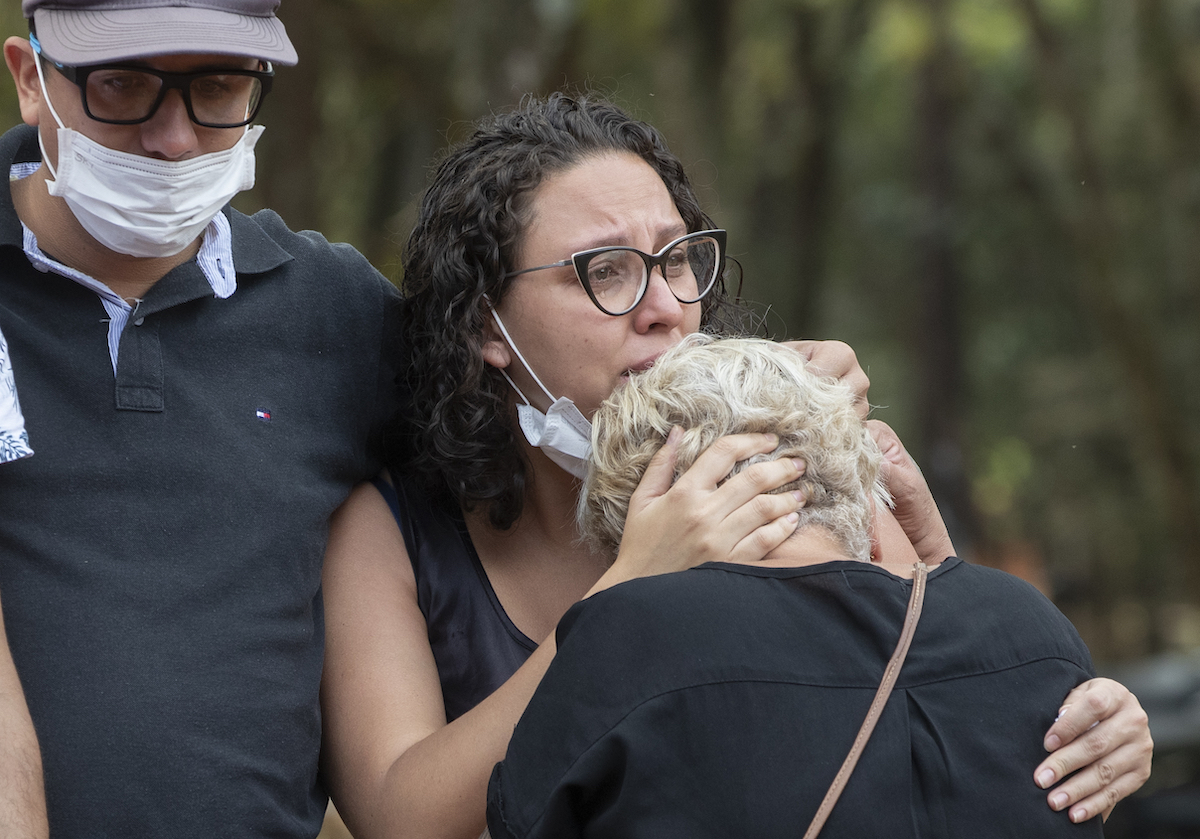 Relatives mourn at the burial of a person suspected to have died of COVID-19 disease, at the Vila Formosa cemetery in São Paulo, Brazil, Thursday, April 30, 2020. (AP Photo/Andre Penner)

Latin America’s grimmest scenes occurred last month in Ecuador’s city of Guayaquil, where residents said they had to leave bodies on the street after morgues, cemeteries and funeral homes were overwhelmed.

Many in Brazil fear the rising deaths will hit hardest in the favelas, the vast neighborhoods of the poor that are well-known in Rio and São Paulo but which also exist in most big Brazilian cities and even in smaller ones.

“There is a great fear that uncontrolled contamination will happen there,” said Panhozzi, whose group represents Brazil’s 13,400 private funeral companies.

In Rio’s Complexo do Alemao cluster of favelas, the body of Luiz Carlos da Rocha, 36, lay untouched for more than 12 hours Tuesday. Relatives didn’t know why he died but said he had epilepsy.

The state’s military police, which normally picks up bodies found outside, no longer does so for nonviolent deaths, said an officer at the scene who would not give his name. He said without elaborating that the policy change was due to the coronavirus. The military police press office did not respond to requests for comment.

The next day at Rio’s Hospital Salgado Filho in a lower-middle class neighborhood, Clovis de Castro, whose ailing sister Genina had just died, found himself helping out in the hospital’s morgue. He waited six hours to sort out death certificate paperwork in what he described as a chaotic scene in the morgue, with grieving relatives arriving to identify bodies and only one worker available to move corpses. At one point, he was asked to lend a hand.

“I had to help a person to put a body in a coffin,” de Castro said, adding that the experience made him “realize that people need help, the hospital needs help, the country needs help.”

De Castro left with a death certificate saying his sister’s cause of death was undetermined. He was angry that no autopsy was conducted that might have confirmed his suspicion she died of COVID-19 or complications from the disease.

“Why hide this stuff?” he asked.

São Paulo director of ambulance services Francis Fuji blamed a recent surge of deaths in homes on coronavirus patients who were discharged from hospitals with mild symptoms, only to have their conditions deteriorate rapidly.

Paramedics don’t have the training to identify COVID-19 as a cause of death, he said, and many relatives have lied about their loved ones’ symptoms to avoid the corpses being handled as though they were contagious.

“They think that if they get that diagnosis, then their loved one will be removed in a sealed plastic bag, they’ll never see him or her again, and they won’t even have a funeral,” Fuji said. 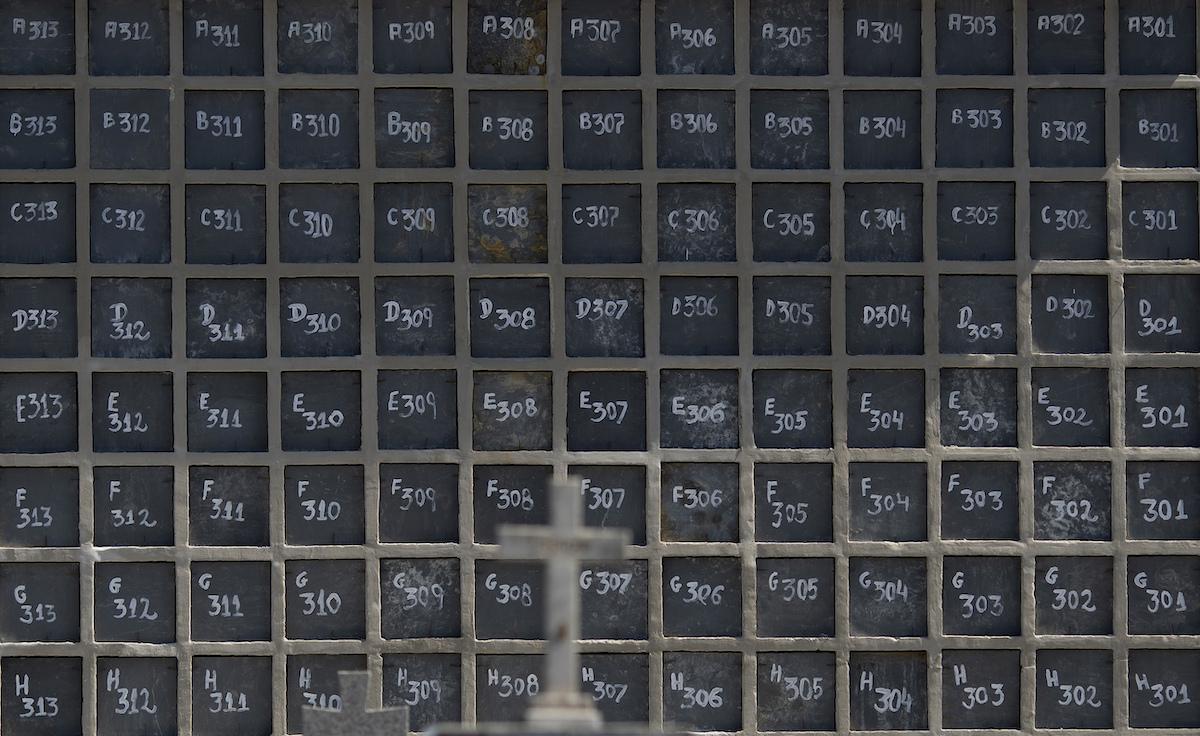 View of new niches during the Covid-19 pandemic at the Iraja cemetery in Rio de Janeiro, Brazil, Thursday, April 30, 2020. There were already plans this year to create more tombs at Iraja cemetery, but the new coronavirus pandemic accelerated the construction. (AP Photo/Silvia Izquierdo)

Authorities in São Paulo dug hundreds of graves last month in anticipation of a rise in deaths. Bolsonaro has likened the coronavirus to “a little flu” and insists that sweeping state measures to close all but essential business are more damaging than the illness. On April 2, he questioned whether photos by The Associated Press of the new graves were “fake news” or “sensationalism.”

By Thursday, all those graves were filled with the dead, as were dozens of other new ones, according to images by the AP photographer who took the original photos and revisited the site on Sao Paulo’s eastern region. Refrigerated trucks to hold overflows of bodies are now seen outside hospitals and cemeteries.

In Manaus early Thursday, Raimundo Costa do Nascimento, 86, died of pneumonia in his home. Funeral workers were so swamped that his relatives had to wait 10 hours for someone to retrieve his body. 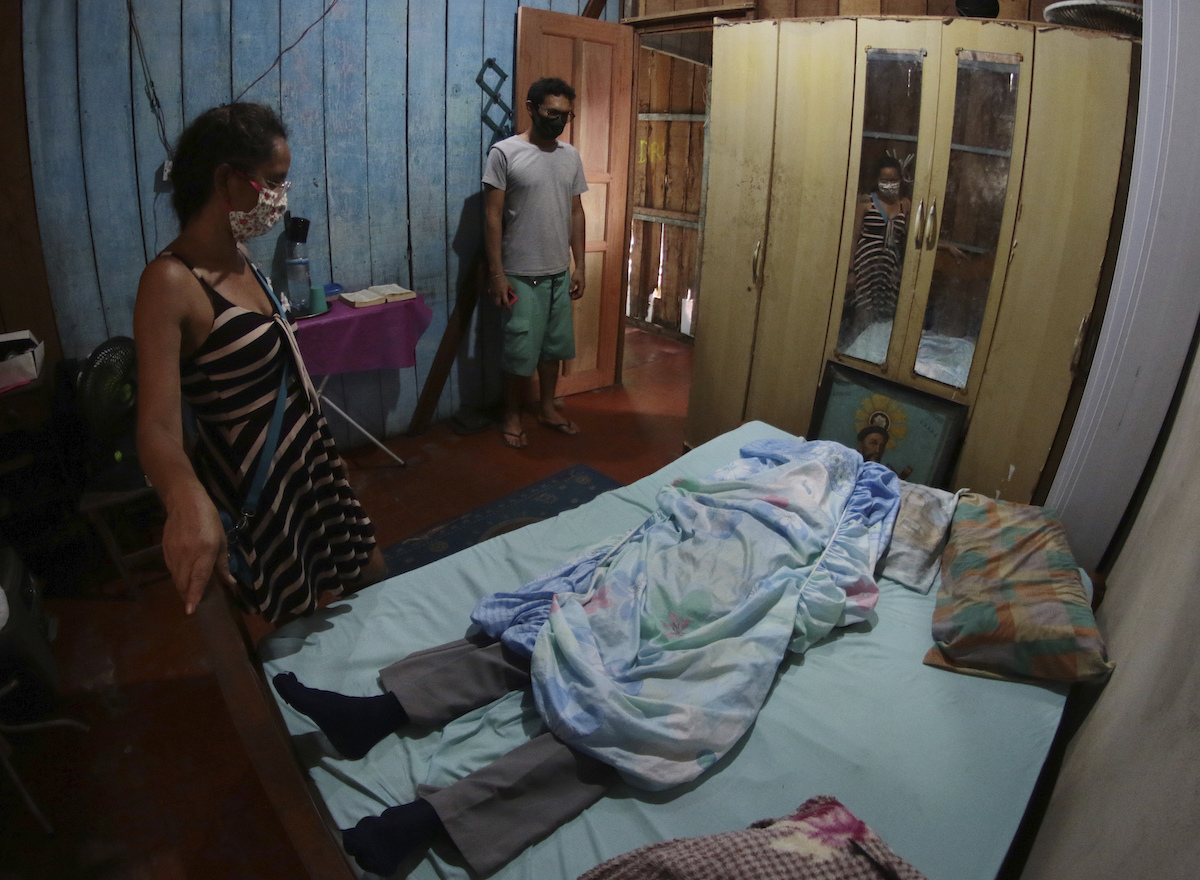 Relatives stand next to the body of Raimundo Costa do Nascimento, 86, during the new coronavirus pandemic at his home in Sao Jorge, Manaus, Brazil, Thursday, April 30, 2020. (AP Photo/Edmar Barros)

A week after Panhozzi’s association appealed for the coffins for Manaus, he said the request is still being considered.

One response to “Virus Surge in Brazil Brings a Coffin Shortage, Morgue Chaos”