Venezuela: 2 US ‘Mercenaries’ Among Those Nabbed After Raid 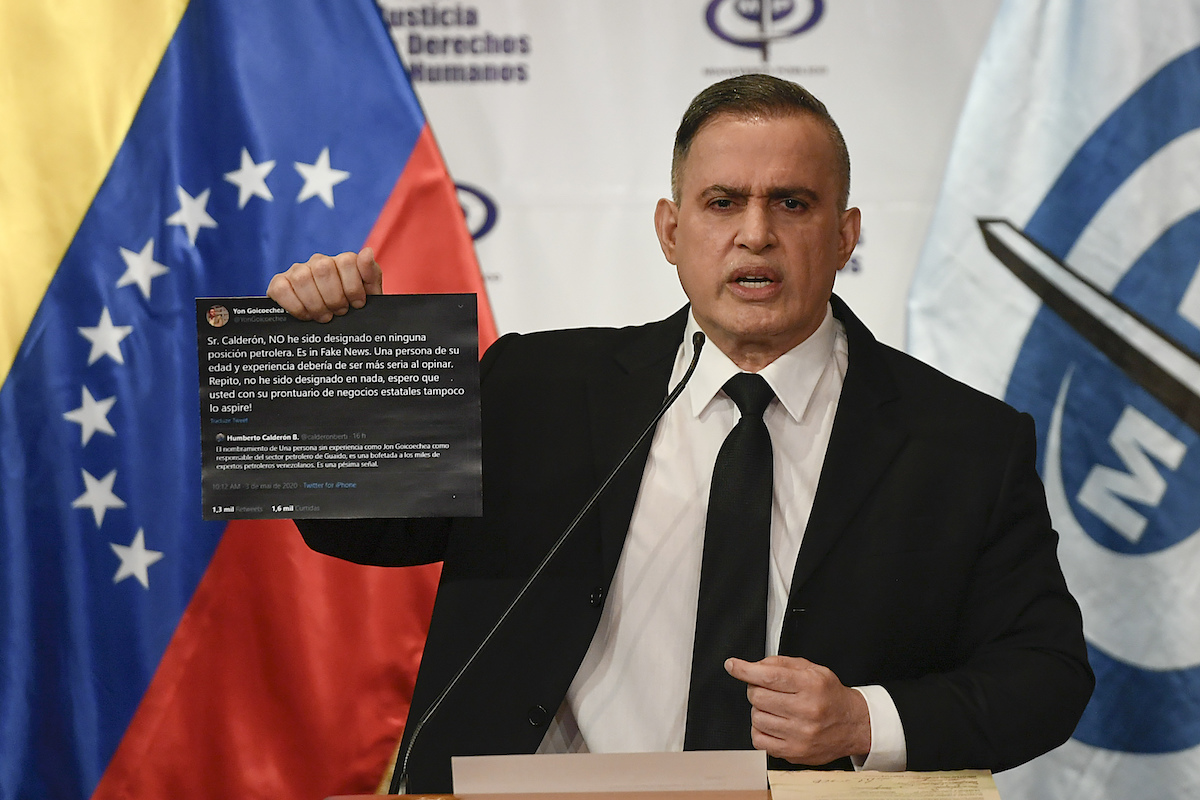 Venezuela’s Attorney General Tarek William Saab holds up Twitter posts during a press conference regarding what the government calls a failed attack over the weekend aimed at overthrowing President Nicolás Maduro in Caracas, Venezuela, Monday, May 4, 2020. The Twitter posts are between two members of the opposition, Humberto Calderon and Yon Goicoechea. (AP Photo/Matías Delacroix)

Maduro held up a pair of blue U.S. passports, reading off the names and birth dates on them in a nationwide broadcast on state television. He showed images of the fishing boats the alleged attackers rode in on and equipment like walkie-talkies and night-vision glasses collected in what Maduro called an “intense” couple of days. He blamed the attacks on the Trump administration and neighboring Colombia, both of which have denied involvement.

“The United States government is fully and completely involved in this defeated raid,” Maduro said, praising members of a fishing village for cornering one group in the sweep netting the “professional American mercenaries.”

Before dawn on Sunday, officials say the first attack started on a beach near Venezuela’s port city of La Guaira, when security forces made the first two arrests and killed eight others attempting to make a landing by speedboats.

Florida-based ex-Green Beret Jordan Goudreau said earlier Monday that he was working with the two men in a mission intending to detain Maduro and “liberate” Venezuela. Goudreau has claimed responsibility for the operation.

The two served in Iraq and Afghanistan with him in the U.S. military, Goudreau said, adding that they were part of this alleged mission in Venezuela called “Operation Gideon.” The aim was to capture Maduro.

Venezuela has been in a deepening political and economic crisis under Maduro’s rule. Crumbling public services such as running water, electricity and medical care have driven nearly 5 million to migrate. But Maduro still controls all levers of power despite a U.S.-led campaign to oust him. It recently indicted Maduro as a drug trafficker and offered a $15 million reward for his arrest.

Venezuela and the United States broke diplomatic ties last year amid heightened tensions, so there is no U.S. embassy in Caracas. Officials from the U.S. State Department did not respond Monday to a request by The Associated Press for comment. 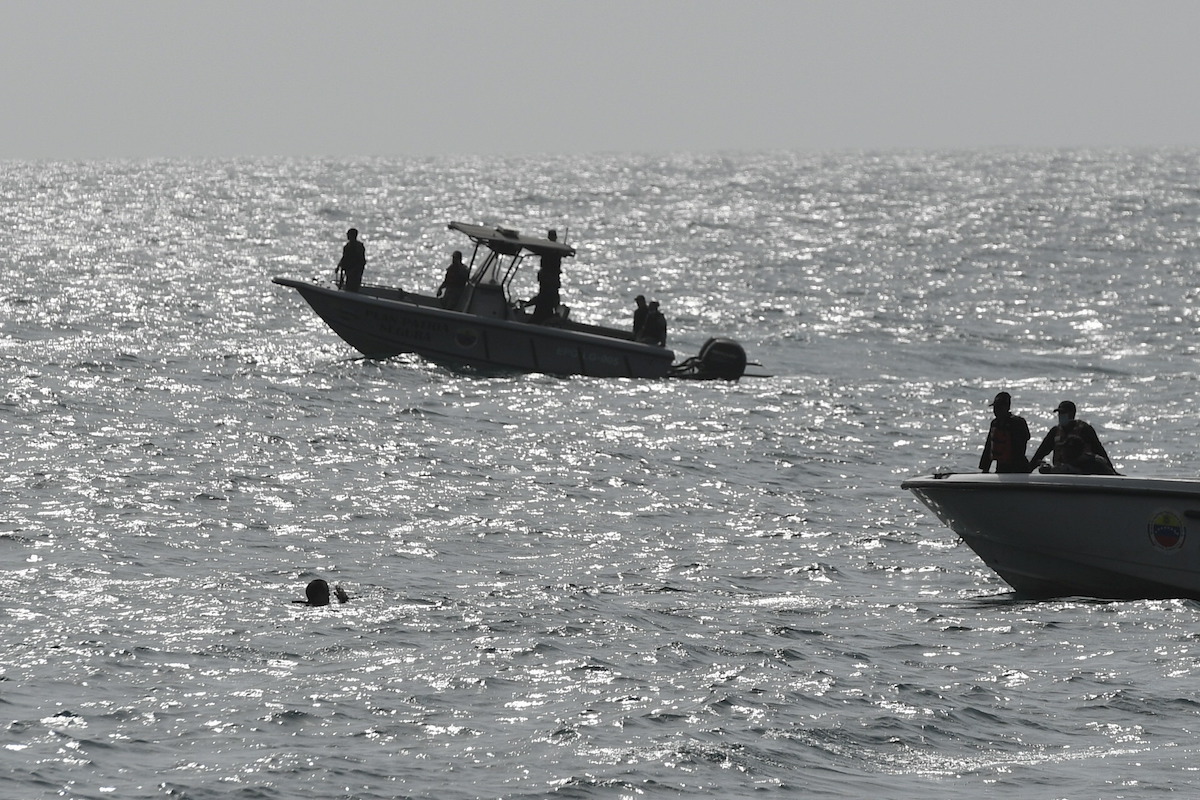 Security forces investigate near the shore in the port city of La Guaira, Venezuela, Sunday, May 3, 2020. (AP Photo/Matías Delacroix)

“I’ve tried to engage everybody I know at every level,” Goudreau said of the attempt to help his detained colleagues. “Nobody’s returning my calls. It’s a nightmare.”

Kay Denman, the mother of one of the Americans, said the last time she heard from her son was a few weeks when he texted her from an undisclosed location to ask how she was coping with the coronavirus pandemic. She said she never heard her son discuss Venezuela and only learned of his possible capture there after his friends called when they saw the reports on social media.

“The first time I heard Jordan Goudreau’s name was today,” she said when reached at her home in Austin, Texas.

Goudreau has said he signed a contract with the U.S.-backed Venezuelan opposition leader Juan Guaidó to overthrow Maduro, which Guaidó has denied. The opposition leader said he had nothing to do with Sunday’s raid.

Goudreau says Guaidó never fulfilled the contract, but the former Green Beret pushed ahead with an underfunded operation with just 60 fighters, including the two U.S. veterans.

He said he last communicated with Denman and Berry when they were adrift in a boat “hugging” the Caribbean coast of Venezuela. They were still in their boat following an initial confrontation with the Venezuelan Navy early Sunday, he said.

“They were running dangerously low on fuel,” Goudreau said. “If they had gone onto landfall, they would have gone to a safe house.”

Goudreau said the two were waiting for a boat on the Caribbean island of Aruba with emergency fuel to help extract them.

He was identified as a National Guardsman Capt. Antonio Sequea, who participated in a barracks revolt against Maduro a year ago. Goudreau said Sequea was a commander working with him in recent days on the ground in Venezuela.

Maduro ally and Attorney General Tarek William Saab said that in total they’ve arrested 114 people suspected in the attempted attack and they are on the hunt of 92 others.

Goudreau, a three-time Bronze Star U.S. combat veteran, claims to have helped organize the deadly seaborne raid from Colombia. Goudreau said the operation had received no aid from Guaidó or the U.S. or Colombian governments. 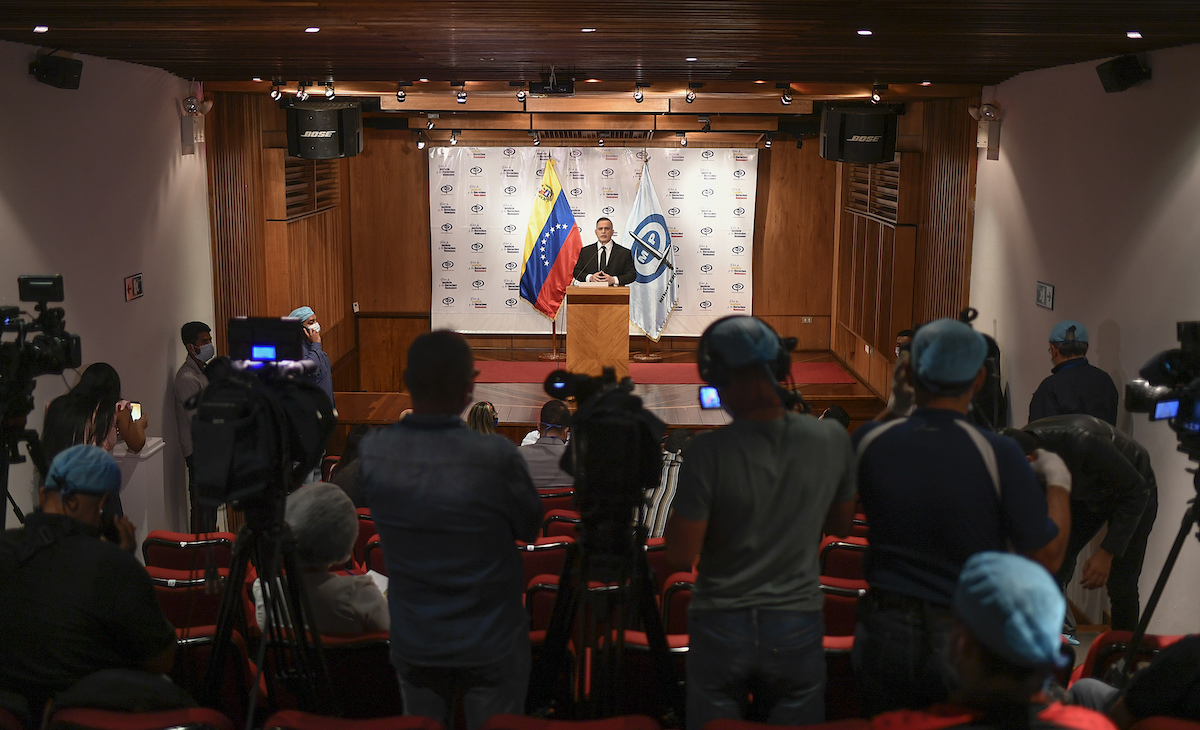 Opposition politicians and U.S. authorities issued statements suggesting Maduro’s allies had fabricated the assault to draw attention away from the country’s problems.

Goudreau said by telephone earlier Monday that 52 other fighters had infiltrated Venezuelan territory and were in the first stage of a mission to recruit members of the security forces to join their cause.

An AP investigation published Friday found that Goudreau had been working with a retired Venezuelan army general —who now faces U.S. narcotics charges— to train dozens of deserters from Venezuela’s security forces at secret camps inside neighboring Colombia. The goal was to mount a cross-border raid that would end in Maduro’s arrest.

One response to “Venezuela: 2 US ‘Mercenaries’ Among Those Nabbed After Raid”