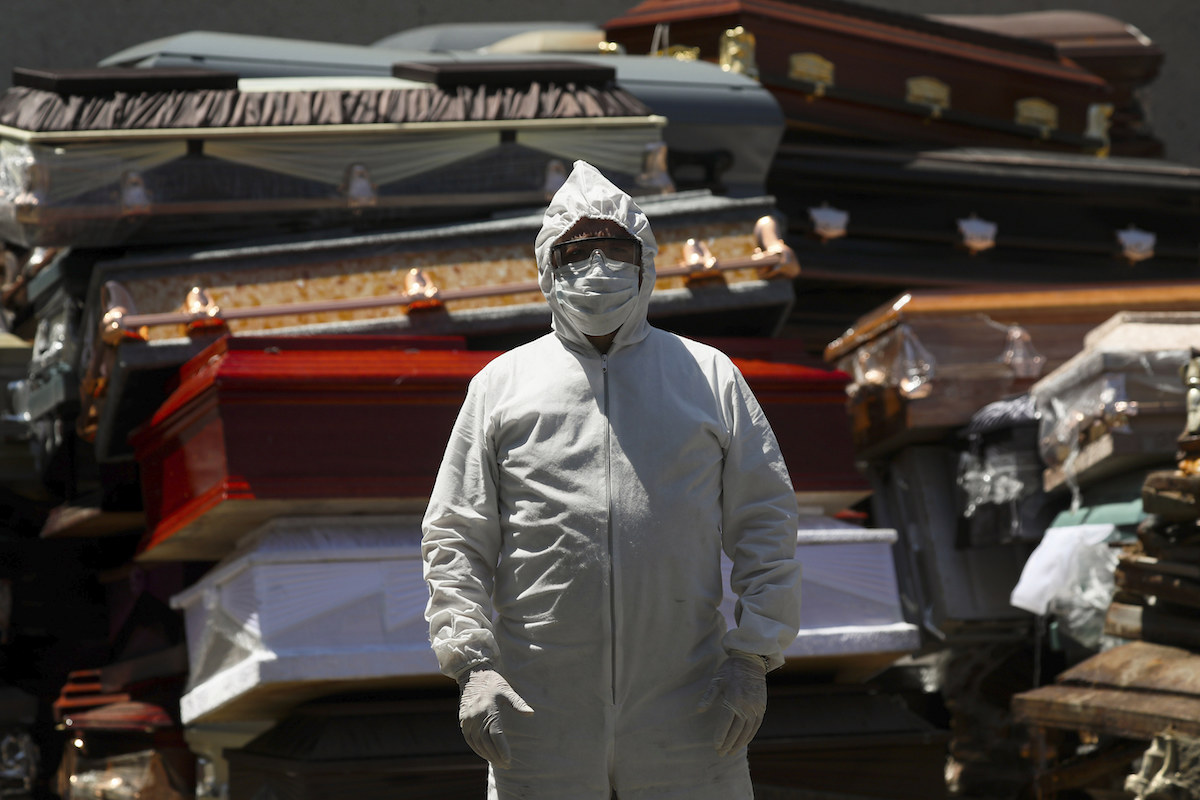 An employee of Xochimilco’s crematorium waits for a corpse, suspected to have died of the new coronavirus, in Mexico City, Monday, May 4, 2020. He is standing next to pile of discarded coffins that contained people who died of COVID-19 disease, and are waiting to be destroyed at the site. (AP Photo/Fernando Llano)

MEXICO CITY (AP) — A registry of death certificates in Mexico City suggests there were 4,577 cases where doctors mentioned coronavirus or COVID-19 as a possible or probable cause of death, more than three times the official death toll in the city.

The federal government acknowledges only 1,332 confirmed deaths in Mexico City since the pandemic began, less than a third as many as the investigation revealed.

The anti-corruption group Mexicans Against Corruption said in a report Monday that it got access to a database of death certificates issued in Mexico City between March 18 and May 12. It showed that in explanatory notes attached to 4,577 death certificates, doctors included the words “SARS,” “COV2,” “COV,” “COVID 19,” or “new coronavirus.”

The virus’ technical name is SARS-CoV-2. The notes the group counted included terms like “suspected,” “probable,” or “possible” role of the virus in the deaths. In 3,209 of the certificates, it was listed as a suspected contributing factor along with other causes of death, like pneumonia, respiratory failure, septic shock or multiple organ failure. 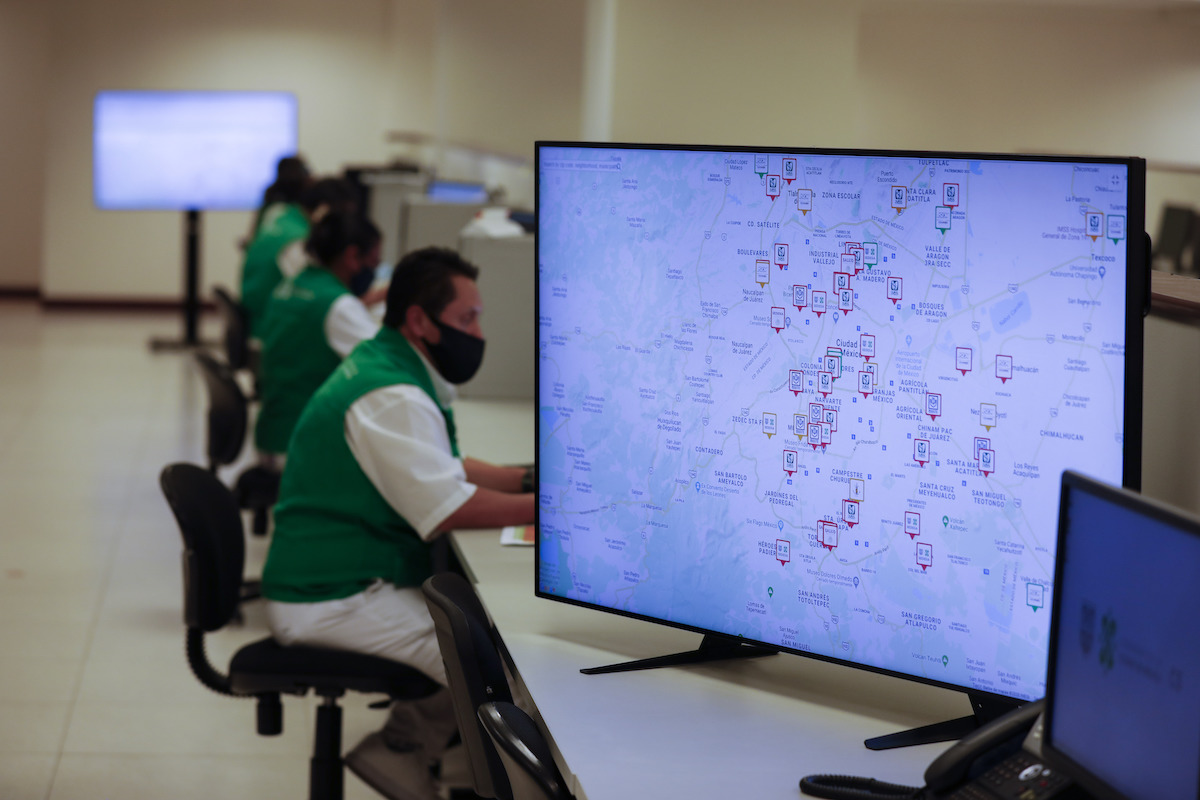 A map, with most hospitals marked in red to show they are already at capacity, displays information about which hospitals in Mexico’s hard-hit capital still have space to accept COVID-19 patients, as workers from the Ministry of Health make round-the-clock updates to the database in the C5 emergency operations center in Mexico City, Friday, May 15, 2020. (AP Photo/Rebecca Blackwell)

The group did not say how it accessed the database, which was kept by local courts. But it noted that official counts showed only 1,060 coronavirus deaths during that March 18-May 12 period.

Mexico City Mayor Claudia Sheinbaum has acknowledged there are more deaths than have officially been reported, and has said a special team of epidemiologists will review the death figures.

“What we are saying now is that in addition to those with a positive COVID test, are there more? Yes, there are more,” Sheinbaum said Tuesday. “When is that going to be made public? According to Mexican standards, this will definitely have to happen and there will be total transparency, but we have to comply with the standards concerning the review of the medical certificates.”

Mexico performs relatively few tests; only about 150,000 have been carried out so far in a nation of about 125 million people. Federal officials acknowledge some victims have died without being tested and have pledged that cases in which death certificates mention coronavirus as a possible or probable cause of death will eventually be added to official death toll. But they have suggested those “suspected” cases were only about a tenth of test-confirmed deaths.

President Andrés Manuel López Obrador has reacted angrily to new reports in the past that claimed Mexico was undercounting its deaths on the federal level, and the anti-corruption group’s report was unlikely to please him. He has criticized the group the past for allegedly opposing his policies and representing business interests. He has mockingly called it “Mexicans For Corruption.” 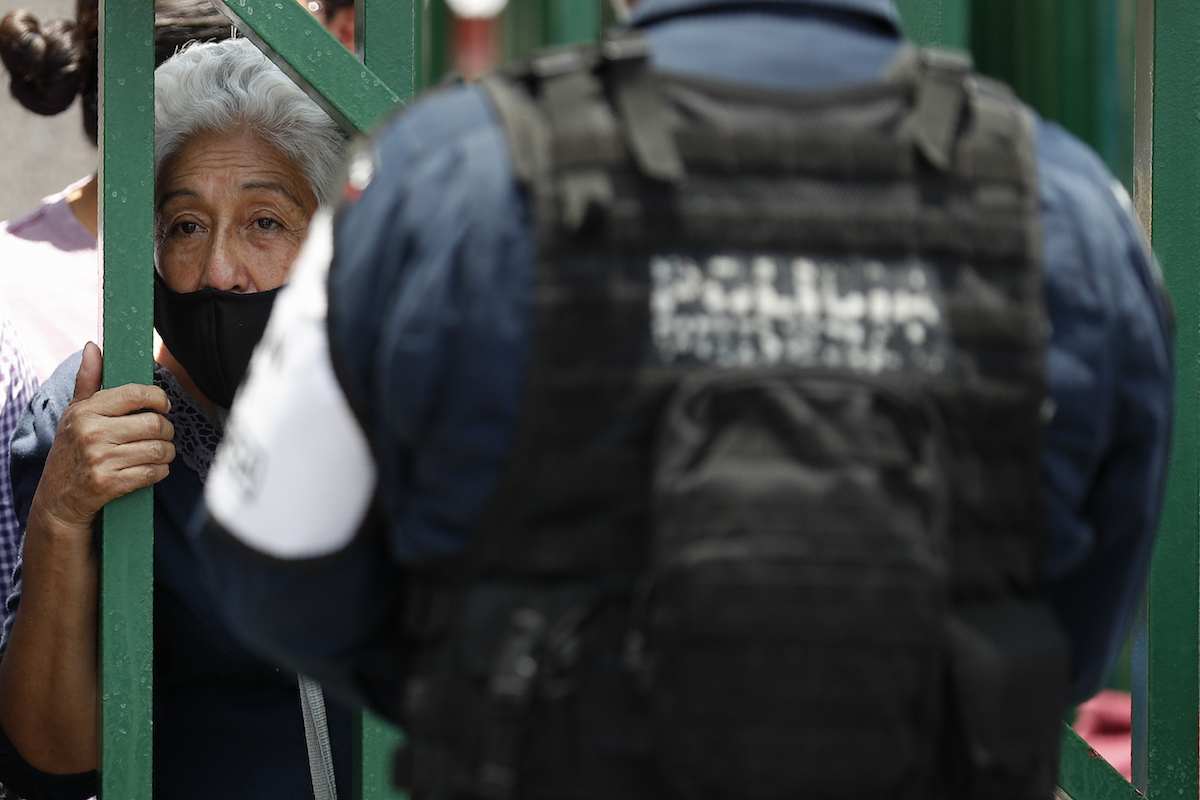 A woman peers through the gates of a public hospital treating both COVID-19 and other patients, as she tries to get information about a hospitalized loved one, in the Iztapalapa district of Mexico City, Tuesday, May 5, 2020. (AP Photo/Rebecca Blackwell)

Sheinbaum repeated that mocking term Tuesday and claimed there were efforts to create a split between her administration and the federal government. Both she and López Obrador belong to the Morena party.

The group’s founder is Claudio X. González, a lawyer, activist and the son of a prominent business magnate.

Mexico City, with about 9 million residents, has been the worst hit part of the country. The additional 3,245 deaths in Mexico City, if they are confirmed or added to official counts, would push the national death toll from the 5,332 reported by federal officials Monday to 8,577.