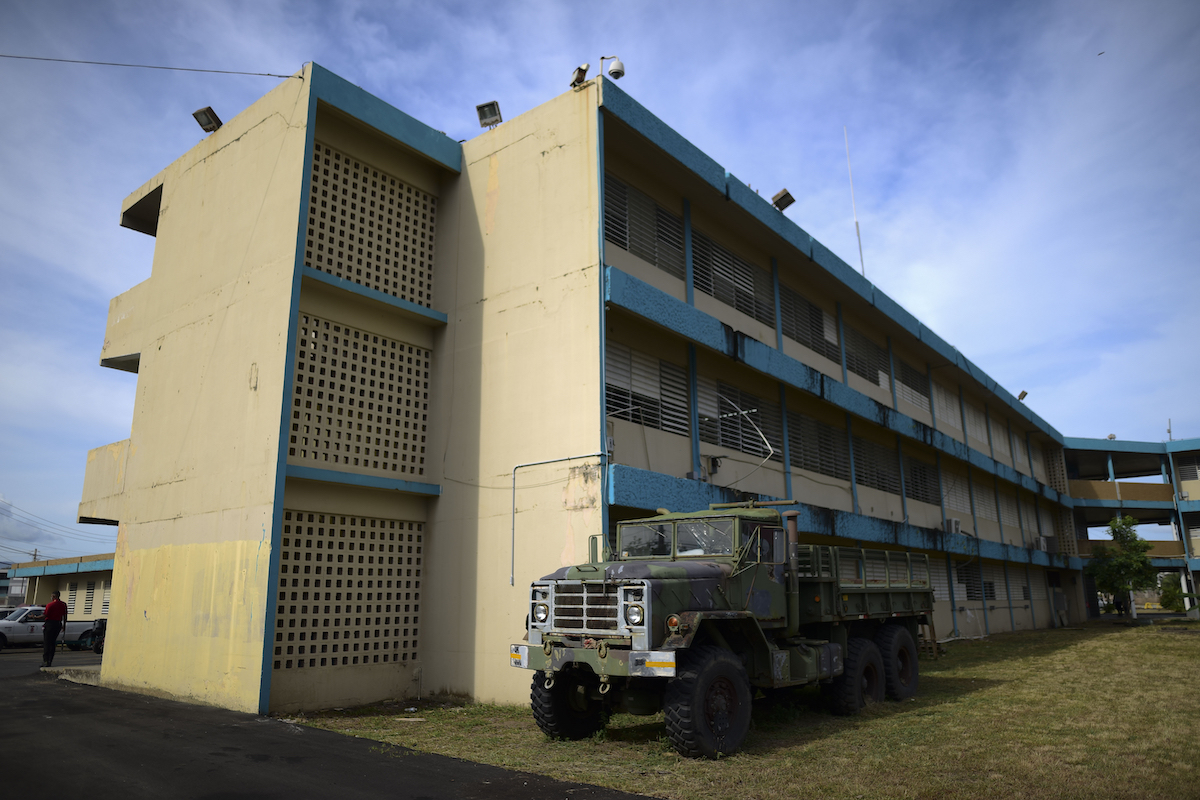 An old military truck used during flooding sits parked at the Carlos Escobar López vocational school, which will be used as a shelter during this year’s hurricane season in Loíza, Puerto Rico, Thursday, May 28, 2020. (AP Photo/Carlos Giusti)

Caribbean islands have rarely been so vulnerable as an unusually active hurricane season threatens a region still recovering from recent storms as it fights a worsening drought and a pandemic that has drained budgets and muddled preparations.

“It is crazy,” said Iram Lewis, Bahamian minister for Disaster Preparedness, Management and Reconstruction. “No one could have imagined this.”

An estimated three to six major hurricanes could form this year as part of a total of 13 to 19 named storms that are forecast for the June 1 to Nov. 30 season, according to the National Oceanic and Atmospheric Administration. An average season generates 12 named storms with 3 major hurricanes.

The dire forecast comes at a particularly trying time for the Caribbean. Thousands of people overall lost their homes in southern Puerto Rico because of recent strong earthquakes and in the northern Bahamas because of Hurricane Dorian, which hit September 2019 as a Category 5 storm, killing an estimated 70 people and leaving hundreds missing. Demolition on both islands hadn’t even started in some areas when the pandemic hit and lockdowns ensued, causing billions of dollars in economic losses in one of the world’s most tourism-dependent regions.

As a result, governments are struggling more than ever to prepare for a season that started early: Tropical Storm Arthur formed in mid-May and dropped rain on Dorian-battered islands in the Bahamas before heading out to sea. 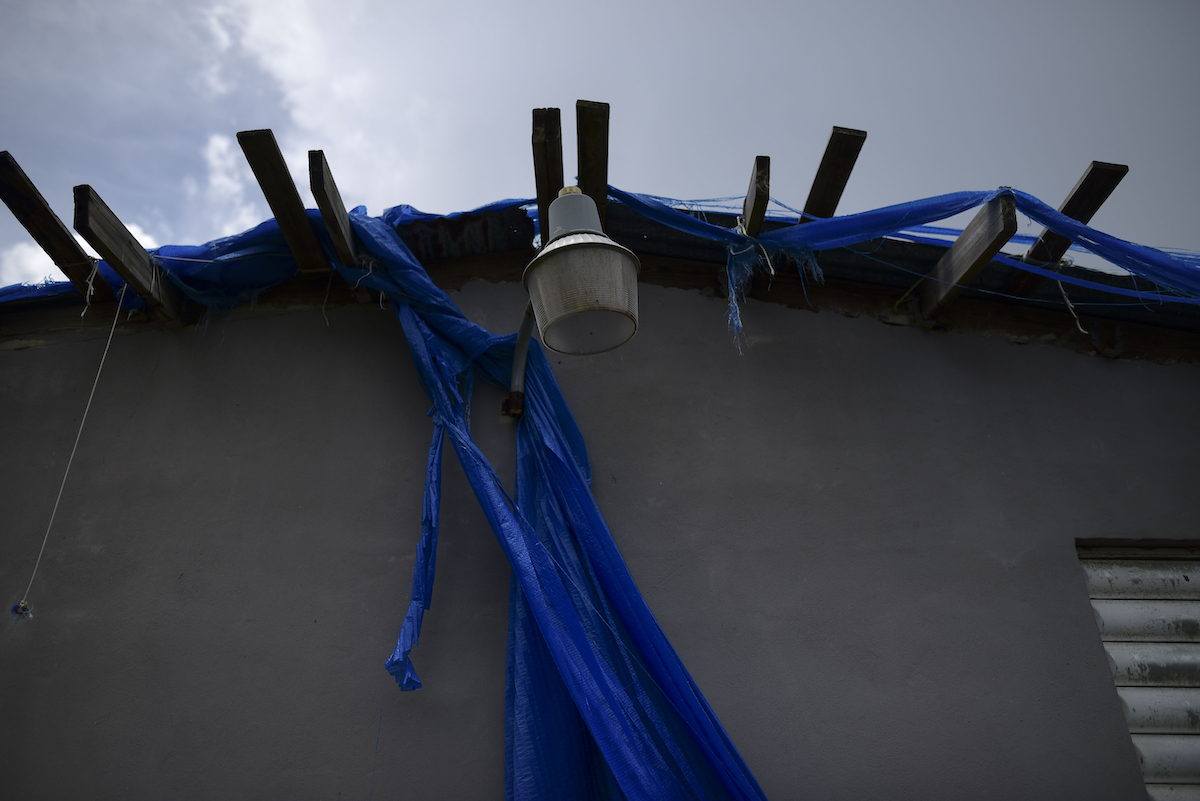 The home of 85-year-old Carmen Lacén, not habitable after Hurricane Maria, is covered by a torn, blue tarp, commonly used after the passage of storms, in Loíza, Puerto Rico, Thursday, May 28, 2020. (AP Photo/Carlos Giusti)

The response to COVID-19 has dried up government funds and lockdowns have delayed hurricane preparations, especially the identification of sufficient shelters given the pandemic.

In the Bahamas, the government will place families in classrooms instead of preparing large gymnasiums like they did with Hurricane Dorian, Lewis said. But that’s not an option for some mayors in Puerto Rico, where dozens of schools in the island’s southern region were permanently shuttered after a 6.4-magnitude quake and heavy aftershocks, with more than 70 families still staying in hotels as the search for housing continues.

The shuttering of schools means less shelters at a time when more space is needed to avoid a possible second wave of coronavirus cases.

Santos Seda, mayor of the southern coastal town of Guánica, said the quakes damaged or destroyed six schools, leaving only one operational for a shelter if needed. In addition, more than 400 structures still have to be demolished, something that worries him greatly.

“If a hurricane comes, there’s no doubt they can turn into projectiles,” he said.

The U.S. territory has not released a final list of shelters, and there are still people living with blue tarps as roofs since Hurricane Maria hit in September 2017 as a Category 4 storm, said Ariadna Godreau, a human rights attorney and executive director of Ayuda Legal Puerto Rico.

The government estimated several months ago that more than 20,000 blue roofs remained across the island, but neither housing officials nor the U.S. Federal Emergency Management Agency could provide updated numbers. 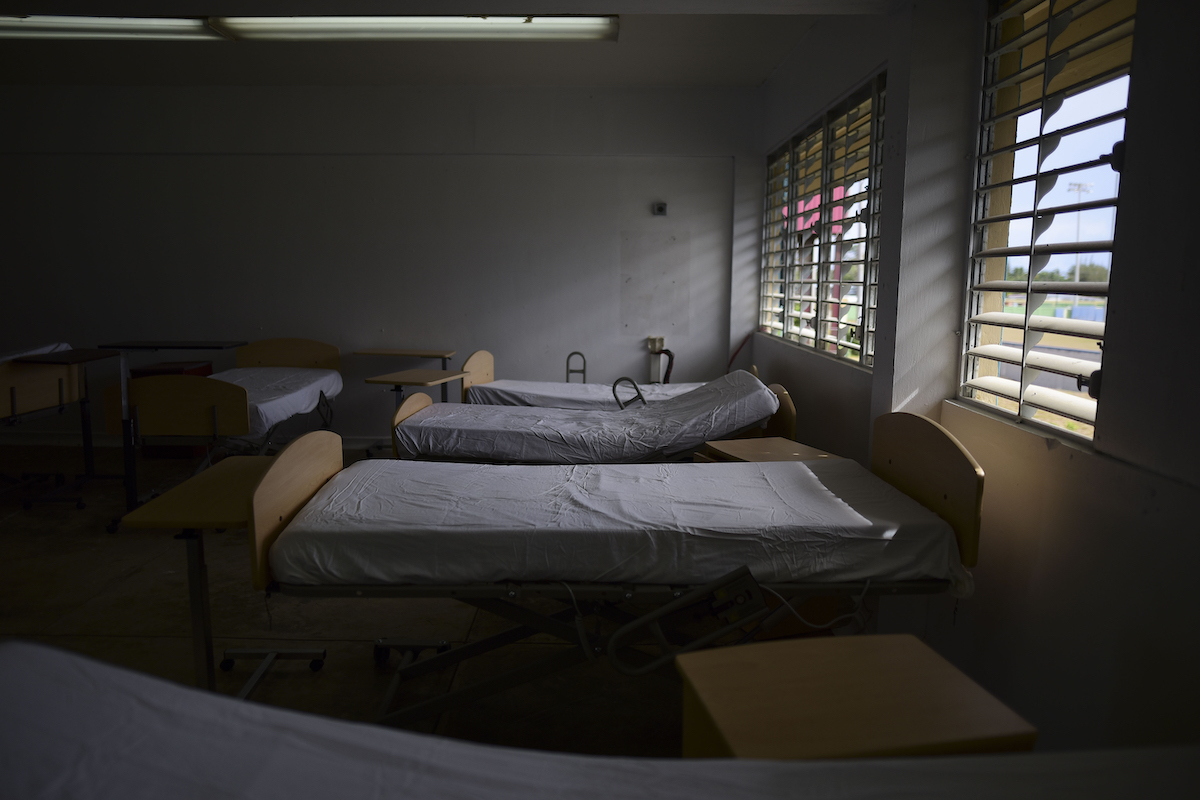 Beds fill a classroom at the Carlos Escobar Lopez vocational school which will be used as a shelter during this year’s hurricane season in Loíza, Puerto Rico, Thursday, May 28, 2020. (AP Photo/Carlos Giusti)

Among those still waiting for their home to be repaired since Hurricane Maria is the mother of 63-year-old Maritza Santos. She said the wood-and-zinc roof blew away and that her elderly mother hasn’t received any help to replace it. They live together now and worry about the upcoming hurricane season because Santos’ home already flooded during Maria and her mother’s home is unlivable.

“I can’t talk about it because I get a knot in my throat,” Santos said. “It hurts my soul to see my mother’s home in that state.”

Another problem Puerto Rico and some other islands are facing amid the pandemic as they try to finalize hurricane preparations is a growing drought. Officials in Puerto Rico have warned of possible rationing measures if sufficient rain doesn’t fall, while the French Caribbean island of Guadeloupe recently imposed such measures and is distributing water to certain communities.

A cluster of thunderstorms that rolled past Puerto Rico on Thursday provided some relief, but it also reminded people of the vulnerability of the island’s electrical grid that Hurricane Maria destroyed. More than 70,000 power outages were reported as a result of the heavy rains, and many wondered what would happen during a tropical storm, let alone a hurricane. 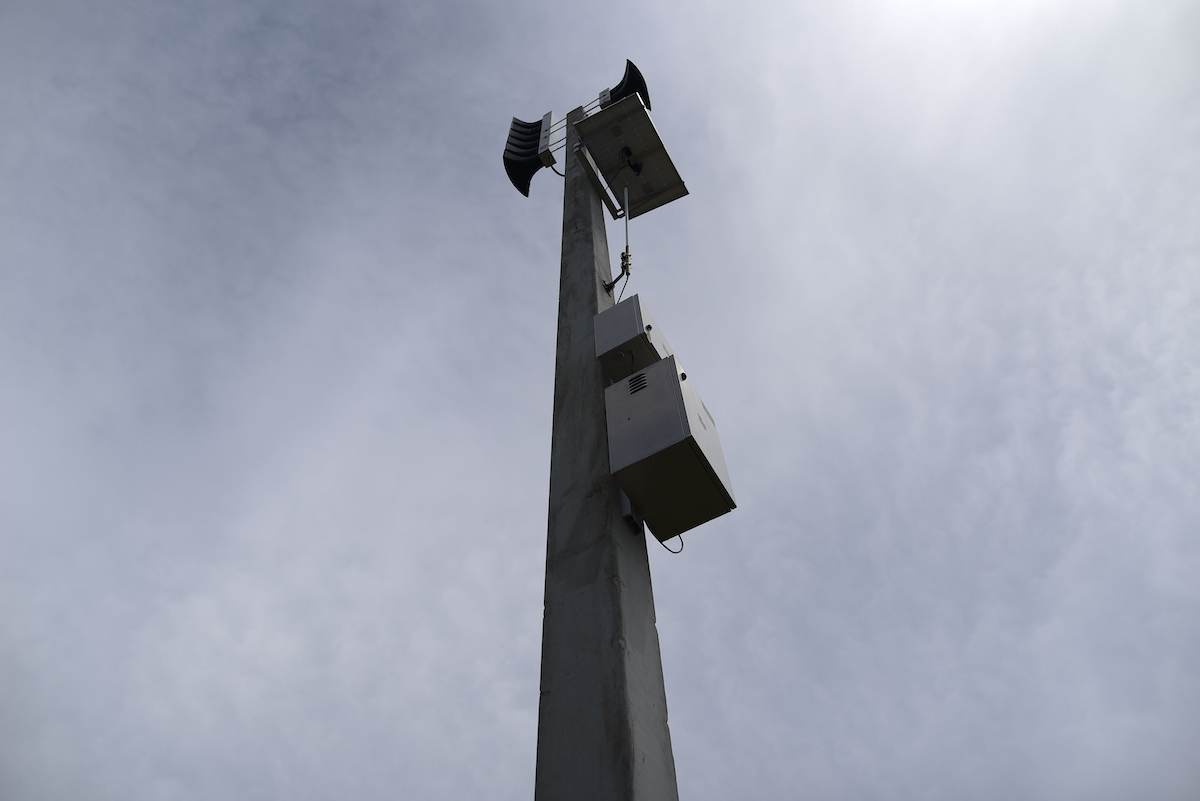 José Sepúlveda, director of transmission and distribution for Puerto Rico’s Electric Power Authority, said reconstruction of the grid hasn’t started, adding the process could take between 10 to 20 years. He acknowledged that frequent power outages are hitting the island and that the pandemic has delayed maintenance to the system that has not recovered from Maria even as a new hurricane season looms.

“There is a lot of hidden damage that hasn’t come to light,” he said.

One response to “Battered Caribbean Prepares for Hurricanes Amid Pandemic”