In Peru, Thousands of Faces at Mass: None Now Alive 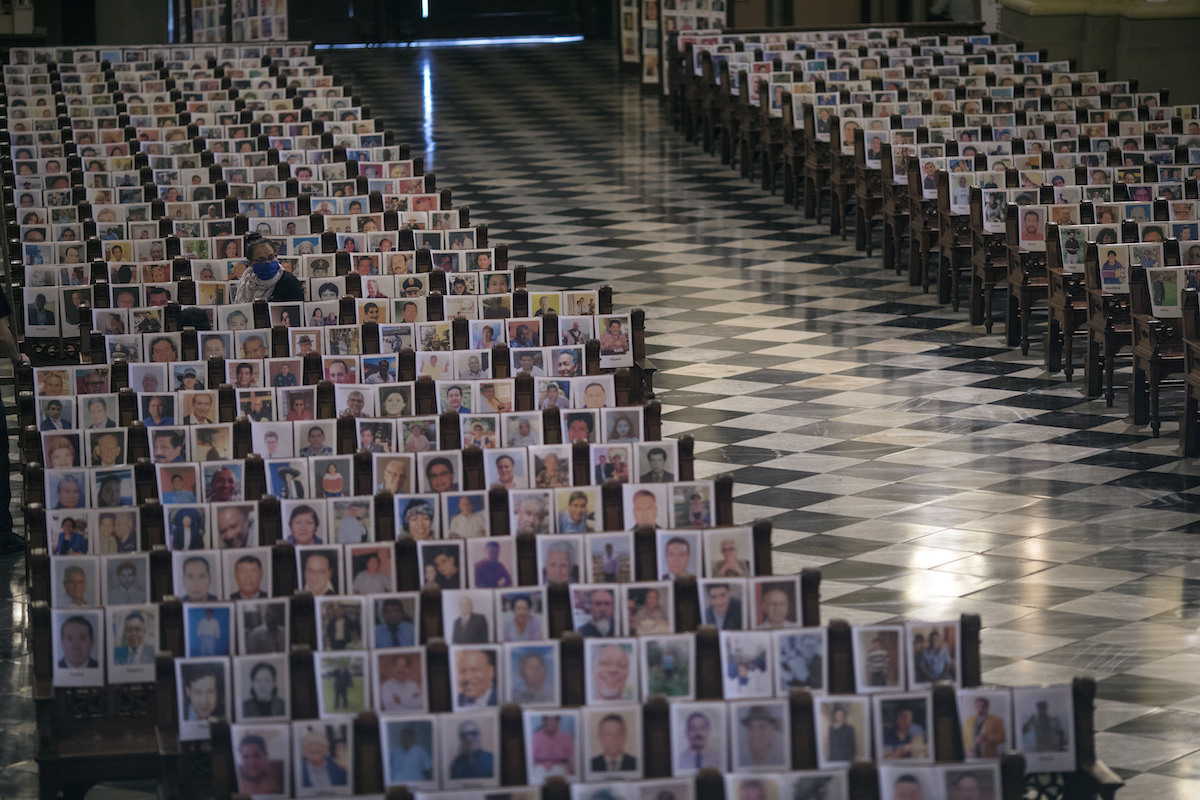 A woman sits among portraits of people who died due to the COVID-19, inside the Cathedral, in Lima, Peru, Saturday, June 13, 2020. (AP Photo/Rodrigo Abd)

LIMA, Peru (AP) — Archbishop Carlos Castillo on Sunday looked out over a cathedral full of faces—none of them now alive.

The cleric had his church filled with more than 5,000 portraits of those who have died in the pandemic that is burning across Peru and South America as a whole, using his broadcast homily to criticize a health system he said “is based on egotism and on business and not on mercy and solidarity with the people.”

COVID-19 has taken at least 6,400 lives in the nation of some 32 million people—a toll second only to that of Brazil within South America. 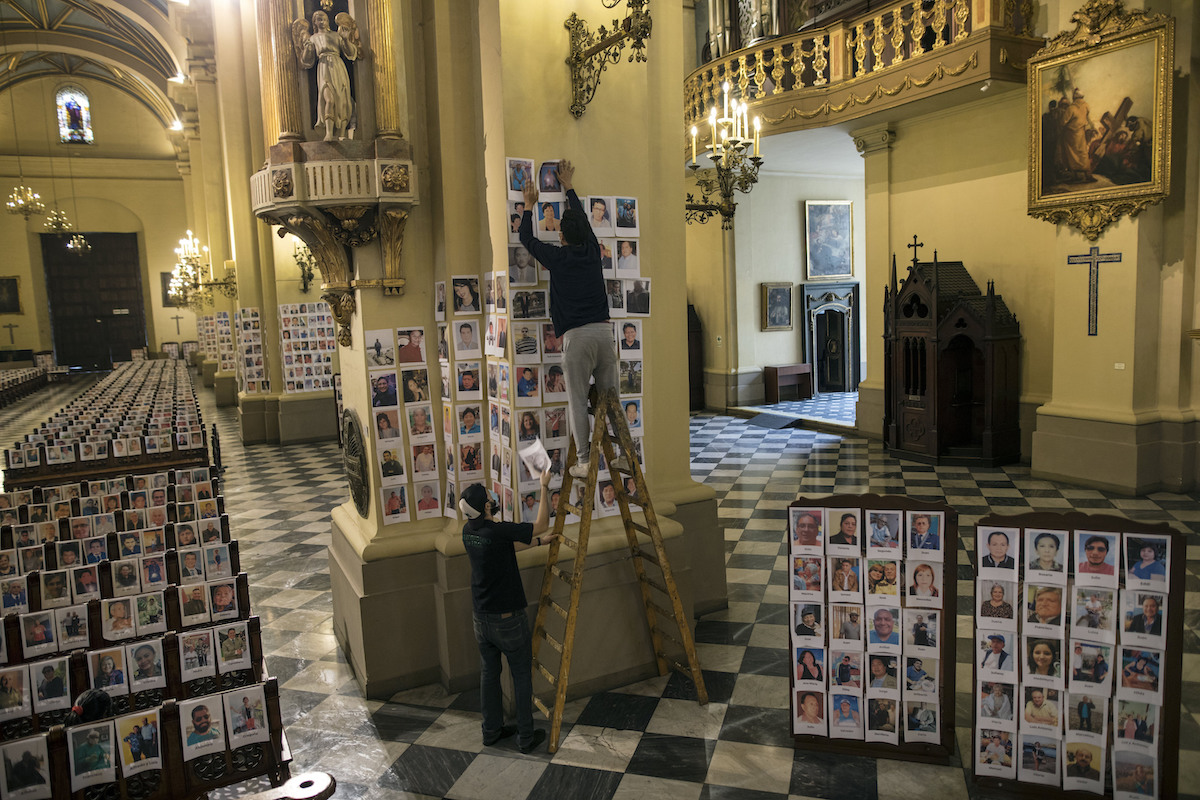 Workers stick portraits of people who died due to the COVID-19, inside the Cathedral, in Lima, Peru, Saturday, June 13, 2020. (AP Photo/Rodrigo Abd)

Hundred of them have died without receiving help from the health system, and many families have faced financial ruin due to the cost of trying to care for the ill. The nation as a whole faces a projected economic contraction of 12% this year, and Castillo called for solidarity with the poor.

“An even harder moment is coming,” he said. “It would be terrible if in the times to come we have thousands of these photos, but dead of hunger.” 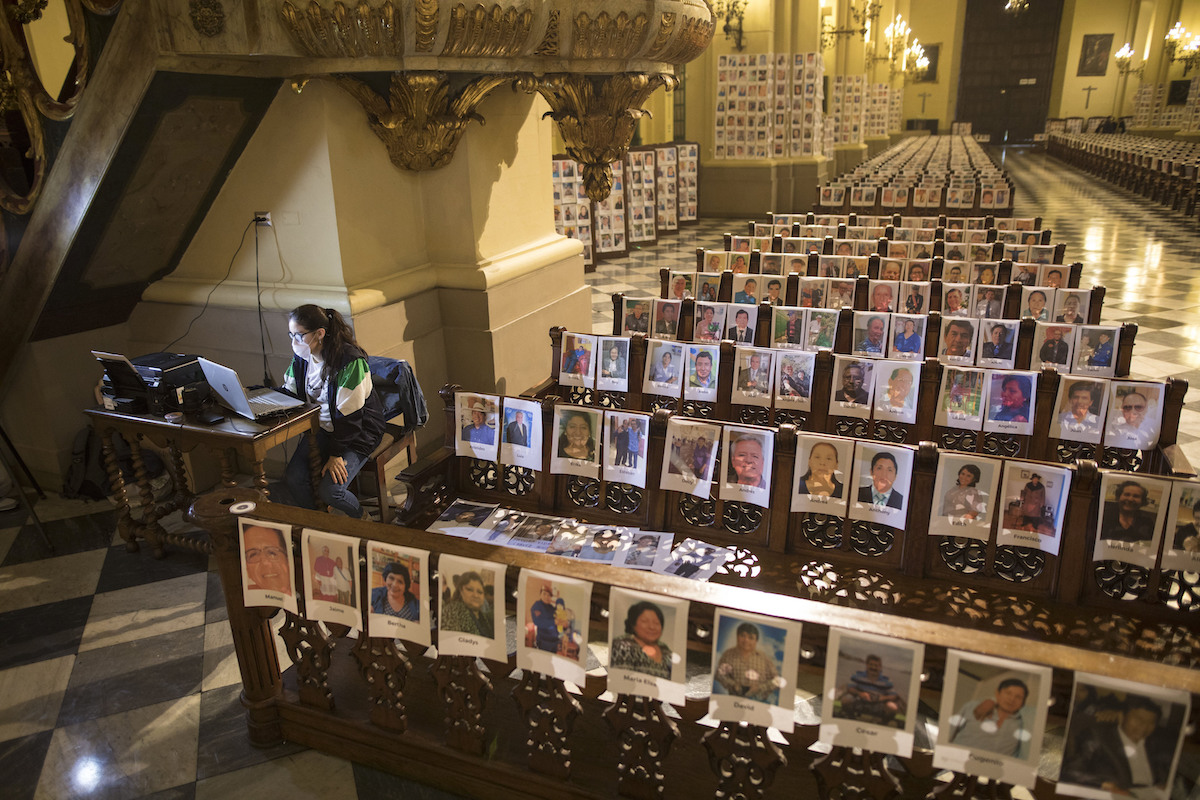 Camila Ronceros, part of the press team Lima’s archdioceses, prints portraits of people who died due to the COVID-19, inside the Cathedral, in Lima, Peru, Saturday, June 13, 2020. (AP Photo/Rodrigo Abd)

Church workers spent days filling the pews with images of coronavirus victims, and when the 84 pews were filled, the archbishop ordered thousands of photos more attached to the base of the columns that rise to the arched ceiling.

There were images of doctors, police, firemen and street sweepers, even an infant. Some hugged their grandchildren. A woman danced with her son.

One response to “In Peru, Thousands of Faces at Mass: None Now Alive”