Puerto Rico Questions Spain’s Legacy as Statues Tumble in US 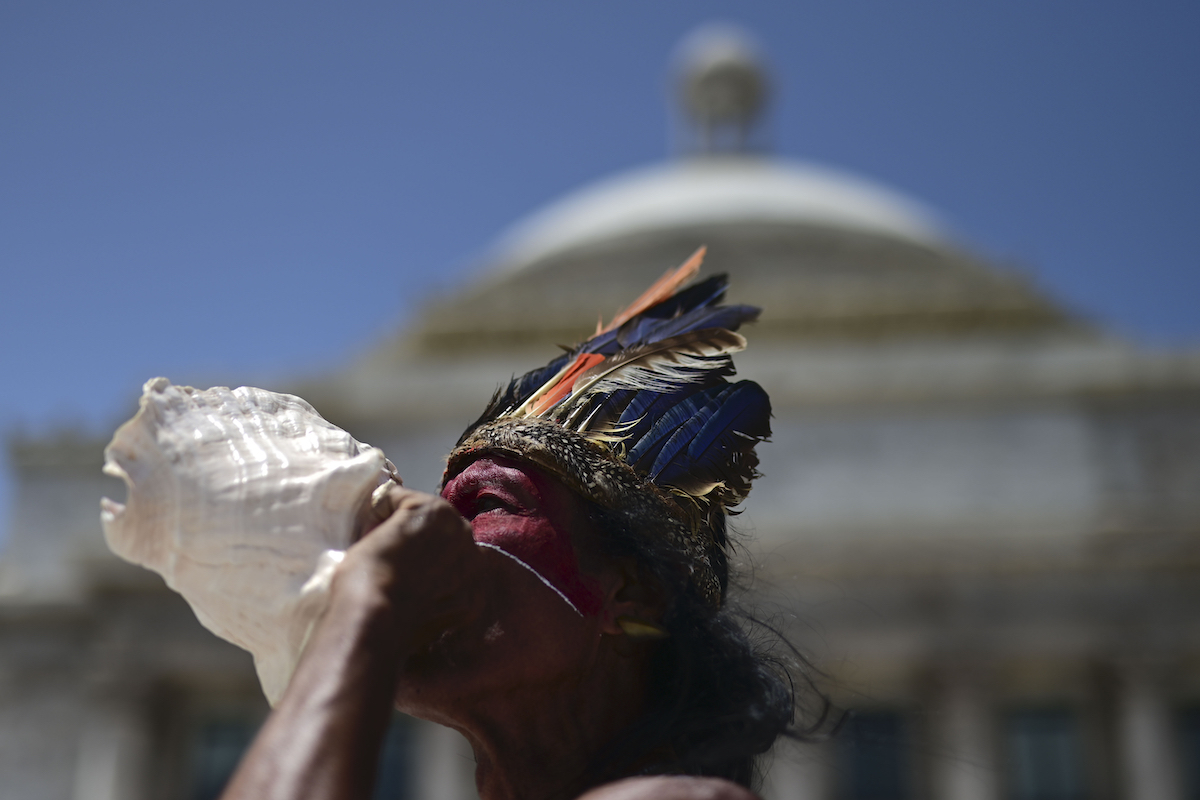 Baracutey blows on a conch shell outside the Capitol building while joining a group of activists demanding statues and street names commemorating symbols of colonial oppression be removed, in San Juan, Puerto Rico, Saturday, July 11, 2020. Dozens of activists marched through the historic part of Puerto Rico’s capital on Saturday to demand that the U.S. territory’s government start by removing statues, including those of explorer Christopher Columbus. (AP Photo/Carlos Giusti)

SAN JUAN, Puerto Rico (AP) — Statues, street names, plazas and even the body of conquistador Juan Ponce de León himself: Spain left a nearly indelible legacy in Puerto Rico that attracts hordes of tourists every year, but some activists are trying to erase it as they join a U.S. movement to eradicate symbols of oppression.

Dozens of activists marched through the historic part of Puerto Rico’s capital on Saturday, some wearing traditional Taíno clothing as they banged on drums and blew on conch shells to demand that the U.S. territory’s government start by removing statues including those of explorer Christopher Columbus.

“These statues represent all that history of violence, of invasion, of looting, of theft, of murder,” said an activist who goes by the name of Pluma and is a member of Puerto Rico’s Council for the Defense of Indigenous Rights. “These are crimes against humanity.”

Columbus landed in Puerto Rico in 1493 accompanied by Spaniard Ponce de León, who later became the island’s first governor and quelled an uprising by the native Taínos, a subgroup of the Arawak Indians. Historians and anthropologists believe that up to 60,000 Taínos lived in Puerto Rico at the time, but they were soon forced into labor and succumbed to infectious disease outbreaks.

Centuries later, local government officials honored both explorers by erecting statues and naming streets and plazas after them across Puerto Rico. The Columbus Plaza is located at the entrance of Old San Juan and bears a statue of Columbus unveiled in 1893 to celebrate the 400th anniversary of his arrival. Meanwhile, a nearby statue of Ponce de León stands facing south with his left hand on his hip and right finger pointed toward the first settlement he founded. The ruins still mark the spot of the island’s first Spanish capital and is a U.S. National Historic Landmark. The statue made of melted steel from British cannons also points in the same direction of the nearby San Juan Bautista Cathedral that bears Ponce de León’s remains and is a popular tourist spot. 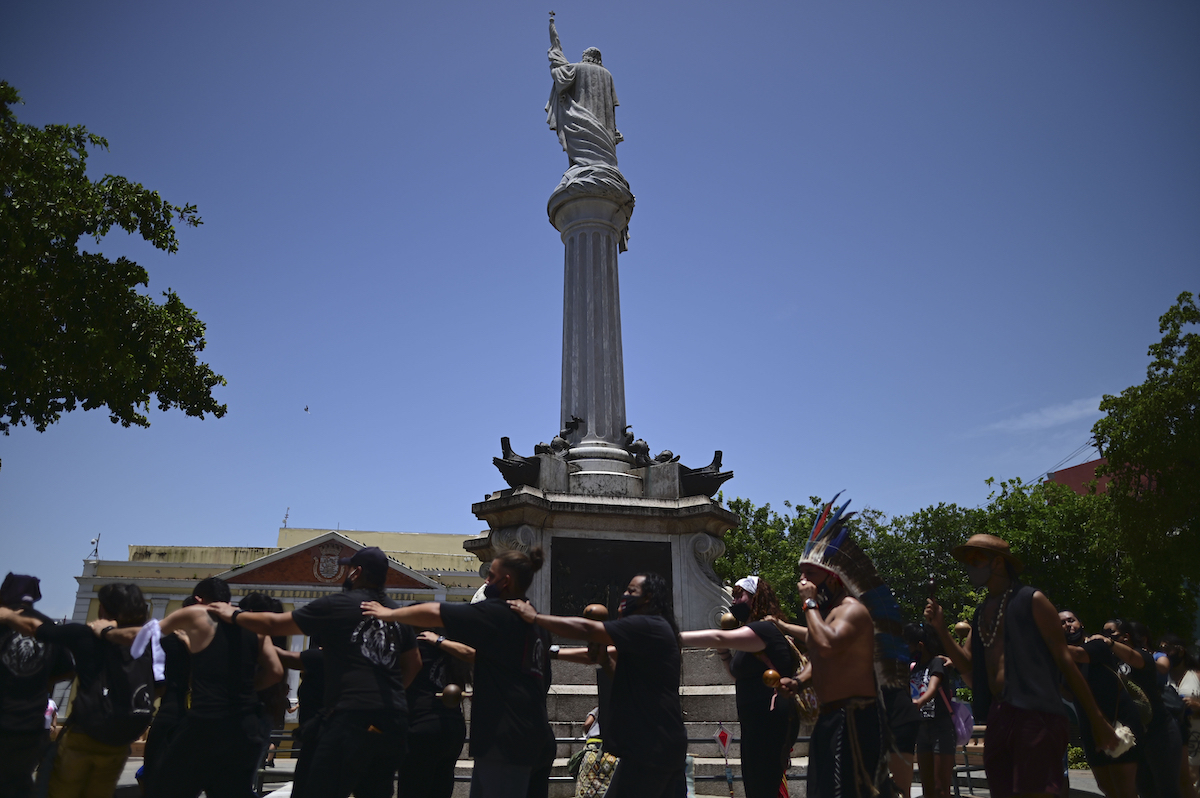 Activists on Saturday demanded that both statues be removed as the first step in taking down symbols of oppression across Puerto Rico.

“No, it won’t be easy,” acknowledged activist Francisco Jordán García, who helped organize the march. “It’s going to be a long process.”

But he quickly offered alternatives: “We can melt them and create a different statue of someone who truly deserves it.”

Activists recently contacted the office of San Juan Mayor Carmen Yulín Cruz and said an assistant told them officials would evaluate the cost of taking down the statues. A Cruz spokesman did not return a message for comment.

The march comes as Puerto Ricans’ interest in the territory’s indigenous past continues to grow. In the 2010 Census, some 42,000 of the 3.7 million people living on the island at that time identified themselves as at least partially Taino. 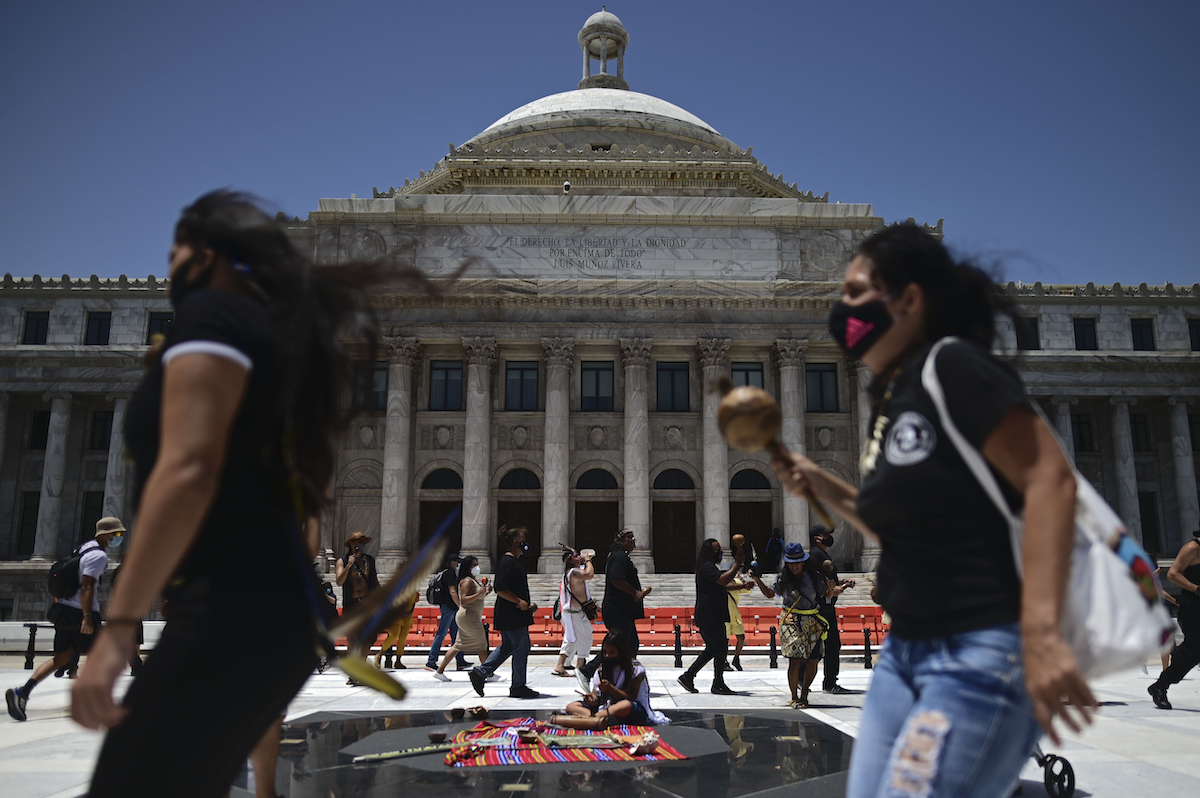 Statues of Columbus have been removed or toppled elsewhere in the U.S. mainland following an uproar over racism after the police killing of George Floyd. Protesters in Baltimore threw a Columbus statue into a harbor, while they beheaded another one in Boston. Meanwhile, officials in states including New York, Ohio, California, Missouri and Connecticut have removed similar statues.

However, one colossal statue of Columbus remains upright and rooted in U.S. soil. The creation, titled “Birth of a New World,” rises defiantly along Puerto Rico’s north coast, a 660-ton statue that is more than twice the size of the Statue of Liberty without its pedestal. It was once homeless for two decades as several U.S. cities refused to accept it for reasons ranging from cost to appearance until Puerto Rico’s government accepted it as a gift in 1998 and used $2.4 million in public funds to bring it to the island.