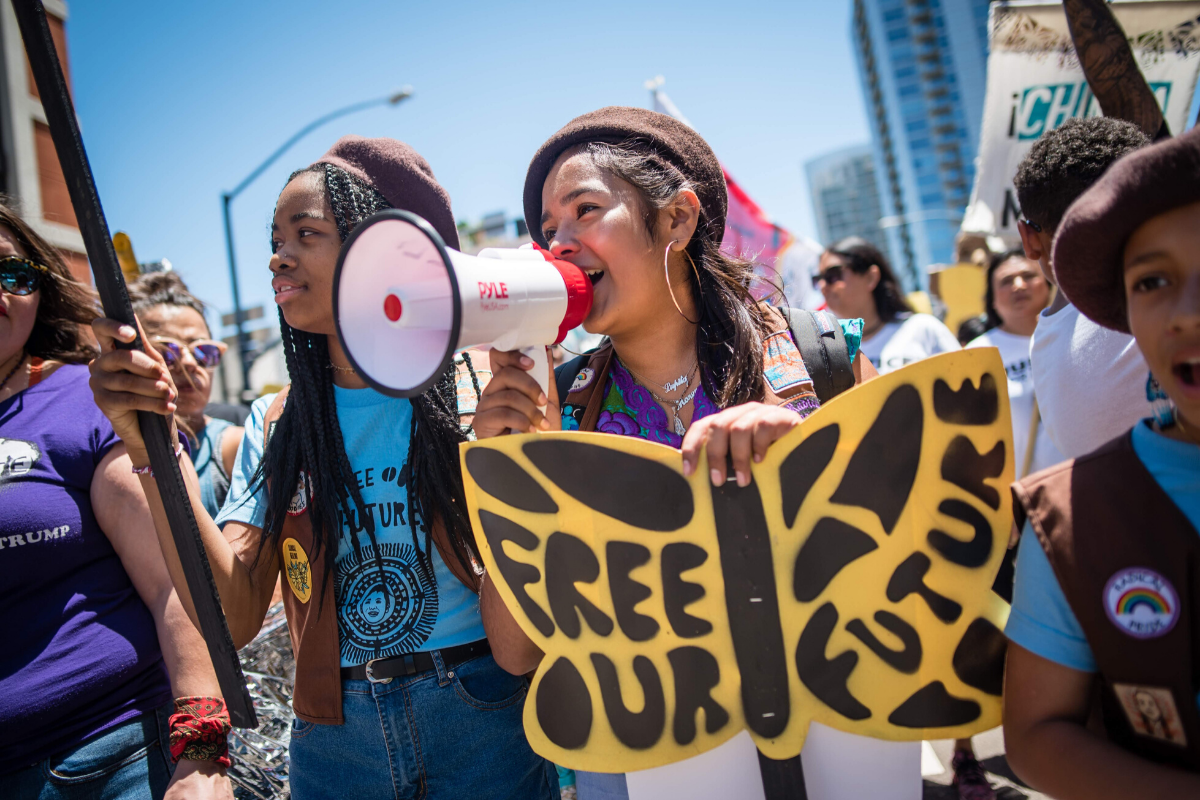 The George Floyd protests has made everybody look at this country’s ugly history with racism and confront the fact that America was pretty much built on racism itself. People are also realizing that the fight for racial justice is barely even over. At the end of the day, marching is fine, but if there’s no radical ideas and concrete organizing power, things will remain the same.

In comes the documentary We Are The Radical Monarchs. Making splashes at SXSW, Seattle and the San Francisco Film Festivals in 2019, the film directed by Linda Goldstein Knowlton follows the three-year journey of the Radical Monarchs, a group of young girls of color advocating and fighting for social justice. Whether they are clenching their fists high up in the air at a Trans Lives Matter march or wearing their brown berets and vests showcasing colorful badges like “Black Lives Matter” and “Radical Beauty,” the documentary offers real hope about a future generation of fierce Brown and Black girls ready to put in the work to make social justice more than just a dream.

But the road to building the Radical Monarchs from the ground up is no easy task. We meet the organization’s founders —two fierce, queer women of color Anayvette Martínez and Marilyn Hollinquest— as they face the challenge to grow the organization to different chapters across the country. They also have to deal with misogynistic comments from people online who think the girls are being indoctrinated with radical ideas (because who would want a just world!) and even Fox News commentators wishing the girls were taught how to sew instead.

We also learn the founders’ reasons for wanting to start the organization in the first place: it boils down to addressing and centering the experiences of all Brown girls, instilling pride —not shame— for their culture, identities. After all their mission is to “create opportunities for young girls of color to form fierce sisterhood, celebrate their identities, and contribute radically to their communities.”

The girls earn badges for completing units where they break down complex concepts, like the definition and significance of LGBTQ and Black Lives Matter, and the struggles experienced by people within those communities. What sets the Radical Monarchs apart from just being another children’s camp is that both Anayvette and Marilyn invite leaders to speak to the young girls—Alicia Garza, co-founder and Black Lives Matter and Isa Noyola, a Trans-Latina activist, have candid conversations about their motivations and what drives them to be advocates for social justice. The young girls get a firsthand look at why racial and social justice is imperative for the nation to protect their ideals and the communities they know as their own.

While both Anayvette and Marilyn want to bring the Radical Monarchs across the nation, they have to accomplish a Herculean task. They must secure funds to sustain their current chapter in Oakland, but also raise more money to bring chapters to other cities, hire leaders that would teach social justice units to the young girls, and all this happens while working a full time job and even take on more responsibilities, like being a mom in Anayvette’s case. 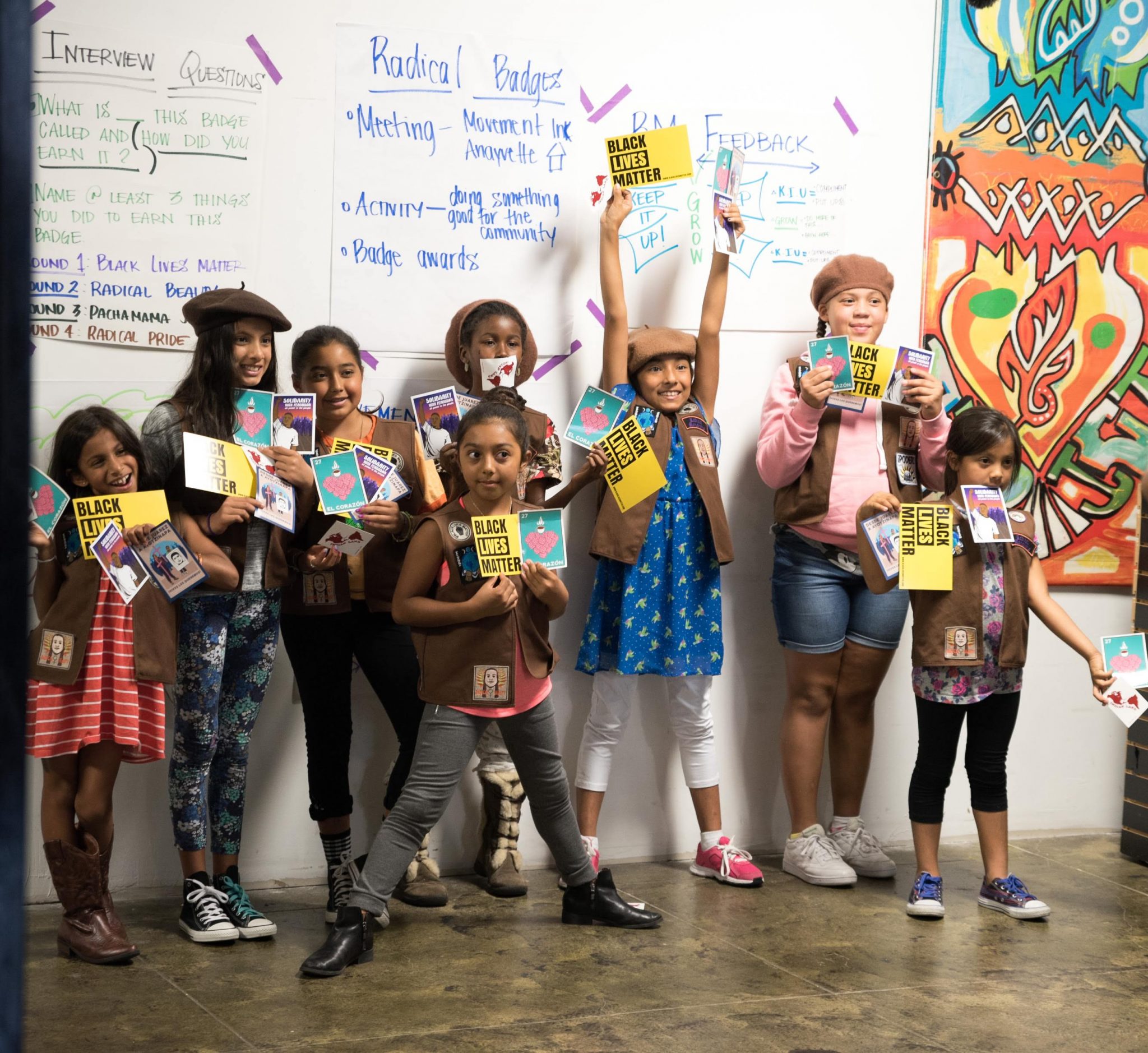 But it’s that passion, restless drive, and resilience that makes Radical Monarchs so powerful. Take Anayvette, for example. She admits to co-founding the organization because she wanted to reimagine what a social justice movement could be. While being editor-in-chief for UCLA’s news magazine “La Gente,” she repeatedly criticized the replication of patriarchy and homophobia within social justice movements. How can movements achieve their goals while also ignoring the hardships of women of color and those in the LGBTQ community at the same time? With Radical Monarchs, she envisioned a new way to introduce social justice initiatives to young girls of color, where they didn’t have to compromise. It’s about being more than just an ally for a particular community, you also have to put in the work for it. It’s all or nothing.

For Marilyn, who grew up in a very conservative Pentecostal family, the concept of choice and freedom was an almost far-fetched dream. She knew that she wanted to be somewhere else, somewhere she could attempt to figure out and carve out her true self—be the woman she wanted to be. It is especially poignant when we see her cry at the Radical Monarchs graduation. You can say it was emotional for two reasons: watching the first troop, girls she’s been following for three years, become confident in their own skin ready to be leaders, but also because they are a vivid reminder of the sacrifices one makes to render a world where anything is possible.

One of the most fascinating things about the documentary is that it takes place during the protests in Ferguson and the birth of the modern Black Lives Matter movement, the Flint water crisis, and the rise and eventual election of Donald Trump in 2016. It’s unnerving to revisit moments that feel like happened decades ago only to register that those events have only happened within the last decade—it’s almost like America has an ongoing identity crisis, not knowing who or what or why it is the way it is. And then you think about how you could possibly try to explain to young girls the concept of racism, injustice, the systemic racism wheel that keeps this country running. 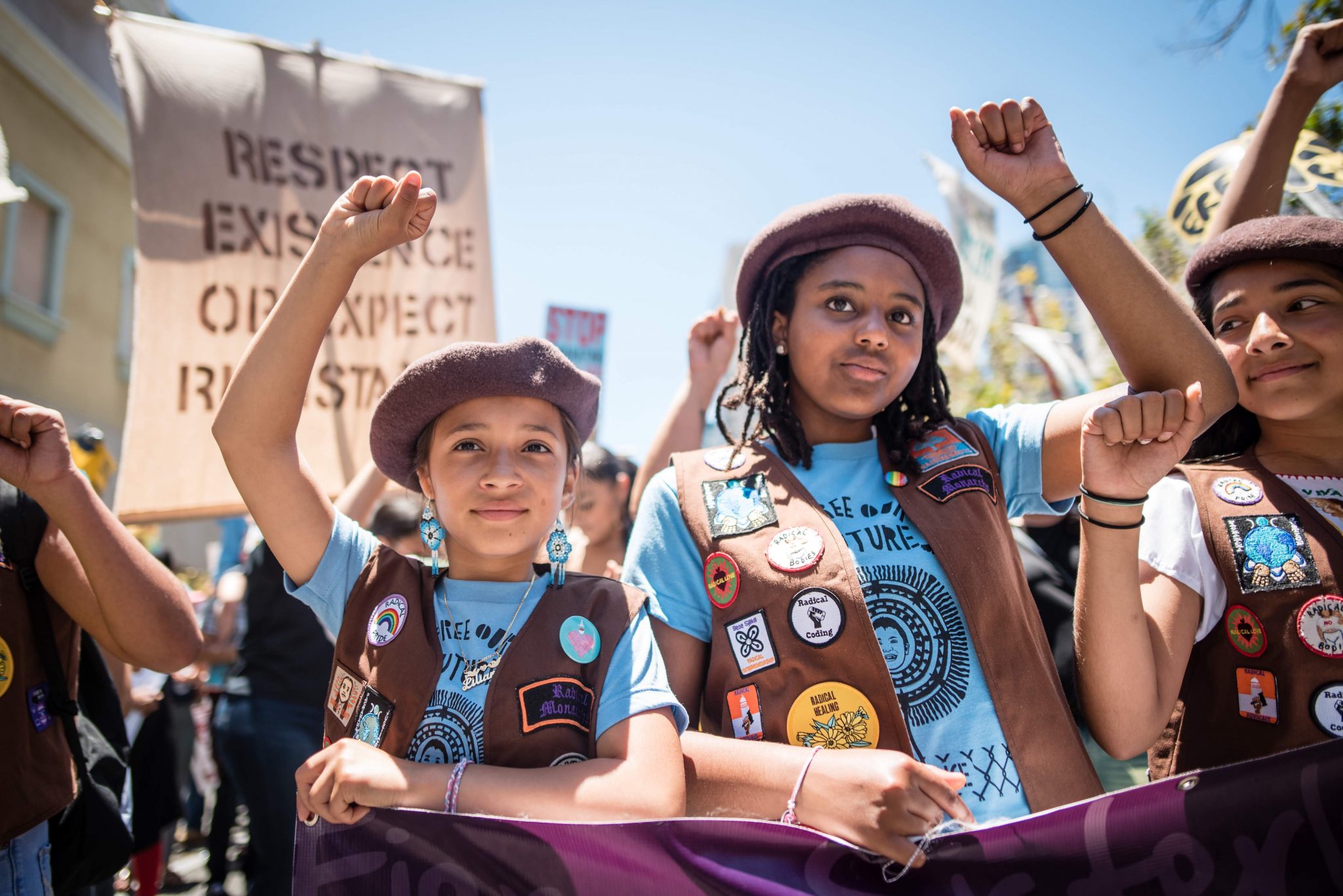 But I clearly underestimate a child’s understanding of sensitive issues. There’s a moment in the film where a girl says she is the only Black girl in her scouts group. That made her feel different, like she stood out in a bad way and she couldn’t relate to her peers. And then another girl speaks about the time other kids made fun of her skin color. Moments like these are not overbearing —and thankfully there’s no trauma porn here— but we do get a broad picture of the ways in which these girls experience passive and aggressive racism. It highlights how the Radical Monarchs functions as both a support system where your fellow sisters can be there offering you a shoulder to cry on, but also a place where you can build for change.

The young protagonists in We Are The Radical Monarchs are a clear representation of the power of the people. They are smart, prove to understand the true meaning of allyship, and are willing to fight for their communities. They are a clear indication that the prowess and success of modern social justice movements rest in the hands of fierce Brown and Black girls. I wouldn’t have it any other way.

You can see the documentary when it airs for the first time tonight at 9pm on PBS as part of their POV series. Find more info here.