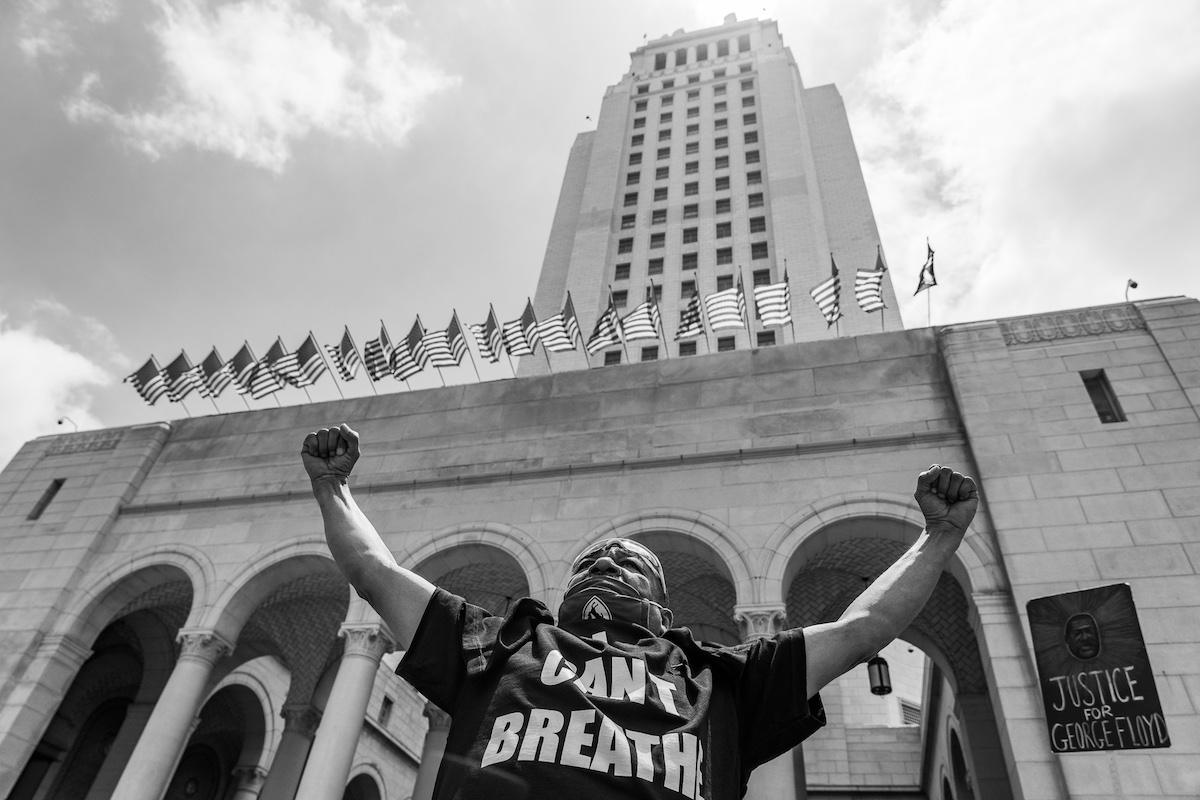 A Latino man yells “No puedo respirar, mamá” on the steps of L.A’s City Hall on Saturday June 6, 2020. (Photo by Francisco Lozano/Latino Rebels)

LOS ANGELES — In November 2016, the world found itself reeling in shock and disappointment​ that an anti-intellectual, openly racist talk show host could clinch the hearts and minds of a decisive portion of the electorate to seize the White House. From New York to Los Angeles, newsrooms and editorial chiefs-of-staff across the U.S. conceded they largely failed to take seriously the power of race-baiting among the U.S.’s predominantly white “swing” voters and promised to be more comprehensive in their political coverage going forward. But four years later, with the threat of a second Trump term on the horizon, in Los Angeles, a clear unwillingness to condemn white supremacy from the ​L.A. Times​ shows just how much that ​intelligentsia​ still has to learn.

At the height of unrest in Minneapolis and later Los Angeles, when businesses shuttered and police sirens shrieked through nights of “curfew,” the ​L.A. Times​ published headlines decrying broken shop windows and damaged property, with photos of mostly Black and Brown Americans under arrest and awash in turmoil. Meanwhile, on all of the “big five” social media platforms, many saw a different story playing out: window-breakers and vandals were not simply random Black or Brown people, but more often masked, white agitators, so-called “anarchists” with professional training, and Trump supporters exploiting police forces spread too thin attacking unarmed protesters. From L.A. City Hall, Mayor Garcetti responded with armed forces to the overwhelmingly peaceful protesters, and once again exposed “democracy” in our city as little more than a poster-board term for government and police organization more ready to defend racial hegemony here than to supply local hospital workers with protective personal equipment in the fight against a global pandemic.

When it came to coverage of these events, or their retelling, scores of people “on the ground” relied on Twitter updates from citizen journalists ​such as the team at ​L.A. Taco​ and ​StreetWatch L.A.,​ and not on the ​L.A. Times​ reporting staff. The biggest reason for this is simply because of the ​Times’s​ reputation as an “objective” source, which most experts today agree is just a stand-in term for “coverage without reference to race.” Such coverage by default is not objective reporting for racialized groups, who consistently bear the brunt of police and state violence, but it also plays a major part to obfuscate officials’ roles in acts of violence against such groups.

Consider that Eric Garcetti was originally elected to office in 2013 by only 12.4% percent of L.A. county’s registered voters. ​Despite such a weak show of support, when protests in L.A. were blamed for damaged property, Garcetti became the commander of an LAPD force that arrested more than 2,700 unarmed civilians in three days, whom at one point were jammed by police into crowded buses at the height of the worst uncontained respiratory pandemic in over a century.

Garcetti’s mass arrests were an offense against the democratic ideals of free speech and the right to assembly in Los Angeles. ​But along with Michel Moore and Alex Villanueva —respectively official “chiefs” of the LAPD and the L.A. County sheriff’s department— and backed by Governor Gavin Newsom’s National Guard, Garcetti rebranded military law as “curfew.” As the city entered an otherwise undefined legislative realm during the unrest, this euphemization rather easily undermined any notion of democracy in America’s second largest city. Yet the curfew acted not just as a terror for youth, elderly and disabled citizens everywhere who had nothing to do with Black Lives Matter protests, but also as a restriction on all residents in L.A. County, whether in the city proper or in its suburban respites. The ​L.A. Times​ board needed to call this “curfew” out as unacceptable, but instead chose to mostly just “retell” the story, offering virtually no commentary on the larger implications of a military-police state abetted by a “curfew.” Similarly, during coverage of the unrest, the paper relied heavily on officials’ accounts and narratives over the events of the day, even as everyday citizens had far more evidence of aggressive tactics by the LAPD against them than vice versa regarding the danger posed.

Garcetti’s decision to disperse protesters in Los Angeles with SWAT teams and the National Guard also placed him in the same ideological camp of the president—despite any “liberal” status.​ The ​L.A. Times​ would thus not have been wrong to juxtapose the way in which whether officials wear red or blue ties, during civic unrest, the vast majority of them side with the state, and by extension, the state’s enforcement of white supremacy. Consider that just a few weeks before the civic unrest, the same ​L.A. Times ​board published a strong statement lambasting L.A. City Hall’s dirty corruption schemes as exposed by the FBI. Yet smothering protesters’ rights to free speech and assembly with batons and smokescreens was also a dirty corruption of every one of our constitutional rights. Is the editorial board waiting on the FBI for a green light to make a statement on this?

In any case, renouncing police brutality and white supremacy is not as hard as the editorial rooms may believe.​ Remember that the very phrase of “white supremacy” itself is not an attack on white people, just as “police brutality” is not an assault on individual police officers. These phrases are observed facts of the structural realities that continually marginalize and criminalize non-white communities in Los Angeles and cities across America. The numbers and stories and data on this have been relayed ad nauseam. Yet they still need to be referenced so long as they’re ​facts on the ground,​ including from L.A.’s largest paper.

It’s true that calling out such facts “on the ground” should prove difficult for a historically white-owned and white-led paper, ​especially considering that ownership for decades rested on the Chandler family, an anti-union and pro-white elite dynasty. But it’s for this same reason that acknowledgement of the facts on the ground will be even more fruitful for the paper’s future.

Recall for a moment that during the height of protests in Washington D.C., when the lights of the White House went dim, ​Trump and his allies tucked into a bunker, presumably hiding from the “thugs and rapists” –as the administration is fond to label non-white communities– too close to the gates of the White House. In fact, there were Black, white and more protesters assembled en masse for Black Lives Matter, and against policies that see mostly white men at both the lowest and highest levels of government consistently face almost no accountability for crimes against the public. In Los Angeles, a similarly multi-ethnic mass has spent the last few months organizing and pleading with officials, looking to have their concerns and proposals meaningfully addressed, only to find at nearly each turn elected officials who are unwilling to meaningfully commit to anti-racist policies and anti-racist budgets. This leaves only the “the fourth estate” to show leadership.

If newsrooms and editorial boards like those of the ​L.A. Times​ are serious about an informed populace for a democratic republic, ​they need to take an active position against the power structures threatening these ideals, including white supremacy. They must do so through anti-racism, including anti-racist stances in their coverage, in their opinion section, and in scrutiny of elected officials’ decisions when they support policies that reinforce racial hegemony. This is not just a matter of what’s been trending on Twitter, but the proven way to hold some of the most powerful actors in our cities and states accountable for their actions.

Taking a stance will not be entirely new or completely innovative, either.​ In Burlington, Vermont, for example, where the population is more than 85% white, the city recently declared racism a public health concern, which is a good starting point for policy. In turn, continuing to do the opposite, or to remain “objective,” has damaging effects, and only keeps the paper’s credibility and readership low, particularly with non-white communities, a grave concern given the majority non-white demographics of L.A. County. But the fact is that the paper’s low readership has well to do with the impoverishment faced by Black and Brown communities in Los Angeles; it’s not easy for a single mother, for example, to subscribe to the daily news when her first concern is food for the family and keeping a roof overhead. Yet she lives here, and the city depends enormously on her labor. Our paper needs to show it truly grasps this.

Again, it should be granted that actively addressing white supremacy each time it rears its head —​including in the actions of our local and national officials— is challenging and likely to turn some people away. But leaving this battle for scholars and communities of color to keep waging by themselves “on the ground” reeks of the indifference and elitism of the Chandler paper. Moreover, the distinction between “just policy” and policy in defense of racialized hegemony is as important in this election cycle as the distinction between “rebels” and the treasonous, pro-slavery armies they actually were during the Civil War.

Less than a century before that war, a small band of white men were written into the nation’s history books ​as courageous and impeccable “founding fathers” who freed “us” from tyrannic Redcoat soldiers, and who produced the laws of the land which govern millions of citizens to this day. It’s now self-evident that much was omitted from those history books, and that such omissions continue to have consequences. The ​L.A. Times​ can thus not afford to continue omitting the legacy of white supremacy from its coverage, just as it cannot afford to ignore the demands for equity made most recently by the paper’s​ ​Black​ and​ ​Latinx​ caucuses. In the same way that Joe Biden has been beckoned to do with his campaign, the paper’s leadership has more than a responsibility to stand in defense of a progressive and inclusive agenda, but an active interest in it; the future readership of the paper is still waiting to have its concerns meaningfully addressed.

It falls on the fourth estate to fill the void. The time is now.

J.T. is editor-in-chief of JIMBO TIMES: The L.A. Storyteller, a blog dedicated to working class communities and culture in Los Angeles since 2014. Find him on Instagram via @jimbotimes, or on Twitter at @JIMBO_TIMES.