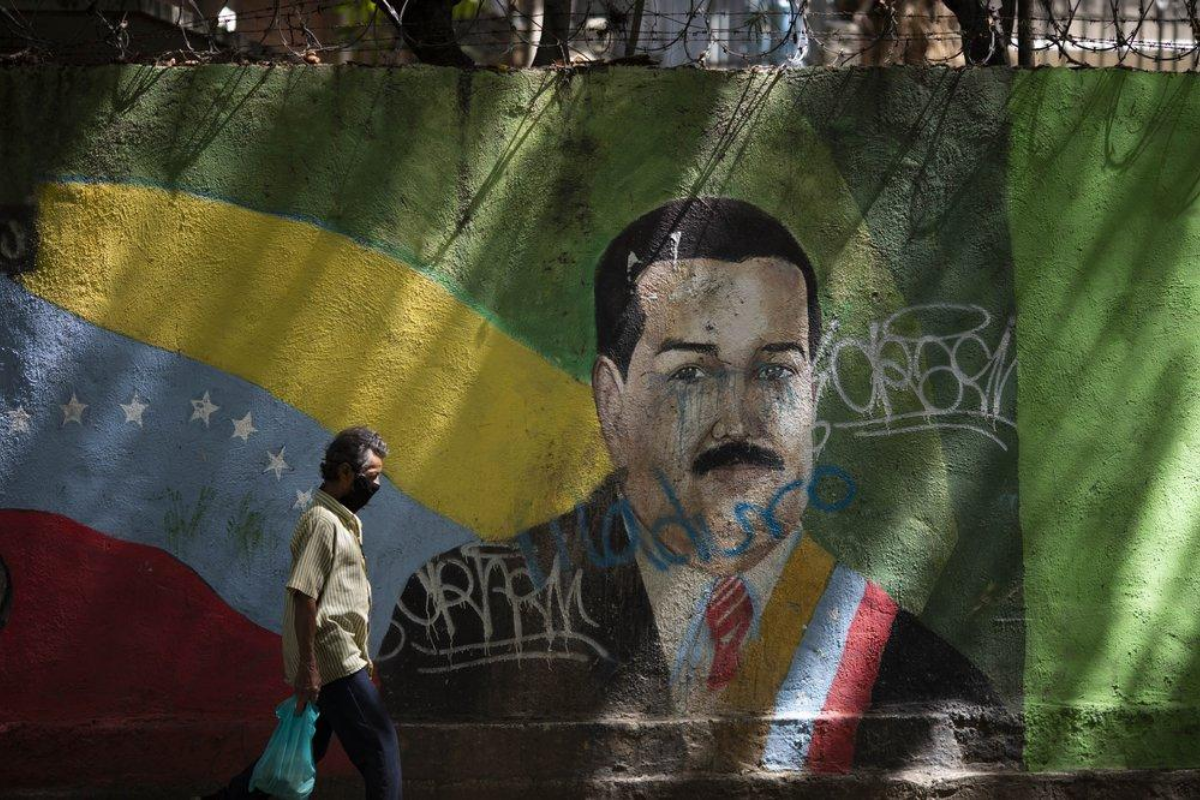 CARACAS, Venezuela (AP) — More than a year after a young U.S.-backed politician rose up to oust Venezuelan President Nicolás Maduro, the socialist leader holds a yet stronger grip on power—with a boost from the novel coronavirus.

The Venezuelan opposition hoped that 2020 could bring new momentum after several failed pushes to overthrow Maduro. Then came the coronavirus. Analysts say the pandemic has helped suck away the opposition’s already flagging support.

Fear of contagion has helped keep protesters off the streets, and the virus-driven end of a slight economic upturn has kept Venezuelans focused on daily survival, not politics.

“In many ways the pandemic has been more of a blessing to Maduro than a curse,” said Geoff Ramsey, a Venezuela expert at the Washington Office on Latin America think tank. “Maduro is stronger now than at any point in the last 18 months.”

Venezuelan officials announced the first COVID-19 cases in mid-March, prompting Maduro to enact a nationwide lockdown that remains in effect. At least 146 have died and roughly 16,000 fallen sick, according to the government’s count—likely a vast underestimate because of limited testing.

On nightly broadcasts, Maduro and his lieutenants update citizens on the numbers, share information on shipments of humanitarian aid from allies like Russia and China and decree new measures to halt the virus.

“Maduro has had an opportunity to show his territorial control,” said Luis Vicente León, a Venezuelan political analyst.

Engineer Francisco Matos, once among thousands cheering Guaidó, said today his hopes of a political change have taken a back seat.

“You have to fight for your family, for food and make sure we don’t get sick,” said Matos, 42, wearing a face mask while shopping for groceries. “Politics seem like a far distant option.”

Guaidó, then a relatively secondary figure in the opposition, announced plans to oust Maduro in early 2019 and quickly gained support from more than 50 nations, led by the United States. But his call for military uprising that April failed, and by the end of the year street demonstrations had noticeably shrunk in size. 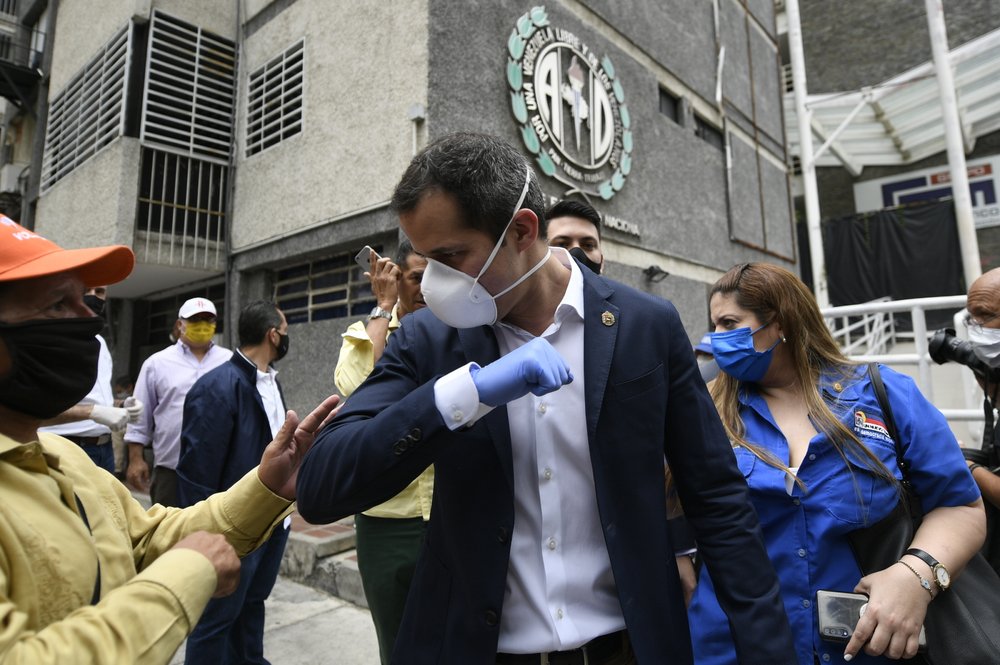 In this June 17, 2020 file photo, Venezuelan opposition leader Juan Guiadó greets a supporter after a visit to the headquarters of Democratic Action political party in Caracas, Venezuela, the day after Venezuela’s Supreme Court ordered its takeover ahead of parliamentary elections expected this year. (AP Photo/Matías Delacroix, File)

Guaidó’s only local outlet now is social media, which many Venezuelans struggle to access because of frequent power outages. As head of the National Assembly, he leads weekly legislative sessions through online conference calls not widely accessible to the public.

“While the dictatorship is every day more isolated, we hold up the banner of unity,” he wrote in a recent Twitter post with a mere 514 shares.

For many Venezuelans, the pandemic has heightened an already intense sense of isolation. International flights that had become increasingly sparse are now entirely cut off. Gas shortages and the lockdown make travel within Venezuela almost impossible.

They include journalists and doctors who have spoken out against the government’s handling of the coronavirus.

Nicmer Evans, who runs news website Punto de Corte, was arrested this month a day after tweeting comments expressing hope that a high-profile Maduro supporter diagnosed with COVID-19 survives the illness—so that he can be judged on earth rather than get “divine” justice.

Evans —a leftist who supported the late Hugo Chávez but whose publication often criticizes Maduro’s government— recorded his arrest, showing police outside his door while making a calm, if rushed statement.

“Our sacred right to freedom of expression, criticism, political action, defense and resistance against tyranny should never be considered an act of hatred,” he said before being taken away on charges of violating an anti-hate law. Authorities haven’t said what triggered the charge.

Foro Penal’s executive director Alfredo Romero said that prisoners often aren’t allowed courtroom hearings or visits with attorneys and relatives. “The pandemic is being used to further deprive them of the right to a defense and due process,” he said.

The Supreme Court —loyal to Maduro— recently appointed a new elections commission, including three members who have been sanctioned by the U.S. and Canada, without participation of the opposition-led congress, as the law requires. The court also took over three leading opposition parties, appointing new leaders the opposition accuses of conspiring to support Maduro.

The legislative election is scheduled for December 6 and thus far the opposition has indicated it will not participate.

Michael Penfold, a Caracas-based fellow at the Wilson Center in Washington, said Maduro’s “goal is to behead the leadership of the democratic opposition by electing this new National Assembly.”

Maduro also seeks a loyal opposition, “hoping to continue to gain time until the international community loses any hope of a change in the country,” Penfold said.

Recent polling by the independent firm Datanalisis shows Maduro’s approval rating at a dismal 13%. Guaidó’s is twice as high, but has tumbled from 60% in February 2019, shortly after he declared himself Venezuela’s rightful president before adoring crowds.

President Donald Trump recently expressed doubt that Guaidó is capable of removing Maduro, saying he “seems to be losing power.” 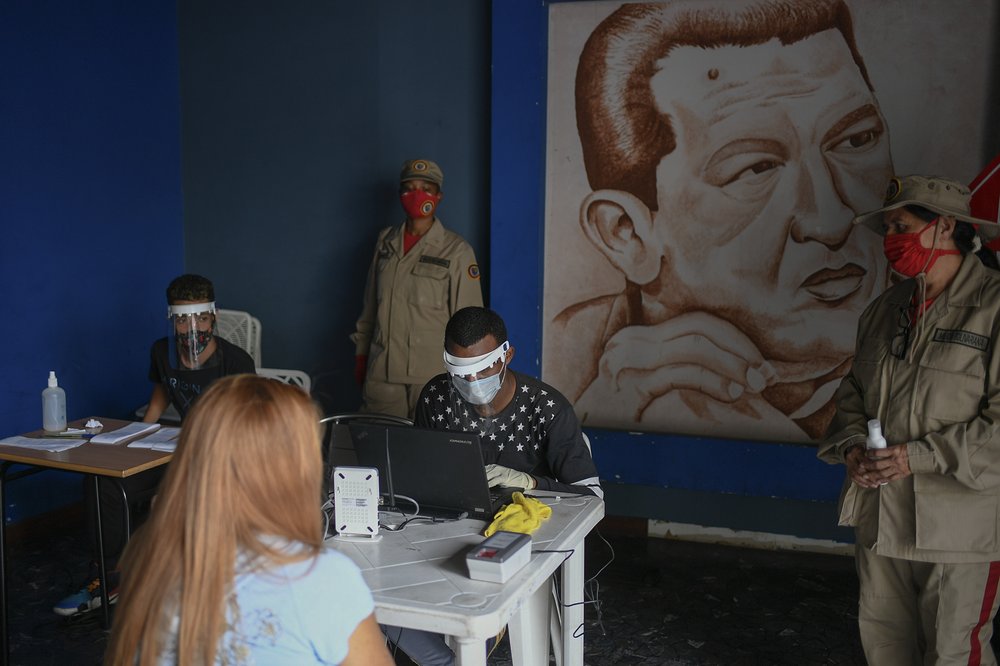 Members of the Venezuelan Electoral Council, sitting, wear face masks and shields amid the spread of the new coronavirus at a validation center, featuring a drawing of late President Hugo Chávez, to certify the authenticity of voter data in Caracas, Venezuela, Saturday, July 25, 2020. (AP Photo/Matías Delacroix)

Elliott Abrams, Trump’s special representative for Venezuela, disputed at a Tuesday briefing that the 18-month-old policy had failed. The White House will continue pressuring Maduro through sanctions and diplomacy, he said, adding that there are no current talks about Maduro’s departure.

“What went wrong is that Nicolás Maduro decided to impose a vicious and brutal regime on the country,” Abrams said.

The developments come amid fresh indicators that Venezuelans are increasingly hungry. Venezuela is now the poorest country in the Americas, according to study by researchers at three Venezuelan universities. Shortly before the pandemic, the United Nations World Food Program released a study finding that one in three people here is going hungry.

A dance instructor, Belinda Villanueva, 60, said her support for Guaidó is unwavering, but these days she is preoccupied with making sure she doesn’t get sick whenever she goes out to shop for food.

Maduro has opposition supporters where he wants them—unable to take to the streets, she said.

“We’re shut in. We’re scared. I don’t go out because this is a real problem,” Villanueva said. “Maduro didn’t invent the pandemic, but he has it as a tool now to exploit as he likes.”

Others, like Ernesto Yamuraque, a self-employed handyman, say Maduro’s firm hand has kept Venezuela from experiencing the extent of the tragedy in neighboring Latin American nations.

“As far as the pandemic goes, Maduro is handling it well,” said Yamuraque, 57, waiting in line at a plaza to register his address with election officials. “I think we are in better shape than other countries.”