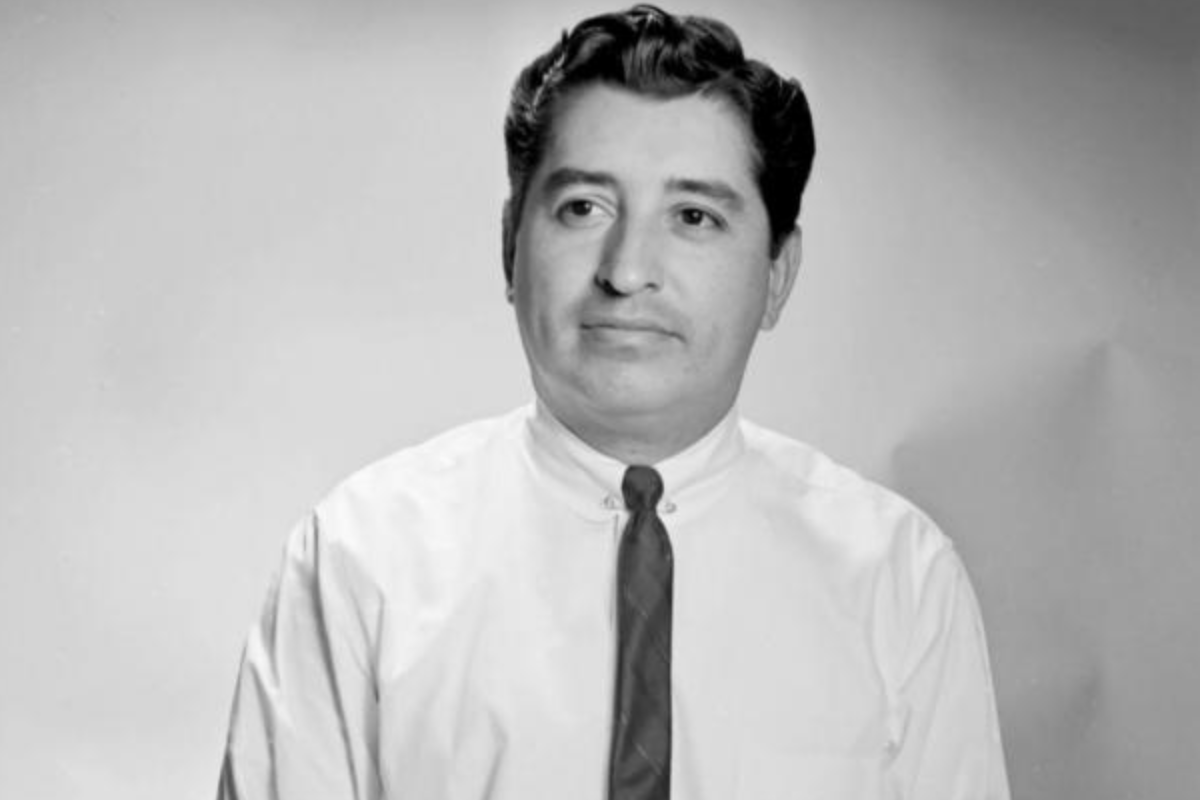 I don’t know how to write about Ruben Salazar.

In the pantheon of 1960s and 1970s revolutionary martyrs, su nombre no suena, not like that of Malcolm X or George Jackson or Fred Hampton. And unless you majored in Chicano or Mexican-American Studies, among Chicanxs you know about Corky Gonzales and his earthquake of a poem “Y soy Joaquin,” or of José Ángel Gutiérrez and the founding of La Raza Unida Party in Crystal City, or of Reies Lopez Tijerina and the storming of the courthouse in Tierra Amarilla, machistas y revolucionarios all.

Ruben? He was shot while having a beer 50 years ago on August 29, 1970—the day of the Chicano Moratorium.

Qué lastima, me gente. A Latinx vato whose life checks every box we can imagine when it comes to un ser humano representative of all that is good and honorable, and yes, revolutionary, about Latinxs, and whose death we still commemorate half a century later, is in our history books and in the public’s eye somehow rendered a footnote when we think about our heroes. Immigrant, scholar, writer, veterano, peleonero—Ruben was all that and more. Self-aware enough to question his conservative upbringing and champion the Chicano struggle (eventually), persistent enough to get in the face of the federal government multiple times over his desire to become a citizen, Salazar was also tough enough to pursue and write stories that put him in the crosshairs of the notoriously and unapologetically racist and murderous Los Angeles cops.

It almost didn’t happen. Installed as the Los Angeles Times Mexico City bureau chief in 1966, Salazar was not happy when ordered to return to the City of Angels in 1968. El Movimiento Estudiantil was gathering steam in Mexico, and as good as a reporter as Salazar was, he surely sensed huge events were ready to happen. (As they did, culminating in the Tlatelolco Massacre.) Salazar likely feared he was called back to California to provide a Mexican-American view of Mexican-American events for the newspaper, and he almost assuredly saw that as professional death. In the hierarchy of newsrooms everywhere, the prestige flows upward—local, national, international. Salazar may have seen being assigned to cover what Times foreign editor Bob Gibson called “the new Mexican-American uproar” as a step back.

Salazar was a pro, however, hasta los huesos. He returned to L.A. and covered his community as any good journalist would, with compassion, integrity, and with what the profession at one time claimed to be the cornerstone of good journalism—objectivity. However, in his Friday columns for the newspaper he was not obliged to hold to that concept, and it in those columns that Salazar found his cantos de revolución as he chronicled the miseries of being Mexican-American and the possibilities for (dare we say, liberation) in the burgeoning Chicano movement.

Salazar pulled no punches. No agency, be it local, state, or national, was immune from his criticism, especially if that agency was complicit in racist policies against his beloved gente. One column lamented the fact that bilingual education was set up for Cubans in Dade County, Florida in 1963, while in 1968 Mexican-American youth in California  —sons and daughters of a people who had been part of the country for hundreds of years— were still being disciplined for speaking Spanish. As he wrote, “despite our talk in the Southwest about ‘our great Spanish heritage’ and the naming of our towns and streets in Spanish, the Spanish language has never been taken seriously by American educators even in areas where both languages could be learned together and correctly.’”

Writing in the non-politically correct vernacular of the day while referring to a problem that exists yet today, Salazar wrote with anger that still smolders about the duplicity between employers and Latinx immigrants who came to the U.S. to work. “A wetback,” he wrote, “lives in constant fear. Fear that he will be discovered. Fear of what might happen to him once la migra finds him. Fear that he will not be paid before being deported. The wetback employers know no such fear. There is no law against hiring wetbacks. There is only a law against being a wetback.”

And writing in April of 1970, he called the label adopted by many Mexican-American youth, the Chicanos, “an act of defiance and a badge of honor,” pointing out that “Mexican-Americans, though large in numbers, are so politically impotent that in Los Angeles, where the country’s largest single concentration of Spanish-speaking live, they have no one of their own on the City Council.” In that same column, perhaps his most famous, he wrote the one line that still sings to me. “A Chicano,” he wrote, “is a Mexican-American with a non-Anglo image of himself.”

“We were here first. And we’re just not going to melt.” pic.twitter.com/ovE2hLsWZi

Ruben’s image of himself is unexplored, as he left few biographical notes. Phillip Rodriguez, the filmmaker who helmed a PBS documentary about Salazar, said, “The Salazar story was one of the major stories of the 20th century, and basically it’s been neglected by the nation. And part of the reason is that we haven’t known that much about him.”

We do know that on June 1 of this year, a 16-year-old Latinx youth was hit in the forehead by a “less-than-lethal” round fired by Austin police at a protest march after the police murder of George Floyd. The more things change, the more they remain the same.

I would bet that Salazar would have one hell of a lot to say about that. Rest in power, carnal.

Jorge Antonio Renaud is Latino Justice’s Regional Director of Policy and Advocacy for the Southwest. Born in New Mexico but raised in Texas, he is the son of a farmer of Louisiana descent, whose family moved to South Texas over 150 years ago, and a mother who waded the Rio Bravo at 15. Jorge is an Army veteran, has a MSSW from the University of Texas at Austin, and is the proud father of Catarina Amelia Renaud. As a Policy Analyst at the Texas Criminal Justice Coalition, Jorge authored dozens of bills in 2013 and 2015 that addressed Texas prison conditions and parole supervision.

As a Senior Policy Analyst at the Prison Policy Initiative, he authored numerous studies examining ways to alleviate this country’s obsession with incarceration and disproportionate sentences. Jorge has published poetry and essays across the country. He was also previously incarcerated for over 27 years. Jorge has been an integral part of Reenvision Justicia’s network of Latinx organizers, lawyers and policy analysts for years and a regular and popular speaker at LatinoJustice’s annual convening of Latinxs and the Criminal Justice system. Twitter: @RenaudAntonio.