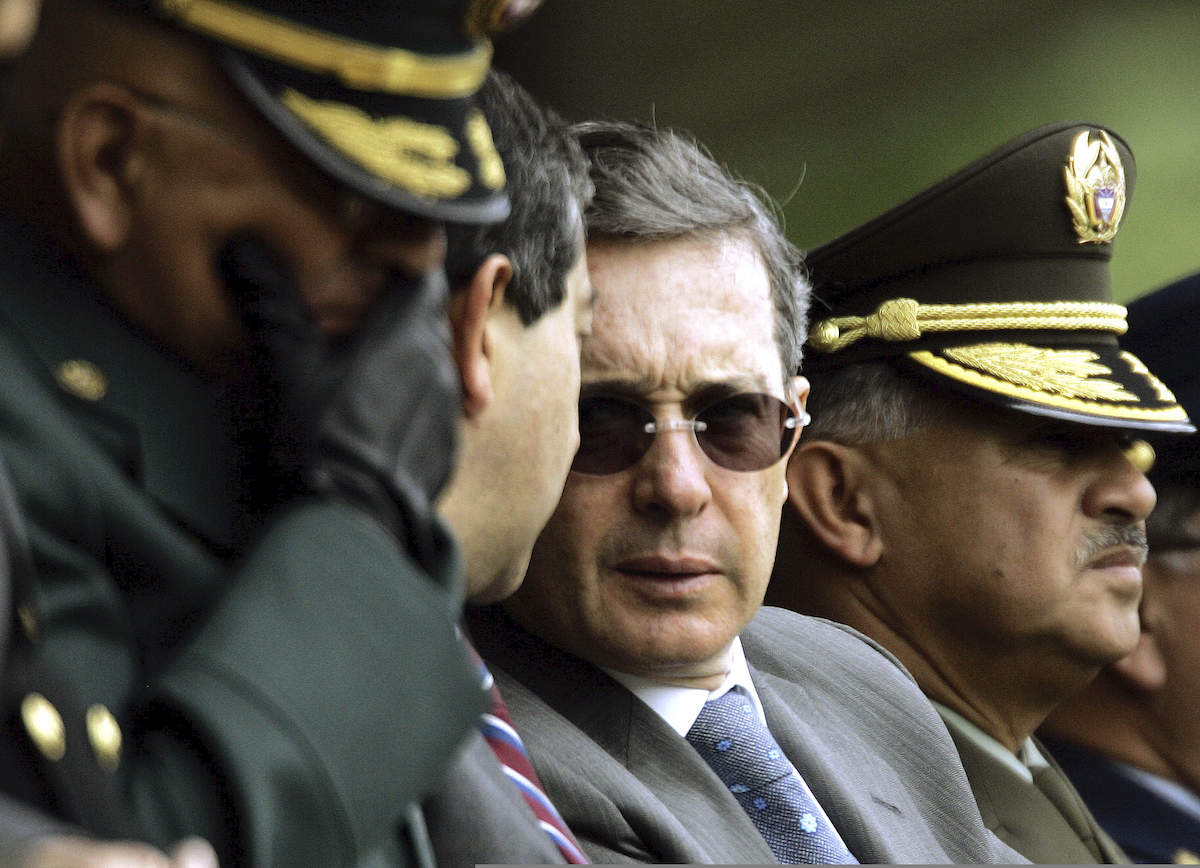 In this June 9, 2006 file photo, Colombia’s President Álvaro Uribe, center, speaks with Defense Minister Camilo Ospina, second left, during a police ceremony in Bogotá, Colombia. The U.S. Department of Defense suspected back then that the now former president harbored ties with violent paramilitaries but likened it to a necessary evil in the fight against leftist rebels, according to a newly declassified memo from his early years in office. (AP Photo/Fernando Vergara, File)

BOGOTÁ, Colombia (AP) — A high-level U.S. Department of Defense official strongly suspected that Colombia’s then-President Álvaro Uribe, now under house arrest, had a history of dealings with violent paramilitaries, according to a newly declassified memo from his early years in office.

The document is among a batch of records shared with The Associated Press by the nonprofit National Security Archive, which contends it is the first to show that concerns about Uribe’s potentially unsavory ties with armed groups hired by wealthy landowners to protect them from guerrillas reached the highest levels of the Pentagon.

“Uribe almost certainly had dealings with the paramilitaries (AUC) while governor of Antioquia,” Peter Rodman, then a top Pentagon deputy, wrote Bush-era Defense Secretary Donald Rumsfeld in a confidential 2004 dispatch. “It goes with the job.”

The missive adds to suspicions —which Uribe has vehemently denied— that the man credited with turning the tide in Colombia’s long war with Marxist combatants himself engaged with violent actors while leading the province that includes Medellin in the 1990s. The United Self-Defense Forces of Colombia, known by their Spanish acronym AUC, were declared a foreign terrorist organization by the U.S. in 2001.

The Supreme Court is investigating allegations Uribe pressured ex-paramilitaries into retracting statements linking him to their militias in a case that has divided the nation and brought tensions over Colombia’s peace process to the surface.

The documents don’t include any specific description of direct interactions between the former president and paramilitaries, and there is little to show whether or how deeply the U.S. tried to determine if any ties did in fact exist. But dozens of lawmakers —including numerous Uribe allies— have been jailed and convicted for ties with paramilitaries, establishing a clear connection between politicians and the illegal armed groups.

A spokesman for Uribe said in a statement that, “The only dealings President Uribe had with paramilitaries was to throw them in jail,” and highlighted several instances in which senior U.S. officials praised his leadership and human rights record.

“Every action taken at the highest levels of the U.S. government proved that there was never any doubt about President Uribe’s integrity and commitment to human rights and the rule of law,” adds the statement from lobbying firm DCI Group. Justice Department filings show the agency has been hired to provide support for the former president at $40,000 a month.

The behind-the-scenes look at the U.S. government response to Uribe’s first years in his 2002-2010 presidency show officials overwhelmingly pleased with his aggressive approach to conquering guerrilla groups engaged in murder, kidnapping and large-scale drug trafficking. These were the early years after 9/11, and the George W. Bush administration saw defeating Colombian rebels as in tune with a larger mission of combating terrorism around the world. 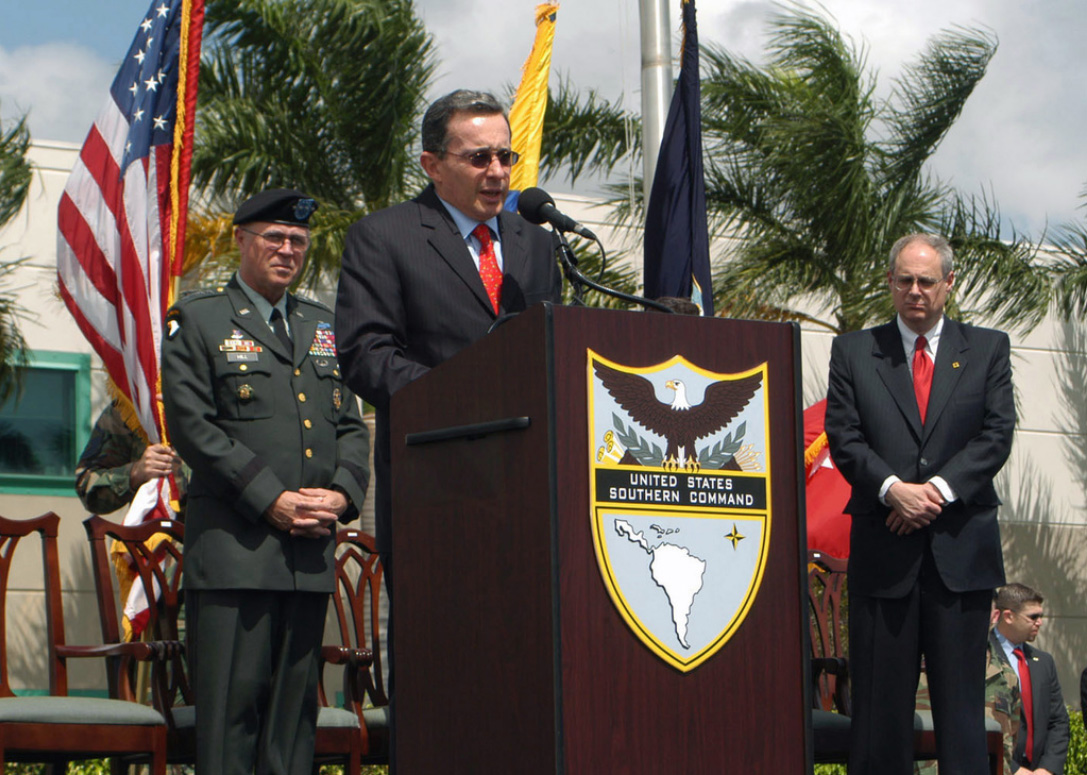 In one memo, a high-ranking Pentagon official touted that Uribe’s military had killed 543 rebels with the Revolutionary Armed Forces of Colombia and captured 1,063 more in the first half of 2003—a dramatic increase compared to his predecessor. In another, an official highlighted favorable coverage of Uribe’s battlefield triumphs in the media.

Rumsfeld himself seemed keen on seizing the moment to “deal a crippling blow to narcoterrorists,” he wrote in a memo offering talking points to a deputy.

“President Uribe only has a few years left to complete this task,” he added.

But also woven in the dispatches are recurrent, not so subtle hints that the Colombian military, key Uribe allies —and possibly the president himself— had entered into alliances with the United Self-Defense Forces of Colombia, the umbrella paramilitary group.

One 1997 Defense Intelligence Agency report noted that military cooperation with paramilitaries had “gotten much worse” under Gen. Rito Alejo del Río, who served as commander of the Army’s 17th Brigade toward the end of Uribe’s time as governor. The same report notes that two other officers “never allowed themselves to become directly involved in encouraging or supporting paramilitary activities, but they turned their backs to what was happening.”

Del Río was later sentenced to 25 years in prison for his role in the killing of a peasant leader.

One of the most revealing records outlining the AUC’s brutality comes from a 1997 embassy cable detailing a 90-minute conversation with Jorge Alveiro Valencia, a dentist, rancher and alternate conservative lawmaker. He said that of 100 people killed in his district in recent years, 10 were guerrillas, another 10 active rebel supporters and the rest “unlucky victims.”

He recounted one “punishment killing” in which paramilitaries killed an elderly peasant and held a “funeral” for his head on one day and for his body the next.

“That’s the one bad thing about paramilitaries,” he states, according to the cable. “They are very cruel and often go after people who don’t deserve it.”

Asked about Uribe, Valencia said he “hates the guerrillas” because they murdered his father —a charge the rebels have denied— and had ties to local cattle ranchers and landowners who in turn pay the paramilitaries to “go after” the combatants.

But he also described Uribe as “clean and honest” and not involved with them.

Valencia added that the paramilitaries “respect him for his anti-guerrilla stance.”

That admiration appeared evident when Valencia described being kidnapped by paramilitaries in 1996. The men tied his hands behind his back, held rifles to his head and threatened to kill him if he didn’t admit to being a guerrilla collaborator. He denied any involvement and offered them money. His captors laughed and said they already had plenty of money and weapons.

According to the cable, Valencia told embassy staff that what saved him in the end were some documents in his briefcase showing that he knew Uribe.

Like the material included in the 1,554-page court decision on Uribe’s house arrest, there’s no hard evidence tying Uribe to the paramilitaries but rather a web of connections one step removed. References to Uribe as “El Viejo” also surface in those documents.

The two-time president remains one of Colombia’s most important political leaders. He is widely credited —and revered by many— for weakening guerrillas to the point they opted to negotiate peace. But his popularity has declined in recent years, and a broader reckoning in Colombian society over the conflict has resulted in a closer examination of his own potential role in human rights abuses.

The Supreme Court has called Uribe for questioning in a probe into three massacres and the killing of a human rights activist while also advancing the witness tampering investigation.

Michael Evans, a senior analyst with the National Security Archive, said there is no indication Uribe’s suspected ties had any impact on U.S. assistance to Colombia, which grew significantly during his presidency.

“Uribe’s presumed links to a U.S.-designated terrorist organization were far less important than his performance as president,” Evans said.

The Trump Administration has signaled its unwavering support of Uribe, with Vice President Mike Pence recently hailing Uribe as a “Hero” in a Twitter post calling on Colombian officials to let him defend himself outside the confines of house arrest.

But, as Former President @AlvaroUribeVel is under house arrest, we join all freedom loving voices around the world in calling on Colombian officials to let this Hero, who is a recipient of the US Presidential Medal of Freedom, defend himself as a free man.

In the conversation with Valencia, the landowner, Uribe frequently surfaced, though embassy staff didn’t appear to pry for details on possible ties to paramilitaries. Valencia, who stated his admiration for Uribe, hinted at indirect links while also denying Uribe’s involvement.

He described the paramilitaries as an inevitable, if terrible, consequence of a conflict in which Colombia’s armed forces were either unwilling or unable to defeat rebels on their own.

Landowners tired of threats, he said, saw hiring paramilitaries as their only alternative.

“Everyone pays,” he said.