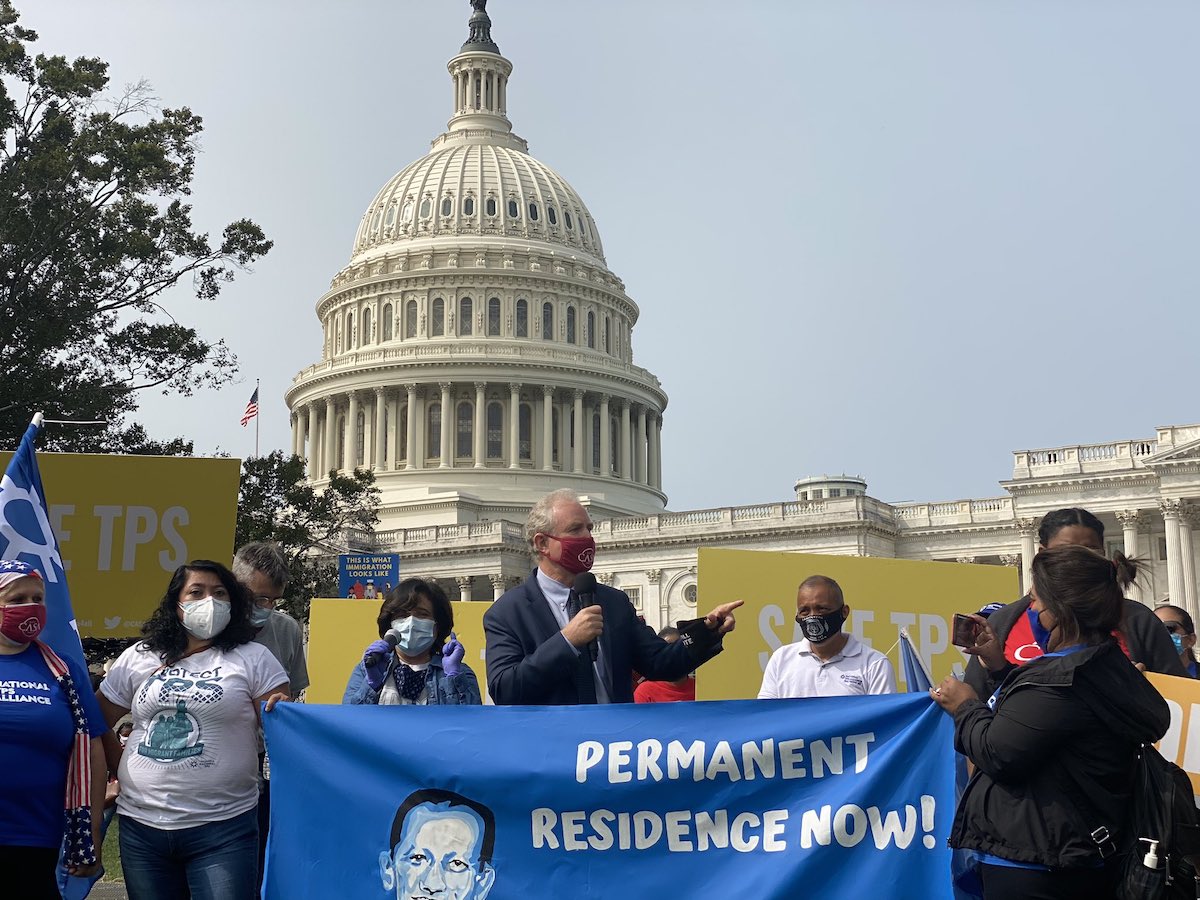 In response to the Monday ruling by the 9th U.S. Circuit Court of Appeals allowing the Trump administration to end the Temporary Protection Status (TPS) program to four countries, immigrant rights groups denounced the decision during a Tuesday demonstration and press conference in Washington, D.C.

Chanting “Trump escucha, estamos en la lucha. (Trump listen, we are fighting)” with banners in hand, TPS holders and their families marched from Union Station to Capitol Hill, demanding that Congress pass a law that would provide them a road to permanent residency.

The press conference was hosted by CASA and the National TPS Alliance.

“As we know, the 9th Circuit Appeal Court gifted Trump the right to tear our families apart,” said Elsy López Ayala, a TPS holder from El Salvador since 2001 and one of the plaintiffs who sued the federal government. “But yesterday’s decision makes the fight for a permanent residency even stronger and make us keep putting pressure to congress to act fast. It is time that we have permanent residency.”

According to the ruling, the Trump Administration can terminate TPS for 300,000 immigrants from the countries of Sudan, Nicaragua, Haiti, and El Salvador, resulting in loss of federal protection and eventual deportation. Many of these TPS holders have been living in the United States for years and are part of mixed-status families. The court ruled that TPS holders from these countries will be permitted to maintain their status until at least March 5, 2021, and those from El Salvador until at least November 5, 2021.

Maryland Senator Chris Van Hollen, who in 2019 introduced a bill that would provide TPS holders a road to permanent residency, also spoke at the press conference

“At this moment of the pandemic, many of you are on the frontlines protecting others in our community and putting yourselves in danger,” Van Hollen said. “Yesterday, we called on the Senate to immediately pass the employment authorization document (EAD) in the next coronavirus relief package that would immediately protect TPS workers in the U.S. because your lives are not temporary.”

The TPS program was first introduced in 1990. It is a temporary immigration status to citizens of specific designated countries that are confronting an ongoing armed conflict, environmental disaster, or extraordinary and temporary conditions. It also provides a work permit for those citizens and halts removal procedures.

“Although I am devastated by this ruling, it is imperative now more than ever, that we continue this fight. The racist motivations of Trump’s appeal will not win the end,” Elsy Alfaro, TPS holder and CASA member, said in a press release. “Now Congress must act to protect people like me and my family. It feels like every day is lived with uncertainty when your legal status in the country is up for debate.”

Alfaro has been living in the U.S. since 2000, and she is originally from El Salvador. She has been working cleaning offices and home, and worked in construction before losing her job due to the pandemic.

For her, going back to El Salvador would hinder her children’s professional development and peace of mind.

“My whole life is here. My church and my five children who were born and raised here. I want to stay here with them so I can watch them grow and follow their dreams,” Alfaro said. “My TPS status could only protect me temporarily. Hundreds of thousands of people like me need a complete overhaul of the TPS system and a clear path to lawful permanent residence. This ruling makes it clear that we need Congress to create a path to permanent residency now.”

President Donald Trump first announced he would end TPS back in 2018, claiming the four countries have recovered from the natural disasters and violent conflict that forced people to travel to the U.S. He has also sharply criticized the program, reportedly referring TPS holders as “people from shithole countries” in a now infamous and widely criticized incident.

“The president’s vile statements about TPS holders made perfectly clear that his administration acted out of racial animus,” Ahilan Arulanantham, senior counsel of the American Civil Liberties Union Foundation of Southern California, said in a Monday statement. “The Constitution does not permit policy to be driven by racism. We will seek further review of the court’s decision.”