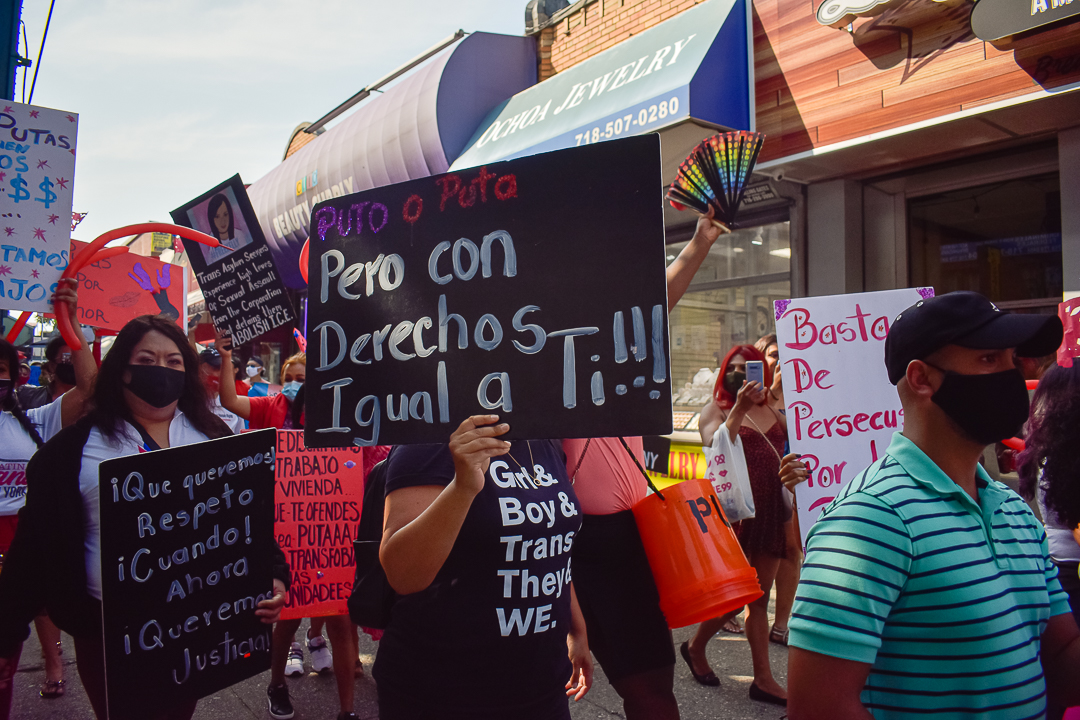 SlutWalk is a worldwide protest aimed at reclaiming the word “slut,” calling for an end to rape culture, including victim-blaming and slut-shaming, and fighting for women’s right over their bodies.

La Marcha, as some trans women call it, is also a call to decriminalize sex work and to ban an anti-loitering law, colloquially known as walking while trans, which gives power to the police to arrest a transgender woman because of the assumption that they are engaging in sex work. 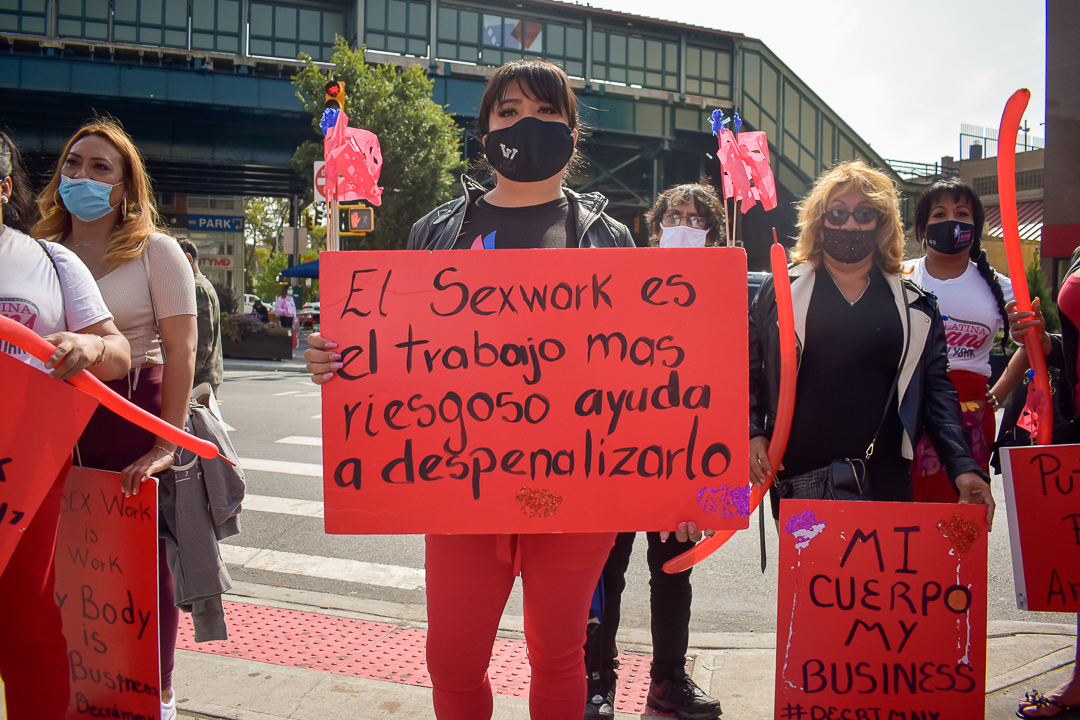 “We are fighting for our rights because recently we are not free to walk around because the way we are dressed, and even if we are walking with a family member, the police can stop us thinking we are engaging in sex work,” said Kendra, a trans woman originally from Mexico who came to support her fellow sisters. 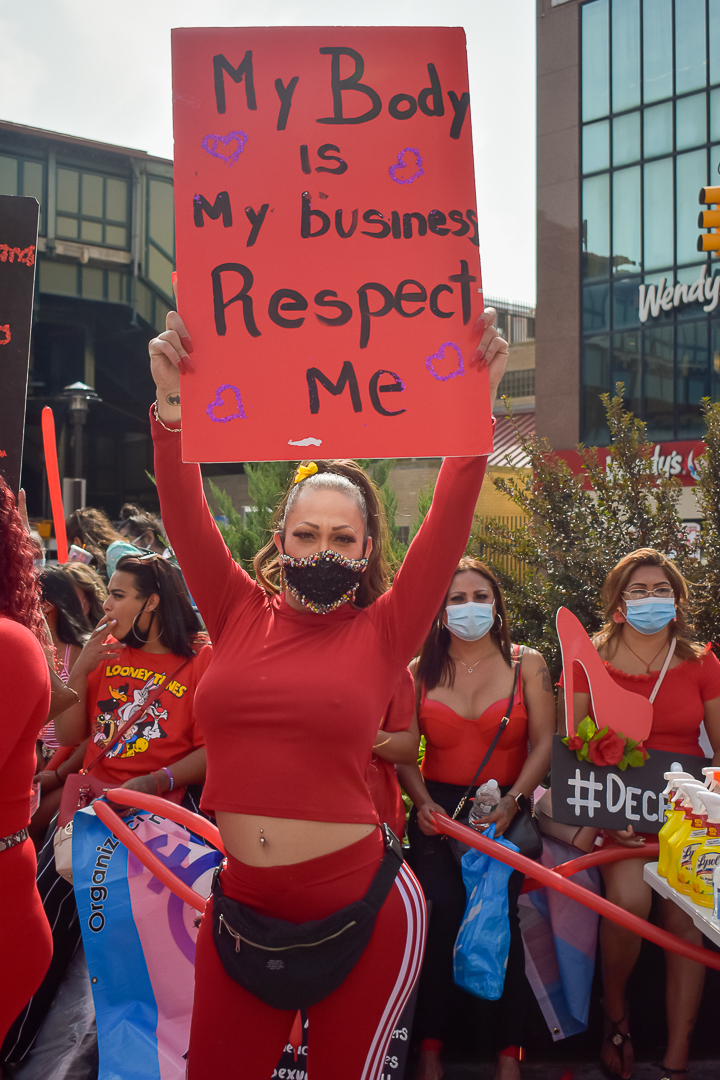 “We want to change that [anti-loitering] law to being able to walk freely,” Kendra said. 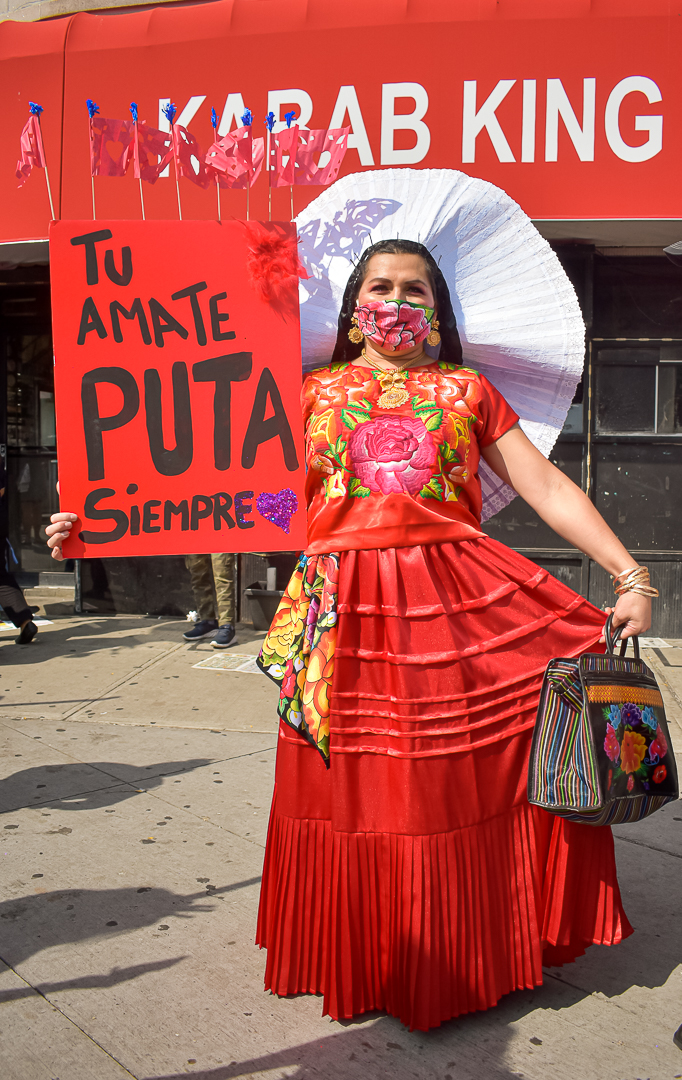 “Transgender people —and particularly Black and Latina transgender women— are marginalized, stigmatized and criminalized in our country. They face violence every day, and they fear turning to the police for help,” said Rodrigo Heng-Lehtinen, deputy executive director for the National Center for Transgender Equality. 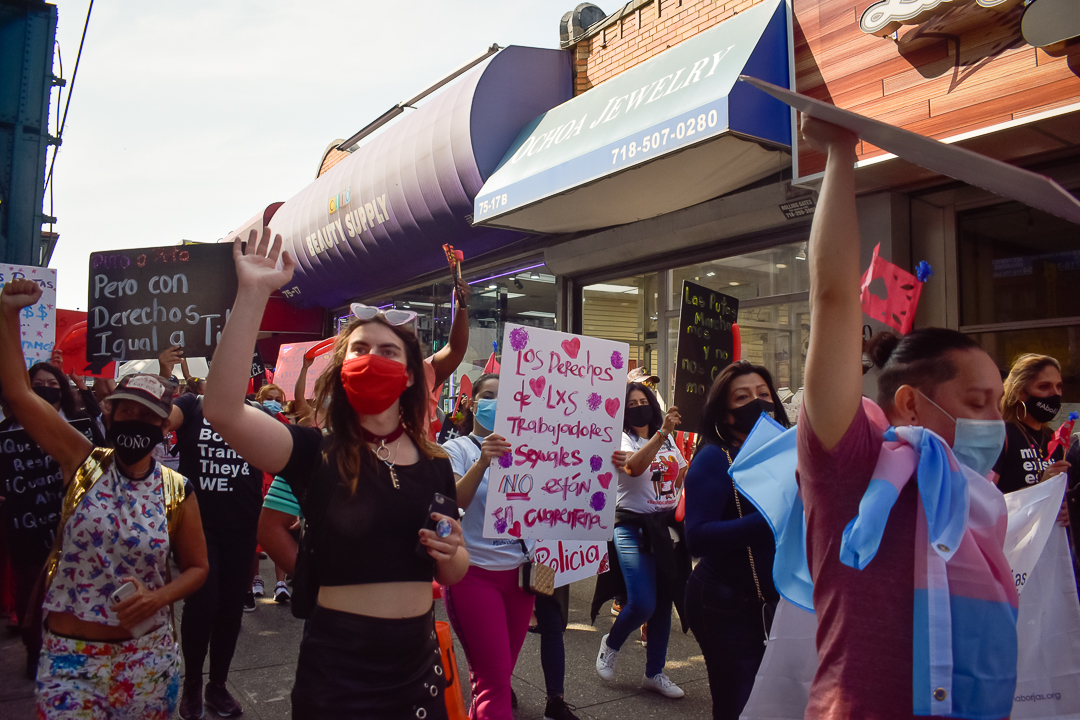 Around a hundred trans women from different Central American countries, and in different stages of womanhood, gathered at the plaza.

Some of them are undocumented or perhaps crossed the border escaping from violence. Some are current sex workers; others did at some point in their lives. All of them spoke Spanish, and all of them were used to the curious stares of passersby. 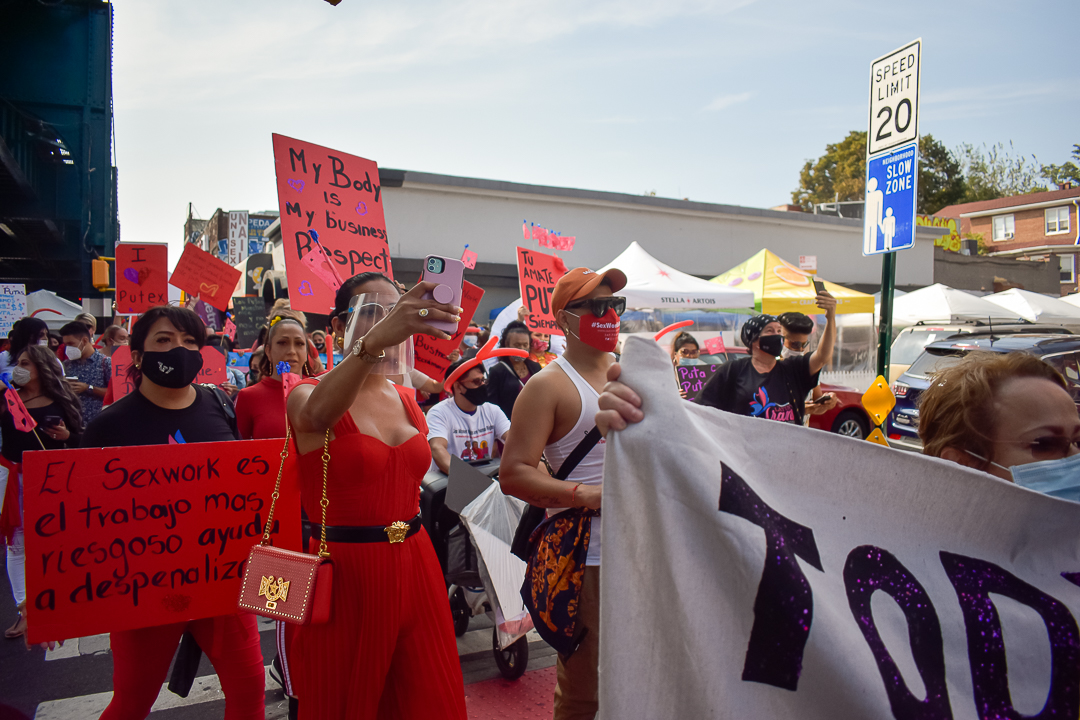 “Un grito, las putas, que se sienta en Queens,” said Liaam Winslet, the acting director of CITGNY and trans activist. “Today, putas will take over the streets once again, and we will demand justice. Because our rights are not quarantine”

Dressed in jeans with a white T-shirt with this year’s official logo, Liaam thanked everyone for coming and encouraged everyone to be louder than ever. 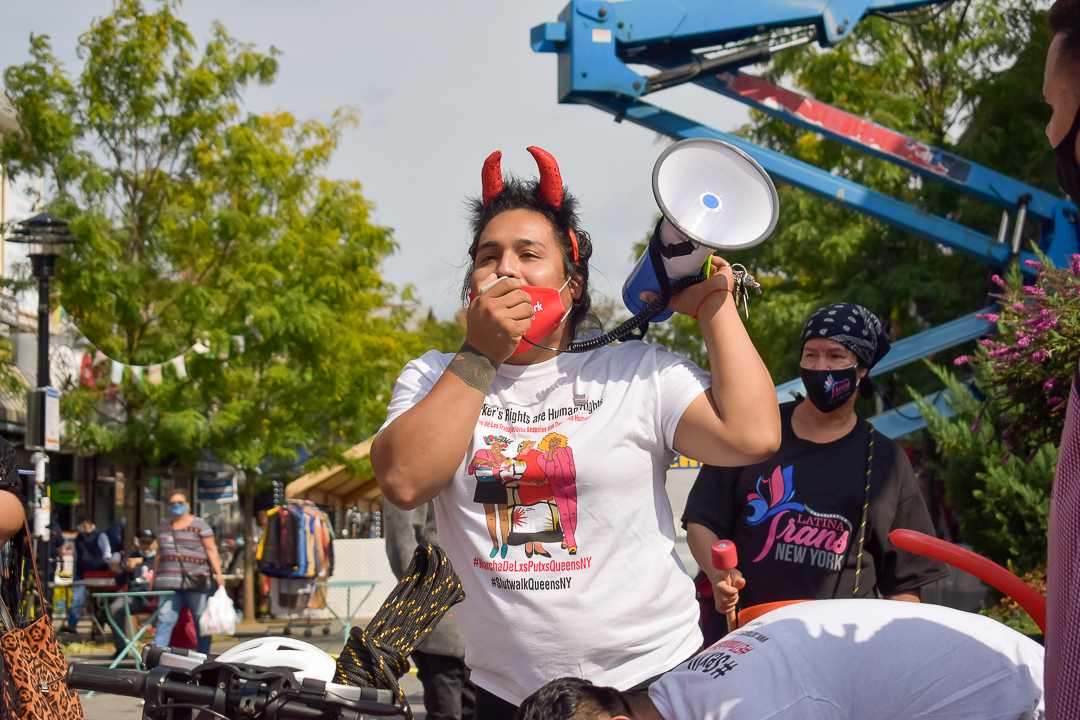 I first met Liaam a week before the first marcha back in 2018. During that time, I sat with her to talk about her experience growing up trans back in her home country.

She was born and raised in Guayaquil, Ecuador. From an early age, Liaam remembered preferring more “girly” activities. She jumped rope with other girls, played dolls, and role-played scenes from her favorite telenovela, Marimar.

“I liked to pretend I was Marimar [the main protagonist],” Liaam said back then. “I used to hide while playing because a little boy shouldn’t be doing that. He should be playing fútbol or playing with cars, not pretending he is a woman.” 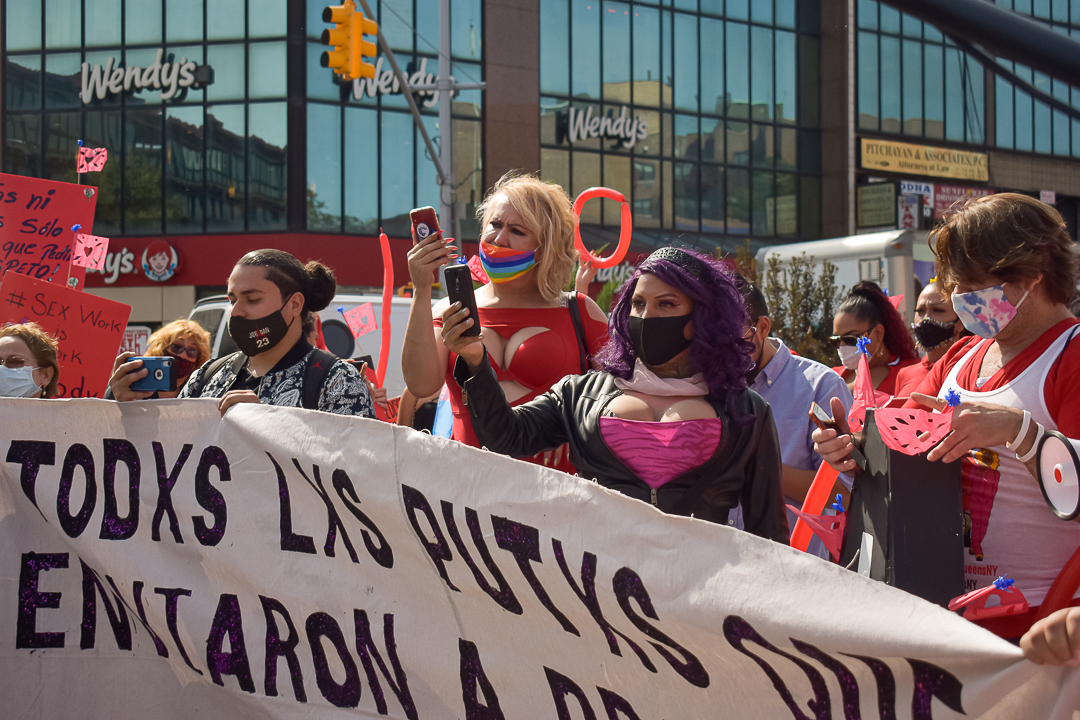 The innocent play came to an end when her mother found out.

“She beat the crap out of me,” Liaam added, laughing. “No me estaba riéndo cuando pasó. I wasn’t laughing when it happened.”

She was about six years old.

Since then, Liaam suffered a variety of physical abuse, mostly from her family and teachers at school.

“Everyone used to yell at me: ‘Actúa como hombre, no como hembra, act like a man, not like a woman,’” Liam said. “And I would just cry. I was a little girl. I didn’t know what they meant.”

She was sent to conversion therapy soon after.

“It was terrible,” Liaam continued as she stroked her ponytail nervously listing all the abuses she experienced during that time. “I experience a lot of violence during those years. Cosas terribles.”

After suffering these series of abuses, Liaam knew she couldn’t be silent anymore. She found support in an organization created exclusively for transgender youth in Guayaquil, and spent nights walking the streets handing condoms and conducting HIV tests.

Her new life as an activist came with a price.

At the age of 23, a pimp from a girl she was helping harassed her and threatened to kill her. Liaam was forced to leave the country. In May 2012, she came to the United States seeking political asylum. 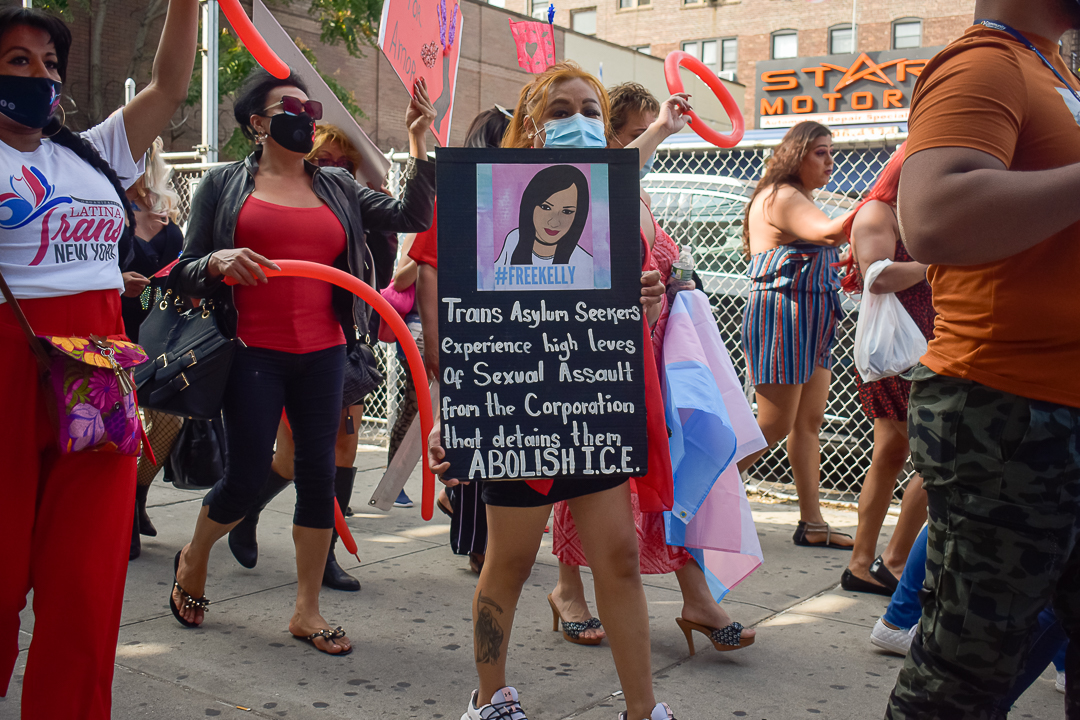 For trans immigrants, the process is long and uncertain.

To qualify, Liaam had to prove fear of persecution and file the petition within a year. For two years, Liaam was collecting documents for her asylum case. At that time, her only source of employment was selling her body.

“I am not afraid of saying I was a sex worker,” Liaam said firmly. “Society forces you to that path because there are no services for us out there. We have to find a way to survive.”

After a year working in the streets, Liaam began working with Lorena Borjas, a trans activist from Mexico. Liaam soon became a peer educator, similar to her work in Ecuador. In 2014, she was granted asylum.

“One thing I have learned is if we do not organize ourselves, nobody is going to do it for us,” Liaam added. “We are going to make our community visible.”

With this goal in mind, Liaam helped organized the first marcha. 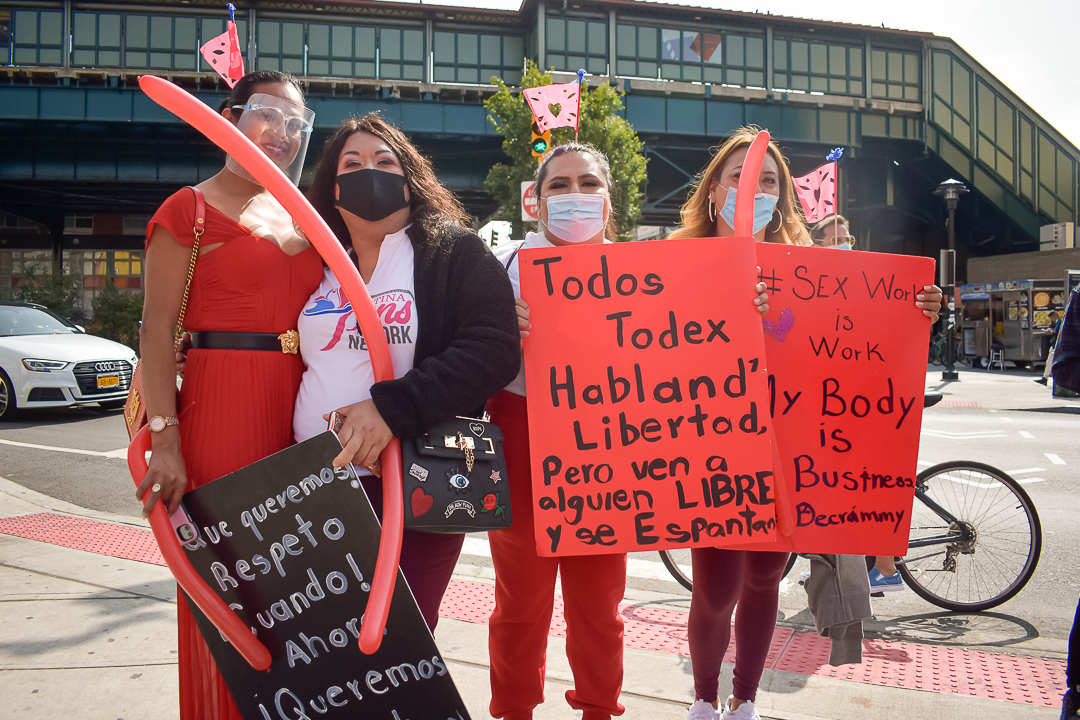 “I am here to legalize sex work and to be respected. We want to be treated with respect and for society to don’t look down upon us for the work that we do,” said Fergie Naomi, an immigrant from Mexico who has been doing sex work for more than 10 years. “We deserve the right to live and be respected.”

Alondra Beltrán also came to La Marcha to support the decriminalization of sex work, which has been her main source of employment for more than 15 years. 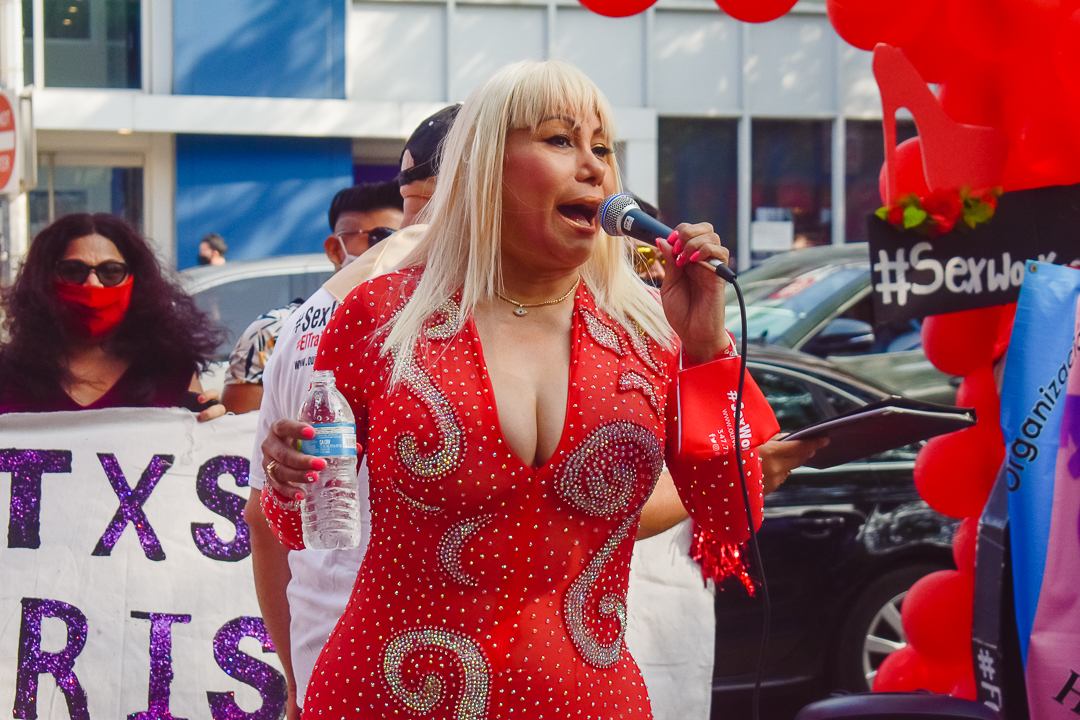 Dressed in a red catsuit adorned with gemstones and a stylish hairdo, Laura Martínez, an iconic drag queen and trans activist, led La Marcha. The official color of La Marcha is red. The organization decided to wear red because the color is often used as a representation for sexuality and sexual desire. It is also heavily related to Latina identity. 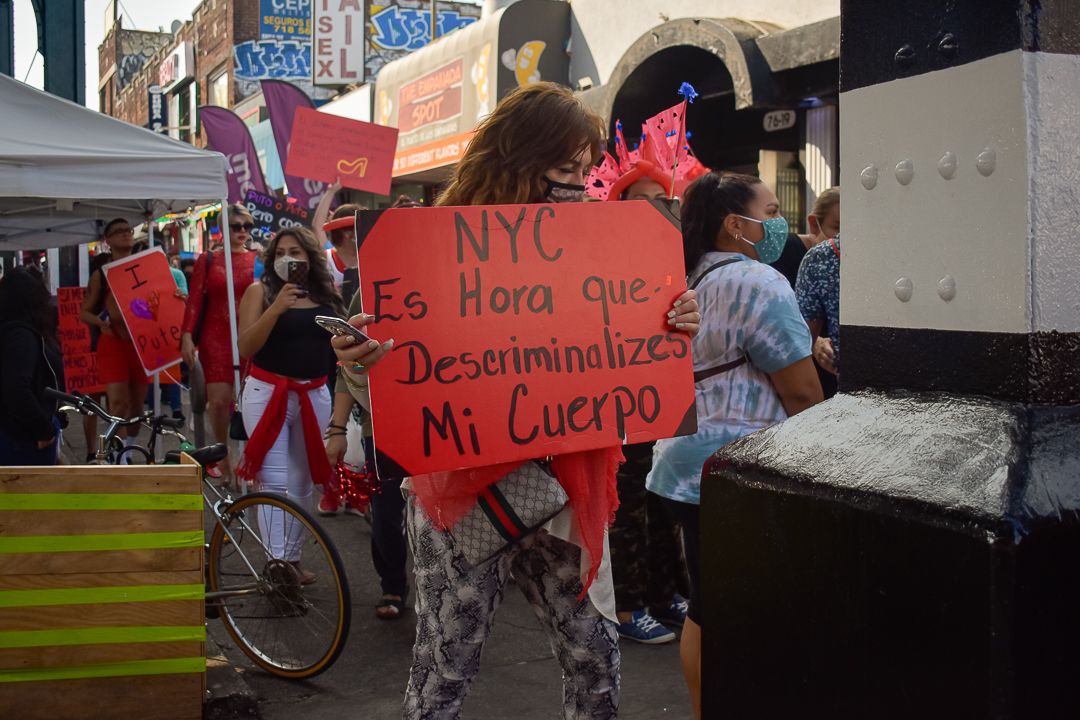 A protester holds a sign that reads: NYC is time to decriminalize my body (Diego Jesús Bartesaghi Mena/Latino Rebels)

Protesters carried handmade signs with messages written in Spanish that said “Free Them All,” “Stop Police Abuse,” and “Sex Work is Work.” Chants such as “my body, my business” and “putas unidas jamás serán vencidas” (sluts united, will never be defeated) were heard loudly throughout the streets.

Despite the constant roaring of the Number 7 train and the honking of cars, the women were noticed. 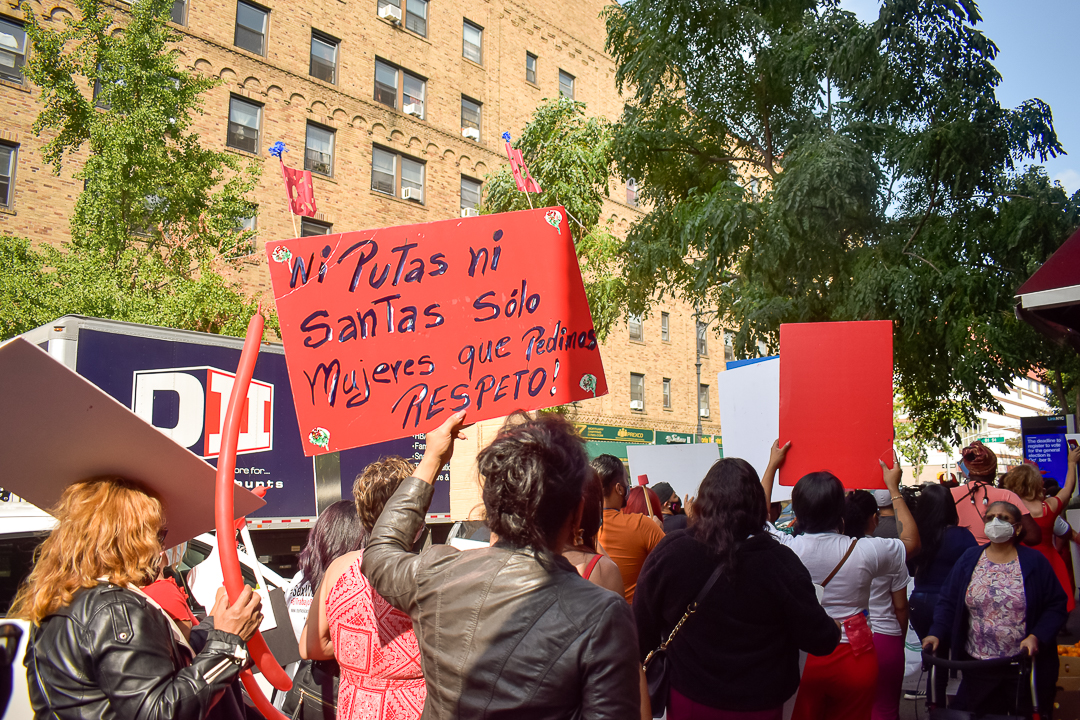 A protester with a sign that read, “Neither slut nor saints, only women that are asking for respect.” (Diego Jesús Bartesaghi Mena/Latino Rebels)

Some came out of their house to witness the commotion. Others watched cautiously from their windows, while many took pictures and videos.

Most shook their head in disapproval or laughed at them. Some of them even yelled homophobic and transphobic slurs. But the women did not mind. 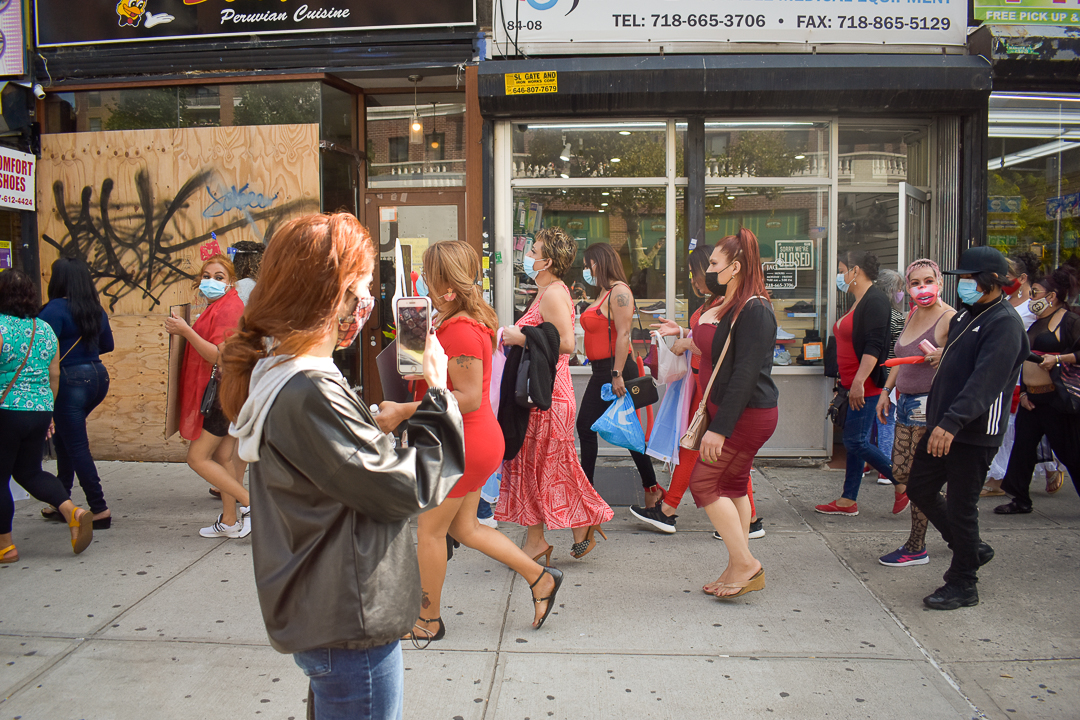 La Marcha ended at the Manuel De Dios Unanue Triangle park, site of the first march. Once the event ended, everyone went back home. Some also got ready to take over the streets at night once again hoping they’ll get work and that the police won’t stop them.