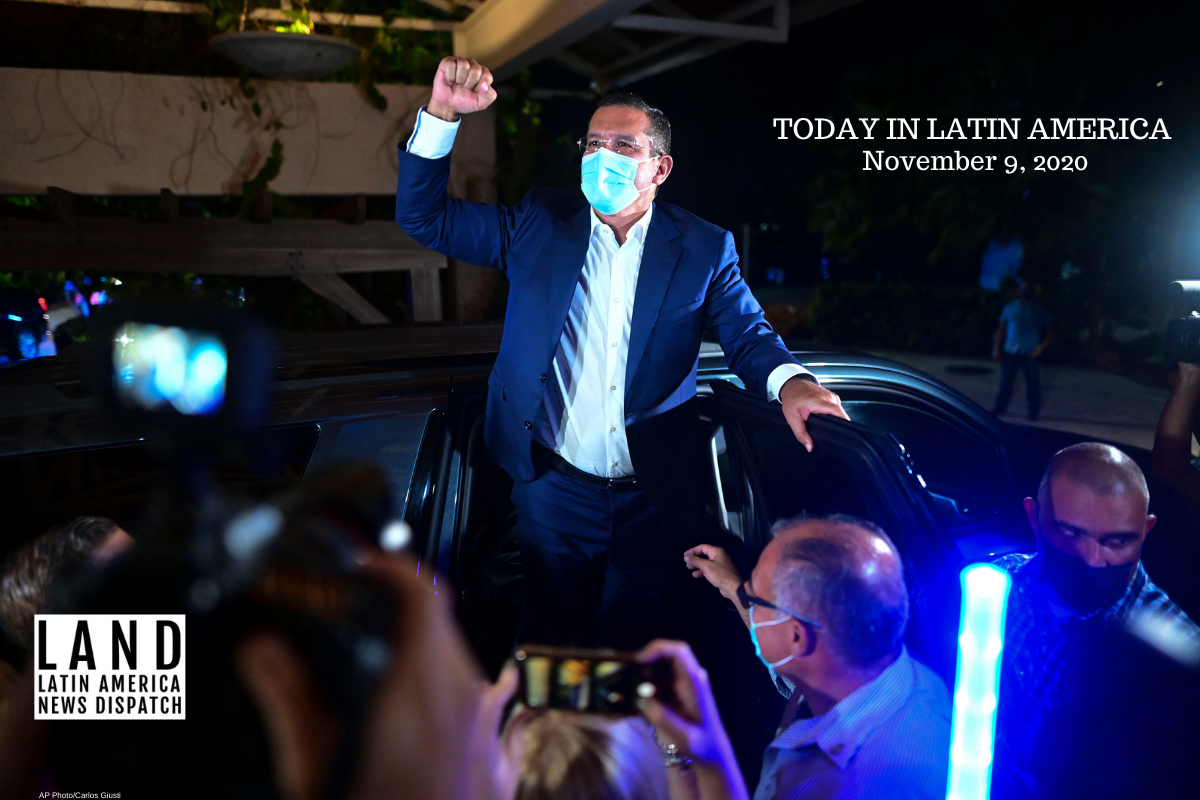 PUERTO RICO: Pedro Pierluisi of Puerto Rico’s pro-statehood New Progressive Party has been declared the winner of the island’s gubernatorial race. Official preliminary results were released late on Saturday, hours after U.S. President-elect Joe Biden’s win was announced. Pierluisi received nearly 33% of the votes, while his opponent Carlos Delgado Altieri of the Popular Democratic Party received 32%. It is the first time that both of Puerto Rico’s major parties received less than 40% of the vote. In the summer of 2019, Pierluisi became Puerto Rico’s governor —for five days— after the resignation of the then-governor, until the island’s Supreme Court declared his governorship unconstitutional and ordered him to step down.

Turnout for this year’s election hovered at 51%. Also on the ballot was a non-binding referendum on statehood: over 52% of Puerto Ricans voted that Puerto Rico should be “admitted immediately into the union as a state.” This is the sixth time the island has voted on a statehood referendum, but any changes to Puerto Rico’s status would need to be approved by the U.S. Congress, which is under no legal obligation to abide by the referendum’s outcome. Puerto Ricans backed statehood previously in a non-binding referendum in 2017, though turnout was just 23%. Puerto Rico has been a U.S. territory for over 120 years, making it the world’s oldest colony.

ARGENTINA: The opposition held protests on Sunday in the cities of Buenos Aires, Santa Fe and Córdoba against the government of President Alberto Fernández. The protests were convened by the opposition in rejection of a Supreme Court decision that removed three judges from investigating Vice President Cristina Fernández, who also ruled Argentina from 2007 to 2015. Land owners and producers also gathered to protest the increased squatting of land. The protests are the ninth since the government implemented a quarantine to curb the COVID-19 pandemic.

BOLIVIA: President Luis Arce took office on Sunday in a ceremony that saw the Movement Toward Socialism (MAS) party return to power. Arce was the economic minister of former President Evo Morales, who was forced out of power in 2019 after 14 years. Arce was accompanied by MAS party leadership to the presidential residence at Palace Quemado in a ceremony that included a military and civilian parade. In his speech, Arce criticized the transitional government of Jeanine Áñez for trying to block the MAS party and for record unemployment and poverty.

COLOMBIA: President Iván Duque met with Revolutionary Armed Forces of Colombia (FARC) leaders on Friday to discuss the reintegration process and the murder of 236 demobilized FARC combatants since the signing of the peace accord in 2016. Hundreds of ex-combatants had marched to Bogotá in protest a week earlier against their systematic murder in hopes of being able to talk to the president. Pastor Alape, a former guerrilla commander, called the meeting important and “encouraging.” The president said the government would speed up the implementation of the peace accords and put a focus on security, access to land and productive projects.

HAITI: Haitian students led protests on Thursday in response to the kidnapping and killing of a high school senior, Evelyne Sincère. Protesters demanded accountability for the young woman’s death. Sincère was found in a trash pile on November 1 after her relatives were unable to pay the ransom that her kidnappers demanded. Almost 2,000 protestors marched to the Ministry of Justice and Public Security carrying photos of Sincère. Police later used tear gas to disperse the protesters. The National Police have a suspect in custody, Joseph Obed, Sincère’s boyfriend. The United Nations has raised concerns about rising gang violence in the country, where the police force has been ineffective. Independent rights organizations have recorded at least 162 kidnappings so far in 2020, with 55 of the victims being women.

REGION: Hurricane Eta has left at least 57 confirmed dead in Central America, but the total number of casualties and the extent of damage is still unknown, as many communities are cut off by the collapse of roads. Rescue teams and search parties are underway in multiple countries. In Guatemala, search teams dug through a landslide on Friday where at least 100 are thought to be buried. Panama’s government organized an “Operation Homeland” to start a search and rescue team, as well as open and manage shelters for the victims of the natural disaster. Hundreds of families in Honduras and Guatemala were trapped on the rooftops of their homes for over a day, with local fishermen lending their boats to official rescue teams to help reach them. The hurricane made landfall in Cuba on Sunday as a tropical storm and is expected to hit Southern Florida, where Gov. Ron DeSantis declared a state of emergency on Saturday.

UNITED STATES: Latin American leaders congratulated United States President-elect Joe Biden and Vice President-elect Kamala Harris on their victory over incumbent Donald Trump over the weekend, with a few notable exceptions. Bolivian President Luis Arce tweeted his congratulations to Biden and Harris just hours after taking office himself, and expressed hope that bilateral relations will improve under the new government.

In Mexico, President Andrés Manuel López Obrador declined on Sunday to congratulate Biden, saying that he will wait until the legal challenges to the former vice president’s victory have run their course. López Obrador made reference to his own experience in the 2006 Mexican presidential election, where he lost by a razor-thin margin in an election plagued by irregularities, and foreign leaders congratulated his opponent Felipe Calderón before vote-counting ended. For his part, Brazilian President Jair Bolsonaro also has yet to address the results.

MEXICO: Mexico’s National Election Institute (INE), an independent body that regulates the electoral process, is clashing with the Senate over gender parity rules for candidates in the 2021 gubernatorial elections. The INE ruled that for the 15 governorships that will be up for grabs next year, each party must nominate at least seven women candidates. Senators from most Mexican political parties–excluding the Labor Party (PT)–expressed their opposition to the ruling and questioned the INE’s authority on the matter. Ricardo Monreal, chair of the Political Coordination Committee and a member of the Morena party, said that the power to create such rules lies with the legislature and that the Senate will exhaust all judicial resources to prevent the INE’s ruling from taking effect. Senator Dante Delgado, of the Citizens’ Movement (MC) party, pointed out that a 2007 constitutional reform excluded executive offices like governorships from gender parity rules.

MEXICO: A federal judge ruled on Friday that there is enough evidence to continue criminal proceedings against nine sailors from the Mexican Navy for the 2018 forced disappearance of Julio César Viramontes Arredondo in the border city of Nuevo Laredo, Tamaulipas. However, in an unusual move, the judge decided not to issue arrest warrants for the nine defendants, all members of the elite Navy Special Operations Unit, and to allow them to remain free during their trials.The National Human Rights Commission has linked the Navy to 27 forced disappearances and extrajudicial executions in Nuevo Laredo between February and May of 2018. Prosecutors have opened several investigations into those events, but this is the first case that has been accepted by a judge.