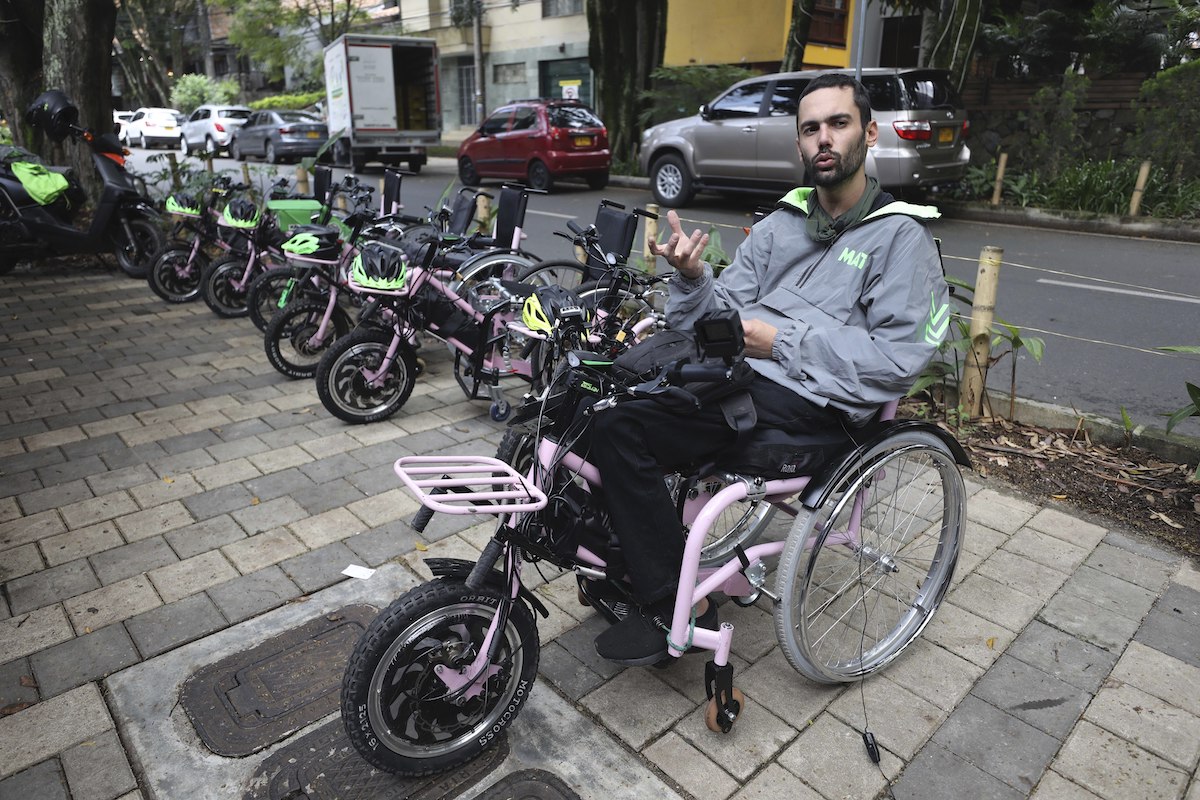 Martín Londoño, owner of MATT, an electric wheelchair tour company talks during an interview in Medellín, Colombia, Wednesday, November 18, 2020.  Londoño, 31, started to work on the hand-cycles four years ago in a bid to improve his own mobility. He lost the use of his legs after breaking his spinal chord in a traffic accident at age 18. (AP Photo/Fernando Vergara)

MEDELLÍN, Colombia (AP) — Wilson Guzmán lost the use of his legs at age 17 when he was shot in the back while trying to recover a stolen bicycle in his hometown of Medellín, Colombia.

Two decades later, he glides through the city’s streets using an electric hand-bike attached to the front of his wheelchair. He recently gave a tour of Medellín’s parks to seven people who followed him down bike lanes and up steep hills on similar vehicles.

“Every person who gets on these wheelchairs leaves with a smile,” said Guzmán. “They also learn what it’s like to be in the shoes of someone with a disability.”

The wheelchair tours that Guzmán leads once a week are the latest tourist attraction in a city that is slowly shedding its reputation for drug violence and has become one of Colombia’s most visited destinations.

They’re organized by MATT —which stands for Mobility, Accessibility, Time and Work— a start-up founded last year that aims to create jobs for people with disabilities.

For the equivalent of $25, both people who can and can’t walk can get on the electric wheelchairs and take the three-hour tour of the city’s riverside parks, which includes stops at a coffee shop and a bar that does beer tasting. The devices accelerate quickly and can reach speeds of 30 kph (19 mph).

“We think this will be a winning proposal in terms of education and inclusion,” said company founder Martín Londoño.

The tours started in October and their routes are still being adjusted. Londoño said he wanted to offer them earlier this year but had to delay the launch due to the coronavirus pandemic and travel restrictions imposed by the Colombian government, which were lifted in September. 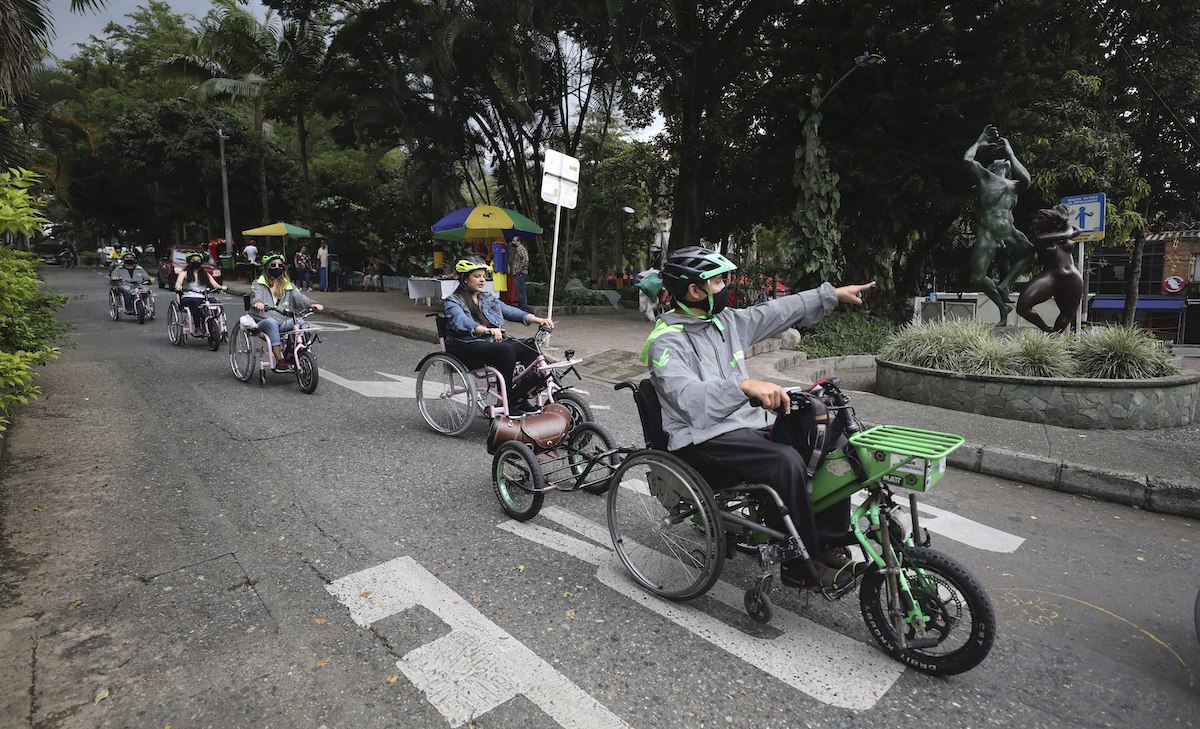 The hand-cycles, built and designed with the help of local bike workshops, are powered by rechargeable batteries and latch on to wheelchairs with metal bars and hooks. The steering and brakes are like those on a regular bicycle, while accelerating only requires pushing a button on one of the handles.

Londoño, 31, started to work on the hand-cycles four years ago to improve his own mobility. He lost the use of his legs after breaking his spinal chord in a traffic accident at age 18.

Londoño took inspiration from Batec, a Spanish company that makes electric hand-bikes and sells them for between 4,000 and 6,000 euros. He wanted to make a version that was more affordable for people in Colombia, where the minimum wage is about $250 a month.

After several attempts, Londoño managed to build a functional hand-bike for himself, but his efforts to sell them for around $2,000 weren’t successful.

“We realized that most people with disabilities in Colombia have very meager incomes,” said Londoño, who grew up in a wealthy neighborhood of Medellin and graduated from an international school. “They have no employment and many can’t even afford a regular wheelchair.”

Londoño changed his business model and founded MATT. With his savings and those of his business partners, Londoño has built a fleet of 15 hand-cycles. Three of them have been leased to people with disabilities who work for a delivery service set up by MATT this year.

Londoño charges the delivery workers a monthly fee of $90 and says they will be allowed to keep the hand-bikes once they have paid for them.

MATT uses the remaining hand-bikes for its wheelchair tour, which is still in its early days and will have to compete against more famous attractions, including tours of places associated with drug lord Pablo Escobar, a museum featuring the works of artist Fernando Botero and a cable car that ascends a steep mountain to a pristine cloud forest.

Martín Londoño, left, owner of MATT, an electric wheelchair tour company, rides with some of his clients during a tour in Medellín, Colombia, Wednesday, November 18, 2020. (AP Photo/Fernando Vergara)

Londoño says he is trying to promote his tour on social media while building partnerships with local travel companies. He dreams of taking the wheelchair tours to other cities in Colombia, Latin America and the United States.

“This is another way to show how our city is changing” said Valeria Toro, a Medellín travel agent who wants to list it on offerings for travel companies overseas. “It’s an experience that people are not likely to forget after they go back home.”