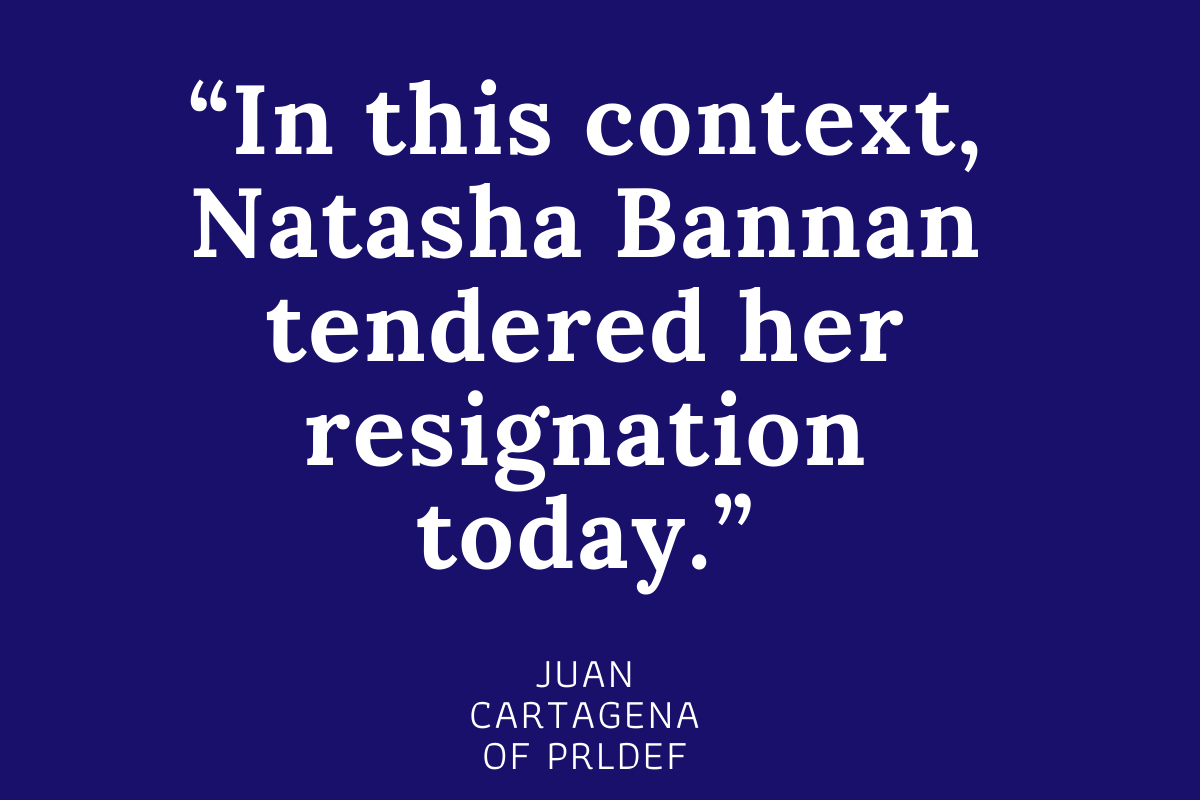 A statement issued Saturday night by the head of LatinoJustice PRLDEF said that the organization’s senior counsel, Natasha Lycia Ora Bannan, submitted her resignation. The news comes after a Thursday story published by Prism revealed that Bannan was a white woman from Georgia who had pretended to be Colombian and Puerto Rico, and “since at least 2006… [had] accepted opportunities expressly intended for Latinas and other people of color.”

LatinoJustice PRLDEF’s About section no longer lists Bannan as an employee of the organization.

The statement from Juan Cartagena, who heads up the 50-year-old national civil rights organization, said that “revelations of the recent reportage were serious matters that required immediate attention.”

“We cannot accept actions that displace Latinos and Latinas, included within our own movement,” Cartagena said on Saturday night. “These acts conflict with the mission and values of LatinoJustice. Ms. Bannan’s actions, regardless of intent, have caused harm not only to those who were displaced by her role in the movement but also to those who have been her allies and collaborators. In this context, Natasha Bannan tendered her resignation today.”

The Saturday night PRLDEF statement was a clear departure from what Cartagena told Prism journalist Tina Vásquez in the January 7 article: “Natasha Lycia Ora Bannan is a valuable member of our staff serving as Senior Counsel to us for years. Her race and ethnicity have had no bearing on the quality of her work for LatinoJustice and for our clients.”

On Friday, the day after the Prism article broke, Cartagena issued a previous statement that was more diplomatic in nature, leaving open the benefit of the doubt to the Bannan story.

By Saturday, Bannan had resigned from the organization.

Since the publication of the Prism article, Bannan’s Facebook profile is now no longer available. However, there are several public posts of support for her. Bannan’s one-public Twitter profile is now private, although before it became private, she had tweeted a publich thread response on January 7 to the Prism article. Here is the text of the one-public tweets in the order of how they were tweeted:

For those interested in learning more about my story, here is an updated version of my post from 5 yrs ago:

I have long said that identity is deeply personal, and mine has always been a journey. It is shaped by my upbringing, my family, my community and my work. From early on, but definitely as an adult, I wanted and have tried to live a life of meaning

meaningful work that uplifts our people. My identity is intricate, like that of many people. I am racially white and I identify as Latina because of the culture I was raised in. I grew up in a mixed home, culturally and in many other ways.

my own and who has showed me over and over again what revolutionary love is. My decision to choose a life dedicated to seeing a free Puerto Rico, a Colombia that values peace and a region that rejects imperialism and colonialism is how I both honor my family and community

while using my privilege as a racially white, U.S.-based woman to denounce the aggressions of this country. By doing so, I hope to honor them and to continue the examples they have shown me of what radical love looks like.

world, my identity as a Latina has defined and shaped my work, who I do it with and for, my solidarity and my commitment to collective liberation. My work in the region is a reflection of this commitment to a continent whose struggle for dignity and self-determination has shaped

a whole in our lives. My Puerto Rican extended family that perhaps above all was where my identity took root on its own, in them and in an island that I knew long ago I would give my life for. My identity as a Latina comes from my most profound relationships, my immediate and

in our house, two languages were spoken. It comes from translating for family members and helping them navigate hostile and foreign systems that were not made to accommodate them. And it comes from knowing that in the most difficult and soul-wrenching times of my life, I know

extended family, and the most authentic and defining moments of my life. It comes from the birthdays and navidades celebrated to the backdrop of salsa, rum and tired children. From feeling defensive as a child because I had to explain to people who came to my home that

Because Latinidad is not synonymous with race, none of this means that I don’t also experience life as a racially white person or experience and benefit from white privilege. Both are truisms. While my whiteness and the benefits afforded to it by white supremacy will always

My biological origins are Italian, atheist Jewish and some unknown. My biological parents were born in the United States, and I was raised with only one of them, with either little to no real connection to either the people or cultures of either side.

My Colombian stepfather and family who I grew up with were responsible in grand part for shaping me and forming my character and identity. My Peruvian stepfather who was actually the father that helped guide and protect me over decades left us this past year and with his absence,

exactly who my family is and that their unconditional love is what sustains me. While I always felt constrained and restricted by identity growing up, now I feel liberated by it, and choose to celebrate and honor who I am and who they are. I am because of them.

Latino Rebels had previously published Bannan’s work, but after consideration of the Prism article, a decision to remove her four contributions to this site was made, as well as the removal of two videos on the site’s Facebook page. Last year, Latino Rebels founder Julio Ricardo Varela hosted a series of shows for LatinoJustice. He did not receive any compensation for the shows.

Hi, @_kevindc_, thanks for tweeting to us. FYI, we decided to remove the 4 posts of Natasha Bannan on our site. We have also removed the 2 videos she was on as a guest of a show we did pro bono work for.https://t.co/g2bZEfrghG

Varela was also quoted in the January 7 Prism article about Bannan. Here is what Prism reported:

Puerto Rican journalist and founder of Latino Rebels, Julio Ricardo Varela, said he was “shook” by the revelation. Bannan appeared on a radio program with Varela and two other actual Puerto Rican commentators. Varela said he was “impressed” by Bannan’s knowledge and later hosted a few online shows with her as a guest.

“I’m really shocked,” Varela said, noting that Bannan and her work are deeply respected. “I had no idea she actually wasn’t Puerto Rican. I don’t understand why she couldn’t just say: ‘I’m a white person and I want to be an ally.’ We need allies, but now I’m thinking about all of the badass Puerto Rican women attorneys whose voices were left out because [Bannan] was uplifted as an expert.”

Editor’s Note, January 10, 2021, 6:45pm ET: After deactivating her Facebook profile over the weekend, Bannan reactivated it and shared the following public post, where she offers an apology “to those who feel harmed.” Her Twitter profile is public again. 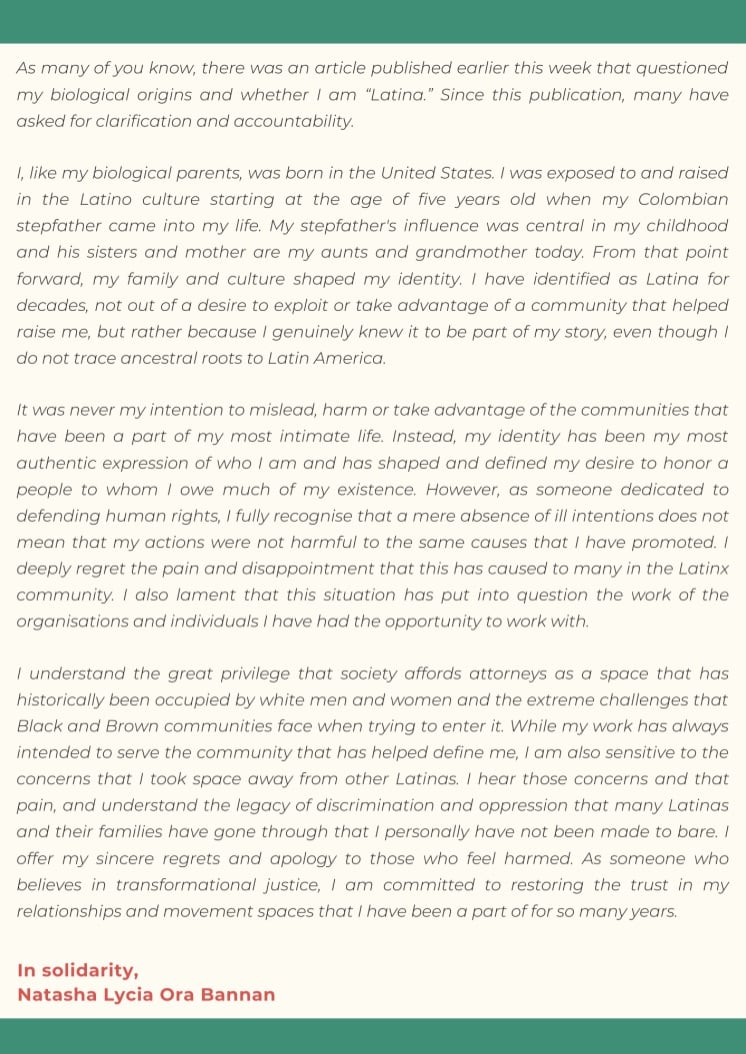