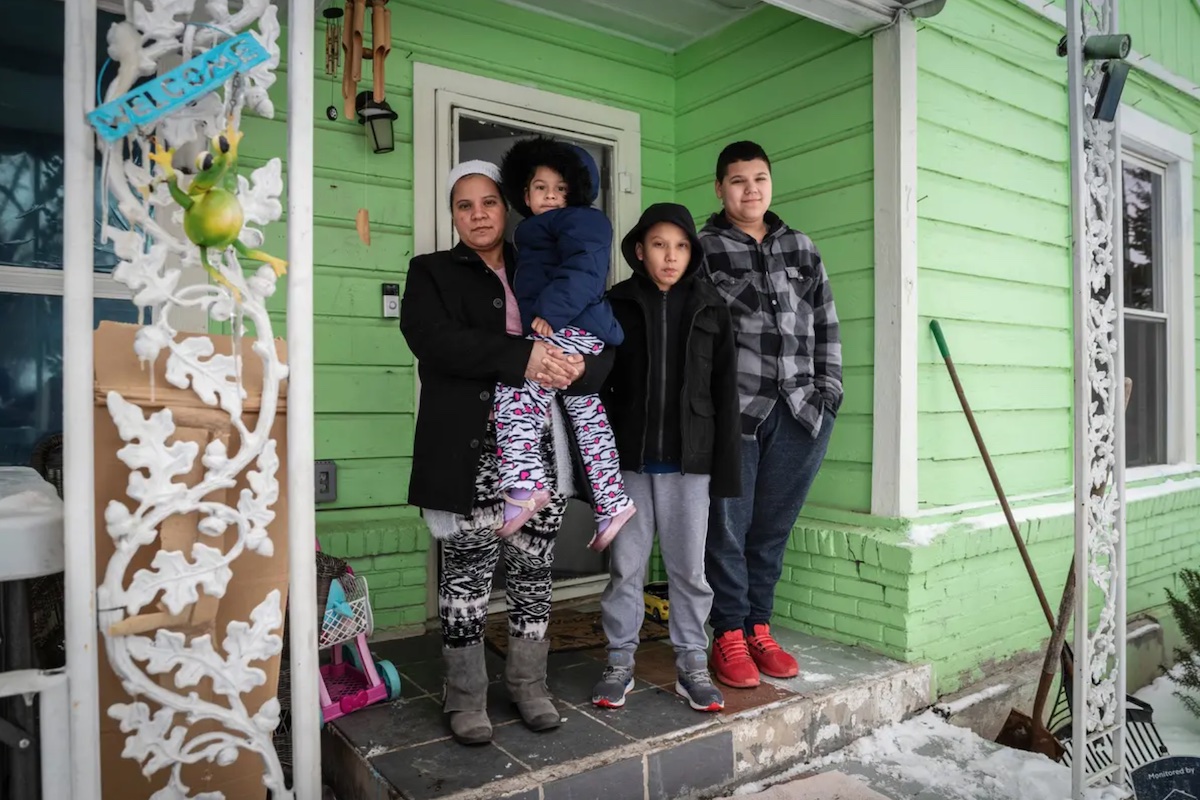 Marleny Almendarez, 38, with her niece Madelyne Hernandez, 3, and two boys, Aaron Hall, 11, and Matthew Hall, 14, outside their home in Dallas on February 18, 2021. The family spent two nights at a mobile warming station to avoid the cold temperatures. (Credit: Ben Torres for The Texas Tribune)

The Texas Tribune is a nonprofit, nonpartisan media organization that informs Texans —and engages with them— about public policy, politics, government and statewide issues. This story was originally published by The Texas Tribune here.

As Texas faced record-low temperatures this February and snow and ice made roads impassable, the state’s electric grid operator lost control of the power supply, leaving millions without access to electricity. As the blackouts extended from hours to days, top state lawmakers called for investigations into the Electric Reliability Council of Texas, and Texans demanded accountability for the disaster. We have compiled a list of resources for Texans who are seeking help, or places to get warm. To get updates sent straight to your phone, text “hello” to 512-967-6919 or visit this page to sign up. MORE IN THIS SERIES

Neighborhoods across the state —some lined with million dollar homes, others by more modest dwellings— went cold and dark for days as Texas struggled to keep the power on during a dangerous winter storm. But while the catastrophe wrought by unprecedented weather was shared by millions left shivering in their own homes, the suffering was not equally spread.

For low-income Texans like Marleny Almendarez, a single mother of two without reliable income to pay the bills, surviving the massive weather event was made harder by financial and structural imbalances that almost ensure the most marginalized Texans bear the heaviest burdens of natural disasters.

As darkness enveloped her freezing home for a second night Tuesday, Almendarez was prepared to sleep in her car with her kids.

They had made it through Monday night huddled under as many blankets as she could find, in an aging home where three family generations live —eight people total— in the majority Hispanic and Black neighborhood of Pleasant Grove in Dallas. The house was so cold that her pet parrot froze to death overnight.

“I grabbed all my stuff and said ‘We are leaving, I’m not going to sleep under 38 degrees again,’” she said in Spanish. “This is a house that is not in very good conditions, it’s an old house. We spend a lot on electricity because it’s not well insulated.”

On Tuesday night, she traded her plans to spend the night in her red 2001 Toyota Corolla for a nearby charter bus that the city set up as a mobile warming station. Finally, they were warm and Almendarez was able to charge her drained cellphone.

Even in her desperation to keep her children safe, she was already worrying about how the family would keep the lights on at home after power was finally restored.

In the last year, some members of her household lost their jobs to the coronavirus pandemic. They all contracted the virus in July after her mother was infected while cleaning homes to help pay the bills. Almendarez, recovering from a 2017 aneurysm that forced her to relearn how to speak and recover mobility in her body, started picking up babysitting and cleaning gigs in the summer after they went into debt to cover their utilities.

The storm and the outages were simply an added layer of pain onto what has already been a hellish year for Hispanic families in her neighborhood and across the state.

“It has been infinite sadness. Many people have lost their jobs, have lost relatives and you feel helpless, not being able to do anything,” she said.

Low-income Texans of color bore some of the heaviest weight of the power outages as the inequities drawn into the state’s urban centers were exacerbated in crisis. And already more impacted by unemployment and devastation of the pandemic, their troubles won’t end after the storm clears and the heat is running again in their homes.

As temperatures dropped into single digits in Austin, electricity was kept on in neighborhoods sharing circuits with critical facilities like hospitals—facilities less commonly found in poor communities or those whose residents are predominantly Black and Hispanic.

While some Texans escaped to nearby hotels, those who could never afford that option watched the food in their refrigerators —and the precious dollars spent on it— spoil in front of them.

Cities rushed to set up warming centers to offer cold residents some respite. But with public transportation shut down, those without their own cars were left further out in the cold.

Desperate but too poor to escape the cold, some San Antonio residents with cars relied on local mutual aid organizations for funds to get enough gas in their tanks to relocate.

And even as they endured a crisis brought on by weather, low-wage workers and families without a financial safety net are bracing for the next emergency—how will they make ends meet when they’ve been unable to get to work.

“It’s short of a nightmare,” said Letitia Plummer, a city council member in Houston where about 60% of homes and businesses were without power during the storm. “We are already poor and our communities are already devastated in many ways.… We are always in a disadvantage, so when one incident happens, it makes us fall so much harder.”

Local leaders, particularly those representing mostly Black and Hispanic communities, pointed out that neighborhoods with mostly Black and Hispanic residents tend to have older homes with bad insulation, leaking roofs and older pipes that make them less likely to withstand extreme weather. In the case of Almendarez, this has led to power bills of up to $500 during the summer.

With the state’s food supply chain also buckling under the storm’s strain, those local leaders are worried about the fallout for areas that lack grocery stores and pharmacies. Plummer said during the storm, the few store shelves in those neighborhoods emptied fast and older people had trouble finding medication.

It’s what Jill Ramirez, the CEO of the Latino HealthCare Forum, describes as “chickens coming home to roost” in tragic times.

“When you didn’t invest in the whole community equally, then you’re going to see the disparity when we get into situations like this,” said Ramirez, whose nonprofit typically focused on community-based health outreach has in recent days been trying to connect low-income Texans —many of them Spanish speakers— with help to make it through the cold. “Everything is hooked up again to the same inequity.”

In the Houston neighborhood of Independence Heights, a historically Black community that is slowly attracting white residents, Tanya Debose surveyed her neighbors over social media to see how they were weathering the storm. She found that while some of her white neighbors had generators on hand or booked hotel rooms, her Black and brown neighbors were almost all still in the dark.

“It’s very clear who is in the deep now,” Debose, the executive director of the Independence Heights Redevelopment Council, said on Wednesday before power began to be restored more broadly across the state.

On top of these challenges, some communities had to endure the cold temperatures with little or no information about what was going on and what options they had to solve their problems.

“Nothing was translated or targeted to our non-English speaking communities. That’s an easy fix and I feel that more needs to be done there,” said Dallas City Council member Adam Bazaldua, whose district includes Hispanic and Black neighborhoods in the southeast part of the city.

In the days after widespread power outages roiled the state, community advocates and local leaders repeatedly drew the parallels between what they’d learned so far about the storm’s toll on Texans of color and the pandemic’s disproportionate devastation on mostly Black and Hispanic communities. Even as more than half of the deaths due to COVID-19 have been Black or Hispanic people, advocates have reported that these communities have fallen behind in the vaccination efforts.

“We know that historically the communities that are marginalized tend to be the ones that are hit the hardest, whether we talk about COVID-19 or power outages,” said Jaime Resendez, a city council member who represents the predominantly Hispanic southeast portion of Dallas. “If history serves as a guide, these communities could also be the last ones to get the attention and service that they need.

Without steady power in her apartment for more than 24 hours, Mercedes Matute’s refrigerator stood empty by Tuesday after they ran out of food and couldn’t find more than some Cheetos and sodas in one of the few open stores in her neighborhood.

The 48-year-old fast food worker in Houston had been struggling to cover her bills with the wages she was making during her roughly three-hour shifts. She had managed to pay this month’s rent, but with restaurant where she works shut down during the storm, she isn’t sure she’ll have enough money to do so in March.

But for now, her most immediate concern is figuring out how to keep her four grandchildren, who live with her, fed the rest of the month.

“Between light, rent, the car’s license and the insurance, I’m left with nothing. Thankfully we have food stamps, but we are out until the next month,” Matute said. “I can hold it and be hungry all day, maybe two days, but not the kids. They need food.”

Mandi Cai and Carla Astudillo contributed to this report.