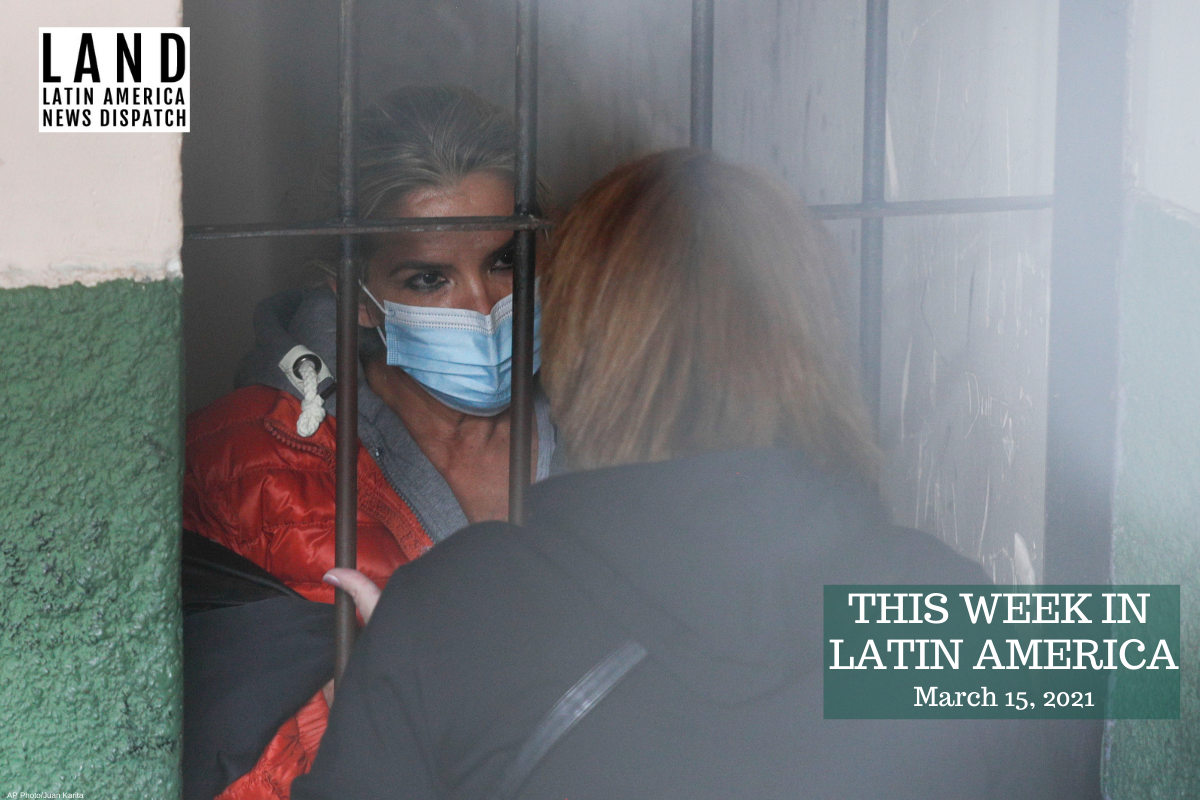 BOLIVIA: Former interim President Jeanine Áñez was arrested Saturday for her role in the November 2019 coup that ended the 13-year rule of President Evo Morales. Áñez led the country for almost a year between the political crisis following the contested elections of 2019 and the inauguration of current President Luis Arce. The turmoil began in late 2019 when socialist president Evo Morales sought a fourth term in office. A contested vote count in the first round led to protests. After the military called for him to step down, saying he had tried to rig the vote to avoid a runoff, Morales fled the country and the military took power in the interim in what critics called a coup. During this time, Áñez, then a senator, became interim president, and her administration tried to prosecute Morales and members of his party.

A new round of presidential elections were held in October 2020. Luis Arce, from Morales’ MAS party, won the presidency definitively, despite concerns that the military might not cede power. Since then, Morales has returned to Bolivia and is acting as one of Arce’s advisors. Áñez was arrested on Saturday and charged with terrorism, sedition and conspiracy. Several other members of the interim government have also been arrested, including former General Williams Kaliman, who led Bolivia’s armed forces under Morales and joined calls for his resignation in November 2019. Morales has publicly called for the interim government to be investigated and punished for ousting him from power. Áñez says she committed no crimes and calls the arrest an act of political persecution.

Since 2014, over 5 million Venezuelans have left their country amidst the worst economic crisis in its history, 1.7 million of which have settled in Colombia. The fact that more than half of Venezuelan refugees in Colombia are undocumented is causing problems for international aid organizations, who are struggling to connect with refugee communities to deliver aid. In that context, Venezuelan activists like 36-year-old Maryluis Ruiz are stepping up to organize their communities to make connections with aid organizations. 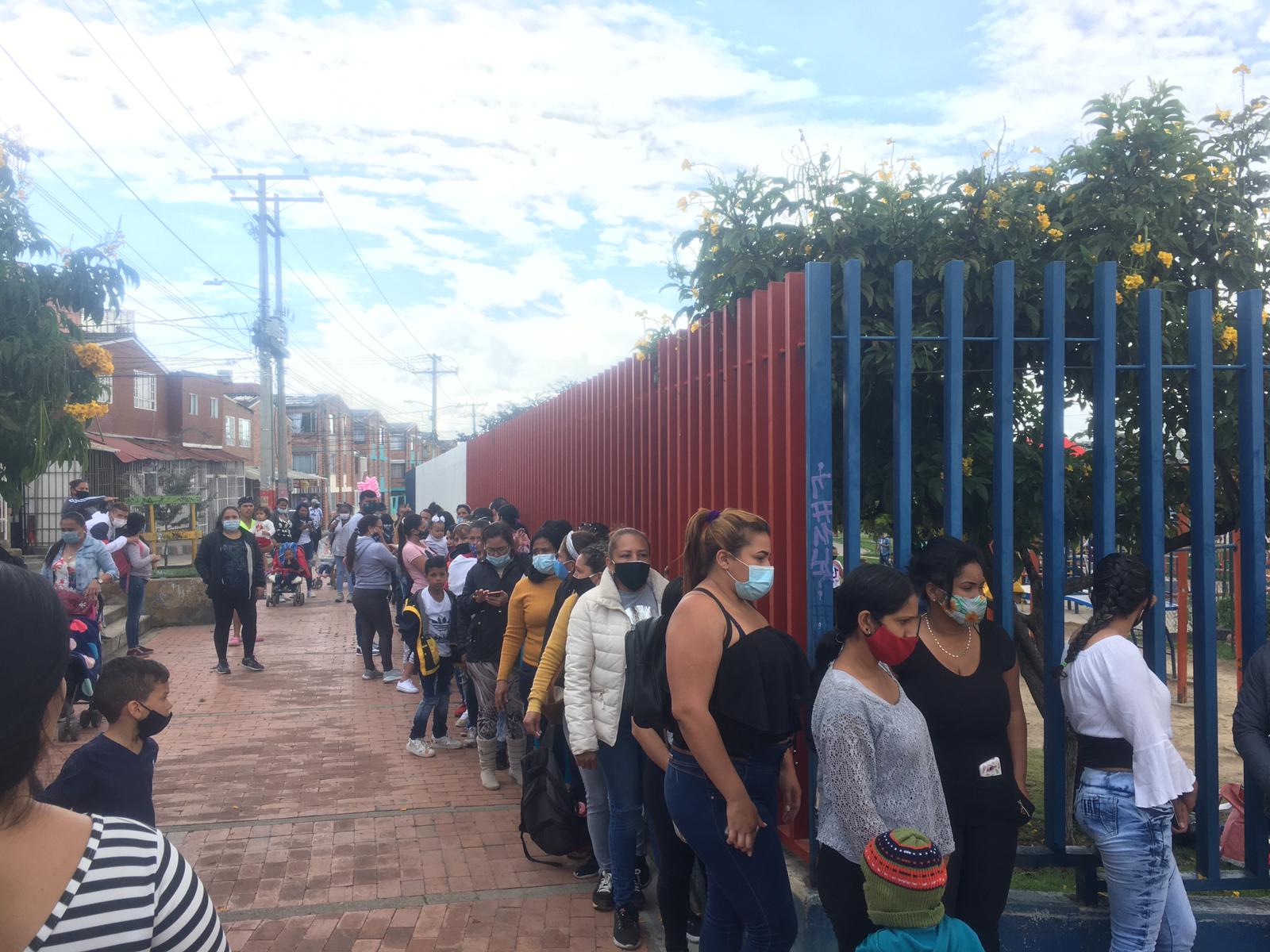 ARGENTINA: Former President Mauricio Macri was charged with fraud and embezzlement by the Anti-corruption Office (OA) on Friday. He is accused of circumventing legal procedures in securing a $55 billion loan from the International Monetary Fund (IMF) while he was president. Several others have been accused of participating, including two cabinet officials in the Macri administration and two former presidents of the Central Bank of Argentina. The recent charges are the result of an investigation announced two weeks ago by current president Alberto Fernández, who has heaped criticism on his predecessor. Many see this as a political move to increase approval for Fernández by further discrediting Macri.

BRAZIL: Two corruption convictions against former President Luiz Inácio “Lula” da Silva were dismissed last week. The dismissal means that Lula is free to run for president in Brazil’s elections next year. Lula, a leftist whose time in office from 2003 to 2010 was marked by an economic boom, left office with 80% approval ratings and was a popular candidate for the 2018 elections. His run was interrupted by the now-overturned conviction, allowing rightwing Jair Bolsonaro to win the presidency on an anti-corruption campaign. Lula spent about a year and a half in prison, before being released in 2019 pending the resolution of appeals. Despite this ruling, the recent dismissal can still be appealed, and Lula faces other accusations. He has not yet announced plans to run for office next year, but a day after the decision he gave a speech criticizing how Bolsonaro has handled the pandemic, in what many believe is the start of a fight for the presidency.

COLOMBIA: Defense Minister Diego Molano faces calls to resign after making insensitive comments last Wednesday about children killed in a recent air strike. On March 2, the military bombed a camp being used by a drug trafficking criminal group, killing 12 people. At least one minor was confirmed as one of the victims, and local news outlets reported several or all of the victims may have been minors. In response to those reports, Molano dismissed their deaths as deserved, referring to minors involved in the conflict as “war machines” and insisting that the strike was legal. Outrage surged on social media, with people decrying Molano’s statement and the current administration’s apparent lack of action to protect its citizens. President Iván Duque has been repeatedly criticized by human rights groups for not doing more to stop violence against social leaders and mass killings. The United Nations reported 66 massacres which left 255 people dead, in addition to the murder of 120 human rights defenders last year.

HAITI: Four police officers died and eight were injured in a failed anti-gang raid in the Port-au-Prince neighborhood of Village de Dieu on Friday. For several months, the police have been fighting with the 5 Segonn gang for control of the neighborhood, which has become a flashpoint for kidnappings. The police were on a rare incursion into the neighborhood when they were ambushed by members of the gang. The attackers also seized two police vehicles, one of which was set on fire, as well as several automatic weapons and body armor,according to AFP. Meanwhile, embattled President Jovenel Moïse called for a truce with the political opposition in order to confront the problem of criminal violence.

CUBA: The Foreign Ministry of Cuba released a statement blasting a United States immigration policies that they say encourage dangerous irregular emigration from the island. Specifically, the statement claimed that the refusal of the U.S. Embassy in Havana to issue visas to Cubans pushes many to attempt to reach the United States by water on risky illegal boats. Earlier this month, a boat carrying about 20 Cuban migrants capsized near the Bahamas. Twelve survivors and one deceased person have been rescued by the Royal Bahamas Defence Force, but several others remain missing, including two minors and their mother.

HONDURAS: Hondurans voted in primary elections on Sunday to decide who will represent major parties in the race to replace President Juan Orlando Hernández in November. According to exit polls, Tegucigalpa Mayor Nasry Asfura, an ally of the president who is facing investigation for misuse of public funds, beat out a rival for the nomination of Hernández’ National Party. Xiomara Castro, wife of former President Manuel Zelaya, who was ousted in a 2009 coup, will represent the leftist LIBRE party, while Yani Rosenthal, a member of Zelaya’s cabinet, will be the Liberal Party’s candidate. Honduran election authorities say they will release official results later on Monday.

GUATEMALA: The remains of 16 Guatemalan migrants who were killed in a massacre in the Mexican state of Tamaulipas in January were laid to rest after a ceremony in their hometown of Comitancillo last week. President Alejandro Giammattei declared three days of national mourning and promised that he would pursue justice in the case. The 16 Guatemalans were among 19 migrants whose remains were found in a burnt-out van near the Mexico-United States border earlier this year. Twelve Tamaulipas police officers have been arrested in connection with the massacre.

MEXICO: Mexico City registered 5,712 additional deaths than were previously expected in February, according to a report by city government. That figure represents a 75% decrease compared to January, the deadliest month since the beginning of the pandemic. The worst day reported was January 18, with 634 extra deaths than previously expected.

The 10 states with the highest death counts are Mexico City, the State of Mexico, Jalisco, Puebla, Guanajuato, Nuevo León, Veracruz, Baja California, Sonora, and Coahuila, together accounting for more than half (64.9%) of the country’s deaths. Mexico City alone accounts for 19.3% of all deaths nationwide.

MEXICO: Thousands of women marched in Mexico City last Monday to mark International Women’s Day. The protests targeted controversial decisions by President López Obrador related to gender politics, like the nomination by the president’s Morena party of Félix Salgado, who has been accused of rape by two women, for the governorship of Guerrero.

In anticipation for the March 8 demonstrations, the government placed tall steel anti-riot barricades in front of the National Palace. López Obrador said that the barricades were put in place in order to avoid confrontations between police and protesters. The barricades were quickly adorned with flowers and the names of female murder victims. Sixty-two officers and 19 civilians were injured during the march.

Want to receive Today in Latin America directly to your inbox? Sign up here.