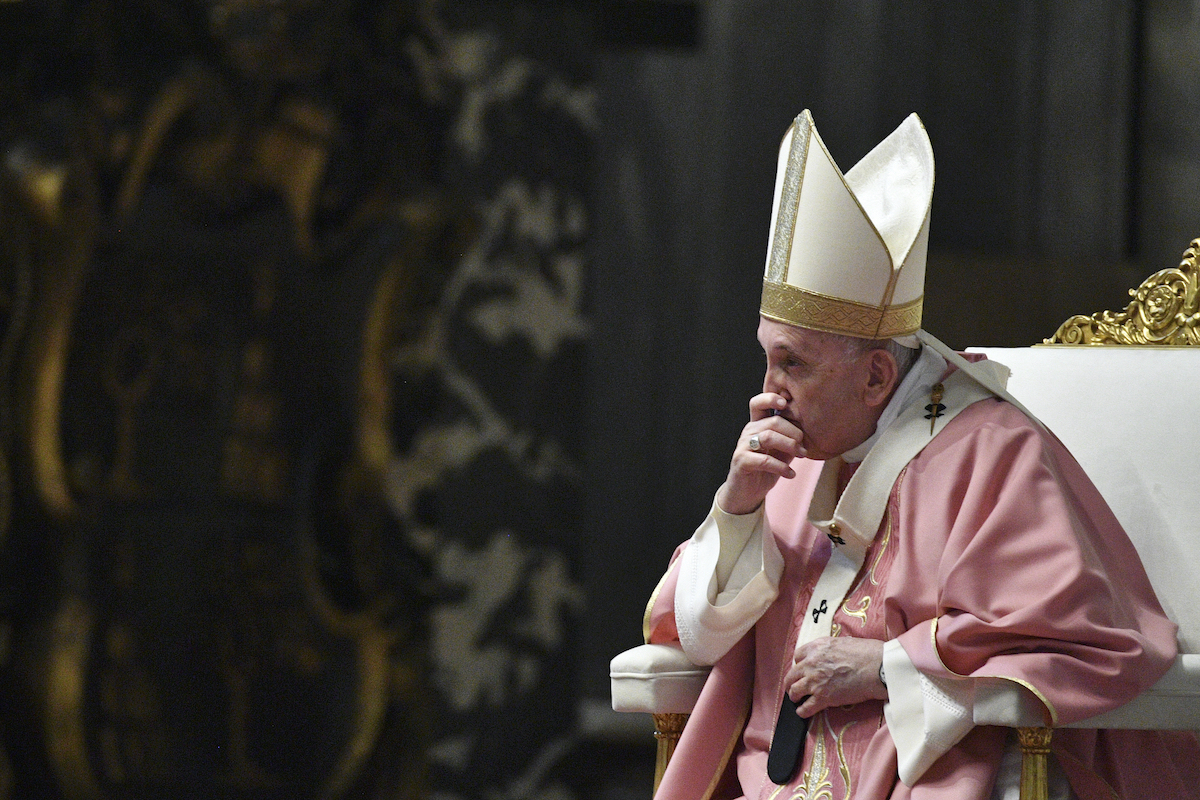 Pope Francis celebrates mass on the occasion of 500 years of Christianity in the Philippines, in St. Peter’s Basilica, at the Vatican, Sunday, March 14, 2021. (Tiziana Fabi/Pool photo via AP)

The Vatican’s orthodoxy office, the Congregation for the Doctrine of the Faith, issued a formal response to a question about whether Catholic clergy have the authority to bless gay unions. The answer, contained in a two-page explanation published in seven languages and approved by Pope Francis, was “negative.”

The note distinguished between the church’s welcoming and blessing of gay people, which it upheld, but not their unions. It argued that such unions are not part of God’s plan and that any sacramental recognition of them could be confused with marriage.

The note immediately pleased conservatives, disheartened advocates for LGBT Catholics and threw a wrench in the debate within the German church, which has been at the forefront of opening discussion on hot-button issues such the church’s teaching on homosexuality.

Francis DeBernardo, executive director of New Ways Ministry, which advocates for greater acceptance of gays in the church, predicted the Vatican position would be ignored, including by some Catholic clergy.

“Catholic people recognize the holiness of the love between committed same-sex couples and recognize this love as divinely inspired and divinely supported and thus meets the standard to be blessed,” he said in a statement.

The Vatican holds that gay people must be treated with dignity and respect, but that gay sex is “intrinsically disordered.” Catholic teaching says that marriage is a lifelong union between a man and woman, is part of God’s plan and is intended for the sake of creating new life.

Since gay unions aren’t intended to be part of that plan, they can’t be blessed by the church, the document said.

“The presence in such relationships of positive elements, which are in themselves to be valued and appreciated, cannot justify these relationships and render them legitimate objects of an ecclesial blessing, since the positive elements exist within the context of a union not ordered to the Creator’s plan,” the response said.

God “does not and cannot bless sin: He blesses sinful man, so that he may recognize that he is part of his plan of love and allow himself to be changed by him,” it said.

Francis has endorsed providing gay couples with legal protections in same-sex unions, but that was in reference to the civil sphere, not within the church. Those comments were made during a 2019 interview with a Mexican broadcaster, Televisa, but were censored by the Vatican until they appeared in a documentary last year.

While the documentary fudged the context, Francis was referring to the position he took when he was archbishop of Buenos Aires. At the time, Argentine lawmakers were considering approving gay marriage, which the Catholic Church opposes. Then-Cardinal Jorge Mario Bergoglio instead supported providing legal protections for gays in stable unions through a so-called “law of civil cohabitation.”

Francis told Televisa: “Homosexual people have the right to be in a family. They are children of God.”

Speaking of families with gay children, he said: “You can’t kick someone out of a family, nor make their life miserable for this. What we have to have is a civil union law; that way they are legally covered.”

In the new document and an accompanying unsigned article, the Vatican said questions had been raised about whether the church should bless same-sex unions in a sacramental way in recent years, and after Francis had insisted on the need to better welcome gays in the church.

It was an apparent reference to the German church, where some bishops have been pushing the envelope on issues such as priestly celibacy, contraception and the church’s outreach to gay Catholics after coming under pressure by powerful lay Catholic groups demanding change.

In a statement, the head of the German bishops’ conference, Bishop Georg Bätzing, said the new document would be incorporated into the German discussion, but he suggested that the case was by no means closed.

“There are no easy answers to questions like these,” he said, adding that the German church wasn’t only looking at the church’s current moral teaching, but also the development of doctrine and the actual reality of Catholics today.

Bill Donohue, president of the conservative Catholic League, praised the decision as a decisive, non-negotiable “end of story” declaration by the Vatican. 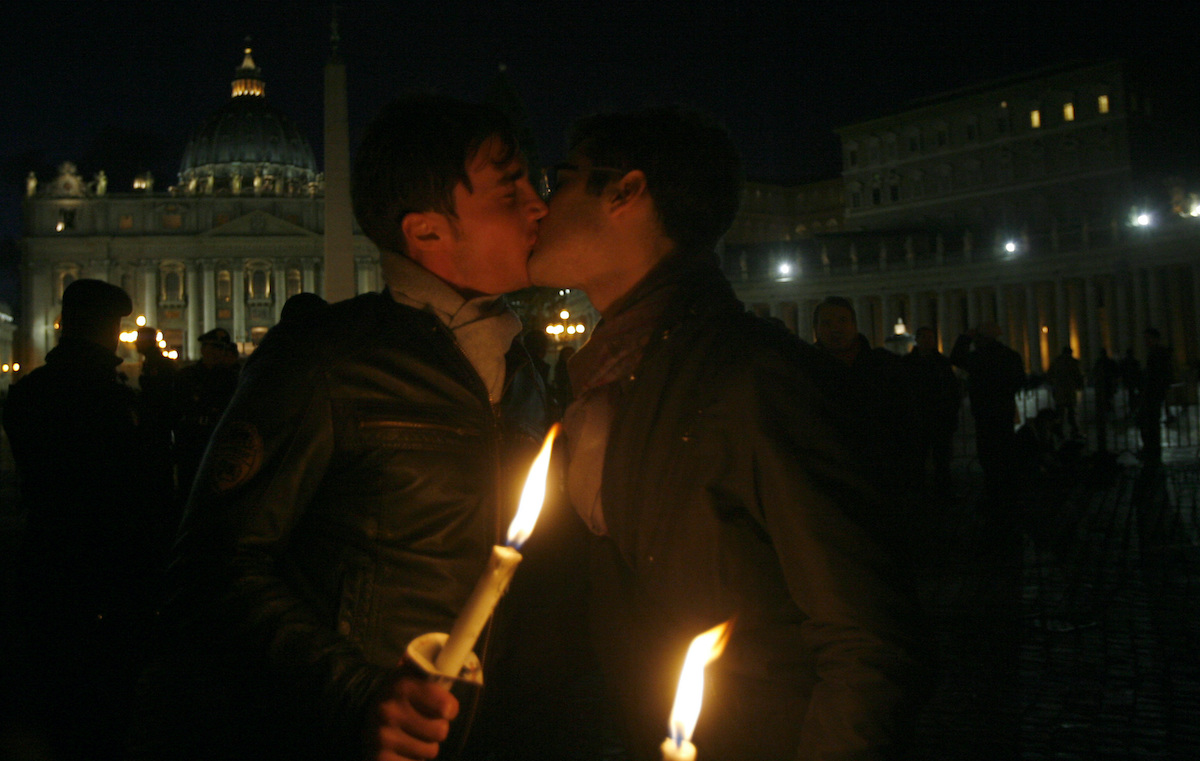 In this Saturday December 6, 2008 file photo two men kiss each other outside St. Peter’s Square at the Vatican during a candle-lit demonstration for gay rights. (AP Photo/Alessandra Tarantino, File)

“The Vatican left nothing on the table. The door has been slammed shut on the gay agenda,” Donohue wrote on the League’s website, calling the document “the most decisive rejection of those efforts ever written.”

In the article, the Vatican stressed the “fundamental and decisive distinction” between gay individuals and gay unions, noting that “the negative judgment on the blessing of unions of persons of the same sex does not imply a judgment on persons.”

But it explained the rationale for forbidding a blessing of such unions, noting that any union that involves sexual activity outside of marriage cannot be blessed because it is not in a state of grace, or “ordered to both receive and express the good that is pronounced and given by the blessing.”

And it added that blessing a same-sex union could give the impression of a sort of sacramental equivalence to marriage. “This would be erroneous and misleading,” the article said.

Esteban Paulon, president of the Argentine Federation of Lesbians, Gays, Bisexuals and Transsexuals, said the document was proof that for all of Francis’ words and gestures expressing outreach to gays, the institutional church wouldn’t change.

“Saying that homosexual practice —openly living sexuality— is a sin takes us back 200 years and promotes hate speech that unfortunately in Latin America and Europe is on the rise,” Paulon said. “That transforms into injuries and even deaths, or policies which promote discrimination.”

A similar note of exasperation was echoed in the Philippines, Asia’s largest Roman Catholic nation, where gay rights leader Danton Remoto said it simply wasn’t worth it to fight an old institution. “I keep on telling LGBTQIs to just have their civil unions done,” Remoto said. “We do not need any stress anymore from this church.”

Other critical commentators noted the Catholic Book of Blessings contains blessings that can be bestowed on everything from new homes and factories to animals, sporting events, seeds before planting and farm tools.

Juan Carlos Cruz, a Chilean survivor of sexual abuse who is gay and close to Francis, said the document was out of step with Francis’ pastoral approach and was tone deaf to the needs and rights of LGBT Catholics.

“If the Church and the CDF do not advance with the world… constantly rejecting and speaking negatively and not putting priorities where they should be, Catholics will continue to flee,” he warned.

In 2003, the same Vatican office issued a similar decree saying that the church’s respect for gay people “cannot lead in any way to approval of homosexual behavior or to legal recognition of homosexual unions.” 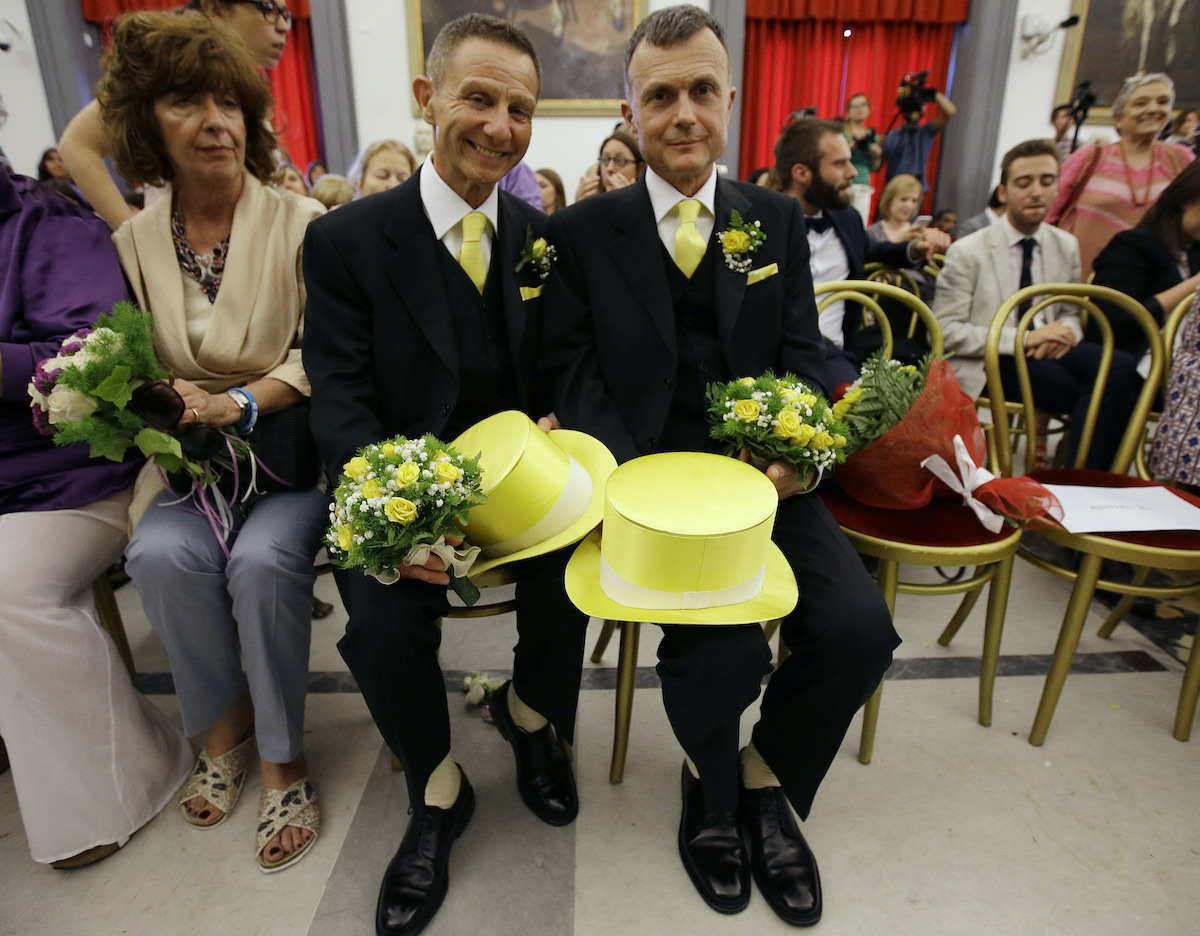 In this May 21, 2015 file photo, Angelo Albanesi, left, and Pier Giorgio De Simone wait for their civil union to be registered by a municipality officer during a ceremony in Rome’s Campidoglio Capitol Hill. (AP Photo/Gregorio Borgia, file)

Doing so, the Vatican reasoned then, would not only condone “deviant behavior,” but create an equivalence to marriage, which the church holds is an indissoluble union between man and woman.

Sister Simone Campbell, executive director of the U.S.-based NETWORK Lobby for Catholic Social Justice and an advocate for greater LGBTQ inclusion in the church, said she was relieved the Vatican statement wasn’t worse.

She said she interpreted the statement as saying, “You can bless the individuals (in a same-sex union), you just can’t bless the contract.”

“So it’s possible you could have a ritual where the individuals get blessed to be their committed selves.”