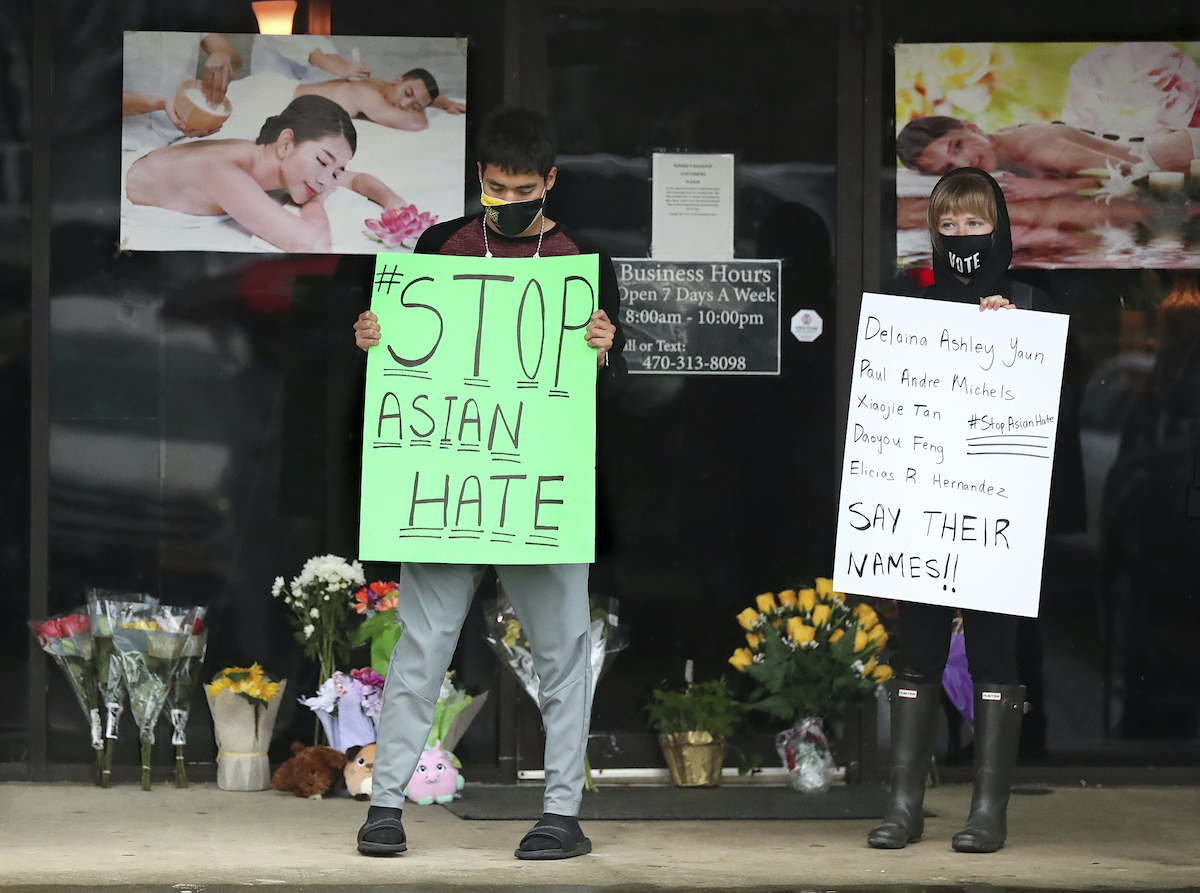 After dropping off flowers Jesús Estrella, left, and Shelby stand in support of the Asian and Hispanic community outside Young’s Asian Massage Wednesday, March 17, 2021, in Acworth, Ga. (Curtis Compton /Atlanta Journal-Constitution via AP)

Asian Americans were already worn down by a year of pandemic-fueled racist attacks when a white gunman was charged with killing eight people, most of them Asian women, at three Atlanta-area massage parlors.

Hundreds of Asian Americans and Pacific Islanders turned to social media to air their anger, sadness, fear and hopelessness. The hashtag #StopAsianHate was a top trending topic on Twitter hours after the shootings that happened Tuesday evening.

“I think the reason why people are feeling so hopeless is because Asian Americans have been ringing the bell on this issue for so long… We’ve been raising the red flag,” said Aisha Yaqoob Mahmood, executive director of the Atlanta-based Asian American Advocacy Fund, which does political and advocacy work across Georgia.

Many were also outraged that the suspect, 21-year-old Robert Aaron Long, was not immediately charged with hate crimes. Authorities said Long told police the attack was not racially motivated, and he claimed that he targeted the spas because of a “sex addiction.” Six of the seven slain women were identified as Asian.

Law enforcement needs “some training understanding what a hate crime is. This man identified targets owned by Asians,” said Margaret Huang, president and CEO of the Southern Poverty Law Center, which tracks hate groups. The gunman “was very clearly going after a targeted group of people.”

Being Asian American herself, Huang said the shootings felt personal. She is worried that not classifying the attack as a hate crime will “absolutely discourage others from coming forward and seeking help.”

She also cringed at the comments of a sheriff’s captain who said of the gunman, “It was a really bad day for him.”

The remark “appeared to be trying to explain and justify” the suspect’s actions. “Hopefully it was a misstatement,” Huang said. 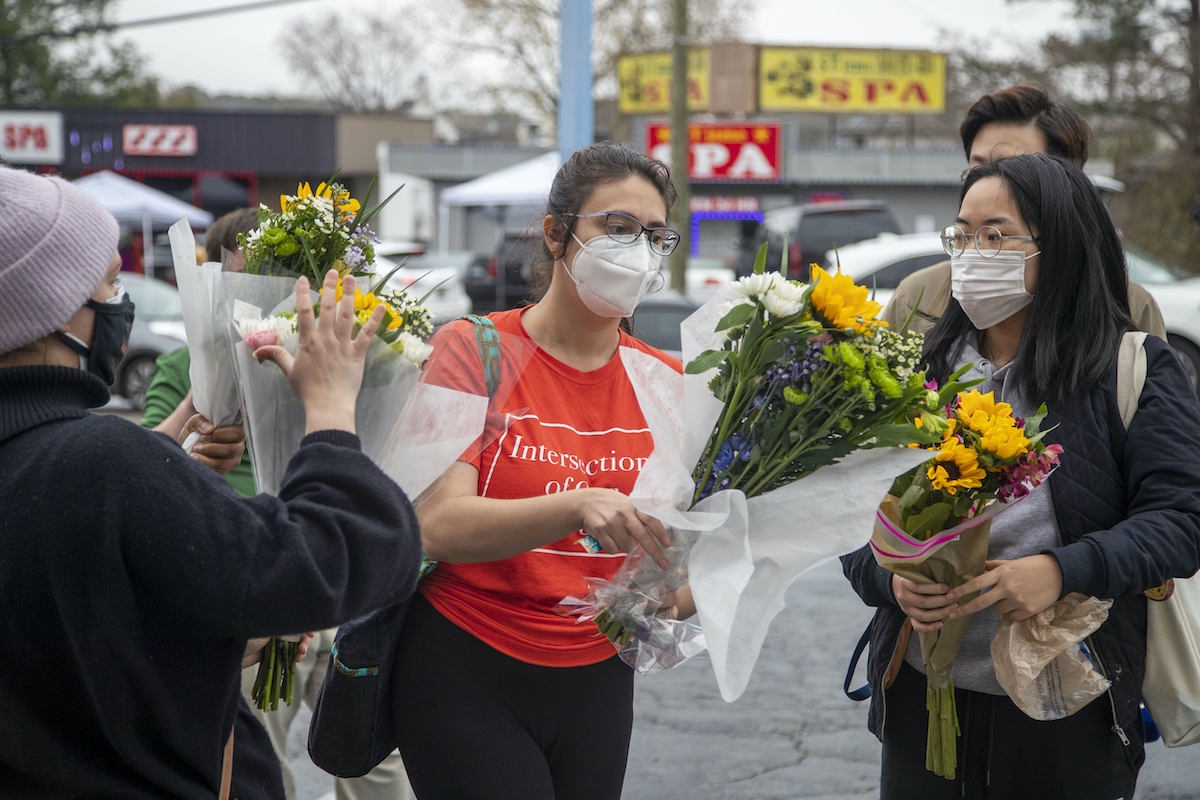 Roula AbiSamra, center, and Chelsey, right, prepare to lay flowers bouquets at a makeshift memorial outside of the Gold Spa in Atlanta, March 17, 2021. (Alyssa Pointer/Atlanta Journal-Constitution via AP, File)

Mahmood said Asian American business owners in the Atlanta area were already fearful because of incidents like graffiti and break-ins. The shootings will raise that worry to new heights.

“A lot of Asian American business owners in the beauty parlor industry and food service, these are often the most visible front-line faces in the community,” Mahmood said.

Her organization is partnering with other groups such as the Atlanta chapter of Asian Americans Advancing Justice to offer resources in multiple languages, including mental health assistance, self-defense training and bystander training.

“After the month and year we had, we knew our folks needed the time to come together safely just to grieve and heal and mourn and speak to what’s happening,” said Mohan Seshadri, Asian Pacific Islander Political Alliance co-executive director.

As much despair as Asian Americans feel, Seshadri said, the shootings also mark a flashpoint.

“Our folks are pissed off and ready to fight,” Seshadri said. “The way we get through this is together by organizing our people and feeling solidarity.”

Arizona Asian Chamber of Commerce CEO Vicente Reid is planning a vigil next week in the Phoenix suburb of Mesa, which has a high concentration of Asian American-owned shops and restaurants. He thinks the slayings have galvanized the local community to go beyond vigils.

“I think there is this whole outlet of this younger generation who’s passionate and has the energy. They just need someone to step up and lead them,” Reid said.

For the past several weeks, Asian Americans have questioned how to deal with a recent wave of assaults —many on the elderly— that have coincided with the pandemic. The virus was first identified in China, and former President Donald Trump and others have used racial terms to describe it. 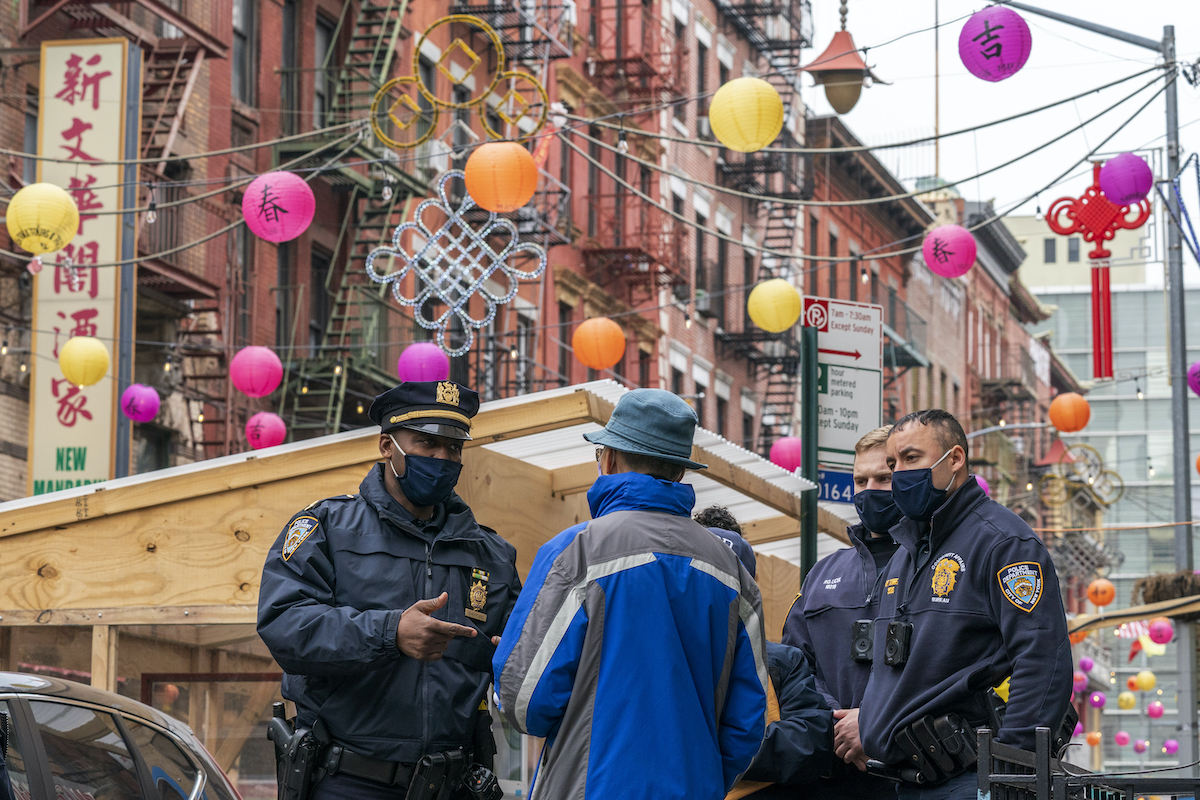 Following the release Wednesday of a report showing a surge in white supremacist propaganda in 2020, the Anti-Defamation League told The Associated Press that a significant amount of the propaganda included anti-immigrant rhetoric.

The anti-hate group said 10% of propaganda descriptions in its inventory contained negative references to immigration, multiculturalism or diversity. The 522 physical flyers, stickers or banners included the use of words such as “invasion, deport, disease, illegal, infection and virus,” the ADL said.

There were also seven propaganda incidents with direct anti-China references to COVID-19.

Meanwhile, Asian Americans are thankfully getting support from many non-Asian allies, Mahmood said.

“The path forward for us is really just standing together and making sure we don’t let these types of tragedies divide our communities.”

Tang reported from Phoenix and is a member of The Associated Press’ Race and Ethnicity team. Follow her on Twitter at @ttangAP.

One response to “Asian Americans Grieve, Organize in Wake of Atlanta Attacks”