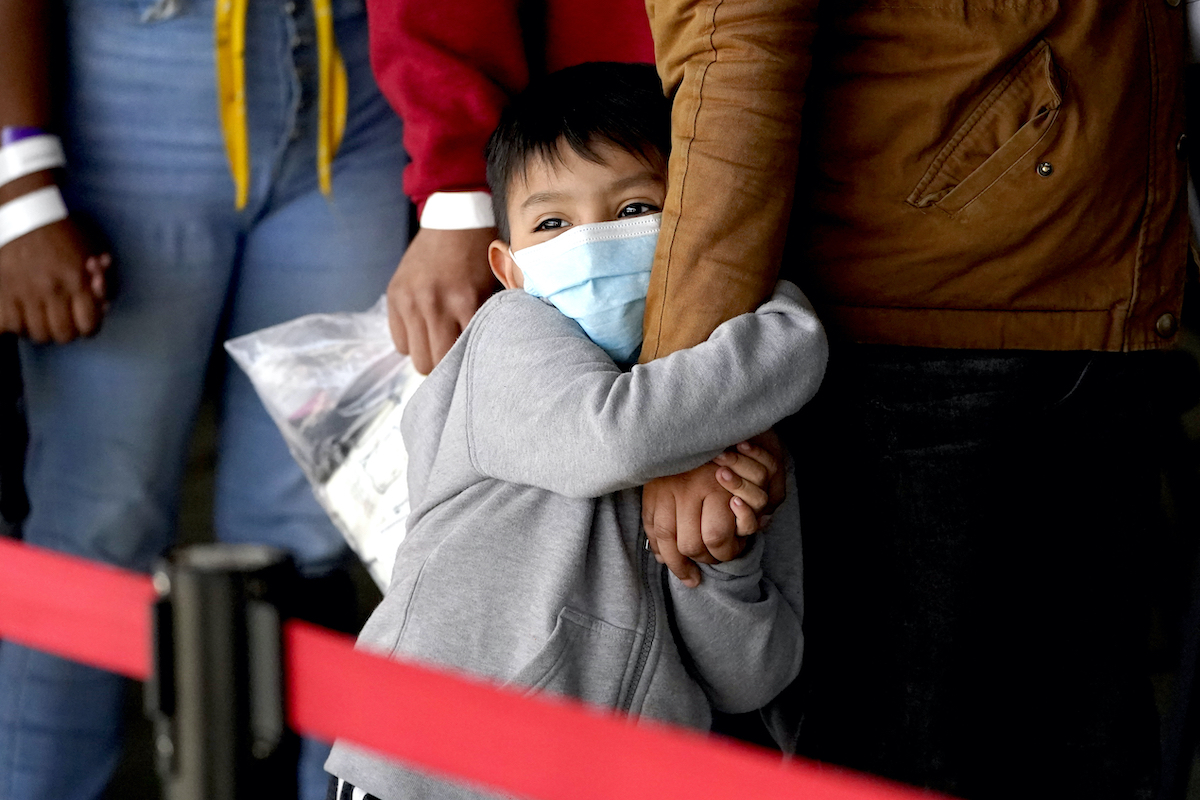 A migrant child holds onto a woman’s arm as they wait to be processed by a humanitarian group after being released from U.S. Customs and Border Protection custody at a bus station, Wednesday, March 17, 2021, in Brownsville, Texas. (AP Photo/Julio Cortez)

McALLEN, Texas (AP) — The U.S. government has stopped taking immigrant teenagers to a converted camp for oilfield workers in West Texas as it faces questions about the safety of emergency sites it is quickly standing up to hold children crossing the southern border.

The Associated Press has learned that the converted camp has faced multiple issues in the four days since the Biden administration opened it up amid a scramble to find space for immigrant children. More than 10% of the camp’s population has tested positive for COVID-19 and at least one child had to be hospitalized.

An official working at the Midland, Texas, site said most of the Red Cross volunteers staffing the site don’t speak Spanish, even though the teenagers they care for are overwhelmingly from Central America. When the facility opened, there weren’t enough new clothes to give to teenagers who had been wearing the same shirts and pants for several days, the official said. There were also no case managers on site to begin processing the minors’ release to family members elsewhere in the U.S.

Bringing in teenagers while still setting up basic services “was kind of like building a plane as it’s taking off,” said the official, who declined to be named due to government restrictions.

U.S. Health and Human Services notified local officials in Midland late Wednesday night that it had no plans to bring more teenagers to the site, according to an email seen by The Associated Press. There were still 485 youths on site as of Wednesday, 53 of whom had tested positive for COVID-19.

The government on Wednesday brought around 200 teenagers to another emergency site at the downtown Dallas convention center, which could expand up to 3,000 minors. HHS spokesman Mark Weber said taking more teenagers to Midland was on “pause for now.” HHS will also not open an influx facility for children at Moffett Federal Airfield near San Francisco, according to Democratic Rep. Anna Eshoo.

President Joe Biden’s administration has been sharply criticized for its response to an increase in crossings of unaccompanied immigrant children. As roughly 4,500 children wait in Border Patrol facilities unequipped for long-term detention, with some sleeping on floors, Health and Human Services has rushed to open holding sites across the country and tried to expedite its processes for releasing children in custody. About 9,500 minors are in HHS custody.

In addition, the U.S. has seen a sharp increase in Central American families arriving at the border who are fleeing violence, poverty and the effects of a destructive hurricane. Biden has kept intact an emergency measure enacted by the Trump administration during the pandemic that allows the government to quickly expel them to Mexico, though families with young children are generally allowed to enter through South Texas. 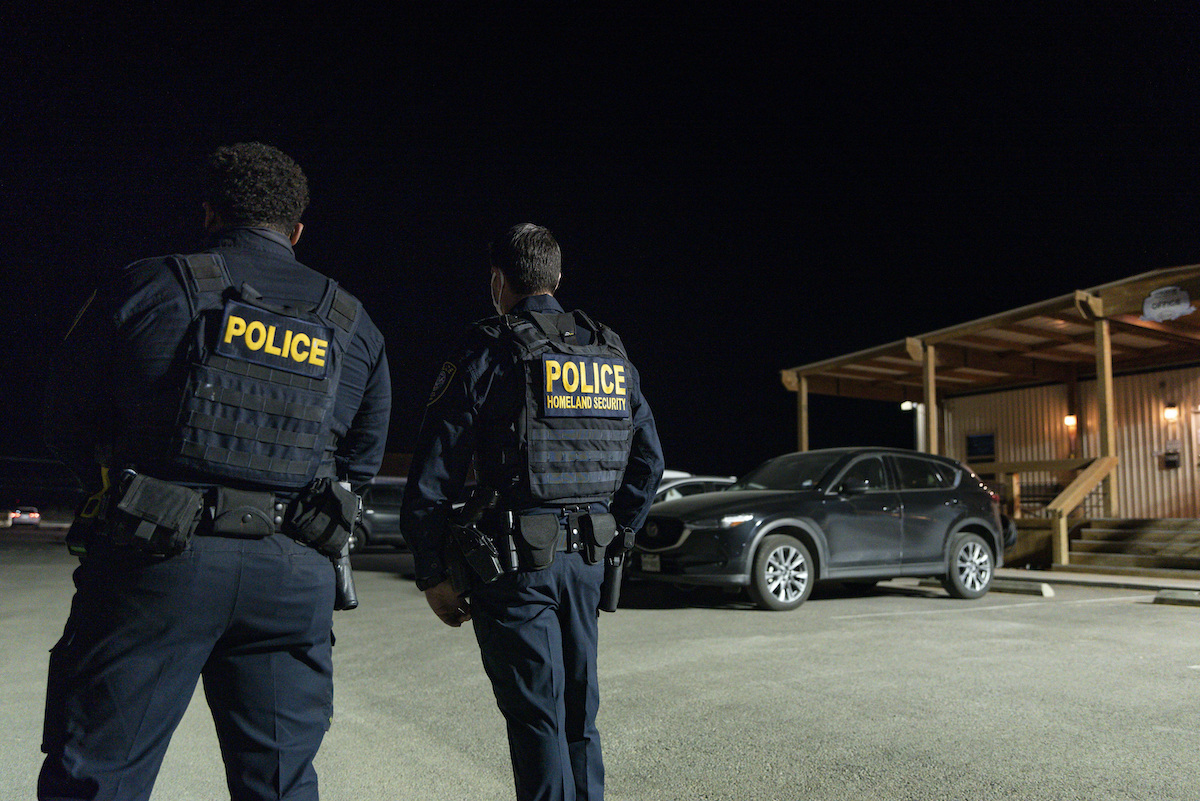 Department of Homeland Security officers wait for the arrival of migrant children and teenagers from the southern border of the United States at the site of a temporary holding facility that opened Sunday, March 14, 2021 south of Midland, Texas. (Odessa American/Eli Hartman)

María Cuellar, 38, of San Pedro Sula, Honduras, was expelled this week along with her 10-year-old boy. Cuellar said she had heard the U.S. was again admitting migrants with the changing administration. She said her house was ravaged by Hurricane Eta in November and she was not making ends meet as the pandemic slowed the economy.

Smugglers took her through Mexico and to the Rio Grande River with a group of 10 after sunset on Sunday. The group then walked overnight for three hours to turn themselves over to Border Patrol agents, but they were returned through the pedestrian bridge that connects McAllen, Texas, to Reynosa, Mexico, in a matter of hours.

Cuellar sobbed as she described being away from her 11-year-old daughter.

“I feel desperate because I don’t know what we are going to do,” she said. “I feel like I have to wait and try again.”

The Biden administration is not expelling immigrant children unaccompanied by a parent or legal guardian. Several hundred a day are crossing the border, going first to often packed Border Patrol stations while they await placement in the HHS system.

HHS has turned to the American Red Cross to care for teenagers in both Midland and Dallas, a departure from the standard practice of having paid, trained staff watch over youths. Red Cross volunteers sit outside portable trailers in Midland to monitor the teenagers staying inside. Staff from HHS and the U.S. Public Health Service are also at both sites.

Neither HHS nor the Red Cross would say whether the volunteers had to pass FBI fingerprint checks, which are more exhaustive than a commercial background check. Both agencies have declined repeated requests for interviews.

The waiver of those background checks at another HHS camp in Tornillo, Texas, in 2018 led to concerns that the government was endangering child welfare. HHS requires caregivers in its permanent facilities to pass an FBI fingerprint check, and the agency’s inspector general found in 2018 that waiving background checks combined with not having enough mental health clinicians were “serious safety and health vulnerabilities.”

The official who spoke to the AP on condition of anonymity said there was not sufficient mental health care at the Midland camp for minors who typically have fled their countries of origin and undergone a traumatic journey into the country.

In a statement earlier this week, HHS said it was rushing to get children out of Border Patrol custody and that emergency sites “will provide a safer and less over-crowded environment where children are cared for and processed as quickly as possible.”

The Red Cross says its volunteers in Midland and Dallas “have received intensive training in sheltering operations and COVID-19 safety,” and that they had all undergone background checks. The agency declined to say how many hours of training each volunteer had received.

U.S. Rep. August Pfluger, a Republican who represents Midland, was allowed to visit the site soon after it opened and saw the portable units that serve as rooms for each teenager. “It’s a professional facility that was intended for workers,” he said. 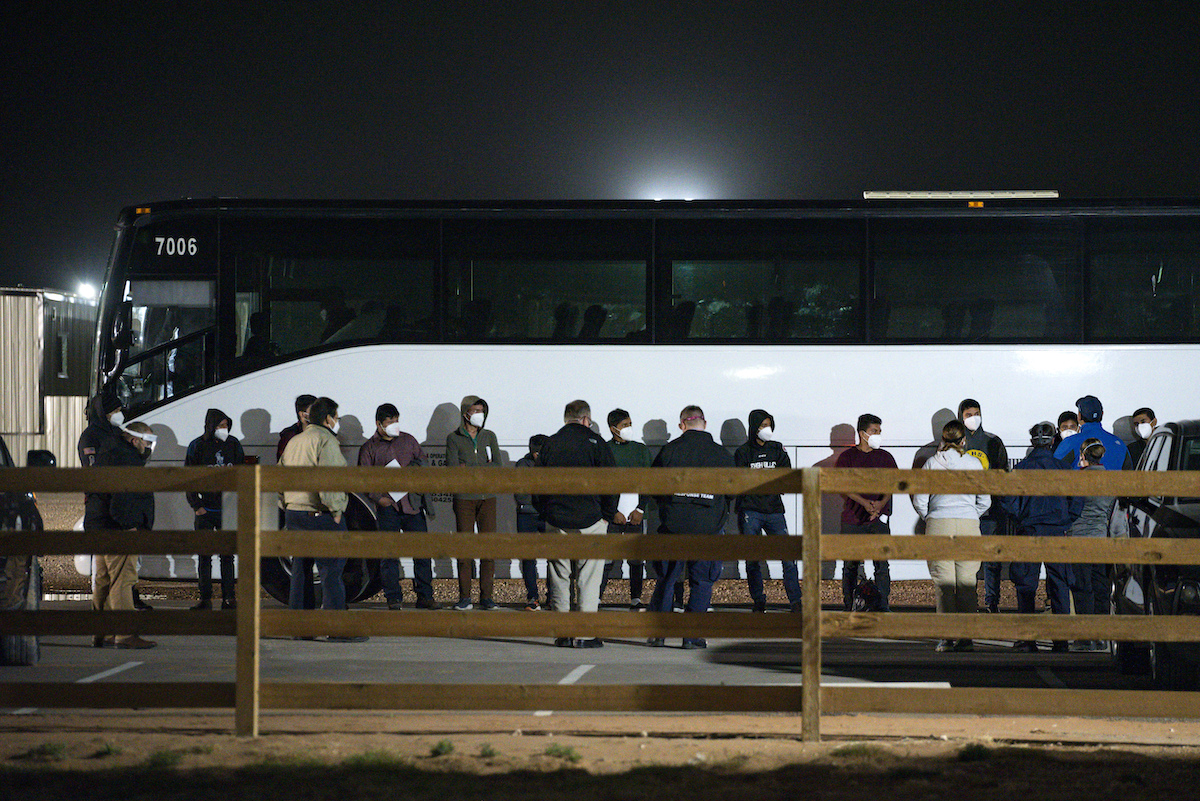 Migrant children and teenagers from the southern border of the United State are processed after entering the site of a temporary holding facility Sunday, March 14, 2021 south of Midland, Texas. (Odessa American/Eli Hartman)

But Pfluger and other Midland officials said the Biden administration wasn’t answering their questions or giving them assurance that officials would keep the surrounding community safe. HHS opened the Midland site without notifying some top local officials who say many of their questions aren’t being answered.

The email HHS sent to local officials this week details the haste with which government officials opened the site. It says officials identified the man camp on Friday and signed a contract Saturday. The first group of teenagers arrived Sunday night.

“People don’t trust what they’re doing. They don’t feel secure,” Pfluger said. “The lack of transparency only serves to magnify that problem.”

Leecia Welch, an attorney for the National Center for Youth Law, interviewed children last week who were detained at the Border Patrol’s sprawling tent facility in Donna, Texas. Many of those children reported going days without a shower or being taken outside.

Welch noted that Biden “inherited a dismantled immigration system and the impact on children, in particular, is becoming increasingly dire.”

But, she added, “building more and more holding centers without services or case management is just trading one set of problems for another.”

Editor’s Note: Latino Rebels will no longer use the word “surge” in news articles that describe migrants, no matter the outlet we publish on our site. We have removed that word once in this story and replaced it with “increase.”