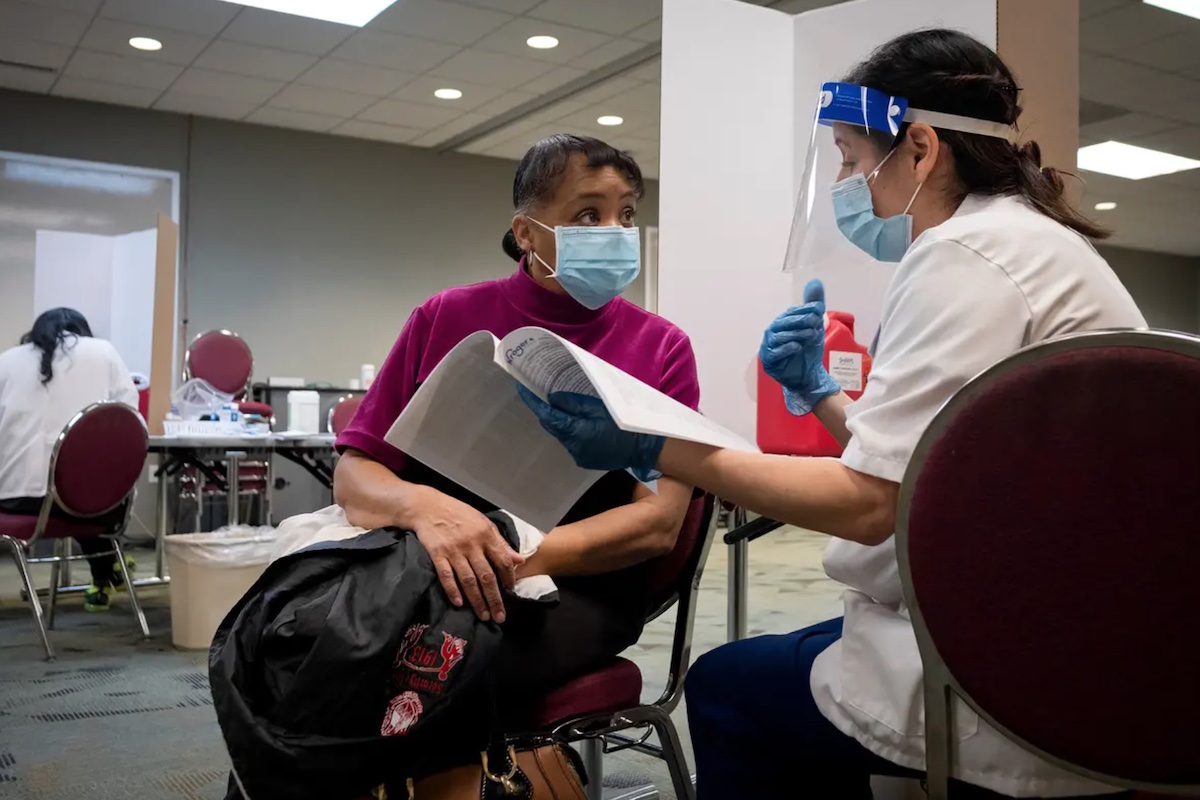 Beverly Mills, a teacher at Anderson Elementary School, speaks to pharmacist Ilana Druker before getting vaccinated at the Houston Independent School District’s Hattie Mae White Educational Support Center on Jan. 9, 2020. Black Texans make up 13% of the state population but just 6% of those vaccinated as of March 18. (Credit: May-Ying Lam for The Texas Tribune)

The Texas Tribune is a nonprofit, nonpartisan media organization that informs Texans —and engages with them— about public policy, politics, government and statewide issues. This story was originally published by The Texas Tribune here.

By Marissa Martinez and Sami Sparber

Black and Hispanic Texans, who have already been disproportionately killed and hospitalized after being infected with COVID-19, appear to be vastly underrepresented among those getting shots across the state, according to state health data that still paints an incomplete picture.

The state health department’s limited demographic data has clouded the picture of the disparities statewide—more than one-sixth of the records don’t include recipients’ race or ethnicity.

The Texas Department of State Health Services recently expanded vaccine access to Texans age 50 and older and now requires providers to report racial demographic information, but local health officials and experts still say the people being vaccinated in Texas do not reflect the state’s demographics.

White Texans are being vaccinated at nearly twice the rate of Hispanic Texans and more than six times the rate of Black Texans, according to state data.

Among the more than 5.86 million Texans vaccinated with at least one dose as of March 18, just under 41% of the recipients have been white, which is roughly in line with their proportion of the state population.

The only racial or ethnic group being vaccinated at a higher rate than its population share is Asian Texans, who make up about 5% of the state’s population and roughly 6% of those vaccinated. The “other” category, which accounts for about 8% of those vaccinated, includes other races and those who identify as multiracial, according to the Texas Department of State Health Services website.

Texans whose race or ethnicity is unknown account for just over 17% of people vaccinated.

DSHS has collected and published race and ethnicity data since late January, more than a month into the nation’s vaccination process. To better track which groups are being vaccinated —and encourage providers to enter race and ethnicity information— officials said they would start requiring it and making it easier for users to report.

“We are getting much more complete race/ethnicity data now,” DSHS spokesperson Chris Van Deusen said in a statement, adding that the demographics of those who have received first doses administered since February 4 are “much closer to the state’s 16 and older population breakdown… than we were able to see early on when we didn’t know the race or ethnicity of such a large percentage of people.”

The progress has been too slow for some elected officials.

“I feel kind of that you broke my heart and broke your promise to me,” Miles told Imelda Garcia, DSHS associate commissioner for laboratory and infectious disease services and chair of the Expert Vaccine Allocation Panel, which makes recommendations for vaccine allocation strategies to the Texas Commissioner of Health.

Garcia acknowledged the state can “do better” to improve equity, but said local officials are responsible for the majority of vaccine distribution.

“At the end of the day, we can put vaccines in certain places, but it’s the locals that know their communities best,” Garcia told lawmakers during the hearing. “All we can do is give the vaccine. Where they put it, where they choose to move it, who they choose to vaccinate… is on them.”

In January, advocates for communities of color worried they would have more trouble accessing vaccines than white Texans, given that the state’s distribution centers are more common in white, affluent neighborhoods.

A February University of Pittsburgh and West Health Policy Center study showed that Texas had one of the highest concentrations of counties in which Black residents were more likely than white residents to have a driving distance of more than 10 miles to a vaccine hub. Other analyses showed similar geographic disparities across the state, because vaccine providers like hospitals and pharmacies tend to be located in predominantly white, wealthy areas.

Several Texas counties have since employed measures to combat some of the obstacles communities of color face in getting vaccinated. To reach Black, Hispanic and low-income populations, many cities turned to existing public health clinics, community centers and other local institutions to sign up and vaccinate more people.

In Dallas, where more than half of the first doses went to residents who lived in whiter and wealthier zip codes, city leaders in January tried to address inequities by prioritizing specific zip codes with vulnerable populations above others.

But Texas officials forced them to walk back their plan or have their vaccine allocation slashed.

“While we ask hub providers to ensure vaccine reaches the hardest-hit areas and populations, solely vaccinating people who live in those areas is not in line with the agreement to be a hub provider,” Garcia, the DSHS associate commissioner, told Dallas health officials in a letter obtained by The Texas Tribune.

Many Texas counties and cities are still focusing on zip codes that are considered at risk under the Social Vulnerability Index—a set of criteria set by the Centers for Disease control that includes social factors like minority status, language and housing and transportation availability.

In El Paso, where the percentage of “unknown” demographics for vaccine recipients has dropped from nearly 90% in February to just over 35%, officials recently created a new dashboard that tracks zip code, race and other demographic information about vaccine recipients. The county’s data show that 49% of those vaccinated are Hispanic, who make up 83% of the county’s population.

In the initial months of the state’s vaccination effort, inequalities could likely be attributed to the fact that the first phase concentrated mostly on health care workers and people 65 and older, said Jamboor Vishwanatha, director of the Texas Center for Health Disparities at the University of North Texas Health Science Center.

Nationally, white people have longer lifespans on average than Black and Hispanic people, and when vaccines were prioritized for older age groups, many people of color were subsequently left out.

“Younger generations tend to have a higher percentage of people of color, so it’s reasonable to think that as more younger people are vaccinated, that percentage will continue to shift,” said Van Deusen, the DSHS spokesperson.

On top of this, technology, transportation, language and occupational barriers have prevented many people of color from accessing doses.

Vishwanatha said although some of the disparities in vaccinating people of color were initially attributed to vaccine hesitancy, recent data shows acceptance rates are largely the same among white, Black and Hispanic people. He said the early reports gave “the wrong notion” about the source of the disparities.

“Right now, it’s more about availability of the vaccine and access to the vaccine, particularly for people who either are homebound or have mobility issues or… are unable to take time off,” Vishwanatha said. “Right now, it’s all about how the distribution goes. As long as that evens out, [they’ll be] in a better place.”

There will be a focus on minority communities as the state expands its public awareness campaign when more vaccine becomes available next month, Van Deusen said.

In early February, three FEMA vaccination hubs were established in Dallas, Arlington and Houston to specifically target underserved communities, like those who live in zip codes considered to be at risk based on their Social Vulnerability Index.

Vishwanatha said beyond super sites, adding more vaccine providers in vulnerable areas will help bring down disparities. Though President Joe Biden’s administration has worked with pharmacies to expand their vaccine programs, he said those companies often do not have locations in areas with a high proportion of people of color.

“A lot of vaccine distribution is at these large sites, other health care institutions and hospitals,” Vishwanatha said. “We move forward if we get community organizations, religious entities, houses of worship, schools, community centers — we can distribute vaccine there, which is much easier for communities to go to.”

Disclosure: University of North Texas has been a financial supporter of The Texas Tribune, a nonprofit, nonpartisan news organization that is funded in part by donations from members, foundations and corporate sponsors. Financial supporters play no role in the Tribune’s journalism. Find a complete list of them here.