US Businesses Near Border Struggle With Boundaries’ Closure 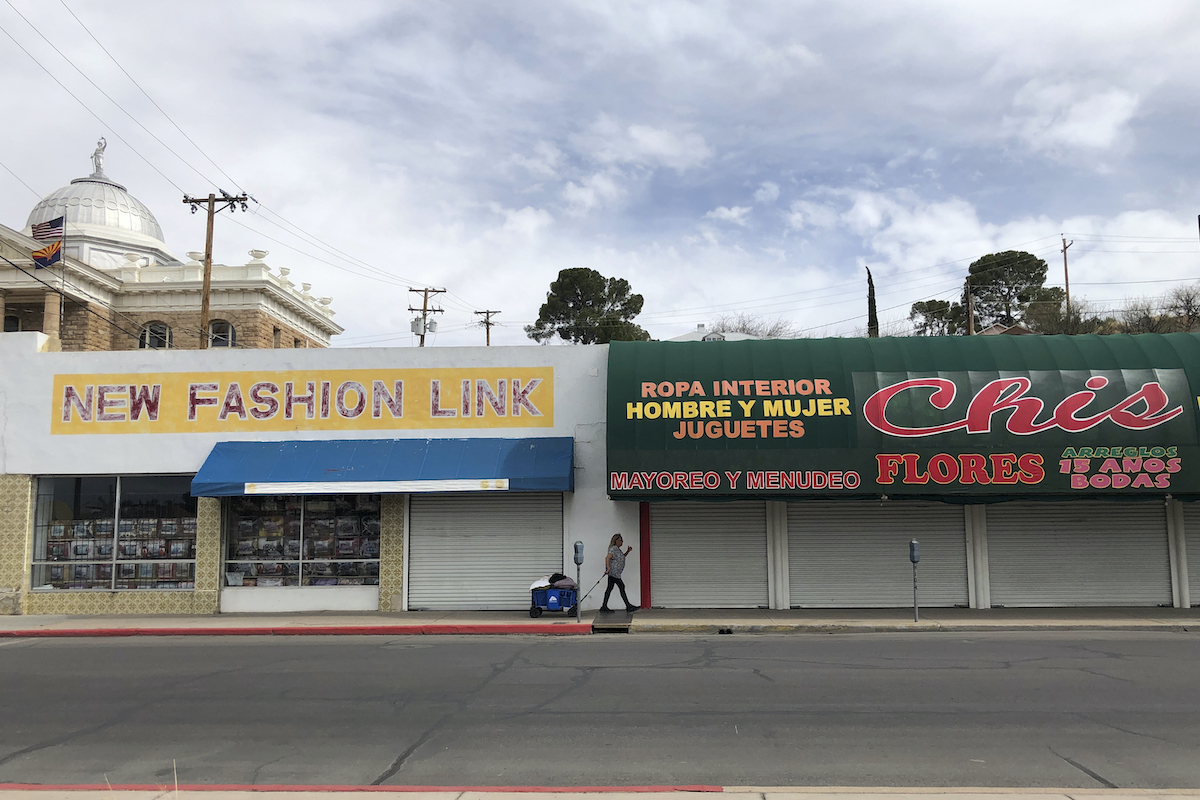 A woman walks past two out-of-business clothing stores located steps away from the U.S.-Mexico border on March 15, 2021 in Nogales, Ariz. (AP Photo/Suman Naishadham)

NOGALES, Ariz. (AP) — Evan Kory started calling brides in Mexico’s northern Sonora state last March, asking if they wanted to get their wedding gowns from his Arizona store just before the U.S. closed its borders with Mexico and Canada because of the coronavirus.

His namesake shop in the border town of Nogales was popular among brides-to-be in northern Sonora for its large, affordable inventory, said Kory, the third-generation proprietor. Located steps from the border fence, Kory’s has been in business for half a century but has been closed for a year because of the pandemic, with its main customer base —Mexican day-trippers— largely unable to come to the U.S. and shop.

Some 1,600 miles (2,575 kilometers) north, Roxie Pelton in the border town of Oroville, Washington, has been in a similar pinch. Business at her shipping and receiving store is down 82% from a year ago because most of the Canadians who typically send their online orders to her shop haven’t been able to drive across the border.

“I’ve gotten by this far, and I’m just praying that I can hold until the border opens up,” Pelton said last month.

In border towns across the U.S., small businesses are reeling from the economic fallout of the partial closure of North America’s international boundaries. Restrictions on nonessential travel were put in place a year ago to curb the spread of the virus and have been extended almost every month since, with exceptions for trade, trucking and critical supply chains.

Small businesses, residents and local chambers of commerce say the financial toll has been steep, as have the disruptions to life in communities where it’s common to shop, work and sleep in two different countries.

“Border communities are those that rely —economically, socially, and yes, health wise— on the daily and essential travel of tourist visa holders,” the presidents of 10 chambers of commerce in Arizona, Texas and California border cities wrote in a letter last month to the Homeland Security and Transportation departments. It asked the government to allow visitors with U.S. tourist visas to cross into their states.

As more Americans are vaccinated against COVID-19 and infection rates fall, many hope the restrictions will soon be eased. 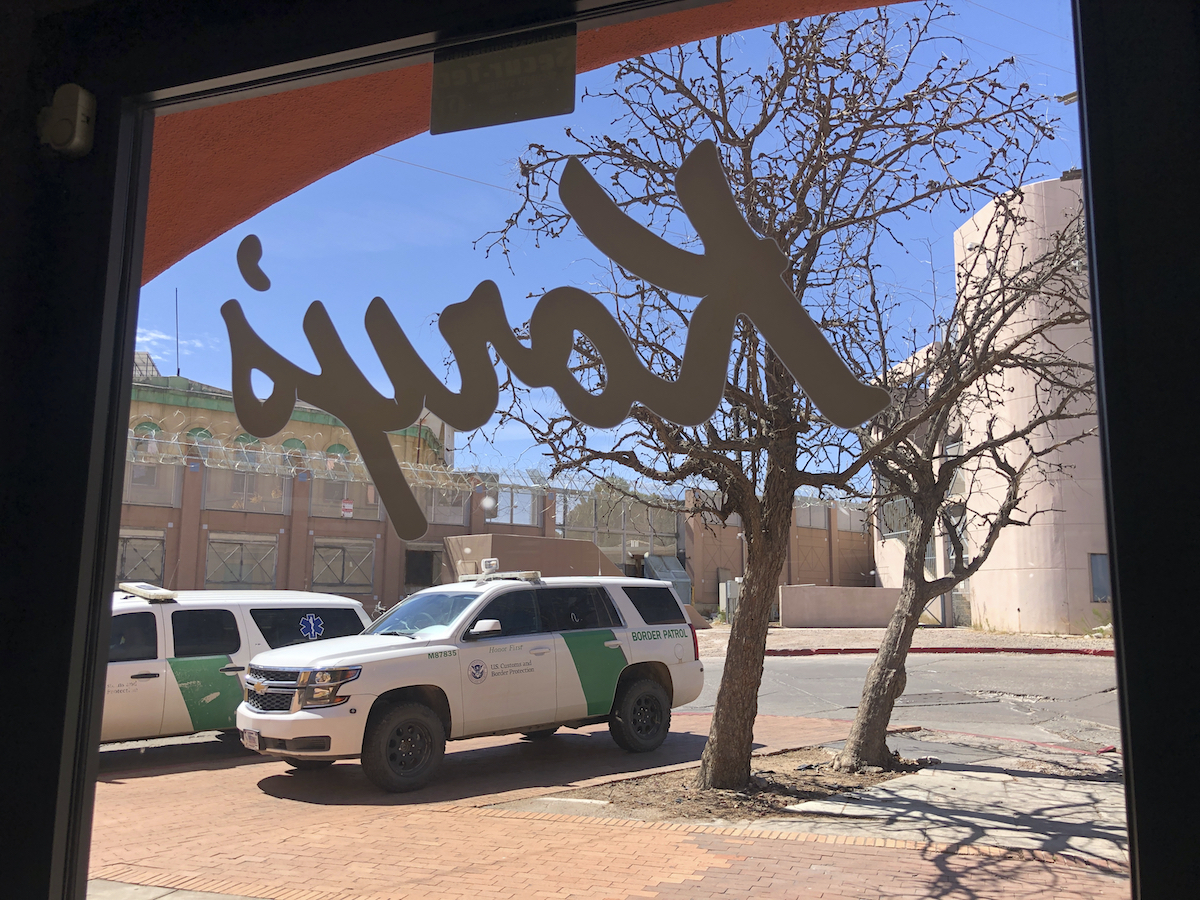 Two Border Patrol trucks are parked outside a clothing store located steps away from the U.S.-Mexico border on March 15, 2021, in Nogales, Ariz. (AP Photo/Suman Naishadham)

U.S. Sen. Susan Collins, a Republican from Maine, asked the Biden administration last month to reconsider U.S.-Canada border restrictions, arguing “common-sense exceptions” like family visits or daily commerce should be made for border towns where infection rates were low.

However, the Department of Homeland Security announced that the U.S., Mexico and Canada agreed to extend border restrictions on nonessential travel through April 21.

Visitors from Mexico contribute an estimated 60% to 70% of sales tax revenue in Arizona border communities, according to the Arizona-Mexico Commission, which promotes trade and tourism.

In Texas, border cities have faced higher unemployment rates during the pandemic than the state average, though in some places, that had already been the case.

Jesús Cañas, a business economist at the Federal Reserve Bank of Dallas, said Texas border economies appear to have fared better than many predicted a year ago. In border cities like Brownsville, Laredo and El Paso, January’s non-seasonally adjusted unemployment rates of 9.5%, 8.9% and 7.4%, respectively, were close enough to the state’s rate of 7.3% to suggest the restrictions have had less impact on larger, more diversified border economies than elsewhere.

“What I have seen over the years is that the border adjusts to these shocks in a very peculiar way,” Cañas said.

In Nogales, the economic wear from nearly 12 months of a partially shut border is easy to spot in the historic downtown.

Bargain clothing stores, money exchanges, secondhand shops and retailers selling plastic knickknacks within walking distance of the border were closed. Many storefronts were boarded up.

​Olivia Ainza-Kramer, president of the Nogales Chamber of Commerce, said the loss in revenue from the drop in Mexican shoppers over the past year has been felt most acutely by businesses closest to the border that tend to be family-owned and cater to pedestrian shoppers.

Further north, big-box retailers and other stores have fared a little better because they’re visited by residents of the town of 20,000, she said. 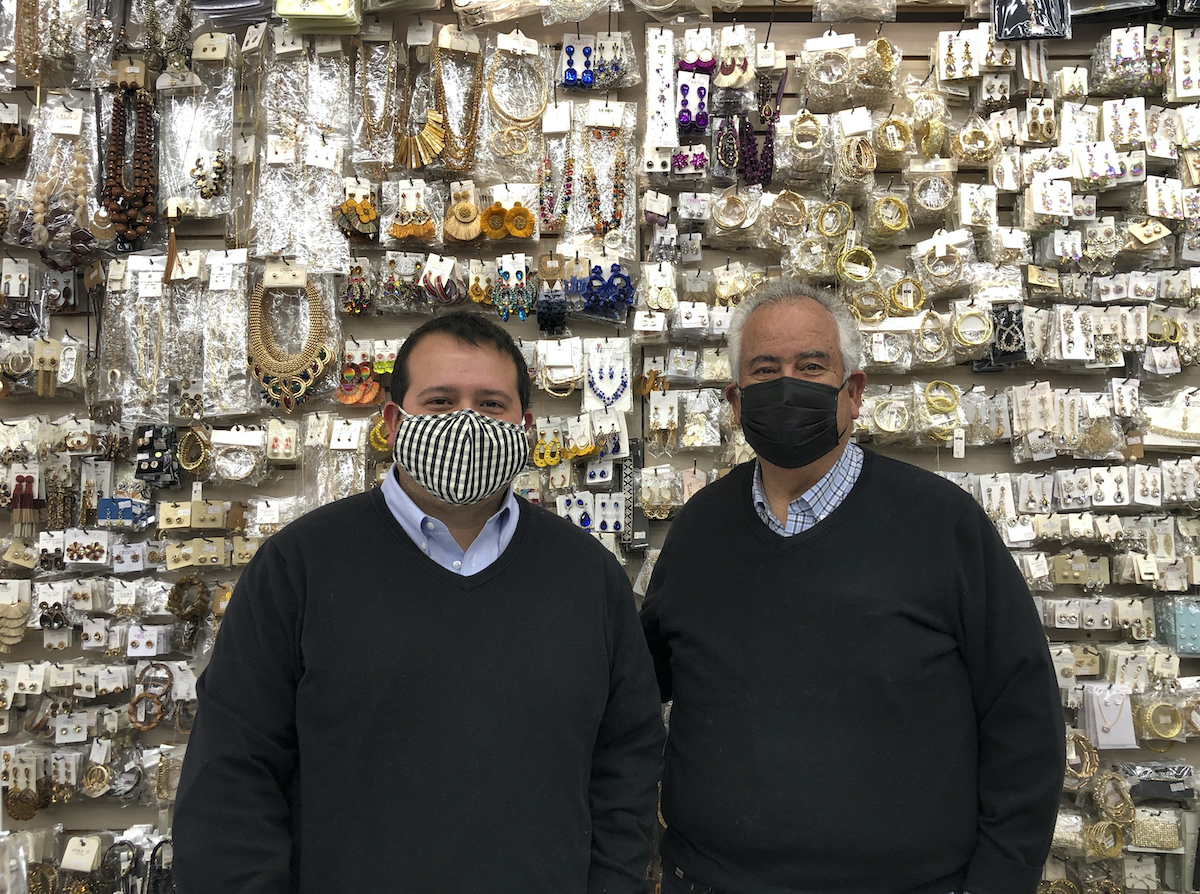 Business owner Greg Kory and his father stand in front of a wall of jewelry at their downtown Nogales, Arizona, store on March 15, 2021. (AP Photo/Suman Naishadham)

Kory, who owns the bridal shop, saw the contrast up close. His family has three clothing stores in Nogales. Two are steps from the U.S.-Mexico port of entry —and both closed— while a third is about 4 miles (6 kilometers) from the border.

Kory said his family has managed to keep the third store open, albeit sales are down 75% to 80% from pre-pandemic levels. Most of the customers are Nogales locals, he said.

“We’ve seen the evolution at the international border, you know, from the ’40s… in my family,” he said. “This is the first time that we’ve had a closure.”

Kory said the business has kept just four of its usual 27 employees. But based on conversations with customers in Mexico, he’s confident that once restrictions are lifted, sales will be strong enough to rehire all those workers.

“That is the plan,” Kory said, “but we can’t do it until our customers are allowed to cross.”