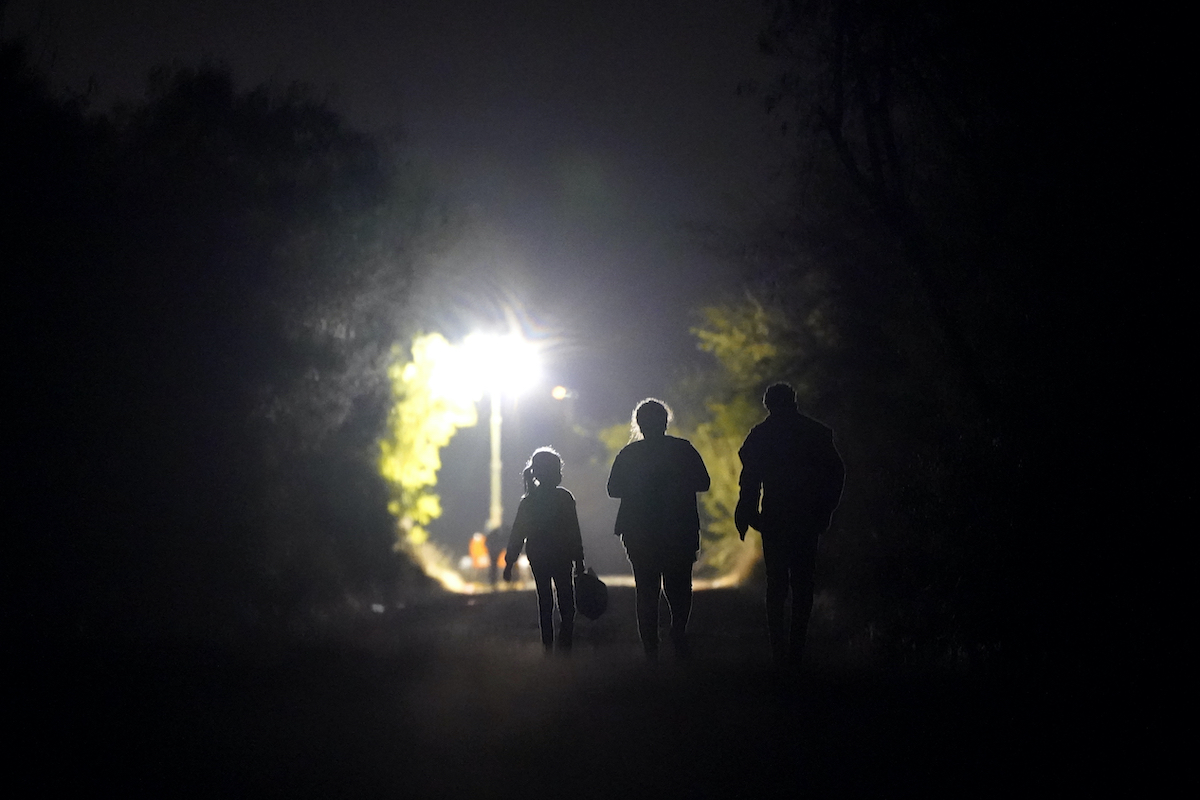 A 7-year-old migrant girl from Honduras, left, walks with Fernanda Solis, 25, center, also of Honduras, and an unidentified man as they approach a U.S. Customs and Border Protection processing center to turn themselves in while seeking asylum moments after crossing the U.S.-Mexico border, Sunday, March 21, 2021, in Mission, Texas. (AP Photo/Julio Cortez)

MISSION, Texas (AP) — The Honduran girl, 7 years old and surrounded by strangers in the pre-dawn darkness, was determined to keep pace with the other migrants headed for the U.S. border.

Her father, she told an Associated Press journalist, had traveled with her by bus for 22 days across Mexico. Then, he went back to their homeland—but not before he placed her in the hands of a young man who was to help her cross the river into Texas.

“He just said to go on my own and take care of myself,” she said.

What happened to the man who was to be her guide is unclear, but the pony-tailed girl met up with a group and pressed on, vigorously swinging her arms to keep up as they trekked north through the Rio Grande Valley on Sunday under a half-moon. Temperatures had dipped into the mid-50s; the girl wore a yellow jacket decorated with cartoonish drawings of trains, and a black mask to protect her from COVID-19.

The AP is not using the girl’s name. It does not normally name children without permission from their parents, and the identity of her father could not be obtained.

But her journey illustrates the extraordinary risks taken by migrant parents to get their children across the border, even if it means abandoning them for the most perilous part of the trip.

These desperate decisions represent a dilemma for the fledgling administration of President Joe Biden as it attempts to restore an orderly asylum system: In trying to adopt a more humane approach to protect minors traveling alone, more children may be put at risk.

Nearly 9,500 migrant children arrived at the border in February, up 60% from a month earlier. The government is rushing to set up more facilities to house them and speeding up the process to place them with relatives in the U.S. The city and county of San Diego said Monday that its downtown convention center would host migrant children for an average of 30 to 35 days.

Single adults are almost always expelled, while families are sometimes expelled and sometimes allowed to remain in the United States to pursue asylum.

The girl did reach the United States. A fellow Honduran migrant, 25-year-old Fernanda Solis, said she found her crying alone on a dirt path north of the Rio Grande after midnight, as a helicopter hovered overhead and border agents addressed migrants through a loudspeaker. 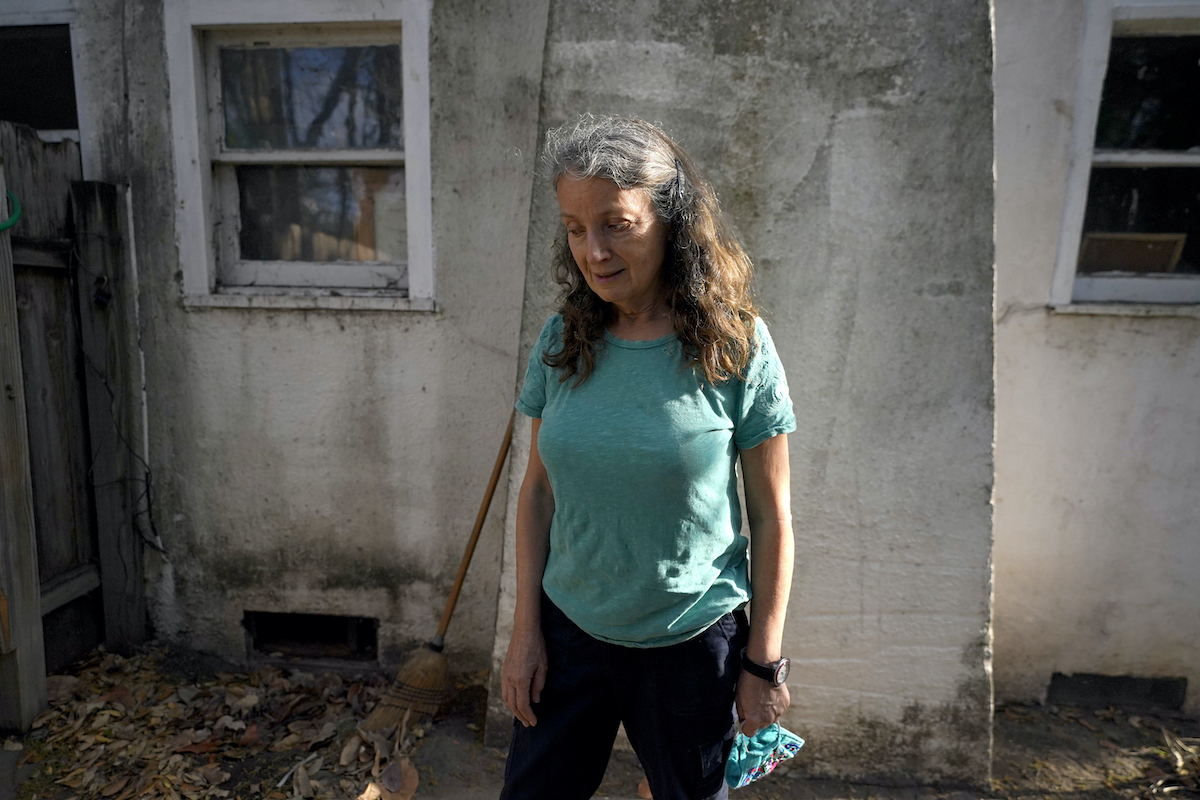 Jennifer Harbury, a Texas-based human rights advocate, speaks to The Associated Press about the dangers Central America migrants face when they are deported to Mexico and left in violent border towns, Sunday, March 21, 2021, in Brownsville, Texas. (AP Photo/Julio Cortez)

Solis tried to comfort the girl, who was cold, hungry and thirsty. She told her they could walk together to turn themselves over to Border Patrol agents and seek asylum.

The girl gained confidence as she walked a route commonly used by Central American migrants. She answered questions unhesitatingly: She turns 8 next month. She should be going into third grade, though she did not complete second because of the pandemic.

She pressed ahead to a country where she knows no one but a family member in South Carolina.

“That’s how she acts. She is brave,” Solis said.

The girl said her father had no more money to cross the border with her.

Solis said she was able to gather that the girl’s father had recently tried to cross with her, but they were both quickly expelled back to Reynosa, Mexico, under pandemic-related powers the Trump administration invoked. Biden has kept the powers —known as Title 42 for the section of an obscure public health law— in place.

“The girl told me they had tried to cross together, but they were returned. This time, he just sent the girl for her to turn herself in,” Solis said.

A federal judge halted expulsions of unaccompanied children in November after the Trump administration had turned back at least 8,800. But an appeals court panel of three Trump-appointed judges ruled in January that they could resume. Biden, in a break with Trump, decided to release children to relatives with notices to appear in immigration courts.

The Honduran girl turned herself over to Customs and Border Protection; the agency did not respond to a request for information about her whereabouts.

Her story is being repeated again and again along the border. On Sunday, a Salvadoran man approached a journalist to ask whether his 13-year-old daughter would qualify to stay if she crossed on her own.

“The parents are saying ‘We are not going to make it. We have to be very realistic here, but if I send my child up to the bridge, and they cross alone, they’ll have to take them in,’” said Jennifer Harbury, a Texas-based human rights advocate.