Hispanic Texans Are Still Underrepresented in the Vaccination Process. Here’s How Dallas Is Trying to Change That. 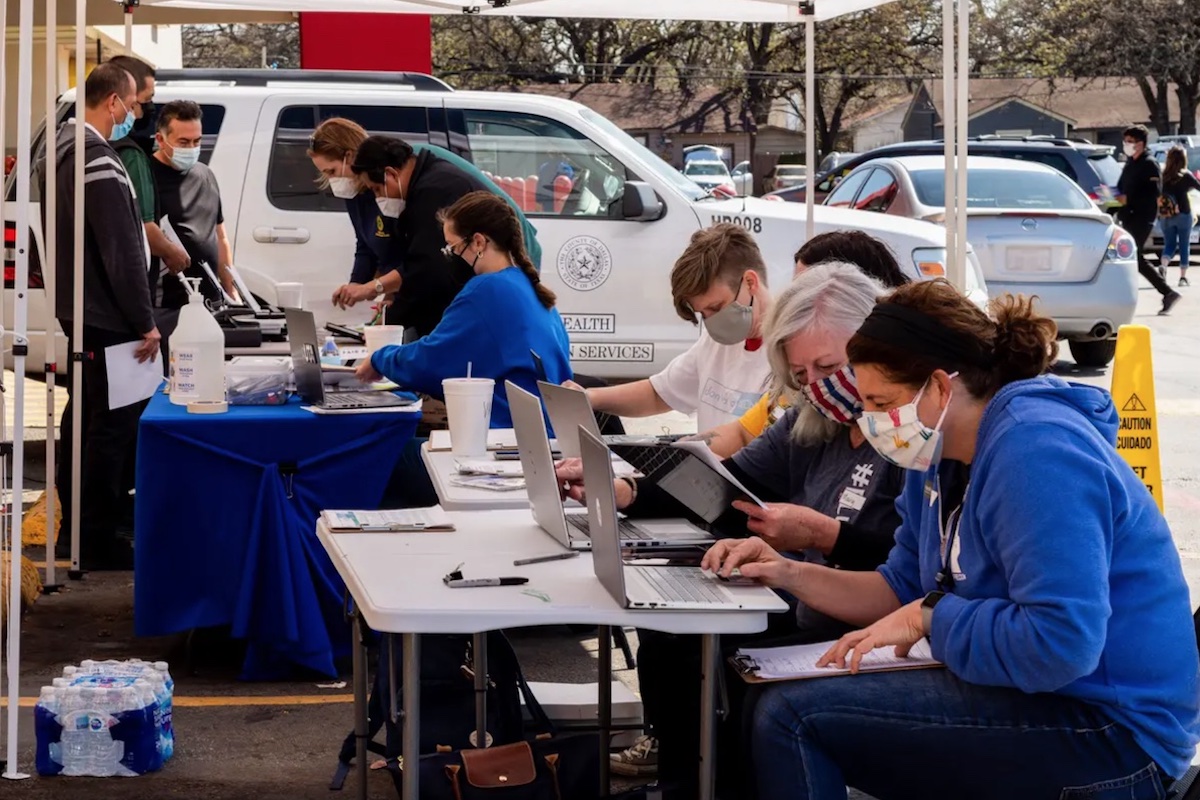 Volunteers and officials with the Dallas County Department of Health and Human Services register people for the COVID-19 vaccine at an event in Irving on March 19, 2021. While the volunteers and professionals are organizing registration events almost daily to get more Hispanic and Black people vaccinated, they are concerned that their efforts won’t be enough. (Credit: Carly May for The Texas Tribune)

The Texas Tribune is a nonprofit, nonpartisan media organization that informs Texans —and engages with them— about public policy, politics, government and statewide issues.

DALLAS — It wasn’t that she didn’t try to get the vaccine. María Gilberta Reyna had attempted to register through a Dallas hospital’s online application, but she never managed to make it work.

“I would put my information but the site would throw me back to the initial page,” Reyna, who is a Mexican immigrant, said in Spanish.

But on Friday, she got lucky. After parking her car in a Savers Cost Plus in Irving, she saw a group of people with notepads, registering customers for vaccinations outside the store.

“I was just coming to the grocery store to buy food, and I came to see what was happening,” said Reyna, who works for a packaging company.

On Monday afternoon, after a two-hour wait in the county-run Fair Park vaccination center, the 58-year-old got her first dose.

The group of people that signed her up included grassroots organizers and county employees who have been working to bridge the vaccination gap among communities of color in Dallas, a problem that Texas is still experiencing statewide months after the vaccination process started. And while the volunteers and professionals are organizing registration events almost daily to get more Hispanic and Black people vaccinated, they are concerned that their efforts won’t be enough.

In Dallas County, the Hispanic community is the largest ethnic group, making up 40.2% of the total population. But by the start of March, only 28.6% of the people vaccinated countywide were Hispanic. The percentage has since increased, reaching 36% as of March 22. By comparison, white residents make up 29% of the county population and 36.2% of those vaccinated.

In Dallas County, as in Texas, the Black community remains underrepresented in the vaccination process as well. And although the numbers are better among the Asian community, refugees, recent immigrants and people without English proficiency have been left behind too.

Hispanics in Texas have been hit particularly hard by the pandemic. Not only they are the ethnic group with the largest share of COVID-19 related deaths —they represent just under 40% of the state population yet more than 46% of the deaths linked to the virus— but they’ve also been severely impacted by the economic disruptions during the pandemic, particularly in the service industry and other blue-collar jobs. 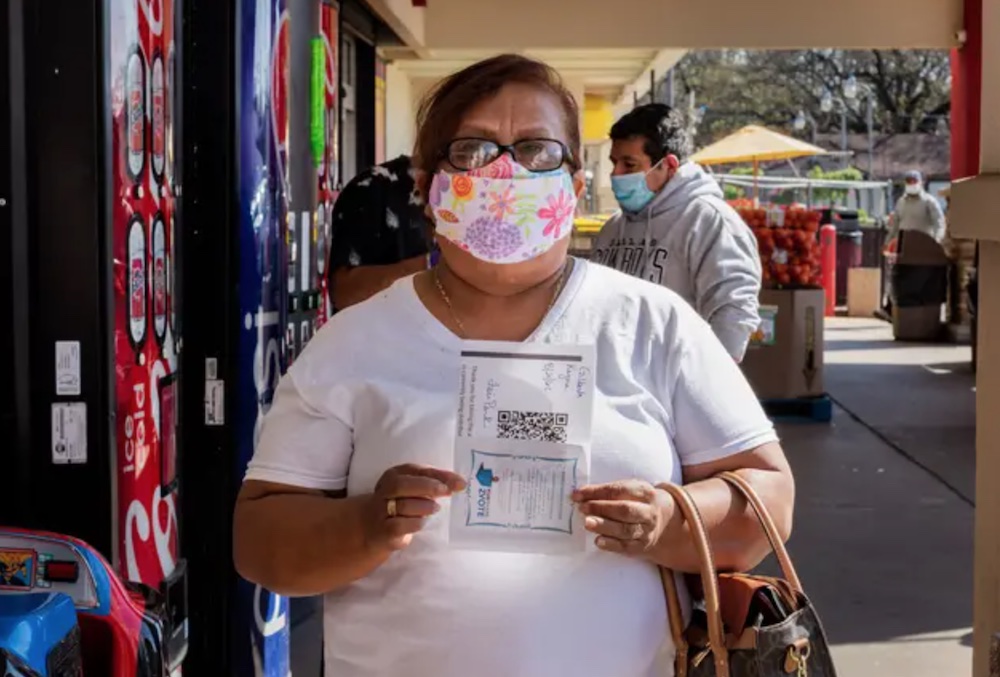 María Gilberta Reyna poses with her COVID-19 vaccine appointment information at a registration event in Irving. (Credit: Carly May for The Texas Tribune)

According to a survey by the U.S. Census Bureau, 55% of Hispanics and 59% of Black people in Texas said that they or someone in their household has experienced a loss of income since March last year. Among white people, it’s 41%.

But many of the early vaccination sites were located far from Hispanic neighborhoods. The Fair Park site, a large drive-thru center at the venue that hosts the State Fair of Texas every year, opened in late February in part to reach communities of color in lower-income ZIP codes. But from Gonzales’ perspective, it didn’t immediately achieve that goal.

“I was working and assisting the operations of the vaccination clinic at Fair Park and I saw these elderly people because we started with 75 and above, and they were predominantly white,” said Gonzales, whose agency manages the site. “I did not see very many people of any other color.”

Leslie Armijo, a member of the organization Don’t Wait to Vaccinate who helped run the registration event at the Dallas grocery store on Friday, said lower-income people have bigger hurdles in getting vaccinated.

During the registration event, Armijo heard from several people who said they couldn’t find transportation to get to the Fair Park vaccination site. She said others have told her they can’t afford the gas to drive across the city or couldn’t leave work to wait for possibly more than an hour in the drive-thru line.

“Everything is connected. The same people that I was taking water to because their pipes busted during the snowstorm are the same group of people I’m trying to get registered. They are the same that don’t have internet access. They are the same that don’t have transportation,” Armijo said. “This is a large population that helps fuel how successful Dallas is, being essential workers and working in grocery stores. But we often forget about their struggles.” 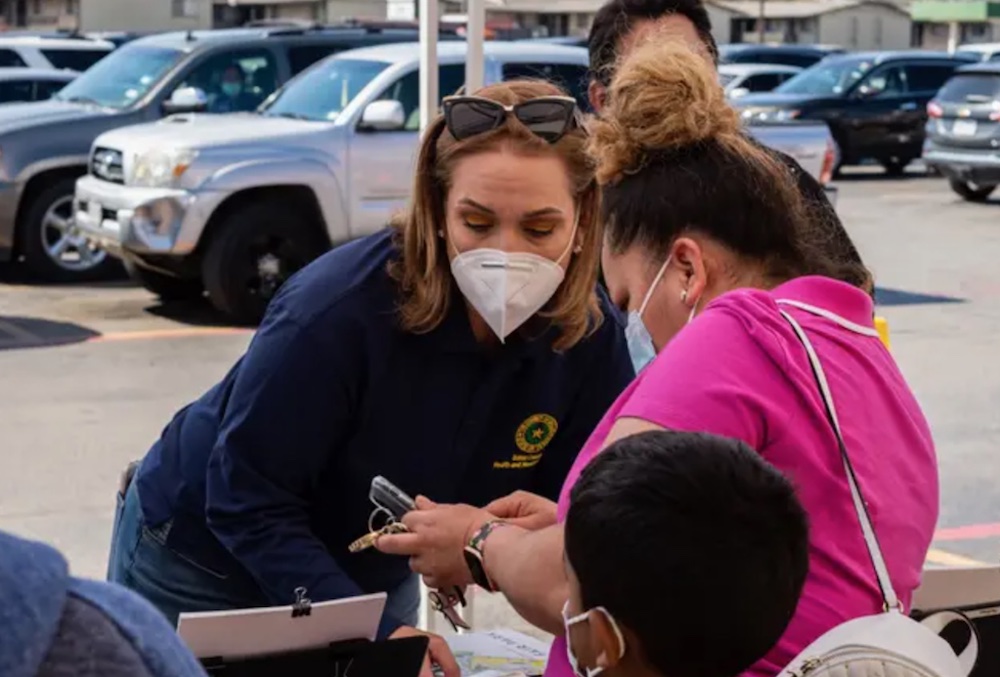 Marisa Gonzales helps a woman register for a COVID-19 vaccination appointment at an event in Irving on March 19. (Credit: Carly May for The Texas Tribune)

Money has been tight during the pandemic for Reyna after her husband lost his job in a pallet assembly company last year. But her main obstacle in reaching a vaccination center is that she is afraid of driving on freeways. Armijo set her up with a group of volunteers that are offering ride-shares to the vaccination center.

“I had to get the vaccine any way I can,” Reyna said.

Other people have no access to computers, bad internet connections or do not know how to troubleshoot problems with online registration forms. Armijo prints paper forms, which she distributes to people who are struggling with this problem, then fills out the online form for them with a group of young volunteers. She said they have registered hundreds of people this way.

But other issues arise: She remembers talking to a man who was more than 90 years old who said he had registered but never heard back. He had a cell phone that was subsidized by Medicaid, a program available for some low-income people, that would not receive text messages without credit in the account.

“When you get that text message, that’s how you’re able to schedule your appointment,” said Armijo, who had to set up an email account for the man and monitor his situation. “This has been something of trial and error because we had no idea about things like this.”

But one of the biggest problems Armijo and others have seen as they try to help Hispanic and Black Texans get vaccinated is a lack of trust in government. Gonzales said that the rhetoric and immigration policies of former president Donald Trump eroded some people’s trust in government, especially undocumented people. Many remain concerned about giving any personal information to government agencies at any level.

“During that administration, it forced people of Mexican descent or any immigrants to hide in the shadows because of the fear of deportation or the fear of going to jail for whatever rhyme or reason,” Gonzales said.

Armijo said that this is why she is not surprised that many Hispanics avoid using free transportation provided by cities to go to vaccination sites. 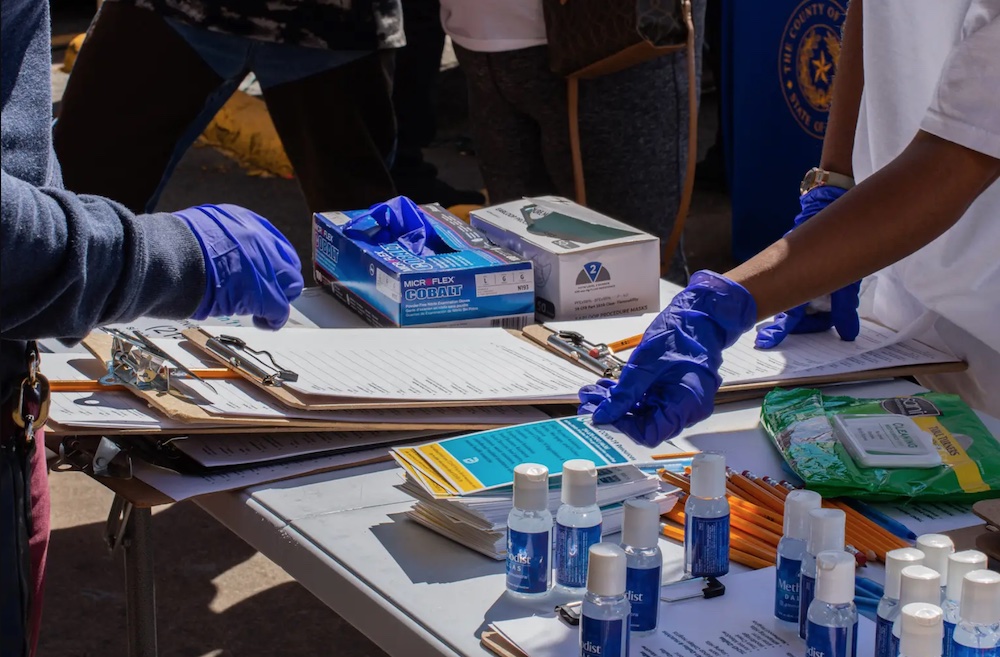 A supply station at a COVID-19 vaccine registration event in Irving. (Credit: Carly May for The Texas Tribune)

“They don’t trust getting on an unmarked van and being told that they’re being taken downtown someplace,” Armijo said. “Someone told me that they went to one of those rec centers to get on the bus, but they saw a bunch of police there…. So they just kept driving because they were scared.”

On top of this, Hispanics have been bombarded with misinformation about vaccines on Facebook and WhatsApp.

Laura Montemayor Cantú, a 47-year-old who lives in West Dallas, saw some of these messages. She said at first she wasn’t sure about whether she should get vaccinated, and her 20-year-old son, who has asthma, was opposed to the idea. But she said after seeing a priest from her church advocating for the vaccine on Facebook, she started to change her mind.

“I told my son that… if he gets the disease, he would probably die. And that I couldn’t live with that,” Montemayor said. “He then told me, ‘Ok, if I get the vaccine, you have to get it too.’”

Gonzales, the Dallas County Health and Human Services outreach manager, said the county has been meeting with church leaders and coordinating vaccine registration efforts with the Mexican consulate in Dallas. Both are institutions that remain highly trusted within immigrant communities.

Meanwhile, some advocates are asking the county to open vaccination centers in churches and other religious buildings.

“They have to bring the vaccines into churches and other institutions that they trust in, because there’s so much fear of the government,” said Josephine Lopez Paul, lead organizer with Dallas Area Interfaith. “They’ve partnered with us in the past for health fairs, but now the thing that is holding things up is the vaccine supply.”

Armijo said that measures like distributing vaccines in churches and creating mobile distribution teams run by local governments, such as those created in Seattle, will be key now that the state is opening the vaccination process to all Texans 16 and older.

“We need to transition to more mobile vaccines. It helps get the word out,” Armijo said. “Part of the reason we are not as successful among the Hispanic and African American community is that they are not aware of how to do it. If we go into the neighborhoods, this is a campaign in itself.”

She worries that many older Hispanic and Black people could continue to have trouble getting vaccinated as the system opens up to more people.

“We need to still focus and target,” Armijo said. “[Or] we are going to leave a lot of people behind.”

Disclosure: Facebook has been a financial supporter of The Texas Tribune, a nonprofit, nonpartisan news organization that is funded in part by donations from members, foundations and corporate sponsors. Financial supporters play no role in the Tribune’s journalism. Find a complete list of them here.

Juan Pablo Garnham reports on urban affairs for The Texas Tribune, focusing on the main challenges of the state’s largest metro areas—Houston, Austin, San Antonio, El Paso and Dallas-Fort Worth, where he is based. He previously worked as senior producer for the podcast In The Thick, editor of CityLab Latino and city hall reporter for El Diario in New York. He has also taught at the Craig Newmark Graduate School of Journalism at CUNY. He is from Santiago, Chile, and the Texas flag constantly reminds him of his home country. Twitter: @jpgarnham.