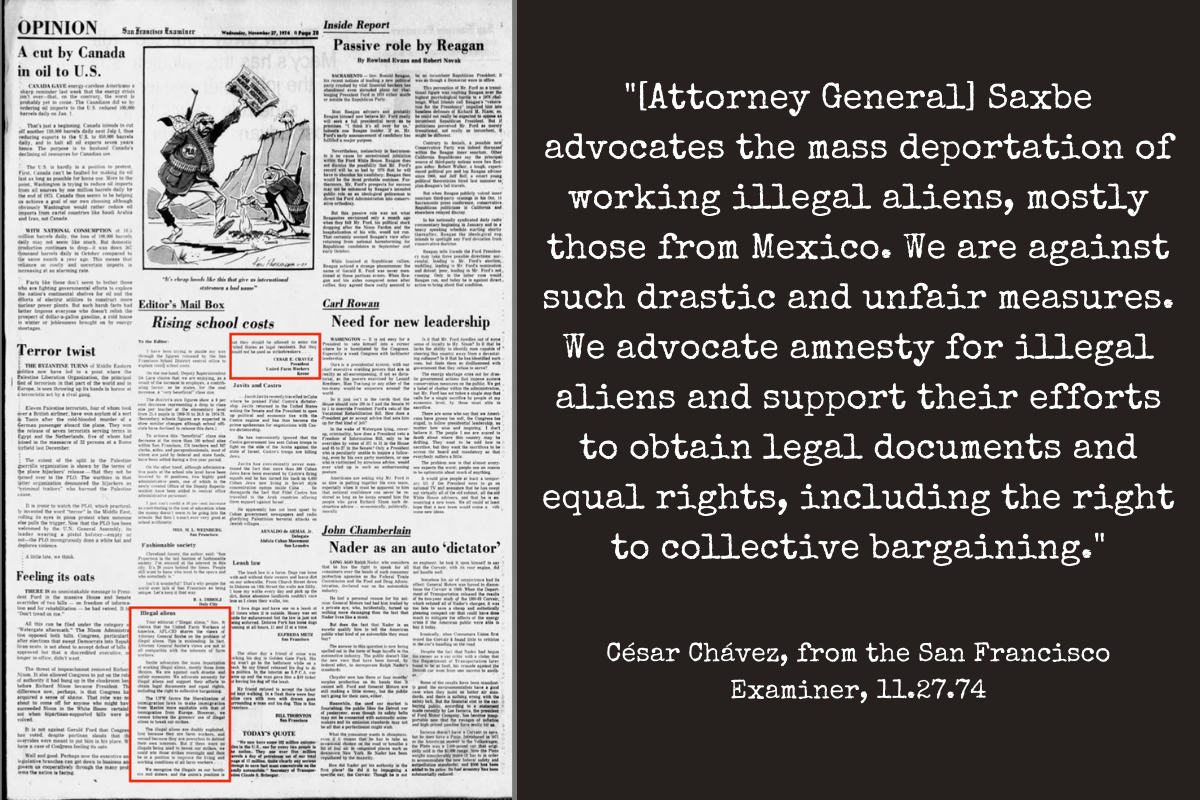 Each year around March 31, also known as César Chávez Day, the predictable, standard pattern of conservative takes (and takes from some Latinos) that Chávez was always a 100% anti-immigrant nativist re-emerges. It is a topic Latino Rebels covered extensively in 2013, essentially disputing the overgeneralizing without any historical context.

One of the major pieces of evidence that proved that Chávez and the UFW had a much more nuanced and complex position about immigration and labor was the existence of a 1974 letter that Chávez wrote to the San Francisco Examiner. Most scholars incorrectly cited this letter as being published on November 22, 1974. Previously, Latino Rebels cited this letter from academic citations, but since 2013, the team kept trying to search for an actual copy of the letter.

On Thursday, Latino Rebels founder/publisher Julio Ricardo Varela was finally able to locate a primary document copy of the letter. The reason? The letter was actually published on November 27, 1974 and not November 22, 1974.

Am acknowledging the terms people used in the 70s, while I write this thread. Chávez clearly stated that @UFWupdates opposes the deportation of undocumented workers. Their position was that he was against companies who exploited undocumented works to break up union strikes.

The letter adds that Chávez advocated "amnesty" for the undocumented, calling them "our brothers and sisters." This was in 1974.

He spoke to the double exploitation of the undocumented by companies and by a lack of worker rights.

I think this letter is definitive proof that conservatives who have tried to paint Chávez as a nativist were just not telling the complete truth, as well as Latino critics. This letter clearly showed a departure.

This is the text of that November 27, 1974 letter written by Chávez and published by the Examiner (of course, there is language from back in the 1970s):

Saxbe advocates the mass deportation of working illegal aliens, mostly those from Mexico. We are against such drastic and unfair measures. We advocate amnesty for illegal aliens and support their efforts to obtain legal documents and equal rights, including the right to collective bargaining.

The illegal aliens are doubly exploited, first because they are farm workers, and second because they are powerless to defend their own interests. But if there were no illegals being used to break our strikers, we could win those strikes overnight and then be in a position to improve the living and working conditions of all farm workers…

We recognize the illegals as our brothers and sisters, and the union’s position is that they should be allowed to enter the United States as legal residents. But they should not be used as strikebreakers…

Here is a copy of the primary document where Chávez’s letter appeared (marked up in red by Latino Rebels): 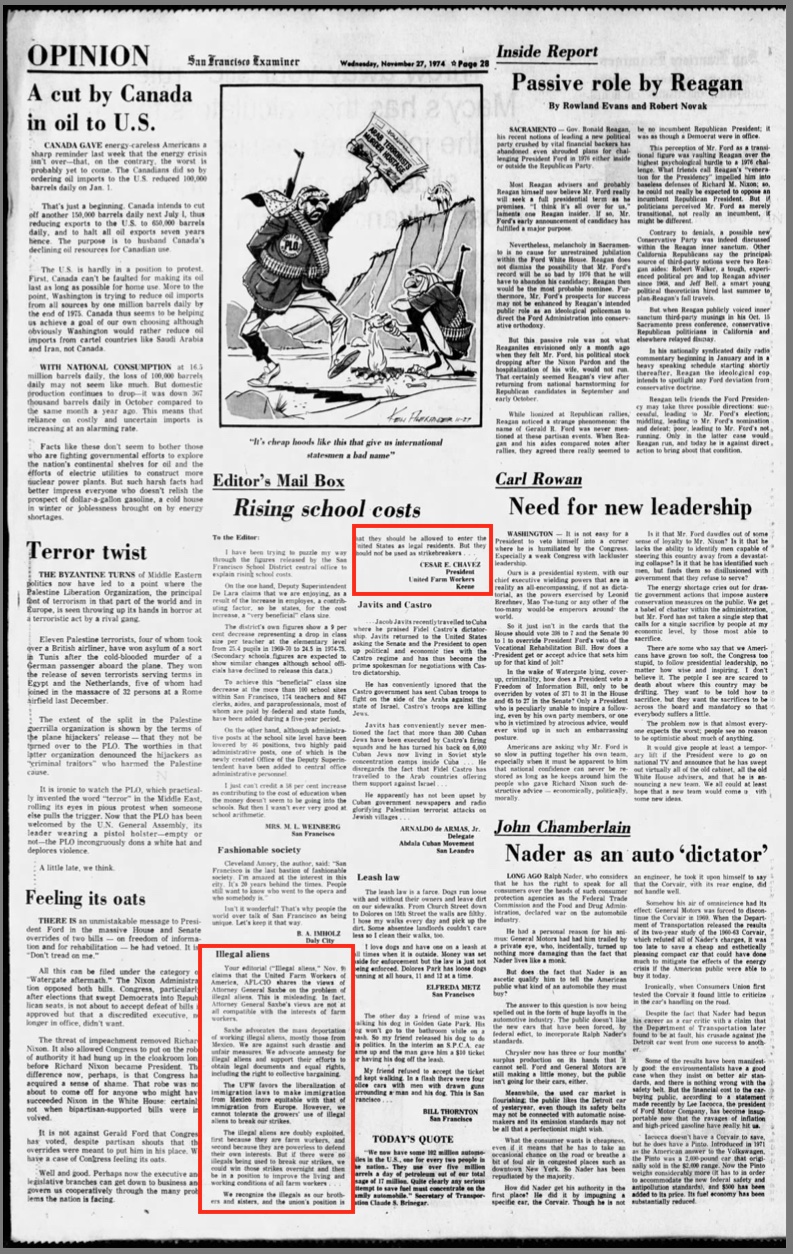 The Chávez letter was in response to the following November 9, 1974 editorial by the Examiner, which called out Chávez as someone “who charges the Mexican illegales [sic] are taking jobs from Latinos who are American citizens.”

Attorney General William B. Saxbe says that illegal aliens constitute a “severe national crisis.” They hold millions of jobs that otherwise would go to citizens, draw heavily on social services and remit large sums of money out of the country. He called for the deportation of a million working illegal aliens —mostly Mexicans— next year.

Saxbe was talking only about illegal aliens, but the entire question of immigration laws needs to be studied by Congress. The U.S. has passed that stage in its development where it can successfully absorb waves of newcomers.

The problem of works from poorer countries entering the more advanced countries to find jobs is not unique with the U.S. Recently Switzerland considered and rejected a proposal to eject 500,000 foreign workers. Severe limitations on immigration have been proposed in Canada. West Germany has clamped down on the recruitment of foreign workers, four million of whom now live in the federal republic.

Saxbe finds an ally in farm worker leader Cesar Chavez who charges the Mexican illegales [sic] are taking jobs from Latinos who are American citizens.

Saxbe urges a $50 million increase in the Immigration Service’s budget, mostly to hire more patrolmen for our sieve-like borders. That would help. As long as America remains the Promised Land in the eyes of the outsider, illegal immigration will remain a problem. The task is to minimize the problem as much as possible.”

Here is a copy of that primary document (marked up in red by Latino Rebels): 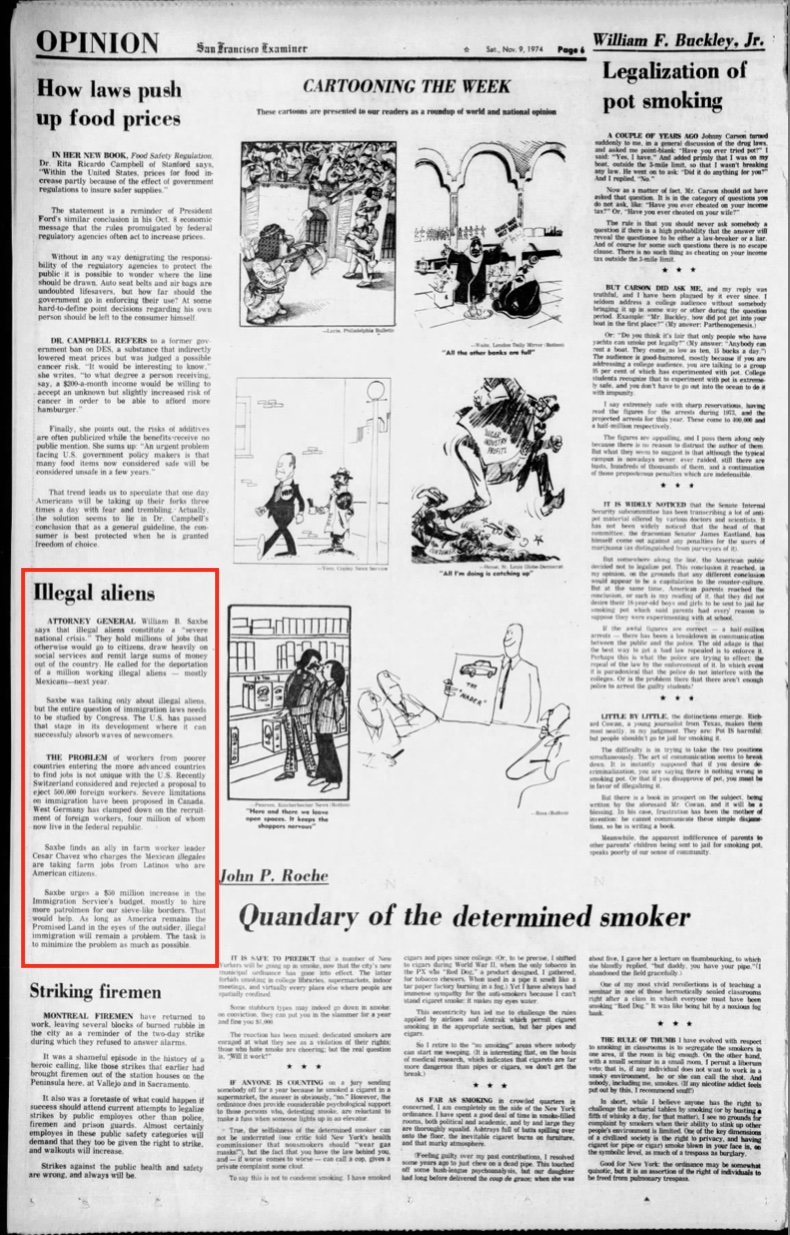