The Texas City of Roma and the Central American Exodus 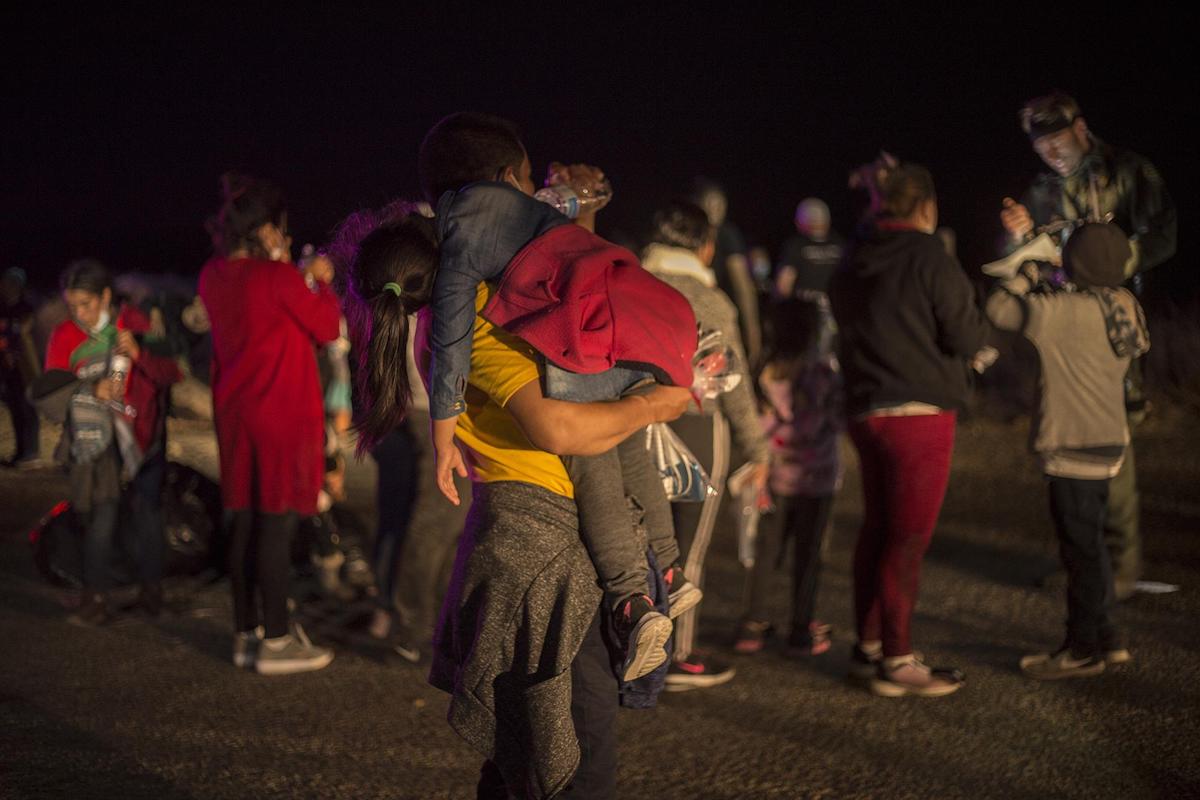 In the span of four hours on Friday evening, March 26, some 300 undocumented adult migrants, most traveling with one or two minors, crossed the border between the cities of Miguel Alemán, Tamaulipas and Roma, Texas to turn themselves in to the U.S. Border Patrol. Accompanying the group were around 20 minors traveling on their own.

Editor’s Note: On April 8, U.S. Customs and Border Protection said that March 2021 was the highest number of southwest border encounters since 2001. This March 27 photo essay by Víctor Peña of El Faro chronicles one recent night in March at the southwest border.

Photos and Text by Víctor Peña

ROMA, Texas — The so-called migrant crisis being debated in Washington is being lived every night in Roma. With a population of around 10,000, Roma is a small city in Texas on the banks of the Rio Grande, just across from Miguel Alemán, of Tamaulipas, Mexico. According to the Department of Health and Human Services, over the month of March, the Border Patrol has detained, on average, almost 500 unaccompanied minors every day.

In the White House, President Joe Biden and his officials are confronting their first migrant crisis, pounding out a response directed at migrants: “The border is closed.” And yet, if you go out to the river any night in Roma you can see that the message hasn’t sunk in for the Central Americans. In just four hours on Friday, March 26, around 300 people crossed the Rio Grande and set off along the dirt roads to Roma, where they were detained by Border Patrol.

The majority of them were Hondurans, then Guatemalans and Mexicans, with a few Salvadorans as well. Many families traveled with their children, and 20 minors said that they had crossed Mexico by themselves. A few of the migrants said that the increase in people migrating is due to the departure of Donald Trump. With his hateful anti-immigrant rhetoric, his dismantling of the asylum system, and the implementation of Title 42 —a public health measure that authorized the nearly immediate expulsion of any border crosser— Trump had finally succeeded in lowering the number of apprehensions.

With the arrival of Biden, a few doors were opened to asylum seekers, which could be partly why thousands of Central Americans decided that now was the moment to head north. Recently, Biden tapped Vice President Kamala Harris to lead diplomatic efforts to stem migration from the region. Meanwhile, every night, desperate Central Americans continue to cross the river and head into the hills towards Roma, hoping, somehow, to improve their lives. 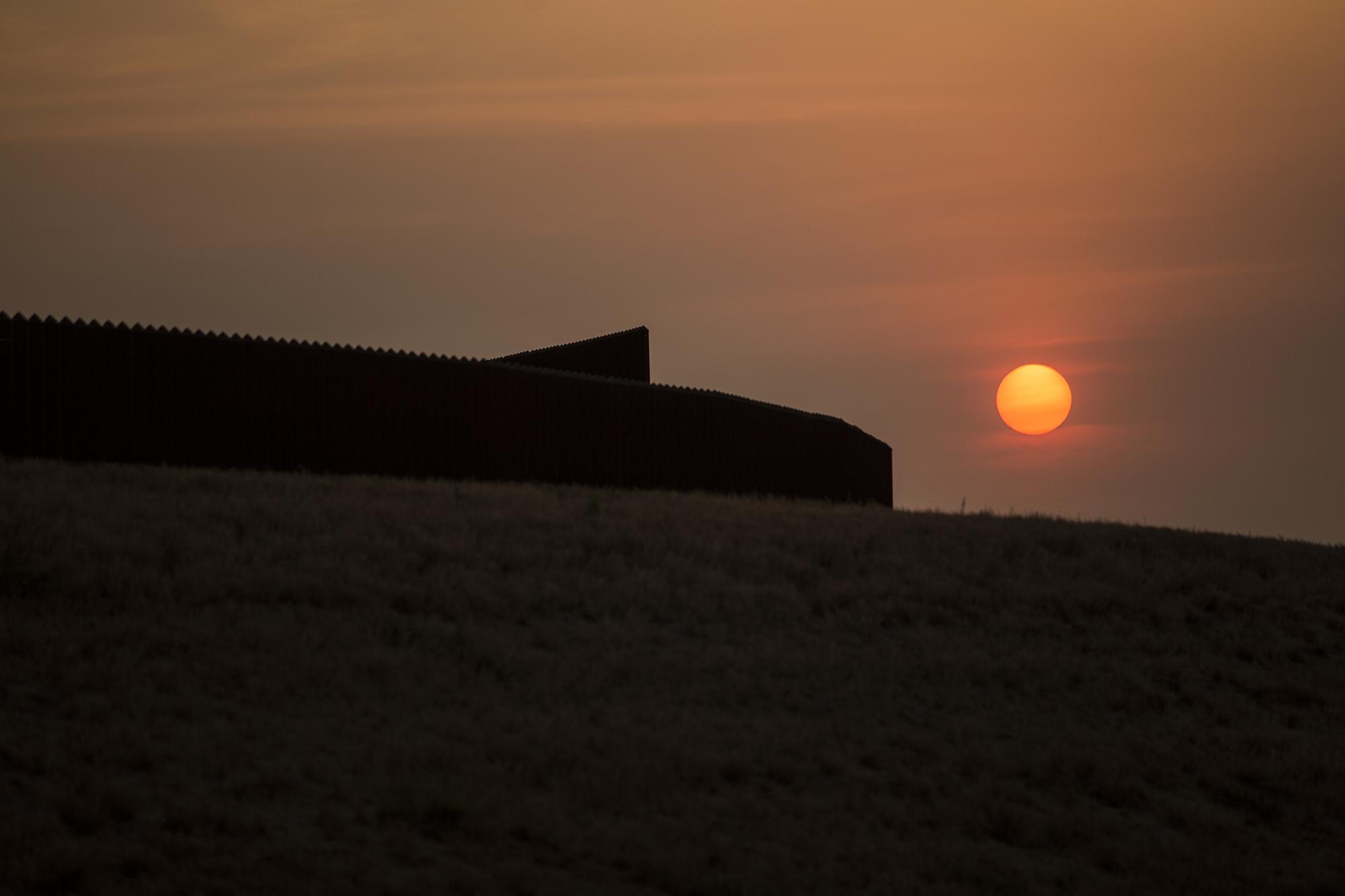 Border authorities find dozens of groups of migrants every day, most of them Central American, waiting for nightfall to cross the Rio Grande. The sun dips below the border wall in Peñitas, Texas, a heavily-surveilled crossing point. 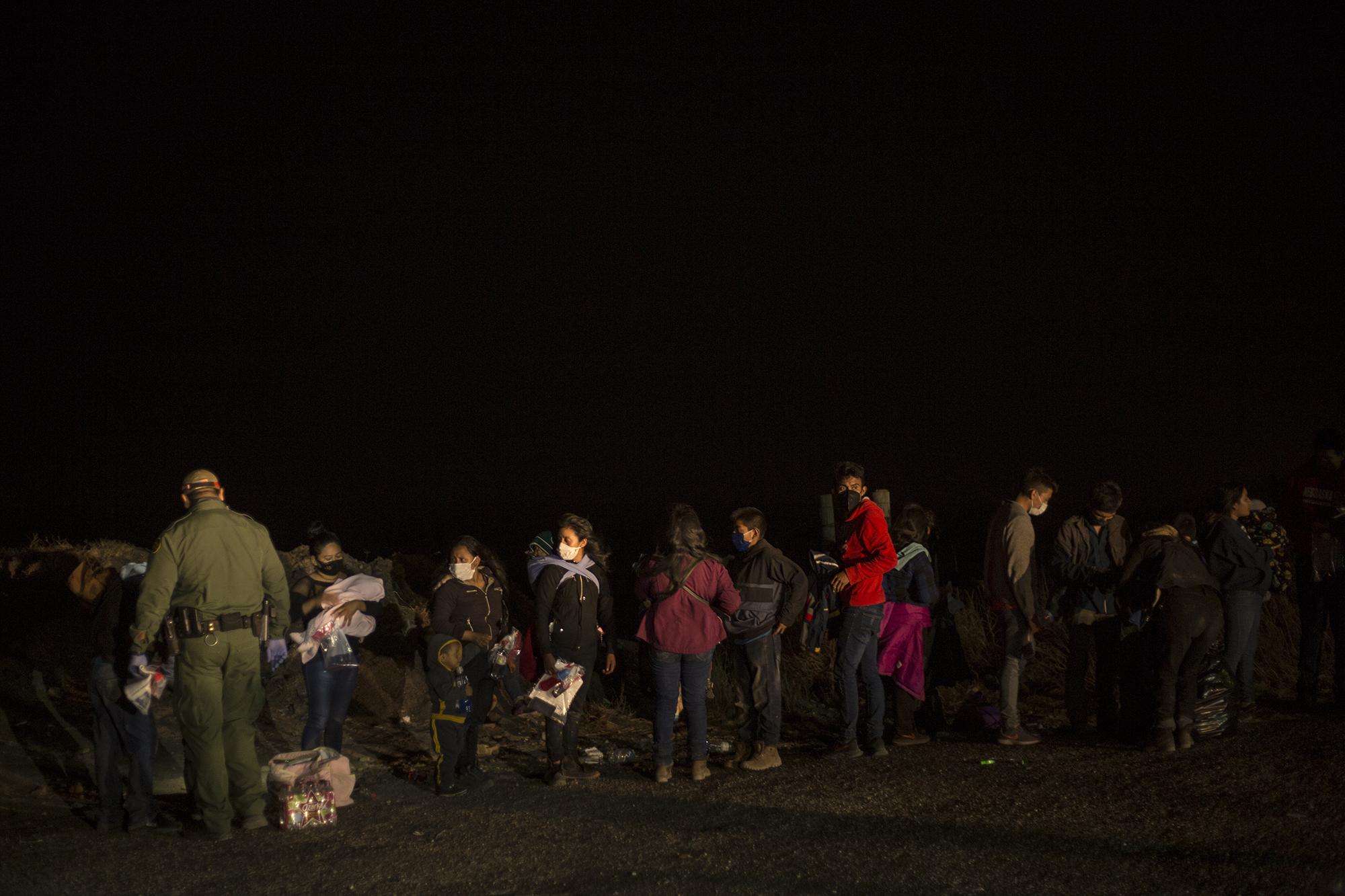 After nightfall in Roma, Texas, nobody was running to evade authorities. Groups of five, 10, even 20 people traveled along the side of the road to turn themselves in to Border Patrol and claim asylum. Every night, agents wait for the groups of Central Americans to arrive. 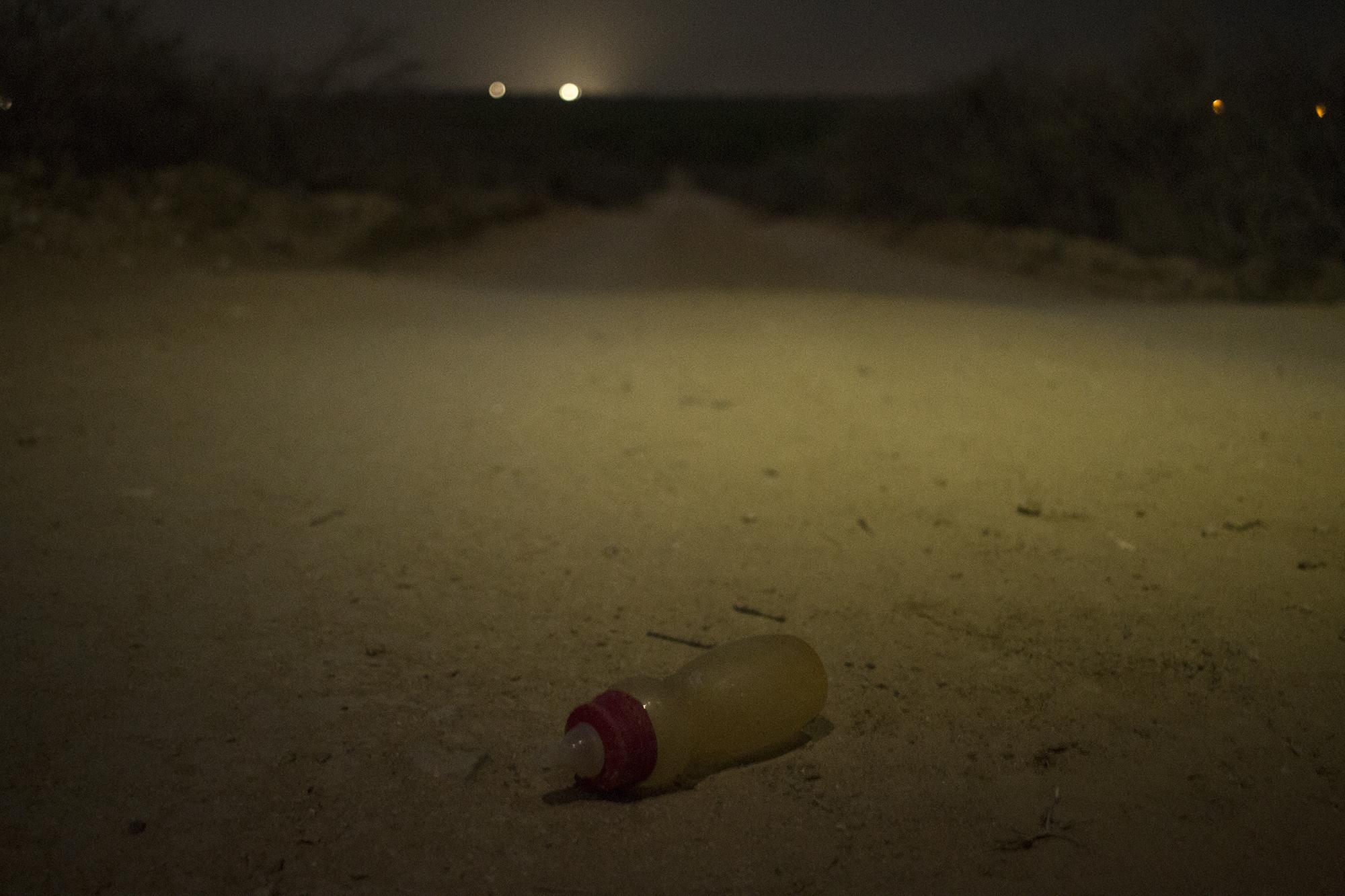 After crossing the river, migrants walk hastily for a half-hour through the weeds and dusty roads, leaving clothing, plastic bags, and other belongings in their wake. 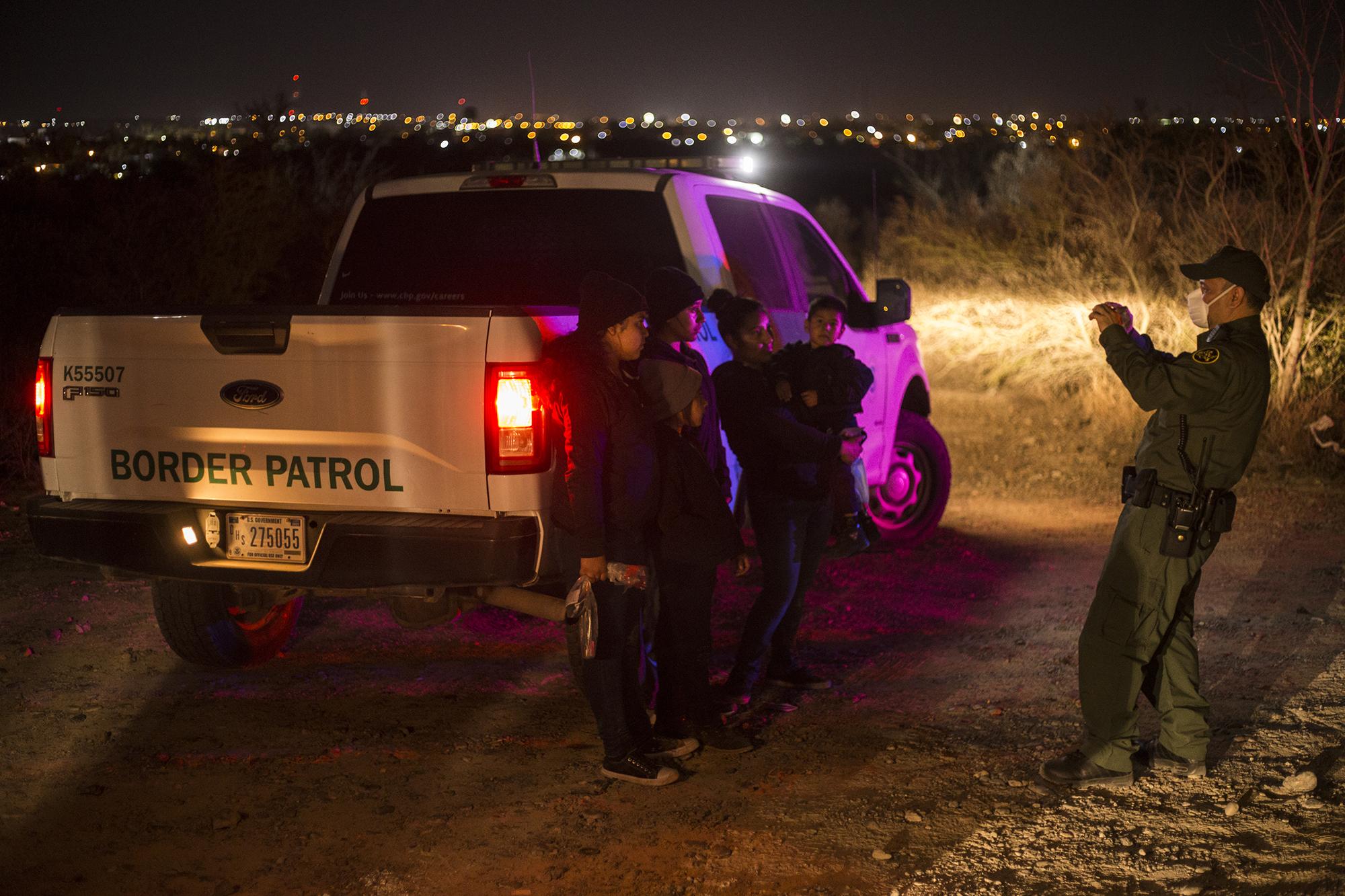 Whole families wait in the bushes. Staying hidden during the day, some cross the river on rafts at night. This Honduran family told a Border Patrol agent they were seeking asylum in the United States. 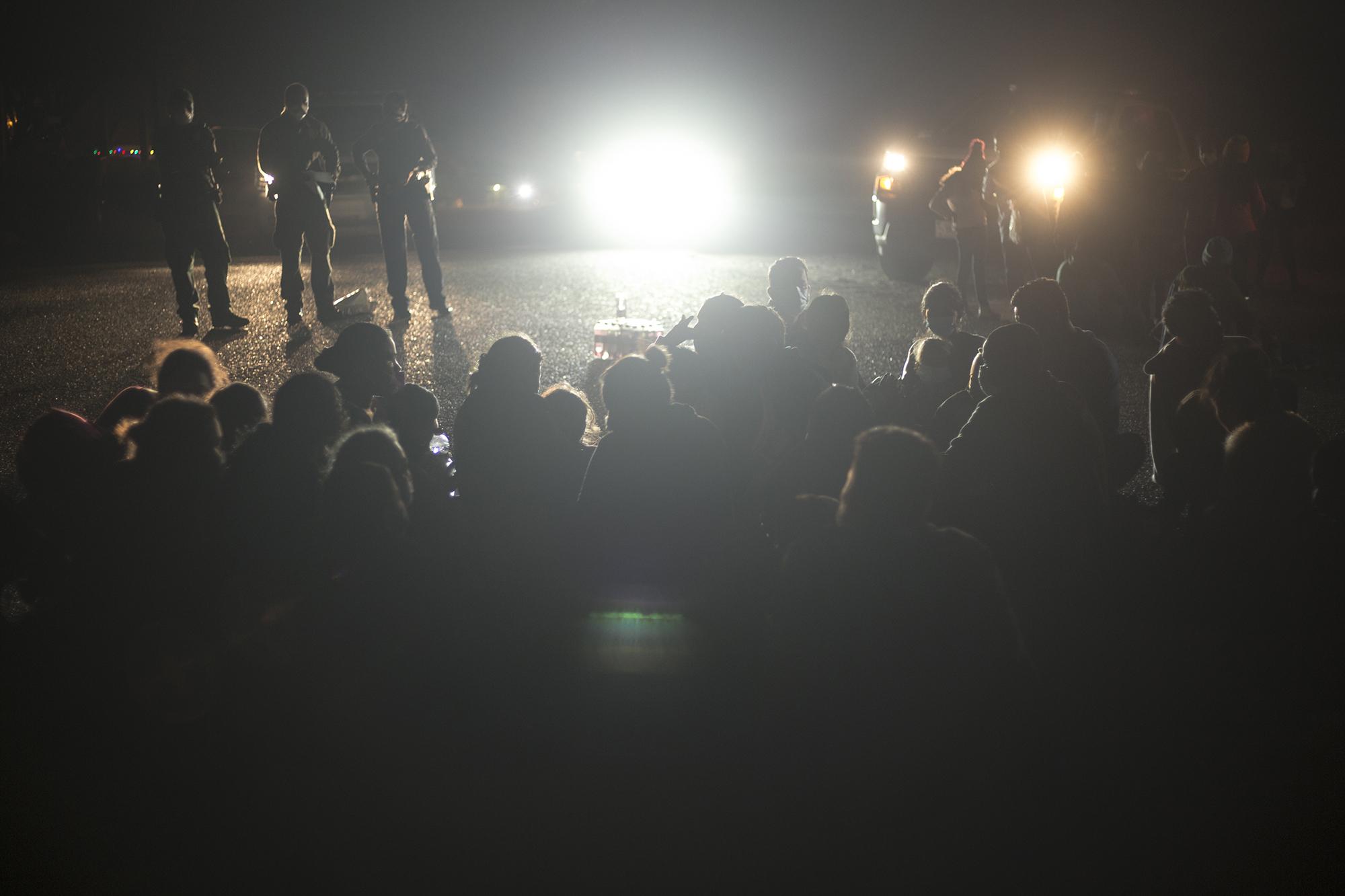 Dozens of minors take shelter in their parents’ arms as a large group sits in the dirt. They wait for hours to formally register with U.S. officials in Roma, Texas. Neighbors approach along the river to leave water and food. 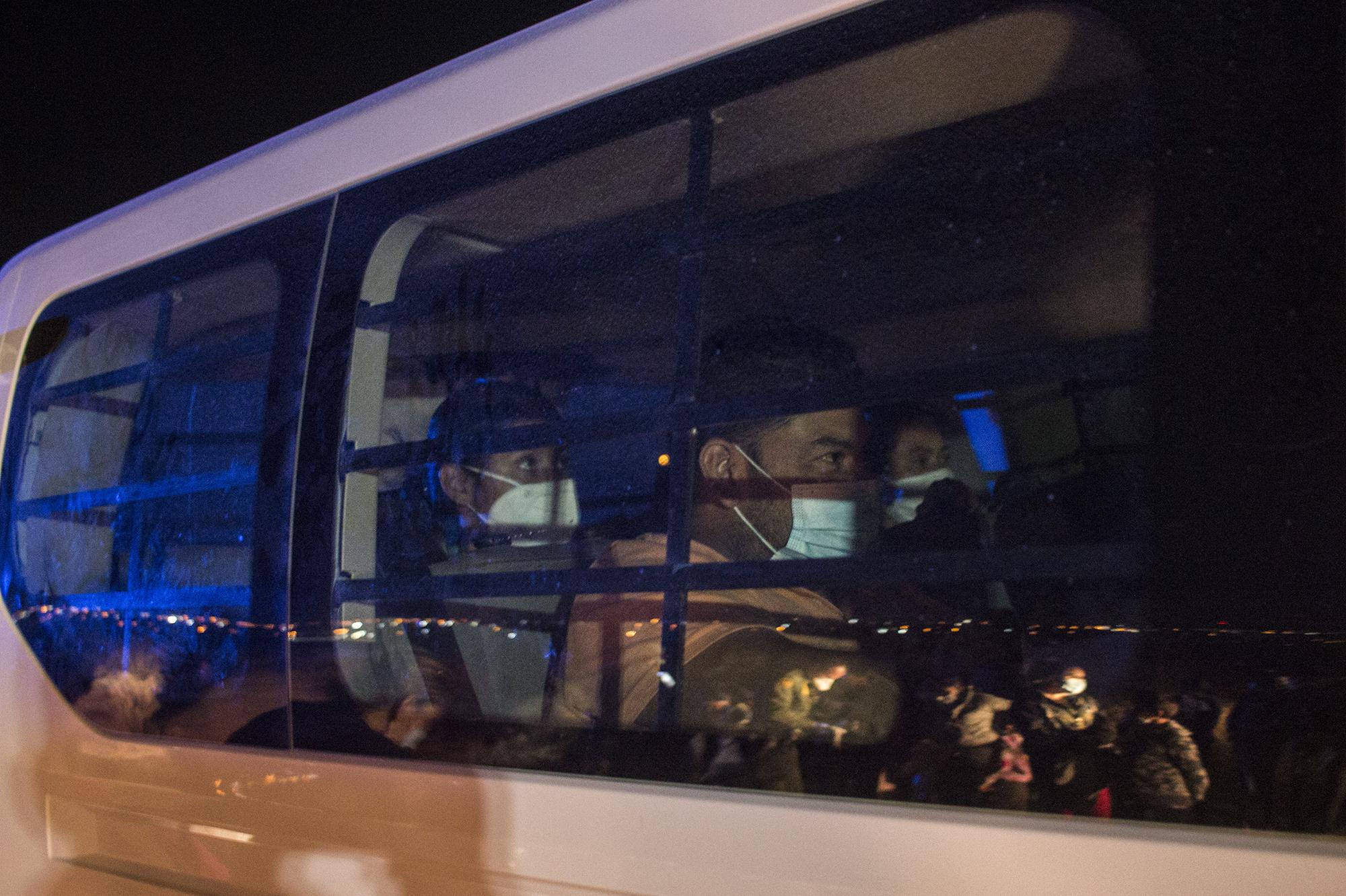 Ten adults in this Border Patrol truck, along with some children, turned themselves in. The radio chatters information about their transfer to Carrizo Springs, a detention center some 220 miles away near San Antonio, Texas. 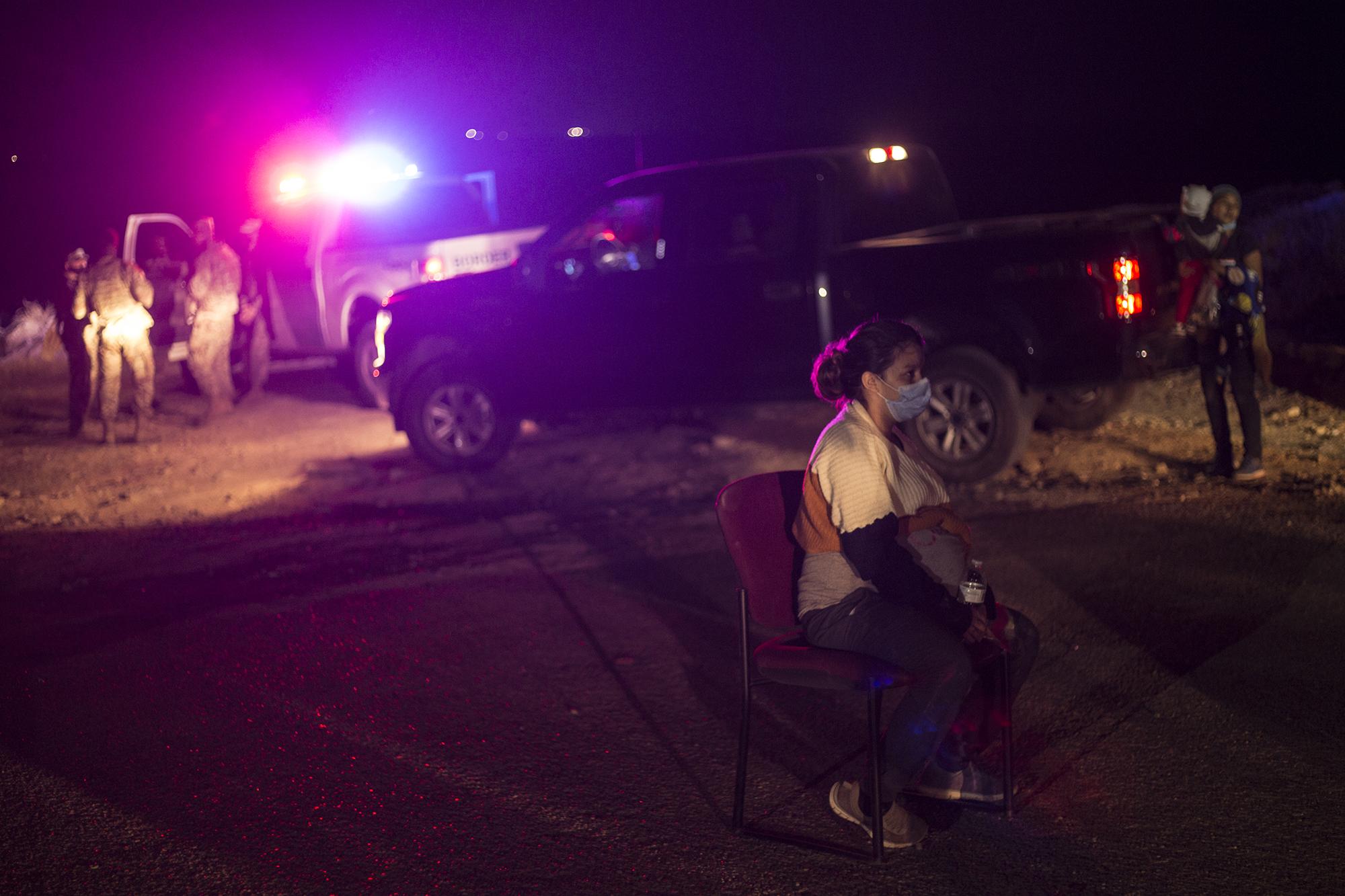 This woman, six months pregnant and traveling alone, crossed the Rio Grande by raft and traveled through the brush for half an hour. 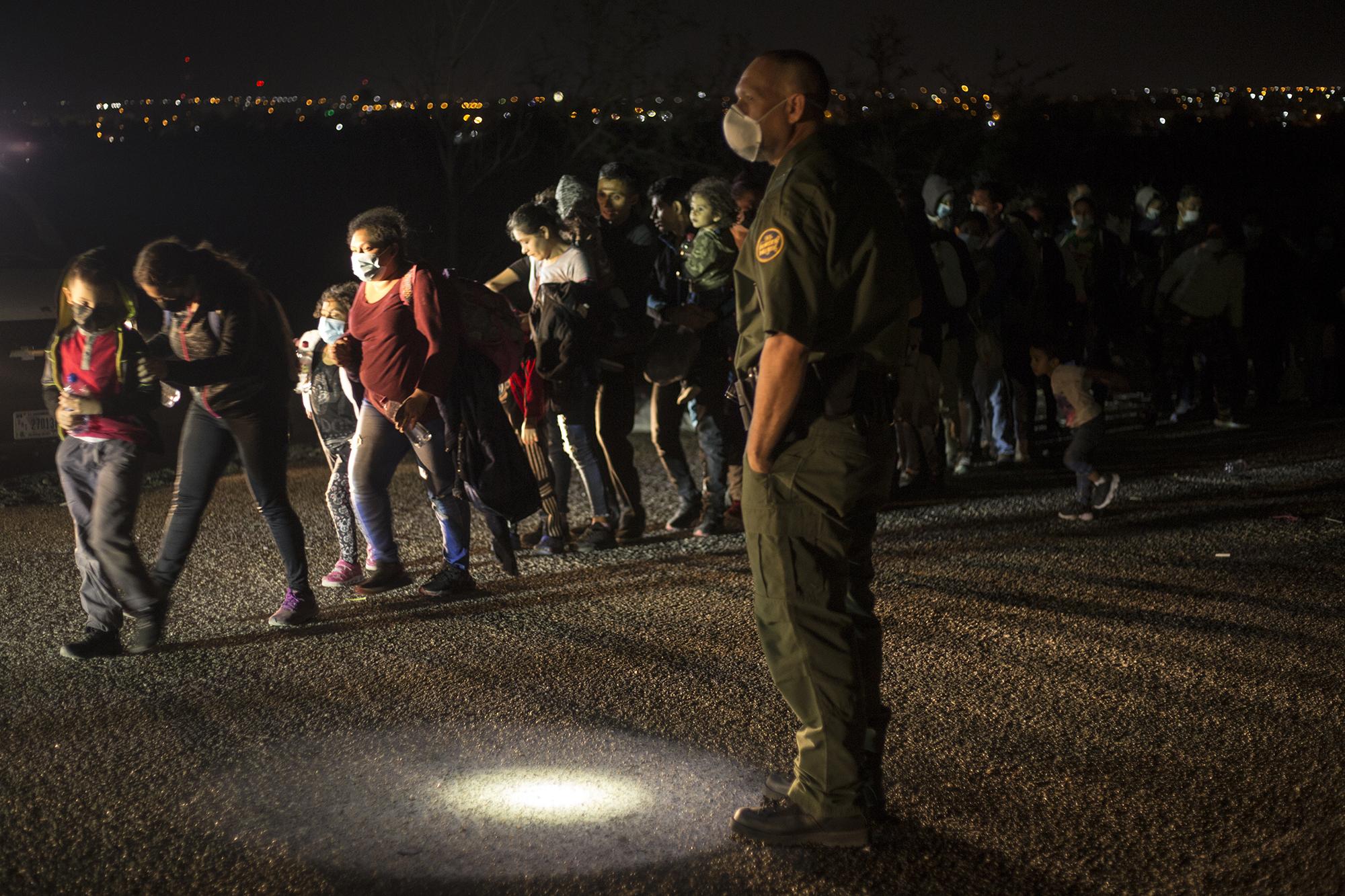 At this key crossing point along the nearly 2,000-mile border between the United States and Mexico, most of the Central American migrants turning themselves in to claim asylum come from Honduras and are fleeing both violence and devastation left by two hurricanes that, amid the pandemic, slammed into the impoverished country last November. 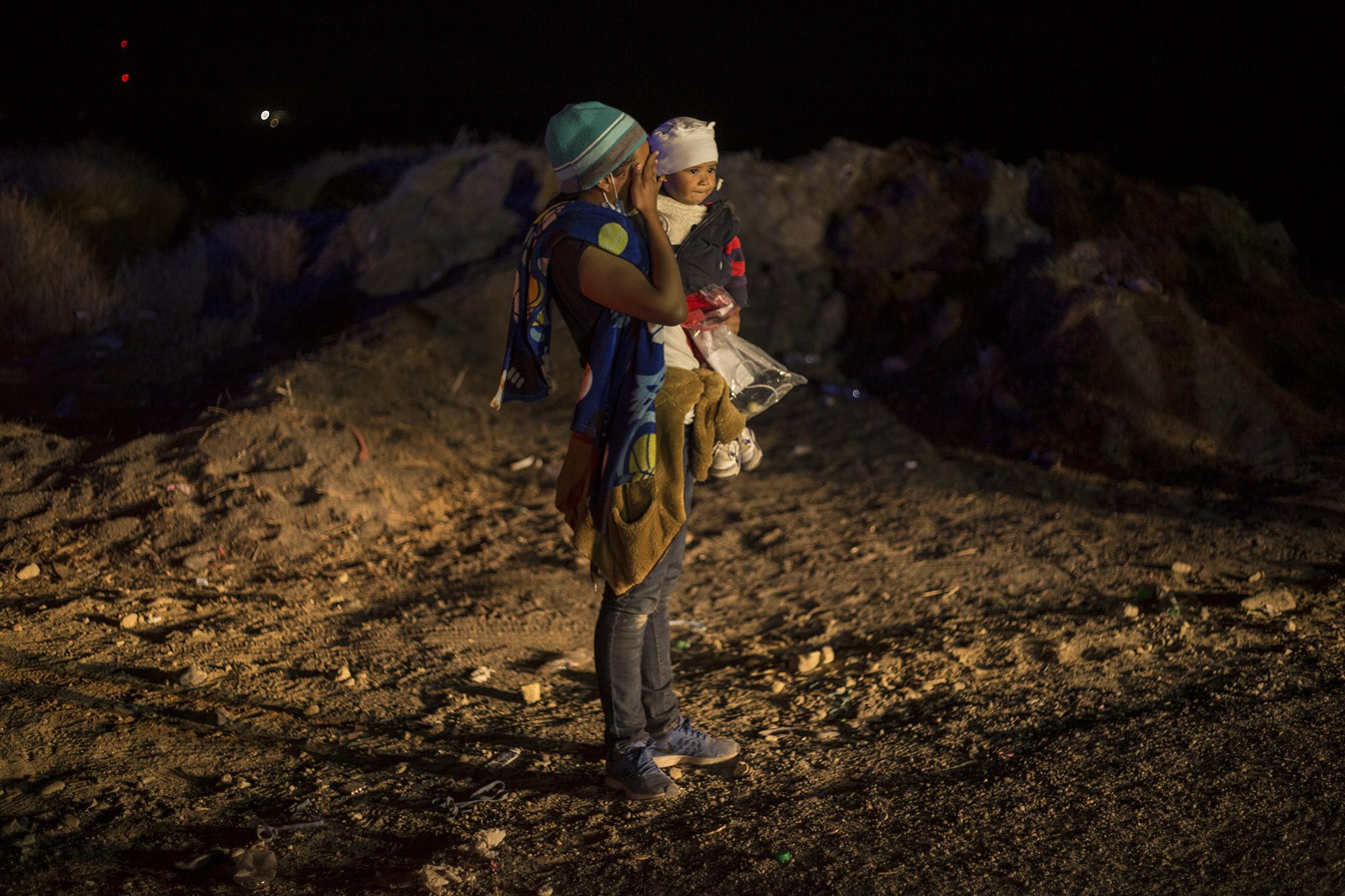 A woman carries her son in her arms in front of Border Patrol agents. She also emerged from hiding in the brush to turn herself in. “I already feel relieved to be here,” she told an agent who received her. The agents on patrol didn’t take the time to talk to each of the detained migrants. 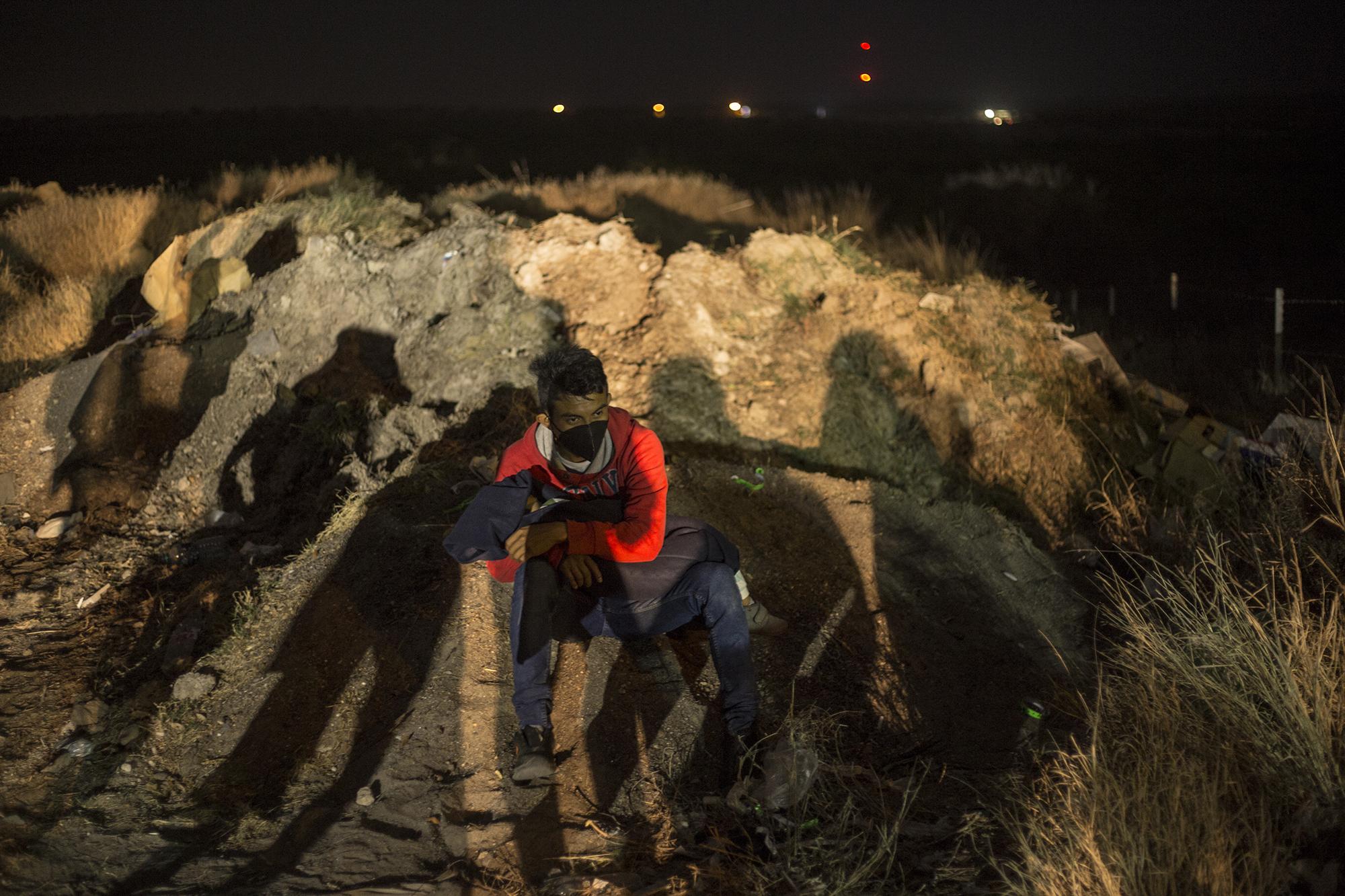 Waiting alongside other migrants with his son in his arms, a man rests as his family registers with officials. The family set off together a month ago from San Marcos, Guatemala. 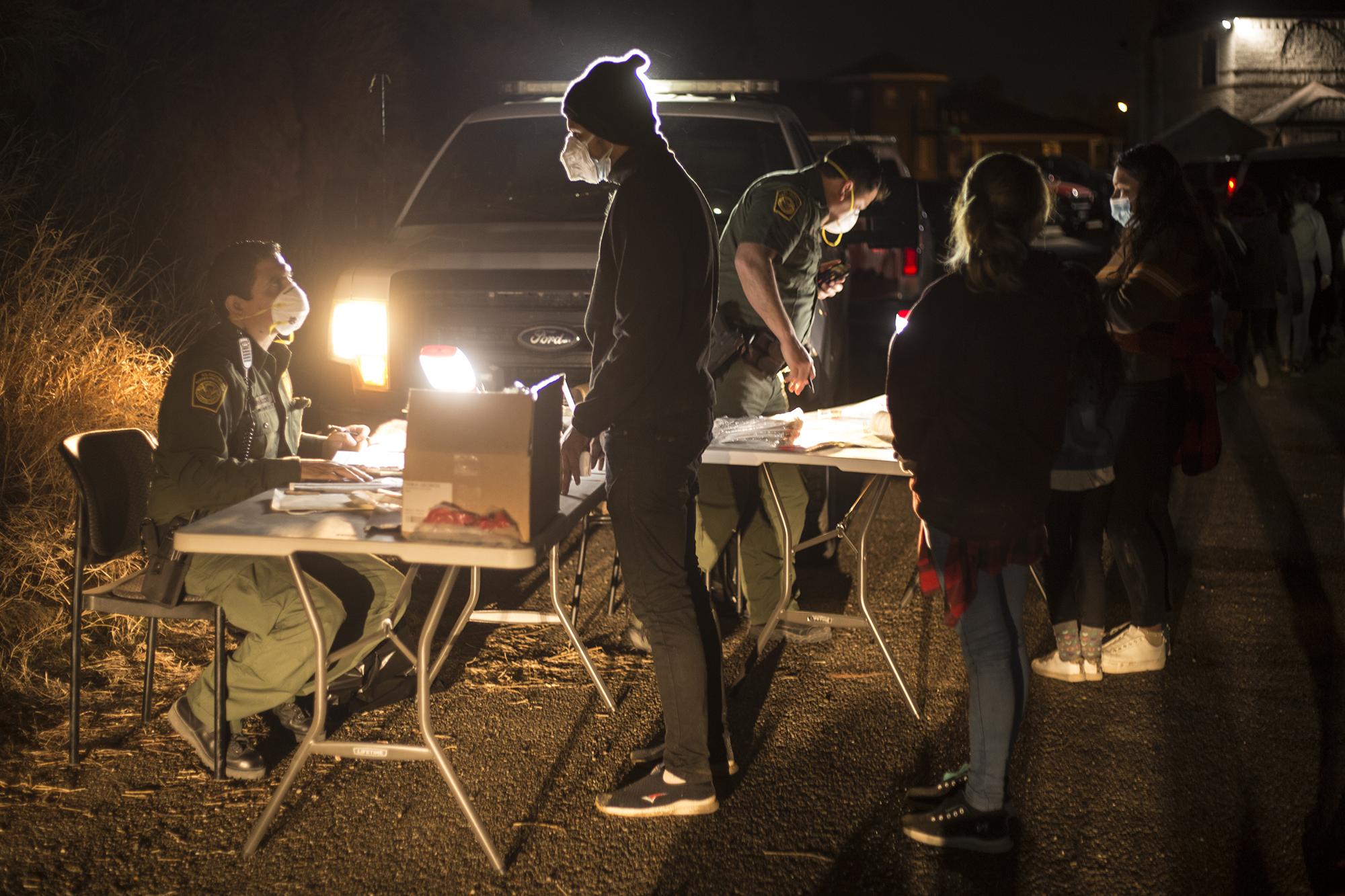 The Border Patrol has erected an improvised processing center on a dirt road parallel to the highway heading to Roma. In the last two weeks, every night agents have processed dozens of Honduran, Guatemalan, and Salvadoran asylum seekers. 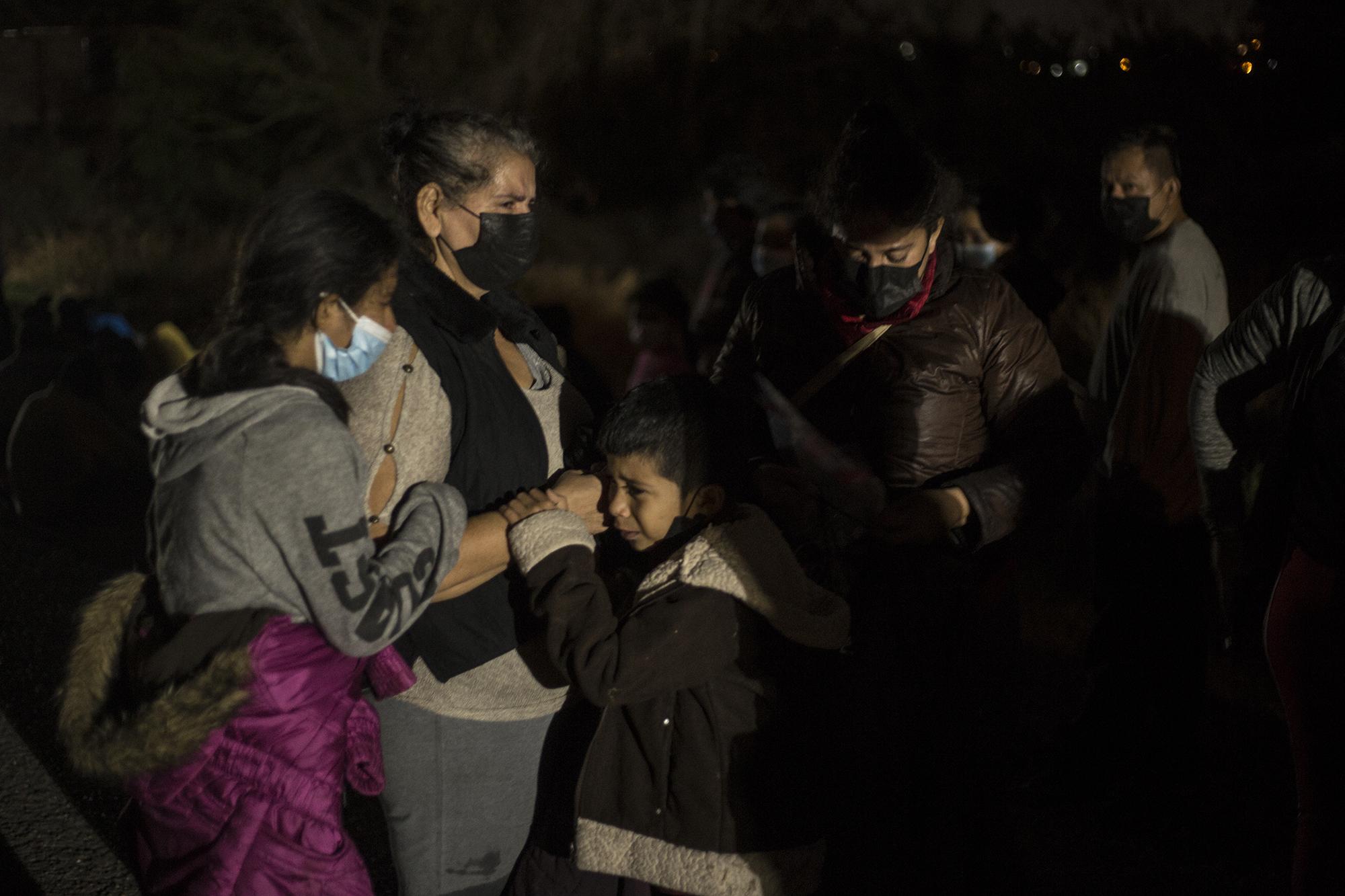 Three children cry and cling to their grandmother, who at first ran in fear when she saw the Border Patrol agents. She was separated from the group and, a few hours later, was transferred to a detention center. The family of five Hondurans are fleeing the violence. “She’s all that I have. If you send her back they’re going to kill her,” her daughter told a Border Patrol agent, as her children hugged their grandmother in the early hours of March 27.

This article was supported by the International Women’s Media Foundation (IWMF). Translated by Roman Gressier and John Washington.

El Faro English is a project from the award-winning Central American media outlet, El Faro, which focuses on hard-hitting investigations, culture, and analysis from Central America and beyond. In addition to translating reporting from El Faro, we publish original investigations and opinion articles and translate stories from partner media outlets throughout the region about migration, politics, culture, historical memory, violence and more from Central American communities in the region, Mexico, Europe, and the United States. Twitter: @elfaroenglish.