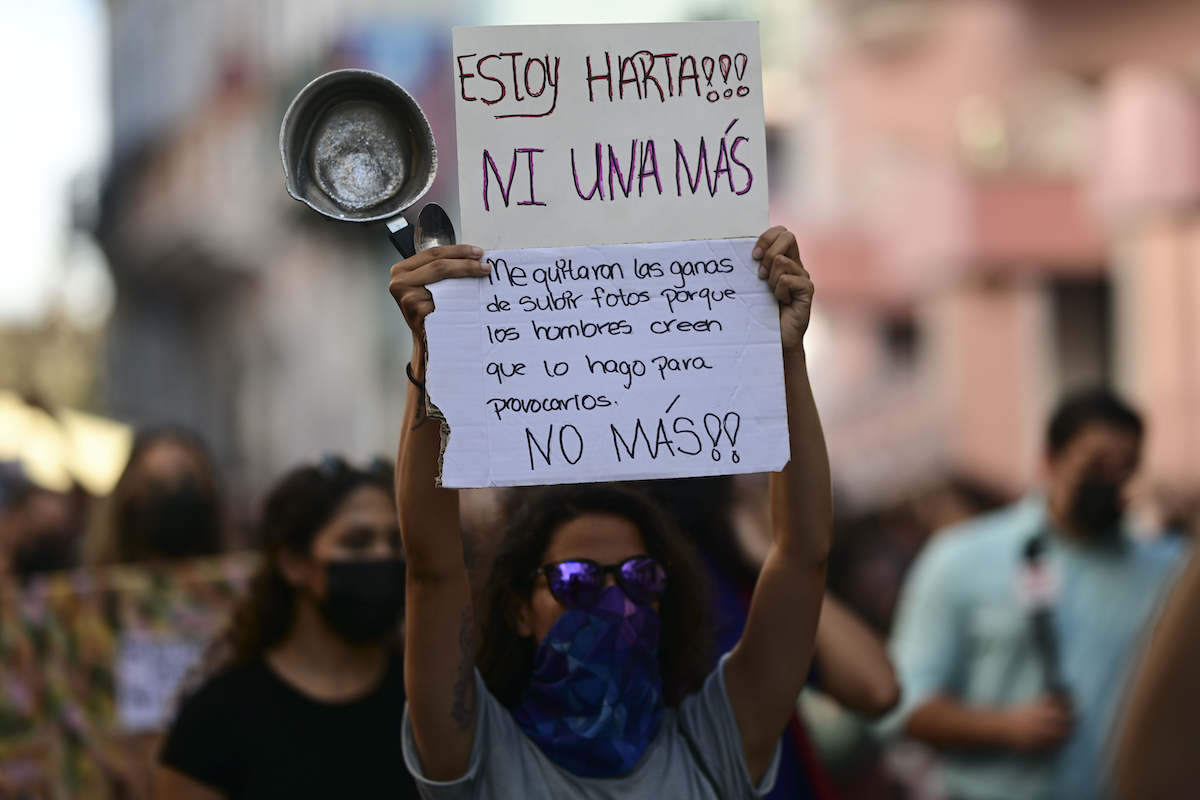 A woman holds a sign the reads in Spanish “I am fed up!!! Not one more,” during a demonstration against sexual violence on Fortaleza Street in San Juan, Puerto Rico, Monday, May 3, 2021. (AP Photo/Carlos Giusti)

Waiting in line, I finally make it to the next to be serviced. In front of me is an older man; late 60’s perhaps. The cashier servicing him starts superficial chatter about marriage, when the man explains he has been married for 30 years and is buying an anniversary gift.

Man: “Congratulations to you too!”

Man: “I have grandkids that age. How old are you?”

Man: “Marriage is a blessing. Always be attentive to your man. God blesses you all since a very early age.”

Cashier: “Not really. I got pregnant since I was terrible! Opening my legs. My mom forced us to marry. But we love each other; we are very happy.”

The individuals engaged in this conversation aren’t from a country governed by Sharia Law where you must marry your rapist to preserve your family’s honor. There were Puerto Ricans and they were speaking Spanish. Most people of this generation would be horrified by the fact this lady got impregnated and was forced to marry at 13 years old in Puerto Rico. The unfortunate truth is that it isn’t shocking at all for Puerto Ricans on the island and the Diaspora.

Patriarchy, machismo, and family shame based on religious teachings are a strong foundation in Puerto Rican social principles.

In legal terms, Western culture fully condemns the barbaric policy of marrying your rapist. However, it wasn’t until 2018 that the state of Florida, for example, allowed marriage without any minimum age for a girl if she was pregnant and a judge approved of the marriage.

In Puerto Rico? The minimum age of consensual sex is 16, but while other states and countries around the world try to illegalize child marriage and strongly prosecute statutory rape, Puerto Rico did the opposite in 2009. Legislators presented a proposal to lower the age of sexual consent from 16 to 14, arguing that complaints from protective parents are overwhelming courts and teens should not be prosecuted for their sexual curiosity.

While this initiative quickly died, it reflects the predatory doctrine —as contradictory as that sounds— that has dominated the political systems and social norms for centuries. Sexism and misogyny in Christianity come from a patriarchal, hierarchical, and oppressive interpretation —or frankly said, manipulation— of the Bible. To question this status quo is to be branded a “troublemaker,” “heretic,” “puta,” “loca,” “feminazi,” and other nonsensical insults. This toxic religiosity, often branded as social values, has indoctrinated its adherents to dehumanize women related to every aspect of society.

Such an ignorant mentality has now led to a deadly epidemic on the island.

In Puerto Rico, femicide occurs approximately once a week, making Puerto Rico one of the highest femicide rates in the Americas. There have been 11 women killed this year. In 2020, over 60 women were murdered. The problem has escalated due to environmental, economic, political, and health crises, including the COVID-19 pandemic—where survivors have been forced to stay indoors with abusers.

Even though Law 54 —passed in August 1989— is in the books, institutionalized discrimination and machismo culture from police officers, attorneys, prosecutors, and judges have paralyzed its mission. In fact, a database supports claims that the police department is failing to investigate the violent deaths of women. The page “Seguimiento de casos” track cases of murdered and disappeared women in Puerto Rico. Most recently, there is the case of Andrea Ruiz, who filed twice for a restraining order against her ex-boyfriend in March 2021. A judge in the municipality of Caguas denied her multiple petitions. Ruiz’s body was found partially burned in the town of Cayey shortly thereafter.

Some may argue this is a generational issue. A sobering truth proves the opposite. Keishla Rodríguez Ortiz was only 27 years old, and so is her culprit, Félix Verdejo. The former Olympian is now eligible for the death penalty in her gruesome murder.

La Colectiva Feminista en Construcción sparked a movement called “Vivas Nos Queremos,” demanding the government to take action. Despite declaring a “state of emergency,” Governor Pierluisi had proposed a $7 million fund to tackle the issue, but La Junta only approved an abysmal $200,000. Even for elected officials and for the PROMESA board, women do not matter. And now, fed up, people are taking the streets. Given the pressure of these protests, La Junta finally moved on Wednesday to approve the entire $7 million proposed. We demand things to change, and it takes all of us.

To tackle this, Puerto Rico must unlearn some grotesque, yet normalized machista behavior.

Puerto Ricans, let’s be allies. Help victims become survivors and thrivers. If a friend or a family member tells you they’re worried about their well-being, stay alert. Do not judge, let alone dismiss the issue. If they are out with the abuser, ask them to share the location from their mobile. Share this list of numbers and entities in Puerto Rico that are available. There’s also this list of shelters that can save lives.

One response to “OPINION: Machismo in Puerto Rico Kills”