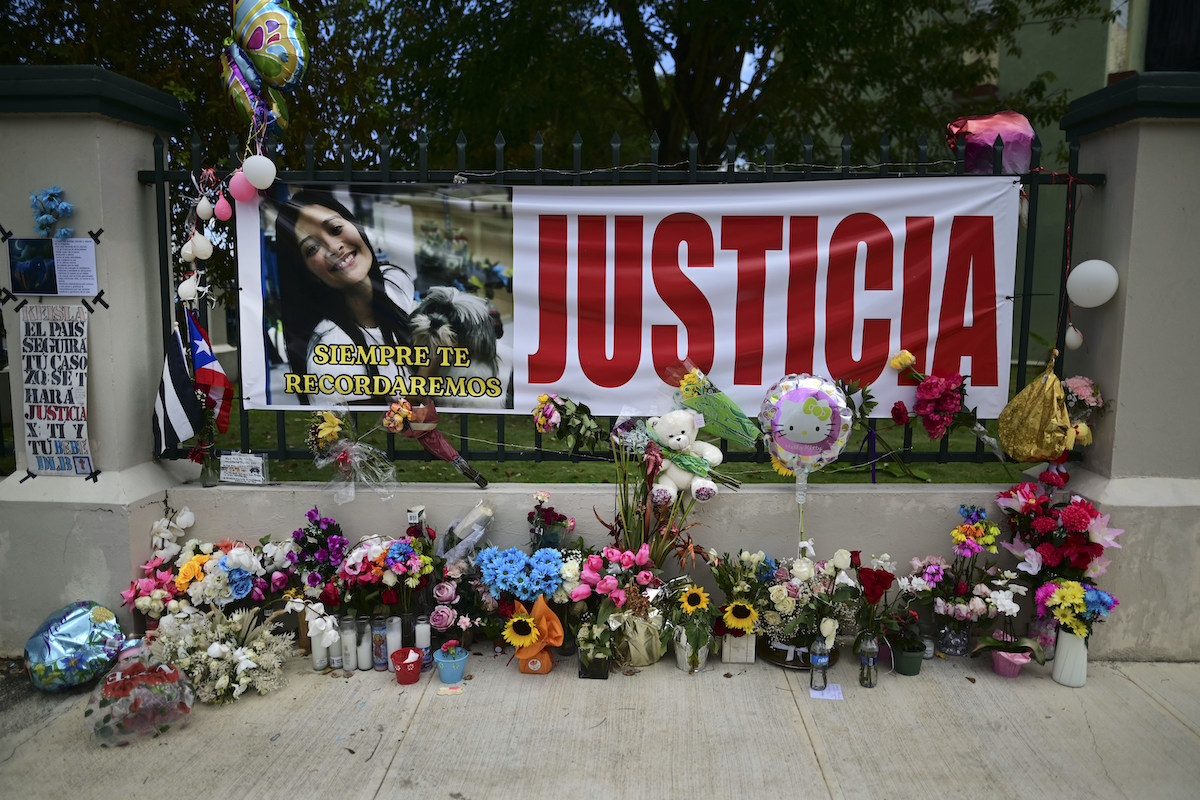 Memorabilia in honor of Keishla Rodríguez was placed at the entrance of the Villa Esperanza housing complex, where the 27-year-old woman used to live, in San Juan, Puerto Rico, Thursday, May 6, 2021. (AP Photo/Carlos Giusti)

The indictment was announced as dozens of people —some bearing flowers, balloons or small gifts— attended the wake of 27-year-old Keishla Rodríguez, who was reported missing a week ago and whose body was identified on Sunday via dental records.

An FBI complaint, based on testimony from an unidentified witness, accused Verdejo of punching Rodríguez in the face, injecting her with a syringe filled with an unidentified substance bought at a public housing complex, binding her arms and feet with wire, tying a block to her and then throwing her off a bridge at 8:30 a.m. last Thursday. Authorities said Verdejo then stood on the bridge and shot at her body that authorities found in a lagoon near Puerto Rico’s capital on Saturday.

“This is a case that has shocked Puerto Rico,” said Carmen Romero, who had traveled roughly an hour from the coastal town of Arecibo to pay her respects.

Verdejo, who is married and has a young daughter, turned himself into authorities on Sunday night and is being held without bail. He is accused of kidnapping and carjacking resulting in death and with intentionally killing an unborn child, in addition to using and carrying a firearm during a violent crime. Neither Verdejo nor his attorneys have commented on the case.

Also charged in the case is Luis Antonio Cádiz, who on Thursday was ordered held without bail. The victim’s parents said in a press conference at the funeral home that they did not know him, adding that they needed their space and did not want to talk about the case.

“What I want is justice for Keishla,” said her mother, Keila Ortiz. “We’re going through a pain that Tony and I never imagined.”

The autopsy report has been completed, but authorities said they won’t release details yet on exactly how Rodríguez died because the investigation is ongoing.

The victim’s father, José Antonio Rodríguez, told WAPA TV on Wednesday that he is not in favor of the death penalty.

“That doesn’t solve anything for me. What’s done is done,” he said. “Let him remember every day who my daughter was.”

Verdejo (27-2, 17 knockouts) represented Puerto Rico in the 2012 Olympics and became a professional boxer that year, competing in the lightweight division.

Amid growing accusations that Puerto Rico’s government hasn’t done enough to protect women and victims of domestic violence, the island’s justice secretary announced Tuesday that prosecutors will now be required to appear in court for probable cause hearings where a judge rules whether an alleged abuser should be arrested.

The announcement comes amid anger over the case of another woman, Andrea Ruiz, who was recently killed and her body set on fire after she filed a domestic violence complaint that a judge dismissed. Gov. Pedro Pierluisi has said that the government failed Ruiz.