OPINION: All Colombians Must Unite and Fight for the Legitimate Right to Protest 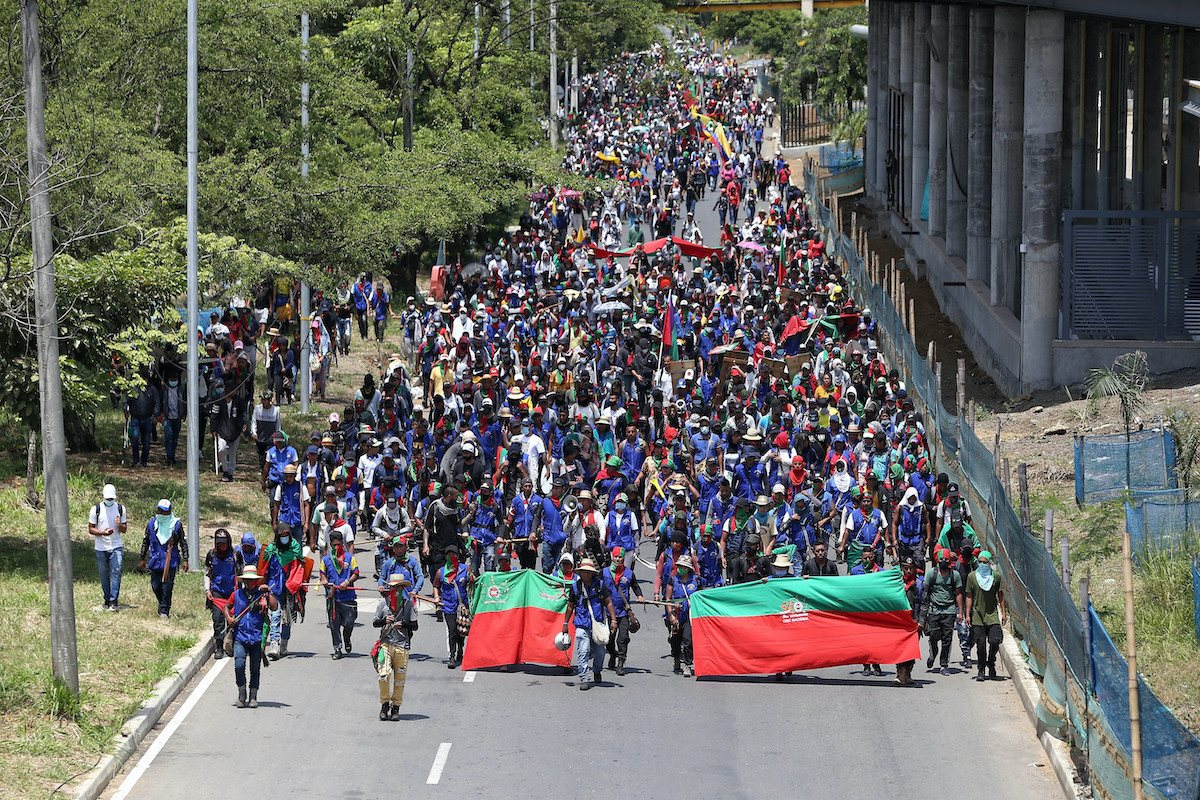 Indigenous people march in protest against a tax reform proposed by the government, in Cali, Colombia, Wednesday, May 5, 2021. (AP Photo/Andrés González)

By Hanni Jalil and María Molinares-Torres

An unpopular tax reform bill triggered the current cycle of protests in Colombia, which started on April 28. But opposition to the bill was just the initial spark in a country where social leaders, environmental activists, Indigenous communities, Afro-Colombian communities, labor unions, workers, peasants, and students have been fighting for greater economic and social justice, less corruption, and democratic rule.

On paper, Colombia is a democracy —a social state under the rule of law— however, one has to wonder if this is so only in name. The grievances and demands embodied by posters, slogans, and chants from the streets unite a heterogeneous group of protesters demanding the end of political, economic, and social oppression.

People on the streets are asking for an end to massacres, the assassination of social leaders, forced displacement, and corruption. They are protesting the state’s inability to guarantee the safety and life of marginalized communities (Indigenous, peasant, Afro-Colombian) and ex-FARC combatants. They are calling out the state for its continuous attacks on the 2016 peace accords.

The National Strike sought to stop the implementation of a reform that would expand the tax base by taxing Colombians earning more than $663 dollars a month in a country where the minimum monthly wage is $234. The bill also proposed the regressive taxation of basic necessities such as eggs, meat, milk, fish, and gasoline and utilities like water, gas, electricity, and internet.

Opposition to the bill was widespread, as taxing the working middle class would only help to deepen poverty and social inequality. Before COVID-19, Colombia ranked among the most unequal countries in the region. The pandemic’s impact has increased poverty, hunger, and desperation. An earlier cycle of protests in 2019 was truncated by the pandemic, but rather than dissipating the grievances that were boiling under the surface, the pandemic exacerbated social inequality, laying bare the fault lines of one of the continent’s most unequal societies. Not surprisingly, the economic impact of the pandemic has, like the virus, affected Colombia’s most vulnerable populations.

In 2020, Colombia’s economy shrunk close to 7% while unemployment rates rose above 16%. Poverty, hunger and devastation have increased in a country where the majority of its population works in the informal sector. It was in this context of worsening economic conditions that the government proposed the bill. But remember, the tax bill was only a trigger. The grievances manifested over the weeks of mobilization gather social, political, economic, environmental claims manifested in a peaceful movement that has only occasionally resorted to violence.

President Iván Duque announced that he would redraft the tax bill, renegotiating its terms, and yet people gathering in Colombian streets continue to find reasons to fight. Why is this the case? Simply put, this conflict is about redress, it is about structural transformations that would grant the historically dispossessed a voice and access to health, education, social services, economic opportunity, and a dignified life.

Duque is now highlighting the importance of dialogue, compromise, and negotiation with the National Strike Committee (Comité Nacional del Paro). One should not forget, however, that at the beginning of the strike, he escalated the situation, deploying Colombia’s military, police force, and riot police (ESMAD) to various cities, where full force was necessary to re-establish public order.

Referring to those who protest as “terrorists,” “criminals,” or “vandals” (terms with multiple and fraught historical connotations) has helped the government and some Colombians to delegitimize the movement, framing reported attacks on private property, buses, bus stations, banks, government buildings, looting, and road blockages as irrational and violent acts. Official discourses advocate for a sanitized version of social protest, one that erases the fact that violence has historically played an integral role in the development of most movements for social and political change.

Armed with these narratives, we pick and choose which forms of social struggle are acceptable and which are not. In the state’s attempt to re-establish public order, and in the Manichean narratives of “good” versus “evil,” “right” versus “wrong”, the excessive use of public force is authorized, allowed, and justified. Are we willing to accept the hierarchization of life, whereby some lives are seen as worth more than others?

Since April 28, Colombians and some members of the international community have witnessed killings, injuries, disappearances, threats, fear, and arbitrary detentions, perpetrated by police officers in uniform and in civilian dress, members of the ESMAD, and armed citizens who have attacked protesters, among them members of the CRIC (Concejo Regional Indígena del Cauca) or La Minga in Cali.

These barbaric acts make it difficult to hide the fact that the government’s response has been both excessive and disproportionate. That the way that it has chosen, along with most national mainstream media outlets to frame the protests, has turned protesters into targets of state and civilian violence.

As of May 11, Indepaz (Instituto de estudios para el desarollo y la paz) and the NGO Temblores have reported at least 1,956 cases of state violence, 49 homicides (40 of which have involved state agents), over 1,000 arbitrary detentions, 550 individuals disappeared, and 12 reported cases of sexual assault.

At the heart of our reflection lies an ethical question. If violence should not be used by protesters to demand justice, why should it be used to guarantee public order? As a society, we are dangerously close to falling into an ethical precipice.

We have naturalized forms of violence that we do not see or recognize as such. Poverty and repression are right in front of us yet we fail to collectively act. There is state absence and neglect in areas where communities are still waiting for schools and health centers to be built. We witness censorship and indifference towards the suffering of Indigenous, peasant and Afro-Colombian communities. If the right to life, health, education, work, well-being, and equity are not guaranteed, then these are not rights, these are privileges.

Until we all access these basic rights, la protesta y la lucha no deben de parar.

Hanni Jalil is from Cali, Colombia, she is Assistant Professor of Latin American History at the California State University Channel Islands. Twitter: @JalilHanni

María Molinares-Torres is a lawyer, feminist, and researcher from Barranquilla, Colombia. Twitter @Mfmolinares1