The Nicaraguan Opposition, a House Divided 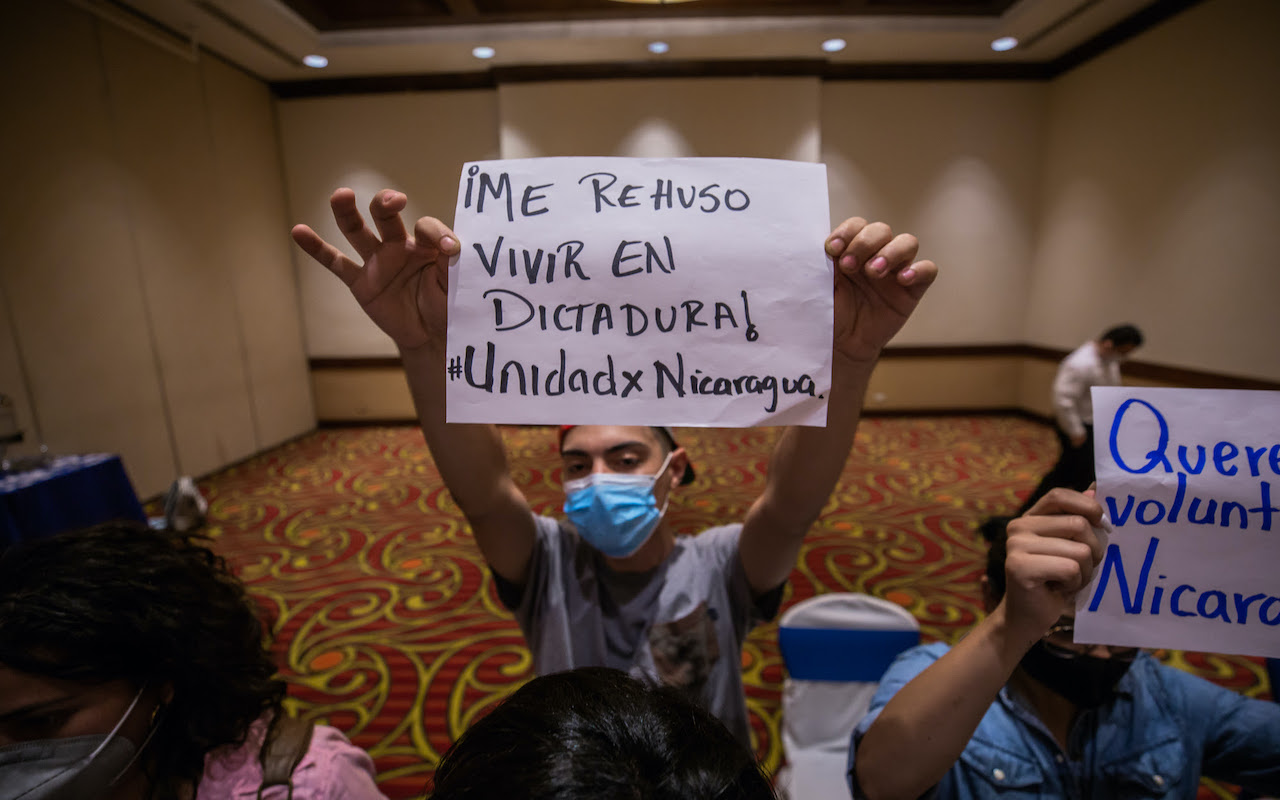 “I refuse to live in a dictatorship! #Unity4Nicaragua” (Photo: Carlos Herrera/Redacción Abierta)

Under the new rules, the two leading opposition movements had until midnight Wednesday to determine whether they consolidate into one unified coalition, thus proposing only one candidate to face off with Daniel Ortega on November 7.

With that threat hanging over their heads and tensions running high, the political parties within Alianza Ciudadana and the Blue and White National Coalition failed to submit paperwork to the Supreme Electoral Council on Wednesday for a joint ticket.

A divided opposition at the ballot box, independent analysts widely believe, will pave the way for Ortega to secure his fourth consecutive five-year term. Even if presidential candidates later bow out during the general election to support another party’s candidate, the risk of a fractured vote will remain.

Both coalitions are informal umbrella groups of civil society organizations, business groups, and political parties. Citizens for Liberty (CxL) is the leading political party within Alianza Ciudadana, which is also the political home for prominent names from the Nicaraguan Council of Private Enterprise (COSEP). The Democratic Restoration Party (PRD) is the main political arm of the National Coalition, which also contains civil society, victims’ family associations, and student groups which rose to national prominence from the past three years of protest movements.

The rifts between the coalitions aren’t only over who would be the one candidate, a final decision which would be made on July 28. Each side distrusts the other’s legal team, and disagrees on the proportional representation of legislative deputies within the opposition, religious matters, and sexual and gender diversity, reports start-up independent outlet Divergentes.

“There are very few hours remaining. It makes no sense that legal representation would get in the way of an agreement,” tweeted Juan Sebastián Chamorro, the presidential hopeful representing Alianza Ciudadana, on Wednesday morning.

Felix Maradiaga, one of the National Coalition’s leading primary candidates, alleged minutes later that his coalition had “already conceded practically EVERYTHING,” including the eventual presidential election candidate and proportional representation in the legislature.

“We waited for them until past one o’clock today and they never showed,” said Kitty Monterrey, president of the Citizens for Liberty party within the Alianza Ciudadana, in reference to negotiations with the Blue and White National Coalition. “When they didn’t show, we thought there was no goodwill because we said today that we accepted all of their conditions with the goal of achieving unity,” she claimed.

According to José Adán Aguerri, former president of the Nicaraguan Council of Private Enterprise (COSEP) and a leading voice within Alianza Ciudadana, the coalition fears that the joint legal team would swap out names of Alianza deputies submitted by July 28. “Despite what some may think, today isn’t D-Day. It all comes together on July 28. It’s an open process. Whether or not an electoral alliance is formed today, our doors remain open,” he continued, implying that the Alianza sees itself as the faction behind which the opposition should align itself in the coming months.

Even a unified opposition, though, could face other legal challenges under the new election reforms imposed by the Ortega-controlled Congress—particularly a prohibition of candidates tied to “terrorist acts of 2018.” This language appears to explicitly single out members of the opposition —including student leaders— who,  in April of 2018, staged mass protests against the Ortega-Murillo government’s pension overhaul requiring increased citizen contributions.

The regime then brutally cracked down on the protestors, firing live rounds and initiating months of arrests of political dissidents. Over the course of the ensuing months, over 300 protestors died at the hands of government agents. In the past three years, up to 80,000 Nicaraguans have fled to Costa Rica alone, according to the U.N. High Commissioner for Refugees. To this day, at least 125 political prisoners remain behind bars resulting from the protests.

As negotiations trudged on in the hours before the deadline, family members of political prisoners appeared at the site of Alianza Ciudadana’s negotiations Wednesday to demand a unified opposition ballot, as well as a “clean, just, transparent electoral process,” freelance journalist Wilfredo Miranda reported.

“Nicaragua is set to have the worst elections possible,” opined Luis Almagro, secretary-general of the Organization of American States, Wednesday morning. “The country is still immersed in a grave human rights and political crisis,” said during an OAS General Assembly meeting Wednesday to discuss the longstanding Nicaraguan democratic crisis.

Last week the OAS issued a statement expressing its “extreme concern” over the election of the Ortega-sympathetic magistrates to the Supreme Electoral Council (CSE), as well as the unilateral approval of the electoral reforms. According to Almagro, the moves “clearly give the official party an absolute advantage” in this November’s elections.”

Likewise, the European Union issued a statement: “They constitute another step away from an inclusive, democratic and peaceful solution to the ongoing political crisis in Nicaragua.”

El Faro English is a project from the award-winning Central American media outlet, El Faro, which focuses on hard-hitting investigations, culture, and analysis from Central America and beyond. In addition to translating reporting from El Faro, we publish original investigations and opinion articles and translate stories from partner media outlets throughout the region about migration, politics, culture, historical memory, violence and more from Central American communities in the region, Mexico, Europe, and the United States. Twitter: @elfaroenglish. To subscribe to El Faro English’s letter, subscribe here.