Why the Latinx Community Should Show Up for RUTHERFORD FALLS 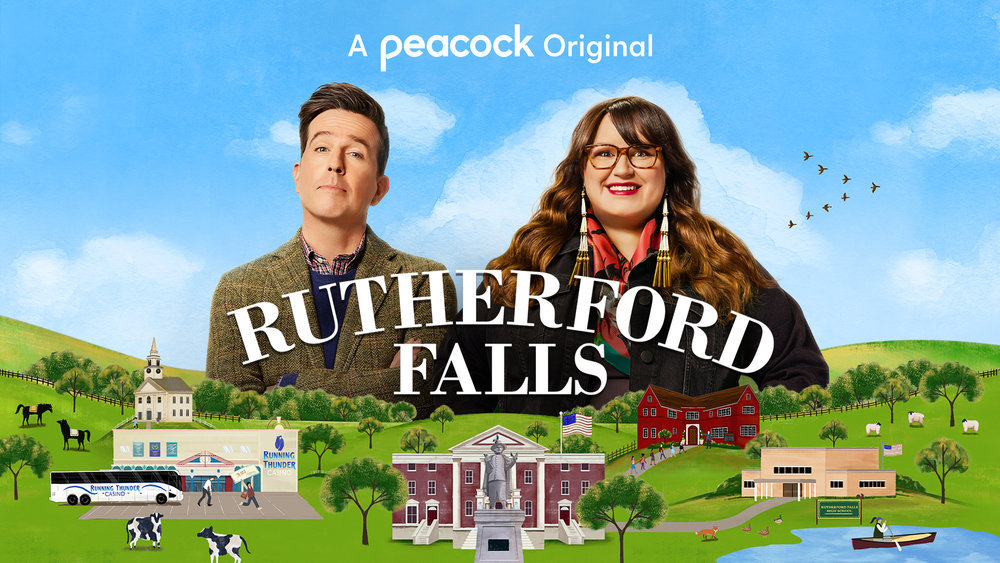 Many Latinx people, myself included, identify as mixed—colonialism may have stripped us of many of our ancestral ways but we still want to honor our Indigenous roots. That said, if we don’t show up for actual Indigenous people, the whole mestizo identity is just white supremacy in a rebozo.

So yes, we need to support Native people’s rights and culture. To do so, we need to recognize what it means to be Indigenous today. Enter Rutherford Falls, a new comedy on NBC’s Peacock. It’s created by Sierra Teller Ornelas, who’s Navajo and Mexican-American and who put together a charming, insightful show about the modern Native experience with a team of Indigenous writers and cast members.

Rutherford Falls is basically a buddy comedy between clueless white guy Nathan Rutherford, (played by Ed Helms) and adrift Indigenous woman Reagan Wells (played by Jana Schmieding). The conflict could be described as about the identity of their town —specifically moving a historical statue— but really it’s about Nathan and Reagan figuring out who they are. With this setup, Rutherford Falls explores race, U.S. identity, and the modern Indigenous experience and it does so very well (and I watch a lot of shows that try to tackle these issues and aren’t half as thoughtful).

First of all, there are no villains or people who just “get it.” There are just imperfect folks trying their best. Nathan, as our well-meaning white man, says stuff like “I always thought life was pretty fair” or “Things just work out,” and Reagan sort of squints at him and asks, “Does it?” Because it’s not her job to educate him. Rutherford Falls is clear Nathan has to figure it out for himself, by himself, and Reagan will not be his learning device, as happens all too often in Hollywood scripts. Instead, the show pushes him to learn and reckon with the unfair advantages he’s gotten by virtue of his identity while keeping the focus on his choices rather than the accident of his birth.

For her part, Reagan also has to figure out who she is, even if her path looks very different than Nathan’s. She’s running the cultural museum for the (fictional) Minishonka Tribe but lacks both strong ties to her community (everyone’s mad at her for never making amends after leaving a local boy at the altar years ago) and a strong sense of herself (why does she always put her needs second to Nathan’s?) She learns both in the community, thanks to the CEO of the Minishonka’s casino, Terry Thomas. Played by a fantastic Michael Greyeyes, Terry boldly advocates for his community in white and Indigenous spaces, building Reagan’s and the tribe’s leadership along the way.

This difference in modes, the individualistic versus the collective, dramatizes differences in culture without valuing one over the other. It’s clever and Rutherford Falls doesn’t stop there. It features a gender-fluid character but never remarks on it. The same goes for leading-lady Reagan’s size—she gets a handsome romantic love interest and a complex, whole character and no one ever has to say anything about her weight. This lack of commentary normalizes these identities without erasing them. And it’s not the show’s only tactic. On the opposite side of the spectrum, there’s a running gag about the town’s first Black mayor always pointing out her barrier-breaking status, but the critique is gentle and the compassion for her is fierce.

You see Rutherford Falls isn’t interested in villainizing white people for their ancestor’s actions or casting people of color as saints or martyrs. Instead, its aim appears to be showing how we can each help build a more just world. The answers are complicated and the actions, sometimes painful, but they exist.

And in its very existence, Rutherford Falls helps to counteract one of our society’s most damaging narratives—the one that says Indigenous people are gone or eradicated, part of the past and not the present. So if your imagination goes to conquistadors and Thanksgiving when you think of “Indians,” know it is not because of fact but rather fiction. And start consuming better fiction—in Rutherford Falls, the Minishokan characters are modern people with modern problems, part of a proud and ancient people. We need more shows like it and we needed them yesterday.

So help make it happen, show up for Indigenous creators like Sierra Teller Ornelas. Watch Rutherford Falls because it is the least you can do, because it is good, and because you will learn something.