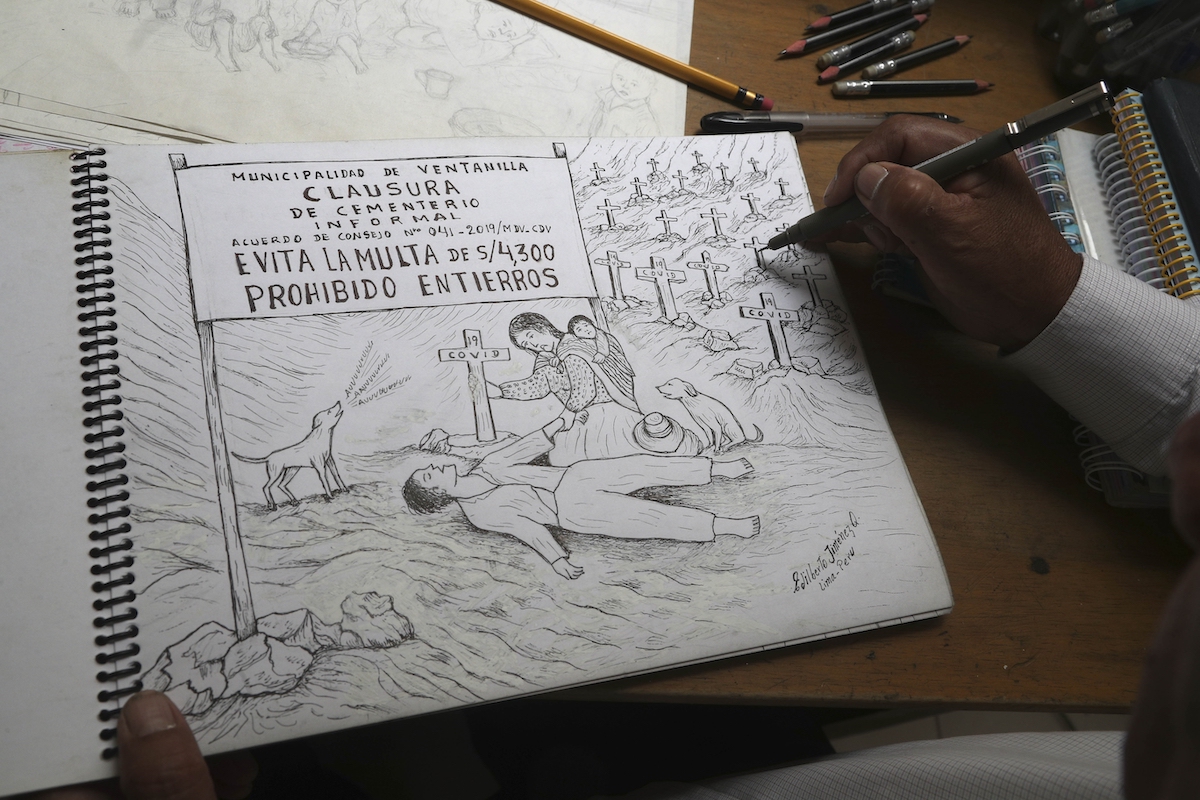 Edilberto Jiménez draws at his home in San Juan de Lurigancho, on the outskirts of Lima, Peru, Thursday, May 20, 2021. (AP Photo/Martin Mejia)

LIMA, Peru (AP) — With a pencil and a notebook, artist Edilberto Jiménez walks the streets of Lima and cities in the Andes mountains collecting stories and images about the coronavirus health crisis that has devastated Peru.

Later, in his workshop, he completes the scenes while reading newspapers or watching television news about the pandemic that has killed tens of thousands of people in his South American homeland.

“It’s like a war with an invisible enemy,” Jiménez says of COVID-19.

“Each drawing tells a story that had an impact on me,” says the artist, who drew 750 sketches and selected 100 of them for a book called “New Coronavirus and Good Government.”

His title plays off that of another boo—“New Chronicle and Good Government,” a 1615 work by Felipe Guamán Poma de Ayala containing 400 drawings and 1,200 pages recounting the suffering of Indigenous peoples at the hands of the Spaniards.

The 56-year-old artist in 2005 published another book of drawings and testimonies of the survivors of the internal war between Shining Path rebels and Peruvian security forces in Oreja de Perro, an area in Ayacucho province at the heart of a conflict that killed almost 70,000 people.

“There are similarities between the armed conflict and this pandemic,” says Jiménez, who between 1980 and 2000 lived in Ayacucho.

The first drawing in his latest book shows the reaction of members of a working-class Peruvian family as they stare in shock at the television during the announcement of the start of the state of emergency and mandatory lockdown to prevent the spread of the coronavirus. The shutdown lasted 106 days. 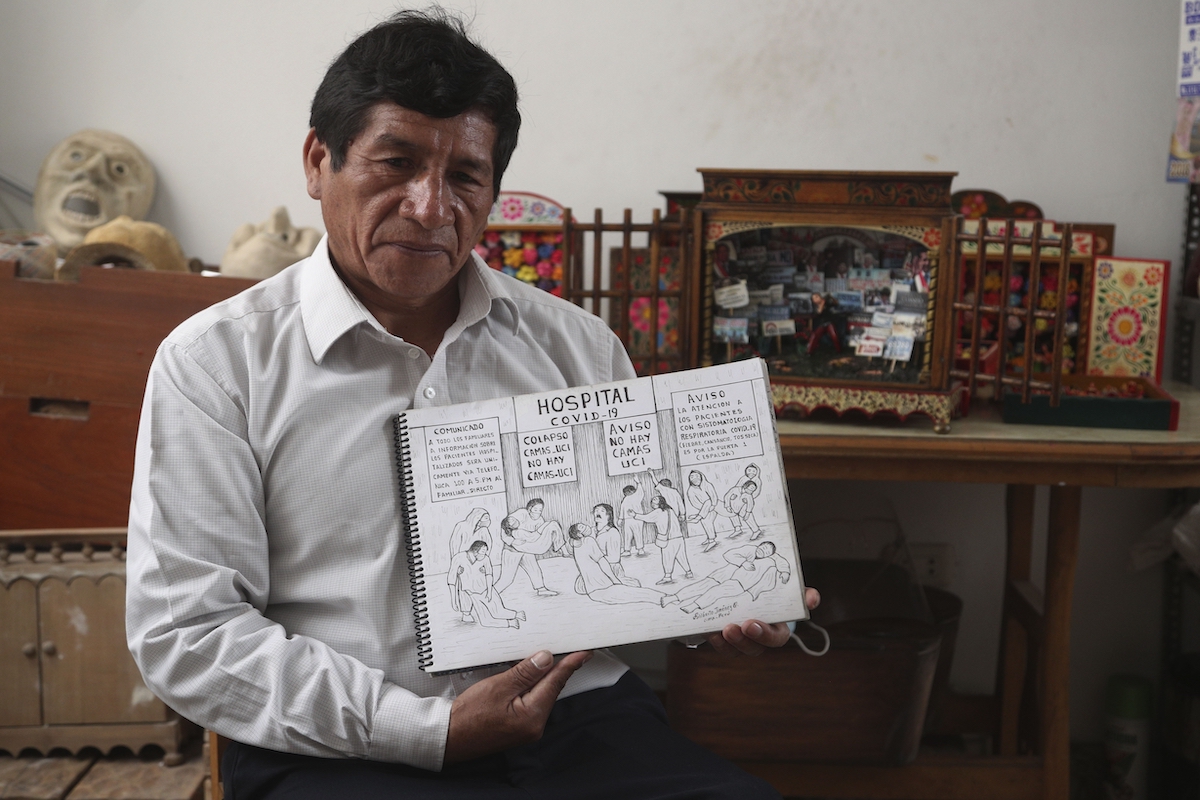 Edilberto Jimenez poses with one of his drawings at his home in San Juan de Lurigancho, on the outskirts of Lima, Peru, Thursday, May 20, 2021. (AP Photo/Martin Mejia)

Jiménez found scenes to drawn near his home. One morning, when he was returning from the market, he saw an old man fall to the ground and not get back up. People walked away from the man, saying he was infected.

“Only stray dogs came near him, and a few pigeons,” the artist recalls.

Jiménez, who is also an anthropologist, says that when he saw the man lying on the ground and the fearful witnesses, it reminded him of what he saw almost four decades ago when a man fell in the streets of Ayacucho during the political violence.

His drawing of the pandemic scene shows the man collapsed on the ground, surrounded by hundreds of the dead who try to take him away while two barking stray dogs try to defend him.

Other drawings show people dying in front of a hospital door, police chasing away street vendors with sticks, the unemployed or a family watching their father die because of a lack of oxygen.

He said he also collected stories by watching television or reading news stories, including a May 20, 2020, Associated Press story from Lima about corpses and a gardener who hanged himself after learning he had contracted the virus.

Jiménez’s characters show “the cruel injustice of Peruvian life,” says Víctor Vich, a professor of cultural studies at the Pontifical Catholic University of Peru who wrote the prologue for the artist’s book.

The pandemic has caused Peru’s intensive care units to almost collapse and the exact death toll from the coronavirus is still under debate. As of Monday, the number of confirmed deaths stood at 66,770, while the total including suspected COVID-19 deaths at 173,374, according to official data.

Jiménez says he has seen two types of pandemics in Peru: one for the poor and another for those with money.

“We live in complete inequality,” he adds.