The Crisis Continues in Brazil 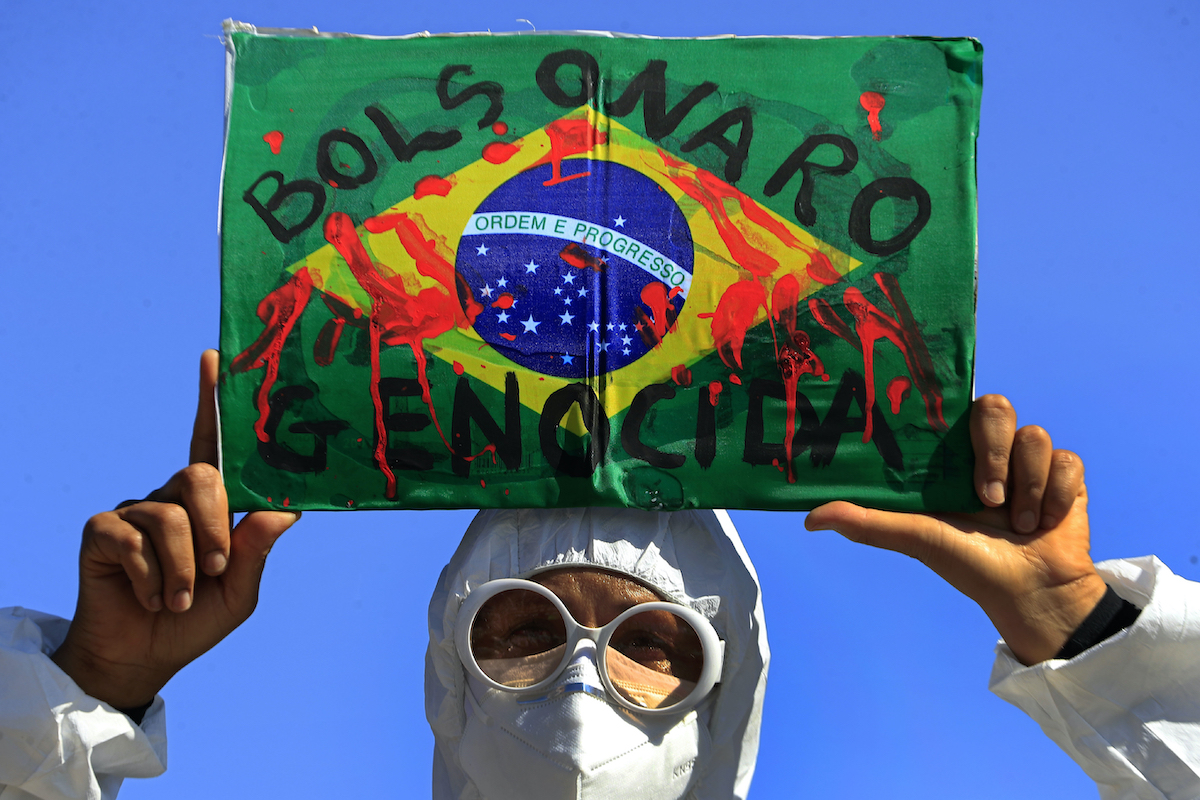 A demonstrator holds an image of the Brazilian flag covered in fake blood and the Portuguese phrase “Bolsonaro Genocide” during an anti-government protest by unions against President Jair Bolsonaro’s policies to fight the COVID-19 pandemic in Brasilia, Brazil, Wednesday, May 26, 2021. (AP Photo/Eraldo Peres)

May was a complicated month for Brazil and Brazilians. It was one more month in an endless series of catastrophes and governmental irresponsibility. Jair Bolsonaro’s handling of the pandemic, and an investigation into it, have attracted most of Brazilians attention this month—as it has been for some time.

The exponential increase in the number of deaths by COVID-19 led to an investigation into the causes of such an immense death toll, resulting in panic from government supporters who nevertheless decided to show strength in the streets in a parade echoing memories of fascism.

In addition, a massacre inaugurated the month, the deadliest police operation in Brazil’s history, almost foreshadowing what was to follow.

In April, Brazil reached a peak in daily deaths due to the pandemic, surpassing 4,000, and becoming the world epicenter of the pandemic (until it was overtaken by India). In May, daily deaths fell to 2,000 a day, but experts fear the harbinger of a third deadly wave of the disease.

And all this while Bolsonaro’s far-right government is being investigated negligence and incompetence, in additon to an ideological program of scientific denialism and encouragement of unscientific methods for treating COVID-19.

Interviewing members and former members of the government —such as former health ministers and the former foreign minister, as well as health experts and the president of Pfizer in Latin America— the parliamentarians are seeking to understand why Brazil has surpassed 450,000 deaths and who should be held responsible for the delay in production and delivery of vaccines. They are also investigating the manufacturing of crises with allied countries, such as China, that hindered the arrival of inputs for the local production of new vaccines.

The government is accused of creating artificial friction with China, refusing to sign agreements to purchase vaccines with major laboratories and promoting methods without scientific proof. There are also questions anput the government’s response to the pandemic that actively contributing to the death of thousands of people, with the president promoting crowds and refusing to wear masks at various times.

But at least in terms of good news, the Butantan Institute —which is already producing doses of the Chinese Coronavac vaccine— has been given the green light to start the human-phase testing of its COVID serum. This serum is expected to help patients already infected to avoid the development of a serious condition.

On May 8, a “secret budget” from the government was discovered after a thorough investigation by the newspaper O Estado de São Paulo. It was a scheme that allocated 3 billion reais of public funds to allies in congress as a way to buy support from legislative members. While there is a shortage of life-saving drugs for people infected with COVID and funds to ensure emergency relief for people who have lost their jobs, the government has secretly decided to divert money to buy political support.

Opinion polls show that support for the president has fallen. But he still maintains a base of 24% of the electorate and, according to a recent report in the newspaper Valor Economico, there is a direct relationship between coronavirus transmission and places where the president had the most votes in the 2018 election.

The president, who has already called the pandemic a “little flu,” constantly parades without a mask and promotes science denialism. On Sunday, May 23 he promoted an event with thousands of people in support of his government that paraded through the streets of Rio de Janeiro.

In a city where 84% of the ICUs were occupied and almost 50,000 deaths had occurred to that date, a maskless president rode his motorbike for 60 kilometers, crossing several Rio neighborhoods for a parade that included between 10 and 15 thousand people. The images of the president parading on a motorbike have been compared with those of the Italian fascist dictator Benito Mussolini, who in 1933 also paraded on a motorbike with his supporters.

To David Nemer, assistant professor of communication at the University of Virginia, “There is a traditional relationship between bikers, libertarianism and nationalism in the U.S., a relationship that has been exported to Brazil.”

That helps explain why Bolsonaro decided, while pressured, to seek help from bikers.

“The profile of bikers in the U.S. carries as much rebellion as a validation of masculinity. The idea of the man seeking his freedom on the ‘highways of America,’ where no one, least of all the state, can touch him or tell him what to do. Hence, their attraction and support for people like Bolsonaro. He who speaks his mind. The motorcycle can indeed be seen as an ‘enhancer’ of an insecure masculinity. This relationship exported by the U.S. was not only adopted by Brazilian nationalists, but also by Mussolini, Putin, Trump and others,” Nemer said.

During the parade, a journalist from CNN Brasil (a news channel that cannot even be accused of opposing the president) was harassed and removed from near the demonstrators and was escorted by police, before running the risk of being assaulted along with his team. The media is constantly under attack from Bolsonaro’s supporters, who accuse them of undermining the president and manipulating his words and ideas.

This show of force, however, masks a certain sense of panic. The parliamentary investigation into Bolsonaro’s government seems to have pushed his supporters on the defensive. On one side, the president seeks to demonstrate strength with a large protest in the streets. On the other, supporters have begun deleting thousands of videos from their YouTube channels for fear of being investigated and even arrested for advocating “early treatment” for COVID-19.

Hundreds, potentially thousands of videos have disappeared from channels of the president’s supporters. Some of the channels have millions of followers. This is not the first time the phenomenon has happened, but it demonstrates once again that when the authorities start seriously investigating the Bolsonaro government and its supporters, fear ensues.

Tired of seeing their friends and relatives die due to government negligence in the face of an unprecedented crisis, tens of thousands of people took to the streets on Saturday in more than 200 cities, demanding Bolsonaro’s impeachment. These were the largest protests this year, perhaps since the pandemic began, showing that finally, the patience of the population is coming to an end, which may bring necessary changes.

One response to “The Crisis Continues in Brazil”