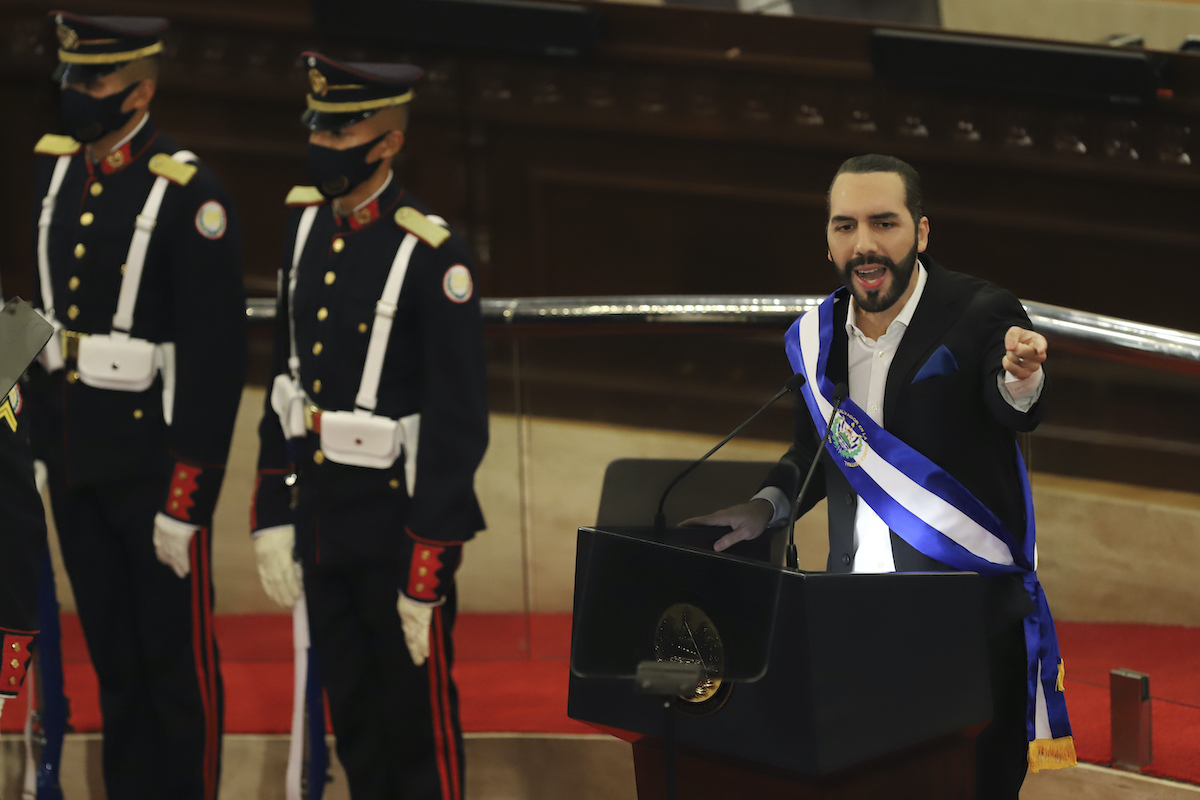 That was the oath —“to wage this new battle together”—  lawmakers swore on Tuesday, with nearly everyone in the vast hall repeating the pledge after the president, line for line, at the end of his second annual state of the nation address. Bukele invited Salvadorans at home and in the diaspora to rise and raise their hands as well.

El Faro confirmed that both the Chief of the General Staff of the Armed Forces and the High Command of the National Civil Police also stood for the oath and pledged their loyalty to the president.

“For the first time in 200 years, the oligarchy lost its last chance to maintain formal power,” Bukele said, insinuating, as he has before, that the FMLN, which transitioned from guerrilla movement to political party following the 1993 Peace Accords, is an oligarchical force.

“We’ll have to make decisions that not everyone will agree with. It’s our right, even though it might upset some.” Two centuries after the end of colonial rule, the administration argues that the new legislature, in which Nuevas Ideas holds a supermajority, will help Bukele “refound” the nation.

International critics who condemned the May 1 removals of the Supreme Court magistrates and attorney general —among them, the European Union— answer to monied interests, Bukele argued in his address. “Some in the international community don’t get it. For them, it’s weird to see a government which doesn’t represent any de facto power.”

Notably unmarked by criticism in Bukele’s speech was the United States. That same day, former ambassador Jean Manes returned to the Embassy, as the top interim official, to mend the State Department’s fraught relationship with Bukele. Shortly after getting off the plane, Manes placed a condition on working to improve relations: “At the center of that closer relationship with the United States is support for good governance, reflected in the rule of law, separation of powers, independent and free press, a robust civil society, and a reliable justice system committed to fighting corruption.”

During the speech, the press was cordoned off to a section on the second-floor balcony and barred from coming down to the Assembly floor afterwards. The new Legislative Assembly communications team —which, since starting work at the end of April, bears Bukele’s branding and messaging— also required that reporters submit their credentials in advance and passed them to Casa Presidencial for vetting.

That same day in Costa Rica, Secretary of State Antony Blinken asserted that Central America is an example to the world of “backsliding” on democratic norms—a trend which the department has consistently labeled as a driver of migration to the United States alongside insecurity, poverty, and government corruption.

Costa Rica was Blinken’s first trip to Latin America, and he met with Costa Rican president Carlos Alvarado, his most prominent emerging partner in the region, as well as top diplomats from Central America and Mexico.

In neighboring Nicaragua, meanwhile, the police raided the home of opposition presidential contender Cristiana Chamorro on Wednesday, placing her under house arrest and denying press access to her home. The Sandinista regime has mounted a money laundering case against her and the transparency and human rights organization she used to run, the Violeta Barrios de Chamorro Foundation. Find our last newsletter below for more context.

“The brashness of two Central American governments during Secretary Blinken’s visit, one promising to prevent the opposition’s return to power and the other barring a presidential candidate from the race, confirms just how complex Joe Biden’s regional agenda will be,” wrote Laura Chinchilla, president of Costa Rica from 2010-14, the day Chamorro was placed under house arrest.

Biden’s State Department is asking Congress to approve security funding increases in next year’s budget to Central American governments for which the State Department itself, this March, cited reports of arbitrary imprisonment, forced disappearances, torture, and extrajudicial killings.

The State Department is hoping to cut a $220 million check to a regional anti-narcotics program that received no money in its last budget. Whereas in past budgets the department largely wrote checks to the militaries and police forces of individual countries, it will now look to route most funding to regional militaries and police through a Central American, rather than country-specific, initiative.

The department is also looking to double regional direct military aid from $16 to $32 million and to send $2 million in new funding to regional counter-terrorism operations. The only country in the isthmus to receive no State Department security force funding, as in years past, is Nicaragua.

“One critical component, of course, is dealing with security challenges that we face, including the question of transnational organized crime, the drugs and the interdiction efforts that are necessary to deal with that, cooperation on terrorism, et cetera,” Blinken said during the press conference in Costa Rica, when pressed on the aid increases. Blinken will defend the department’s proposed budget before the Senate Foreign Relations Committee on June 8.

The new budget also proposes dramatically cutting direct military aid to Mexico from $6.8 to $1.6 million. Last fall, the D.E.A. accused former Defense Minister Salvador Cienfuegos of drug trafficking and corruption before, under pressure from Mexico, U.S. authorities released him. Mexican authorities exonerated him in January, but Cienfuegos’ October arrest in Los Angeles remains a sore spot in relations with the López Obrador administration.

If you’ve gained from our work, please share. And consider, for the price of a coffee a month, supporting independent journalism in Central America at support.elfaro.net.