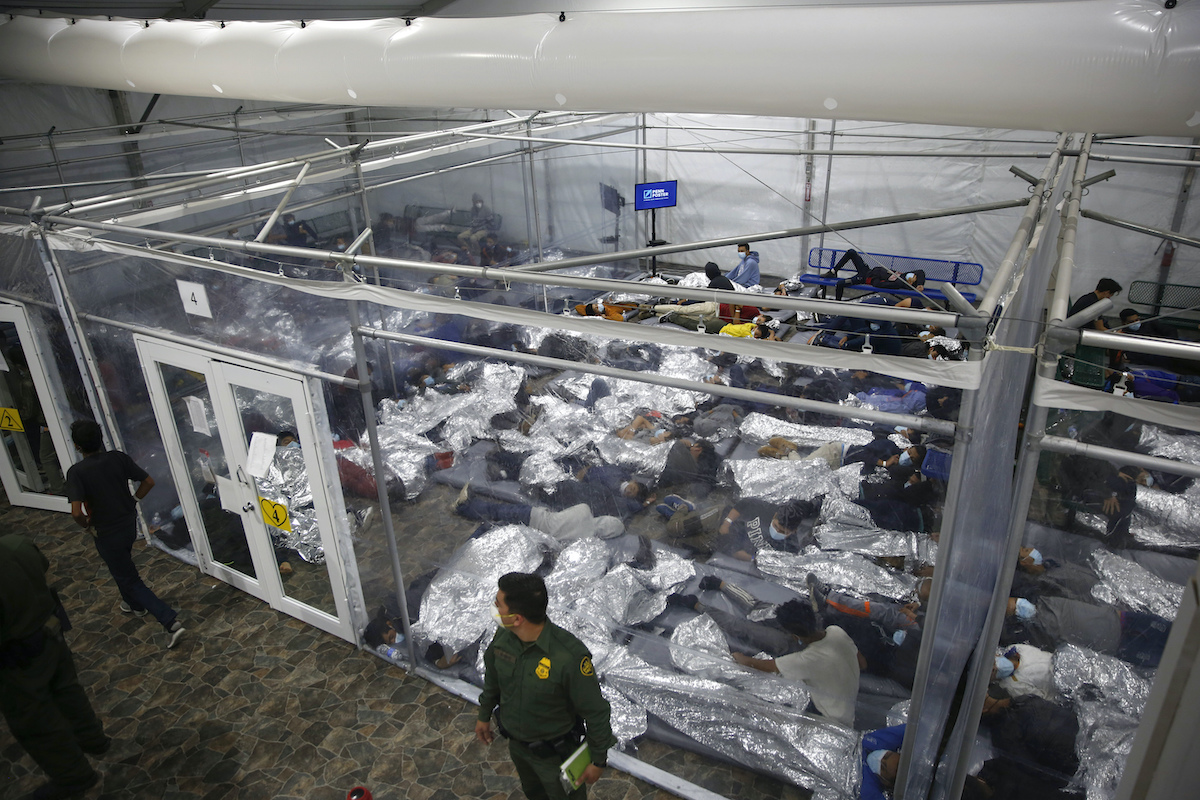 FILE – In this March 30, 2021, file photo, minors are shown inside a pod at the Donna Department of Homeland Security holding facility, the main detention center for unaccompanied children in the Rio Grande Valley run by U.S. Customs and Border Protection (CBP), in Donna, Texas. (AP Photo/Dario Lopez-Mills, Pool,File)

Paramedics were called regularly to treat children suffering from panic attacks so severe their hands would constrict into balls and their bodies would shake. The outbursts often occurred after other children were taken away to be reunited with families, dashing the hopes of those left behind at the largest emergency shelter set up by the Biden administration to hold minors who had crossed the U.S.-Mexico border alone.

The conditions described by a federal volunteer who spent two weeks in May at the shelter at Fort Bliss Army Base in El Paso, Texas, highlight the desperation and stress of thousands of children held at unlicensed facilities, waiting to reunite with relatives.

Some had marks on their arms indicating self-harm, and federal volunteers were ordered to keep out scissors, pencils or even toothbrushes that could be used as a weapon. While girls made origami and braided friendship bracelets, a large number of the children spent the day sleeping, the volunteer said. Some had been there nearly two months.

The volunteer spoke on condition of anonymity because she was not authorized to talk publicly about what she witnessed on the base from May 12 to May 25. She said she was compelled to speak out because of the despair she observed. Much of what she described mirrored what advocates who visited the shelter recently recounted to The Associated Press and what children there told them.

The conditions raise concerns about why it is taking more than a month on average to release the children when most have family in the United States. More staffing has been added since the emergency shelters were opened this spring amid an unprecedented arrival of migrant children, and the flows have subsided.

“I think there is a general consensus that no child should be in these emergency shelters for more than two weeks,” said Aaron Reichlin-Melnick, policy counsel for the advocacy group American Immigration Council.

Lawyers and advocates question why most of the children are at unlicensed shelters.

Advocates say the government should be pouring more resources into the safe release of children, and those without relatives or a family friend, known as a sponsor, should be immediately going to licensed facilities that are required to have a care worker for every eight children during the day and a mental health clinician per every 12 children.

The volunteer was one of more than 700 at the time, when Fort Bliss housed more than 4,600 children in giant, air-conditioned military tents filled with cot-style bunkbeds. The number of children there is now down by nearly half, at fewer than 2,500.

The volunteer said she met children who had been there 54 days. She saw bubbly girls grow angry and quiet and sleep so much they had to be woken to eat.

Several had panic attacks after seeing friends leave to join their families. One day, ambulances were called four times, the volunteer said.

“Paramedics would come into the tent and take them away on a stretcher because their hands would constrict up, their heads would sometimes go to one side, and their limbs would shake and it was obvious that it was very uncontrolled,” she said.

The children could call their families twice a week.

An official from the Department of Health and Human Services did not comment specifically on the allegations regarding first responders treating children suffering from panic attacks and other concerns about the minors’ safety but said the administration was working on expanding indoor recreation space, mental health support, wellness activities and educational services. The official said mental health services and counseling are available to everyone at the emergency facilities.

The record arrivals of migrant children have tested the Biden administration, with the U.S. government picking up nearly 60,000 children traveling without their parents across the Mexican border from February to May.

The government’s goal is to unite every child safely and swiftly with their parents or sponsors, but it takes time to do the extensive screening that includes interviews, background checks and sometimes home visits, the government official said.

The administration has maintained it followed best practices when it opened 14 emergency intake sites this spring to respond quickly to overcrowding at Customs and Border Protection facilities and said improvements are being made constantly.

They include the addition of virtual case managers to assist staff on the ground to expedite the release of children, and efforts to identify complicated cases or children without relatives or sponsors to move them to licensed facilities.