‘I Carry You with Me’: A Gay Mexican Immigrant Love Story 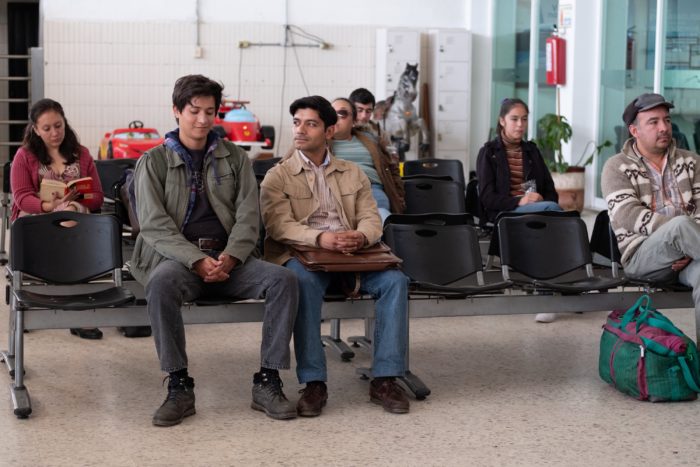 This review was originally published by MANO

By Alejandro A. Riera, Movies & TV Editor at MANO

A middle-aged man sits alone in a New York subway train. In a Spanish voice-over, he talks about waking up drenched in sweat from a dream in which his younger self flew back to Mexico, even though he can no longer return. We are then introduced to that younger self, Iván (Armando Espitia), in 1994, cleaning floors and bathrooms and fixing toilets at a restaurant in Puebla, even though he has a certificate from a culinary institute. So far, a rather conventional opening.

But documentary filmmaker Heidi Ewing’s first fiction film, I Carry You with Me (Te llevo conmigo), is anything but your traditional miserabilist film about the Latin American immigrant experience. These first few minutes set the template for what her film is truly about: a reverie about memory and the people and places and things we leave behind as migrants, as well as the sacrifices made and the prejudices encountered at home and abroad. The script by Ewing and Alan Page Arriaga, based on the experiences of chef Iván García and his partner Gerardo Zabaleta, is deceitfully linear; its structure replicates the way memory works: how we remember things, and how we even picture ourselves in those memories.

Turned down once again by the restaurant owner after asking about a potential opening in the kitchen, Iván follows childhood friend Sandra’s (played by Mexican actress and stand-up comedian Michelle Rodríguez) advice to accompany her to an underground gay bar, where he meets Gerardo (Christian Vázquez), a teaching assistant at the university. Their hesitant flirting, their long conversations and their first kiss are captured by cinematographer Juan Pablo Ramírez in a mix of sensuous long shots and tight close-ups, as water drips around them inside that bar, and when they say their goodbyes as the sun rises. Their relationship is a tad tentative at first, in part because Iván has yet to fully come out and is afraid his ex-wife will keep him from seeing his son if she ever finds out. That push and pull between keeping his relationship a secret and his own professional dreams drive Iván to pack up his bags, leave everything behind and, alongside Sandra, make that perilous trek to the border. 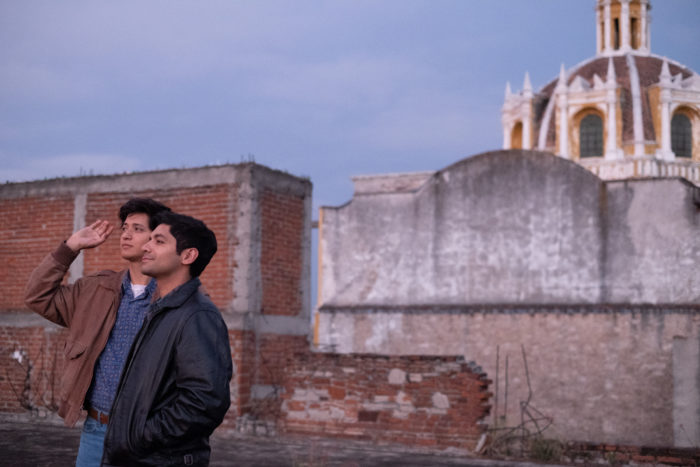 Iván may be our initial point of entry into this story, but this is Gerardo’s story as well, and Ewing tactfully weaves his tale with Iván’s, especially after the latter departs and finally makes it to New York. Gerardo is the victim of a brutal homophobic attack on the streets of Puebla. As Iván toils in New York, Gerardo makes the unavoidable decision to cross the border himself and join Iván. Ewing folds back time, taking us to key moments in their respective childhoods: Iván preparing tamales with his mother and selling them with his father; Iván caught red-handed by his father wearing a quinceañera dress his mother made for a client; Gerardo’s father taking him late one night to the fields to beat him with a belt in hopes of making a man out of him and ending the townsfolks’ rumors about his son’s sexuality. The United States, for both, is not only a land of opportunity but one that allows them to be themselves, away from their country’s machismo and homophobia. And yet, there is a cost.

“That place destroys people with loneliness,” Gerardo warns Iván before he leaves. Even though New York hasn’t quite destroyed them—they are now both successful entrepreneurs—the country and its immigration policies certainly have. As the film introduces us to the real life Iván (the man we met at the beginning of the film) and Gerardo, both men are pondering whether they made the right decision in migrating. Because they are both undocumented, they haven’t been able to go back to Mexico: they cannot visit their friends and families, including Iván’s dying father. The U.S. government has denied Iván’s son (now twenty-something) a tourist visa countless times. Ewing shifts to full documentary mode in these scenes. The effect can be quite jarring at first. It feels like we are watching a completely different movie.

The project did start as a documentary in 2012, when Ewing first met both Iván and Gerardo; most of the footage in the film’s final third belongs to that first stage of the project. And yet, the verité style in which these scenes are filmed offers a vivid contrast to the more elegiac, tender tones of the scenes in Mexico—the harsh urban reality of the present versus the misty, almost-nostalgic tinge of their memories. That contrast drives home the emotional toll leaving everything behind has taken on the two men. Ewing prepares us for this jolt once Iván arrives in New York: the long lines outside a pay phone as immigrants wait their turn to call home; his grueling job as a bike delivery guy; the testosterone-fueled work in the kitchen, where four-letter words and dehumanizing insults can rob you of your humanity. These scenes have grit, portraying New York City (or, for that matter, any major American city) as still hostile to immigrants.

Winner of the Audience and Innovator Awards in the NEXT program at last year’s Sundance Film Festival, I Carry You with Me joins a growing number of films about the Mexican immigrant experience that include Fernando Frías de la Parra’s grossly overlooked I’m No Longer Here and Identifying Features (Sin señas particulares), Fernanda Valadez’s devastating portrait of a mother’s search for her teenage son who left for the border—my favorite film of the year so far.

Ewing may not be of the culture, but she is sensitive to the culture, depicting with empathy the reasons that drive people to make such life-changing decisions and the environment they come from. Her team may be binational, but the film’s spirit, the experiences it portrays, are 100-percent Mexican. Ewing’s hand and vision are guided not only by Iván’s and Gerardo’s stories, but by a cast and crew who clearly know or have come in contact with people like them. I Carry You With Me not only allows both men to courageously come out of the shadows, but it also gives voice to thousands of similar stories.

I Carry You With Me (Te llevo conmigo) opens in select theaters on July 2.

Born in Santurce, Puerto Rico, Alejandro A. Riera has been active in Latino media since 1988 when he and a group of 12 independent producers launched Orgullo Latino, a weekly newsmagazine series in the Chicago Access Network. Alejandro joined ¡Exito!, the Chicago Tribune’s Spanish-language weekly, as a freelance reporter in 1993, where he wrote about entertainment and culture with the occasional foray into politics. He was also a frequent contributor to the Chicago Tribune’s Tempo, Arts & Entertainment and Friday sections. Part of the transition team that replaced ¡Exito! with Hoy, and in 2004 he became Senior Editor for all three editions of Hoy (New York, Chicago and LA). He currently is a freelance writer, editor and media relations specialist in Chicago.