Mexican Rapper Audry Funk Sings for the Immigrants of NYC 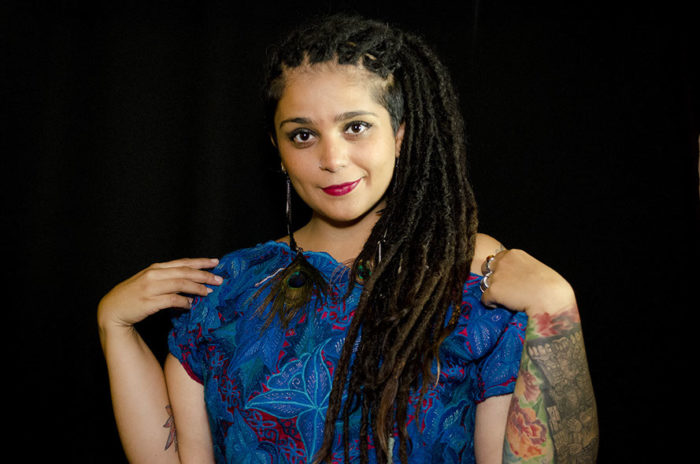 Audry Funk, 33, is the mix of rap, feminism, philosophy, and body positive messages. This independent artist from Puebla, Mexico is now releasing a song about the immigrant experience in the neighborhoods of New York City.

Born Audry Bustos Diaz, she began singing in a reggae group. Only when she began her career in philosophy did she start rapping. Her rap has always been laced with political messages.

“I feel very proud to be one of the first women in Puebla who rap,” Audry Funk tells Latino Rebels. “I am not the first, but I am one of the first. I was also a woman who always managed [hip-hop artists] in Puebla and Mexico, because later I also started to do collective work with women in the first multidisciplinary hip hop collective.”

Feminism and politics have always been in her repertoire, which includes songs such as “No me representas, about how men discuss women’s rights without bothering to include women in said discussions.

Audry came to New York eight years ago, thanks to an invitation from other artists, and then decided to stay. Since she arrived she has been in the Bronx and has lived the whole immigrant experience: migration, living in a new city, and being an artist in New York. She even works in a pharmacy now. All of her experiences gave her the authority to now sing to the neighborhood and to the latinidad of the city.

“I am a migrant woman in New York,” she says. “At some point I was undocumented. In other words, there are things you never stop being, even if you stop being it [technically speaking]. When you are a migrant, you are always a migrant. No, you don’t stop being one. I wanted to tell the world how I live and also how other people who also have the same experience as me are living.”

“Barrio y Diáspora” is a song made with Diego Cebollero and Jett Carter, and it honors the diversity of music and flavors found in the city’s neighborhoods. Audry Funk wrote its lyrics during the pandemic, one of the hardest times for her as an artist.

On her Instagram page, Audry shares her thoughts as a Latina, feminist, artist and, above all, as a fat woman who likes to talk about love and compassion towards her female followers.

“I always like to tell the girls who follow me that one of the biggest wars they have to win is the hatred that is implanted in them from a young age,” Audry tells Latino Rebels. “It’s terrible. Since always they tell you that, if you’re fat, you’re ugly. I mean, there is always the message that you are not enough. So for me it is very important that girls understand that love comes from themselves.”

Being an immigrant and independent artist is tough in New York City, but Audry Funk uses her developed independence to establish her art, which speaks out against violence and seeks to bring a message of unity, self-love, y la vida del barrio.

“I have my day-to-day work, like many artists,” she says. “So I don’t think it’s worthless or anything, only that the dream would be to be able to just be creative. But also, what we talk about with colleagues, as sometimes it is also good to live other things among the art to understand what you’re saying [through the art].”