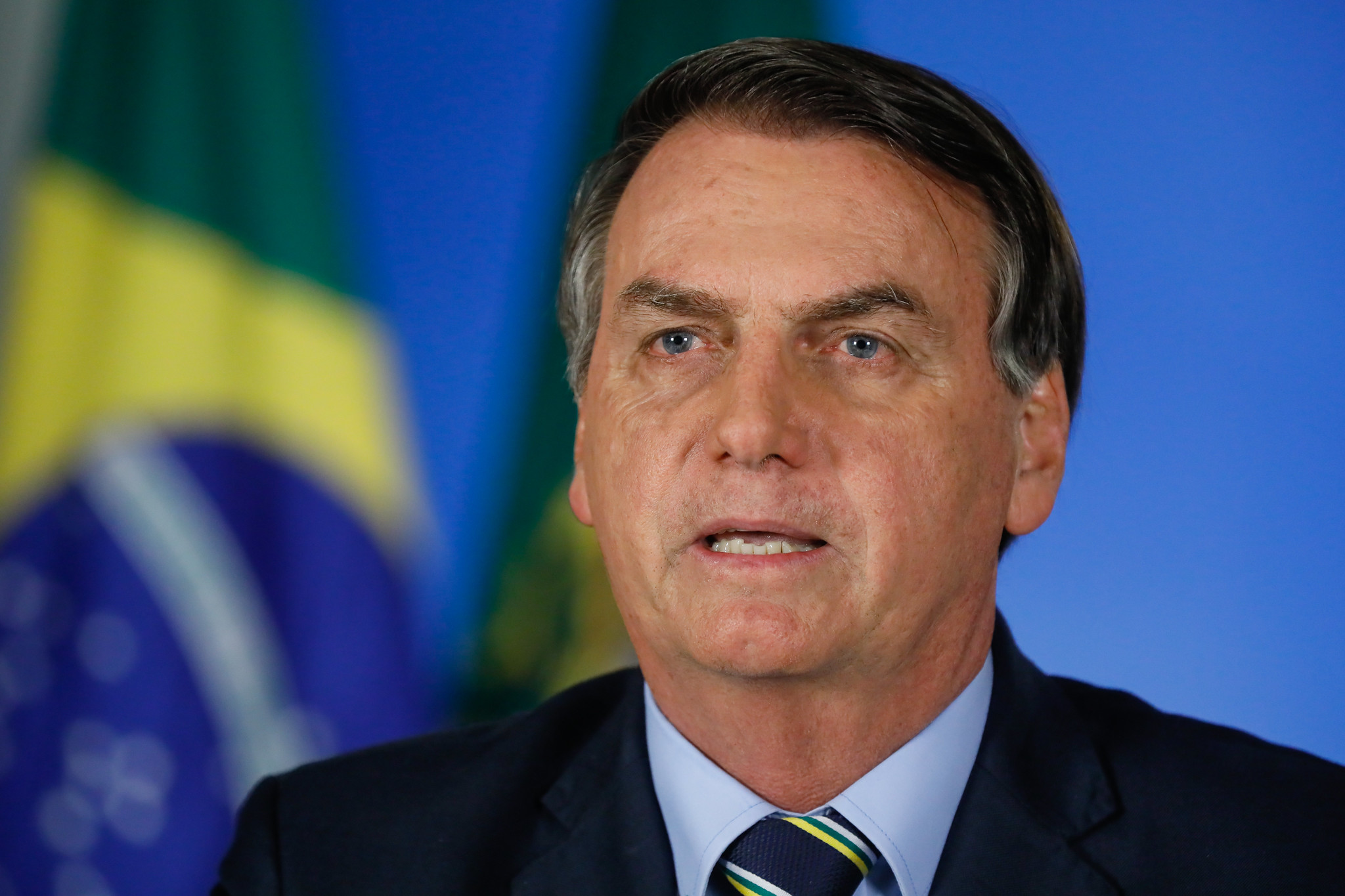 Brazil President Jair Bolsonaro gives a speech on March 24, 2020, on the National Radio and Television Network (Palácio do Planalto/CC BY 2.0)

On the day Brazil reached half a million dead, Saturday, June 19, thousands of people took to the streets across the country to demand Jair Bolsonaro’s impeachment. It was the second mass protest against the far-right president, but unlike the previous one, in May, this time the media ensured wide coverage of the protests–which were on the cover of the country’s main newspapers.

“The media gave extensive coverage to the new protests, pointing out that the demonstrators participated in the protests wearing masks and trying to maintain some social distance, despite some pockets of agglomeration,” said Eduardo Barbabela, a political scientist at the State University of Rio de Janeiro.

He also notes that the emphasis given by the media on the protective measures “is important to highlight the responsibility of the protests in a pandemic period and strengthen the credibility of the demonstrations with the population that heard from this same media that they should not leave home, much less gather.”

Commenting on what he saw at the protest in the city of Belo Horizonte, musician Makely Ka said he didn’t see “anyone without a mask.

“There were many party flags, some union trucks, groups of social movements, organized football fans, but also many families, people with national team jerseys and flags of Brazil. I also saw many indigenous people and mainly students. At the front, a platoon of cyclists. The atmosphere was peaceful, but there was an atmosphere of indignation.”

The latest protests come in the midst of the CONMEBOL Copa América, South America’s main football competition, which is being held in Brazil after Colombia and Argentina refused to host the event–the former because of the protests taking the country, the latter because of the pandemic.

Brazil’s far-right president thought it would be a good opportunity to follow up on his denialism and host the competition which, early on, saw a number of players and team staff members infected with COVID-19, plus a player’s protest that even threatened the Brazilian national team’s participation.

The backdrop was a crisis within the Brazilian Football Confederation, whose president, Rogério Caboclo, was ousted amid a sexual abuse investigation, and whose players risked exposure and contamination, especially if they played in Europe. The crisis, however, was resolved, and the competition, despite all the problems, was allowed to take place–despite not attracting the same ratings as before and the games not being shown on Rede Globo, the main TV channel in the country and  the traditional “home” of the Brazilian team.

The climate of revolt in the country is so great that even Anitta, perhaps one of the best known artists in Brazil today–her latest single is part of the soundtrack for the new Fast & Furious movie–decided to speak out. To her millions of followers, she tweeted: “500 thousand deaths… is about Bolsonaro Out, yes! In favor of democracy, economy, health, education, COLLECTIVE sense.”

Meanwhile, in the Brazilian Congress, the Parliamentary Commission of Inquiry (CPI) is still investigating the responsibility of the government in the death of more than 500 thousand Brazilians, and making jaw-dropping discoveries.

At the beginning of the month, the Center for Study and Research in Health Law, at the University of São Paulo, delivered to the CPI a 200-page document detailing all of Bolsonaro’s statements encouraging contamination, fake news, and sabotage of sanitary measures, further increasing the pressure on the government.

But the big bomb would drop a couple of weeks later.

On June 24, Environment Minister Ricardo Salles, criticised by environmentalists for promoting deforestation and environmental destruction, resigned from his post. Sources say he, a target of investigation by the Supreme Court for involvement in corruption, is in serious danger of being arrested after Supreme Court Justice Alexander de Moraes sent Salles’ phone to the U.S. to be unlocked, giving the Court access to its data.

And on the same day, a few hours later, the CPI revealed a corruption scheme involving millions of dollars in the purchase of Covaxin, a vaccine developed by India.

The accusation came from Luis Miranda, a congressman in President Bolsonaro’s political base, who allegedly received documents from his brother, a Ministry of Health employee, and passed them on to the President with the promise that he would take them to the Federal Police. Bolsonaro did nothing.

In fact, once the scandal reached the media, Bolsonaro sent the Minister of the General Secretariat of the Presidency to threaten the Congressman.

“Congressman Luis Miranda, God is watching. But you are not only going to deal with God, you are going to deal with us too,” said Minister Onyx Lorenzoni, which only increased suspicions that the government may actually be involved in the multi-million dollar vaccine scandal.

The main accusation is the high price paid for the Indian vaccine which, apart from anything else, had its purchase negotiated while it was still in testing phases and while the government insistently refused Pfizer’s attempts to sell vaccines to the country.

To Claudio Couto, coordinator of the Professional Master in Management and Public Policies at Getúlio Vargas Foundation, “it is not just an expensive vaccine, which could have been purchased despite the high price, in a scenario of scarcity. It is about a vaccine being reproved by Anvisa [Brazil’s sanitary surveillance agency], with an attempt to purchase it outside the contract, at an overpriced price and with the president’s silent knowledge.”

Bolsonaro, Couto adds, “not only omitted himself, but even cut off the communication channel with the whistleblower, Ricardo Miranda–demonstrating that he didn’t want to solve the problem.”

During the hearings of the Parliamentary Inquiry, the whistleblower and his brother, Congressman Luis Miranda, were heavily pressured to divulge the name of the person behind the corruption scandal. Congressman Miranda gave in.

When questioned by Senator Simone Tebet, he finally said that, when talking to Bolsonaro and presenting the accusations, the President had told him that he suspected who was behind it: Congressman Ricardo Barros, the leader of the government in Congress who, however, was not removed from his duties by the President, and who also did not take the case to the Federal Police, preferring to pretend that nothing was happening.

In the face of so many scandals, Bolsonaro clearly comes across as nervous and out of control, even more than usual.

What could be simply comical actually lays bare the various threats made by Bolsonaro against the press since he took office. A few days later, he once again railed against another female journalist when questioned about the vaccine corruption scandal.

While in the streets thousands of people are demanding Bolsonaro’s resignation, there is mounting evidence that crimes have been committed by the President not only in the way he has dealt with the pandemic, but also in the purchase of overpriced vaccines. The demands coming from the streets that Bolsonaro be tried for crimes against humanity, that he might be responsible for a genocide, seem to be gaining more and more substance as the investigations into government corruption continue.