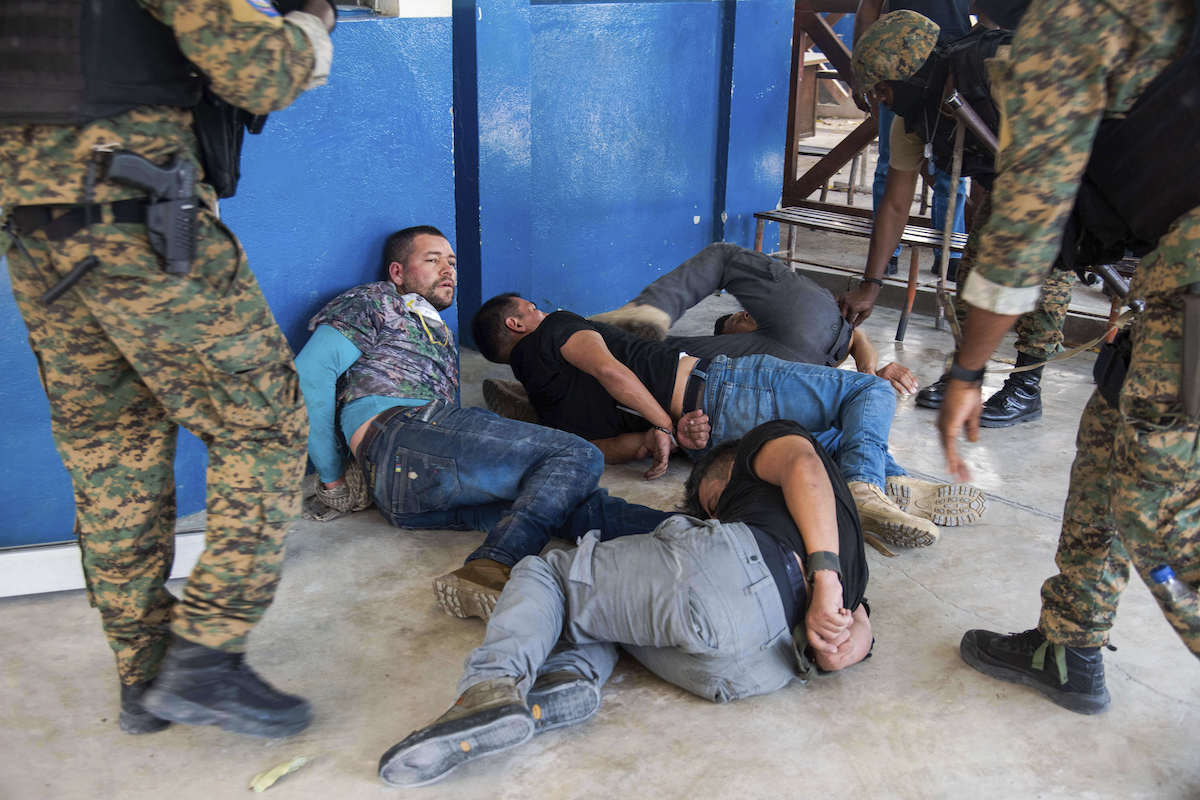 Suspects in the assassination of Haiti’s President Jovenel Moïse are tossed on the floor after being detained, at the General Direction of the police in Port-au-Prince, Haiti, Thursday, July 8, 2021. ( AP Photo/Jean Marc Hervé Abélard)

PORT-AU-PRINCE, Haiti (AP) — Haitian authorities have made more arrests in the assassination of President Jovenel Moïse, raiding Taiwan’s Embassy where several suspects are believed to have sought refuge, while also detaining two Haitian-Americans and several former Colombian soldiers allegedly tied to the plot.

In all, 17 suspects have been detained and another eight are being sought, according to National Police Chief Léon Charles.

“We are going to bring them to justice,” the police chief said, as the 17 handcuffed suspects sat on the floor during a news conference Thursday.

Moïse’s brazen killing at his home in an attack before dawn Wednesday that also seriously wounded his wife stunned a nation already reeling from poverty, widespread violence and political instability.

Interim Prime Minister Claude Joseph, who assumed leadership with the backing of police and the military, declared a two-week “state of siege,” and asked people to return to work and reopen businesses that were shut down in normally bustling Port-au-Prince. He also ordered the international airport to reopen.

Colombia’s government said it had been asked by Haiti about six of the suspects, including two of the three killed, and had determined they were retired members of its army. It offered its full cooperation.

“A team was formed with the best investigators,” said Gen. Jorge Luis Vargas, the head of Colombia’s police. “They are going to send dates, flight times, financial information that is already being collected to be sent to Port-au-Prince.”

U.S.-trained Colombian soldiers are heavily recruited by private security firms in global conflict zones because of their experience in a decades-long war against leftist rebels and powerful drug cartels.

The U.S. State Department said it was aware of reports that Haitian-Americans were in custody but would not comment.

Solages, 35, described himself as a “certified diplomatic agent,” an advocate for children and budding politician on a now-removed website for a charity he started in 2019 in south Florida to assist resident of his home town of Jacmel, on Haiti’s southern coast.

Solages also said he had worked as a bodyguard at the Canadian Embassy in Haiti, and on his Facebook page, which was also taken down after news of his arrest, he showcased photos of armored military vehicles and a shot of himself standing in front of an American flag.

Canada’s foreign relation department released a statement that did not refer to Solages by name but said one of the men detained for his alleged role in the killing had been “briefly employed as a reserve bodyguard” at its embassy by a private contractor. He gave no other details.

Calls to the charity and Solages’ associates at the charity went unanswered. However, a relative in south Florida said Solages doesn’t have any military training and he doesn’t believe he was involved in the assassination.

“I feel like my son killed my brother because I love my president and I love James Solages,” Schubert Dorisme, whose wife is Solages’ aunt, told WPLG in Miami.

Meanwhile, Taiwan’s Embassy in Port-au-Prince said Haitian police had arrested 11 individuals who tried to break into the Taiwanese Embassy in Port-au-Prince early Thursday. It gave no details of their identities or a reason for the break-in but in a statement referred to the men as “mercenaries” and strongly condemned the “cruel and barbaric assassination” of Moïse.

“As for whether the suspects were involved in the assassination of the president of Haiti, that will need to be investigated by the Haitian police,” Foreign Affairs spokesperson Joanne Ou told The Associated Press in Taipei.

Police were alerted by embassy security guards while Taiwanese diplomats were working from home. The Taiwanese foreign ministry said some doors and windows were broken but there was no other damage.

Haiti is one of a handful of countries worldwide that maintain diplomatic relations with Taiwan instead of the rival mainland Chinese government in Beijing.

Elsewhere in Port-au-Prince, witnesses said a crowd discovered two suspects hiding in bushes, and some people grabbed the men by their shirts and pants, pushed and occasionally slapped them. An AP journalist saw officers put them in the back of a pickup and drive away as the crowd ran after them to a police station.

“They killed the president! Give them to us! We’re going to burn them,” people chanted.

The crowd later set fire to several abandoned cars riddled with bullet holes that they believed belonged to the suspects. The cars didn’t have license plates, and inside one was an empty box of bullets and some water.

Charles urged people to stay calm and let his officers do their work. He cautioned that authorities needed evidence that was being destroyed, including the burned cars.

Officials have given out little information on the killing, other than to say the attack was carried out by “a highly trained and heavily armed group.”

Not everyone believed government’s account of the attack. When Haitian journalist Robenson Geffrard tweeted a report on comments by the police chief, he drew a flood of skeptical responses. Many wondered how what authorities described as sophisticated attackers be caught so easily.

Judge Carl Henry Destin, who is involved in the investigation, said Moïse was shot a dozen times and his office and bedroom were ransacked, according to the Haitian newspaper Le Nouvelliste.

Moïse’s daughter, Jomarlie Jovenel, hid in her brother’s bedroom during the attack, and a maid and another worker were tied up by the attackers, the judge said.

Haiti had grown increasingly unstable under Moïse, who had been ruling by decree for more than a year and faced violent protests as critics accused him of trying to amass more power while the opposition demanded he step down.

Gunfire rang out intermittently across the city hours after the killing, a grim reminder of the growing power of gangs that displaced more than 14,700 people last month alone as they torched and ransacked homes in a fight over territory.

Marco Destin ventured onto the streets to buy bread for his family because they had not left their home since the president’s killing.

“Everyone at home is sleeping with one eye open and one eye closed,” he said. “If the head of state is not protected, I don’t have any protection whatsoever.”

Robert Fatton, a Haitian politics expert at the University of Virginia, said gangs were a force to contend with and it isn’t certain Haiti’s security forces can enforce a state of siege.