The Dustup Around Lin-Manuel Miranda and Disney’s ENCANTO 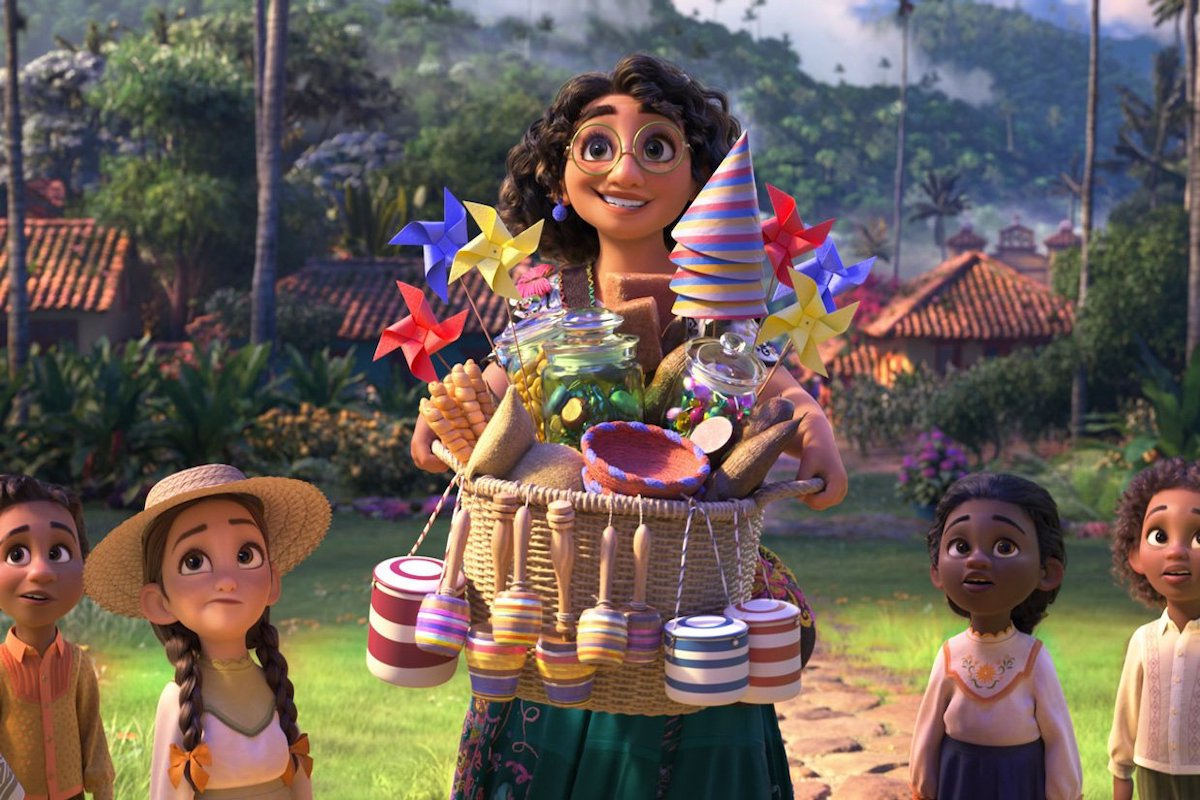 From Encanto (Courtesy of Disney)

Disney dropped the trailer for its next big animated film last week, Encanto, and the waves of online reactions came quickly. Set in Colombia and featuring magical realism, Encanto promises to be the biggest thing for Latinx representation since In the Heights. So what was everyone reacting to? The fact that one Lin-Manual Miranda wrote the music.

Yes, the man at the center of the last big debate about what constitutes Latinidad and how it’s represented in Hollywood is at it again. This time in an animated feature, promising eight new songs. Lin-Manuel Miranda’s is the only name included in the Encanto trailer and the very sight of it sent the Twittersphere into their camps—LMM fans on one side and his detractors to the other.

Let’s get to the colorism commentary first. The critique of In the Heights swirled around the fact that the film featured no dark-skinned Latinxs even as it proclaimed to represent the Dominican (and thus largely Black) neighborhood of Washington Heights. After a disastrous interview with film director Jon M. Chu and the two female stars Leslie Grace and Melissa Barrera (who particularly stuck her foot in her mouth), Miranda apologized for his role in contributing to the erasure of Black Latinos and vowed to do better.

And Encanto does appear to have Black characters amongst its leads, although there’s only so much we can tell from the trailer. It’s also worth noting that this artwork has been in development for a while so probably the characters’ skin tones were set long before In the Heights premiered. Of course, not everyone is satisfied, uncharitably portraying Miranda as a reluctant, if not false, ally.

And perhaps they have reason to doubt. While first hailed as revolutionary for casting the founding fathers as people of color, Miranda’s Hamilton has more recently sparked questions from anti-racist critics: Why celebrate these slave-holders at all? And particularly, why give them the cover of Black and Latinx re-imaginings when their actions were anything but race-neutral? Miranda said the criticism was valid, foreshadowing the sequence of events around In the Heights. So are these apologies genuine or genuflecting? Only LMM knows.

Appreciate you so much, @brokeymcpoverty. All the criticisms are valid. The sheer tonnage of complexities & failings of these people I couldn’t get. Or wrestled with but cut. I took 6 years and fit as much as I could in a 2.5 hour musical. Did my best. It’s all fair game. https://t.co/mjhU8sXS1U

While I’d argue the colorism critique is valid and should be ongoing, I think Encanto is exactly the lane where Miranda belongs. Yes, it’s set in Colombia and he’s Puerto Rican. Yes, there is other Latinx talent out there. But let’s not kid ourselves. Anglo people don’t tear down their stars this way. No one’s saying Steven Speilberg makes too many movies. Or that Australian Hugh Jackman or Canadian Ryan Reynolds shouldn’t play Americans. They’re too busy impressing each other with their accents and bank accounts. It’s a scarcity mindset that leads folks to say LMM is over-exposed. You’re only mad at him for being “the one” representative of our community if you believe we can only have one. Let the man do his thing.

Important to note that Lin-Manuel Miranda formed part of Encanto since before the country was chosen. He’s been part of the project from the beginning (2016). He wasn’t simply attached to it later. We probably wouldn’t have gotten this film without his push.

And you know where he’s best? Writing songs. I have a four-and-half-year-old daughter and we listen to the Moana soundtrack approximately twice a day at her insistence. It started when my suegra picked up the CD at a thrift store a few months ago—I’d never heard the songs before, hadn’t watched the film, didn’t know LMM was one of the composers. But it’s been months and we’re still not tired of those songs, having long since gotten bored of Let It Go and many others. And we’re not the only ones —Moana spent 47 non-consecutive weeks as the top-selling soundtrack across the nation, most recently getting bumped from the number one spot by… In the Heights.

So yes, I am excited to have another set of songs that I can enjoy with my kids (my less-than-two-year-old tries to sing along too, mostly saying ¡Maui! or ¡Moana! at the start of their songs). Because we’re the target audience for Encanto—a Latino family with young kids. I’m not saying that LMM can do no wrong or that there’s not a place for cultural criticism of children’s films. But I am saying Miranda clearly has a talent for songwriting and getting big-budget, non-white films made, however imperfect. And I plan to watch the shit out of Encanto.