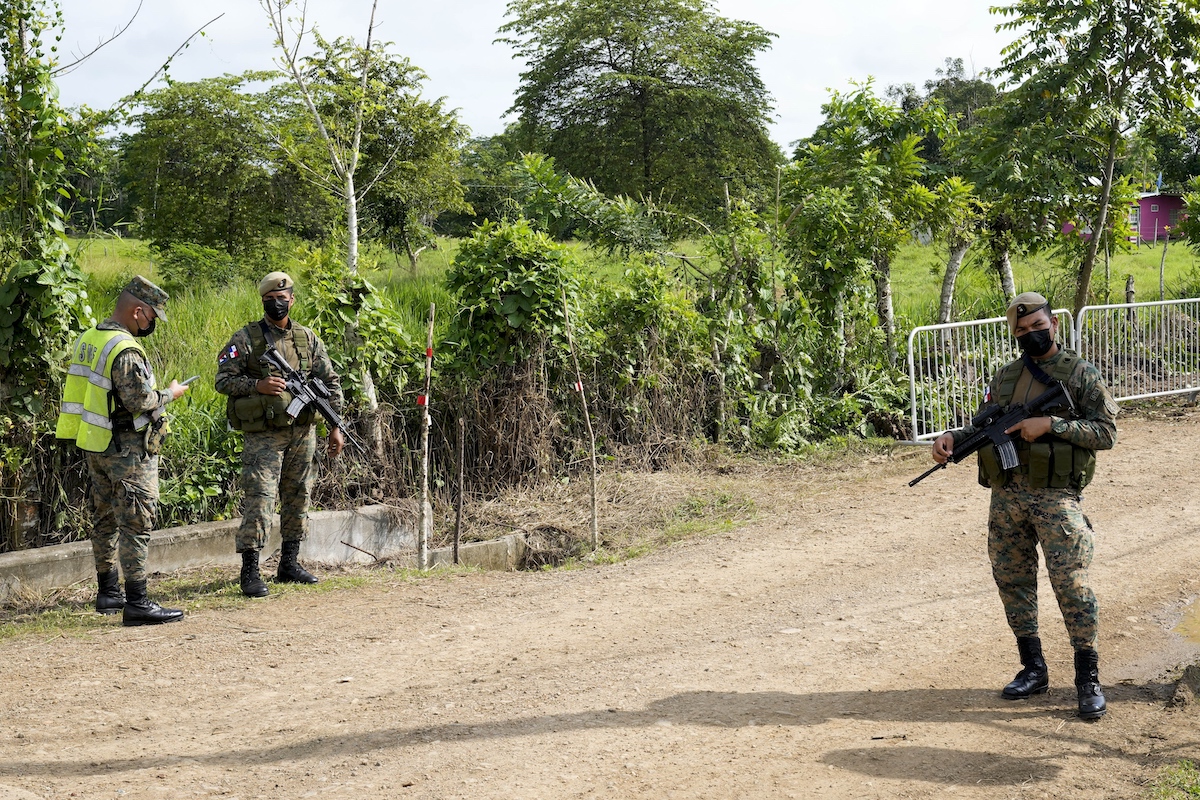 Panamanian border police stand guard outside a migrant camp before the visit of the foreign ministers from Panama and Colombia, in San Vicente, Darien province, Panama, near the border with Colombia, Friday, August 6, 2021. (AP Photo/Arnulfo Franco)

SAN VICENTE, Panama (AP) — Officials of Panama and Colombia agreed Friday to restrict the growing flow of migrants, mainly Cubans and Haitians, who have been crossing the Darien Gap that marks the border between the two countries.

The foreign ministers of both countries said they will announce a target number for migrants this week. The figure will be determined at a meeting in Colombia Monday between both countries’ security and immigration officials.

So far this year, Panama estimates about 49,000 migrants have come through the dangerous, jungle-clad gap. Officials estimate about 16% of them are children or youths.

Both countries said they will also cooperate to prosecute criminal gangs that rob migrants and traffic drugs through the largely roadless area.

The goal is to set “a number of migrants that can be received in a safe manner on the Panamanian side,” said Panama’s Foreign Minister, Erika Mouynes.

“We do not want these migrants to risk drowning, or things like that,” said Colombia’s Marta Lucía Ramírez de Rincón, “and neither, obviously, do we want them to pass through Darien, where we know there are so many risks.”

At a migrant shelter in the Panamanian town of San Vicente, which the ministers visited, Cubans Otamaris Ojeda Pompa, 50, and Yerald Montejo, 44, sat with inflamed and cracked feet after crossing the gap. The couple left Cuba on July 15 and traveled through Guyana, Uruguay and Colombia.

“In my experience, what I can tell people is, not to do it,” Ojeda Pompa said of the nine-day trek. “Don’t go through there, it is the most terrible thing in the world.”

She said she saw at least 11 corpses along the trail. “One sees a lot of things on the trail. Some of the remains are just bones,” she said. “Some bodies were just decomposing, women and young people, too.”

Recent rains have made the crossing even more dangerous.

“It is a really worrisome situation because if crossing the jungle during the dry season was dangerous, it is even more dangerous now,” said Santiago Paz, who works in the area for the U.N. International Organization for Migration.

Despite the danger, Henry still has her sights set on reaching the United States. She left her job as a cleaner in Chile, where she has lived for five years because she didn’t make enough to send money back to her family in Haiti.

Many migrants like Henry headed first to South America, where some countries sheltered Haitians after a 2010 earthquake devastated that country.

While many migrants enter Colombia illegally, officials have made little effort to deport them. Immigration officials have said it would be too costly to fly so many home.

There has been a sharp rebound in the number of migrants from last year when pandemic restrictions reduced mobility for locals and migrants alike.

Local officials estimate more than 10,000 migrants have massed recently in Necocli, a Colombian city that has become a bottleneck on the global migrant trail that winds through South and Central America, and on to Mexico and then the U.S. southern border.

Necocli residents say they have never seen so many migrants and city authorities have declared a “public calamity” because of water shortages caused by the additional demand from the migrants.

A common migrant route runs from the Ecuadorian border through Colombia to Necocli, where ferries carry people across the Gulf of Uraba to the even smaller border town of Capurgana—and then into the Darien Gap.

In the end, the two countries’ efforts may lead some migrants to hike through even more difficult terrain at other passes.

Panama’s Security Minister, Juan Pino, said the two countries agreed “we are going to control, bilaterally, the flows through Colombia from Necocli,” but noted that “there is another overland route that, because of the terrain, is very hard to control.”

One response to “Panama, Colombia Agree to Restrict Flow of Migrants”