OPINION: Drug Policing Is (And Always Has Been) Rooted in Anti-Blackness 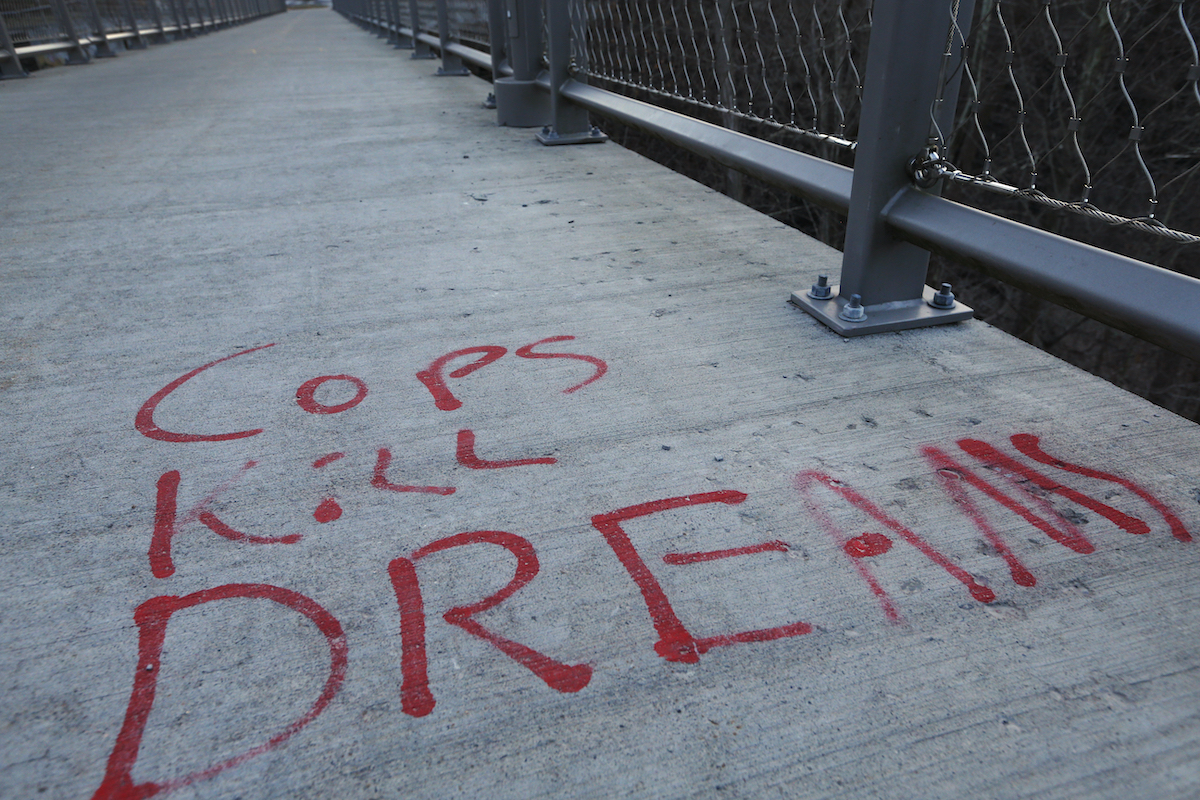 The United States criminal justice system has an extensive history of intervening in drug use. The modern War on Drugs can be traced back to the early 1970s during President Richard Nixon’s term, part of which he dedicated to criminalizing drugs as well as leveraging drug enforcement to expand federal law enforcement powers.

Successive presidents, including both Presidents Ronald Reagan and Bill Clinton, played significant roles in sustaining and expanding the War on Drugs, which has continued to actively contribute to mass incarceration and police militarization. This has had a devastating impact on communities of color, particularly Black communities. As public health professionals and advocates deeply invested in health equity, it is crucial that we spotlight racist practices that perpetuate health inequities and advocate for systemic change.

Racist enforcement practices are at the very root of drug policing, which disproportionately targets poor and nonwhite communities. There is evidence that police officers go out of their way to police poor communities of color for “easy drug arrests,” which further demonstrates the racist behavior behind drug policing. This disproportionate enforcement of policies surrounding the production, distribution and consumption of drugs has led to racial disparities in the criminalization of drugs, with significantly higher arrest rates of Black people compared to white people. This is supported by the fact that more than 90% of people in prison for drug-related offenses in New York State are Black or Brown.

The racism that is so deeply entrenched in drug policing largely stems from constructs such as the “symbolic assailant,” a term used to describe those whose gestures, language and attire have come to be associated with violence and danger. This construct functions as a shorthand for police to identify and target Black folks, and Black men in particular, of crime or misconduct. The idea of Black men as the “symbolic assailant” is further supported by racist stereotypes that portray Black men as “hypersexualized superhuman brute[s].” The dehumanization of Black men has effectively functioned as a way to justify the state-sanctioned violence inflicted upon them.

Drugs and “Driving While Black”

The racist behavior behind drug policing is enabled and reinforced by cases such as U.S. v. Whren (1996), the verdict from which provides police the authority to stop people for traffic violations, even if the underlying motive is to ultimately search them for drugs and other contraband. This case has been cited as one that provides justification for law enforcement to reprimand people simply for “driving while Black.”

Moreover, the War on Drugs has given rise to the militarization of policing, including special weapons and tactics (SWAT) units. These teams of heavily armed officers are more frequently deployed in communities with high concentrations of Black residents, and previous data indicates that more than 80% of SWAT deployments were to conduct drug raids. This indicates a clear link between drugs, policing, and Black communities and demonstrates the extent to which Black people are disproportionately subjected to policing for drug-related activity.

Regardless of drug involvement, there is extensive evidence that police brutality has an adverse impact on Black health at multiple levels. At the intrapersonal level, direct encounters with the police lead to racialized violence that ultimately causes injury or death, which —per the socioecological model—implies biological and/or psychological impact on individuals. This can be seen in cases such as that of Eric Garner, a Black man who was killed when a police officer put him in a chokehold, as well as Dondi Johnson, another Black man who was arrested for public urination and brutally injured while in custody in the back of a police van. Johnson exited the van a quadriplegic and eventually died from the injuries he sustained.

For individuals who do survive police brutality, they may be disabled as a result of police use of excessive force, likely limiting their abilities to access resources and make a living for themselves. In addition to physical injury or death, there are also disconcerting implications of police brutality for Black mental health. Witnessing the violent death of family, friends or community members may prompt anger, grief and other heavy emotional experiences for Black folks, particularly those in close proximity to the individual who was injured or killed by police. Family and friends may even be put in a position where they need to defend the character of their loved one in the wake of their death or otherwise violent encounter with police, prompting negative emotions that have the potential to damage their mental health.

In addition to the intrapersonal level, police brutality also has collective trickle-down effects that negatively impact health at the community level. The removal of one or multiple Black individuals from a given community as a result of injury, death or incarceration may divest time, energy and resources from the entire community, which —per the socioecological model— has implications for access. This is due to the fact that it may prompt those affected to take time away from their personal and professional obligations to grieve, attend funeral services, organize protests and engage in other activities in response to the violence their community experienced.

Black communities are often resource-limited as it is due to structural racism, so this may exacerbate already-existing health inequities in these communities by further limiting access to food or presenting additional barriers to accessing health care services. Moreover, youth-witnessed violence has been linked to mental health, with evidence that community trauma from violence may result in increased hyperarousal in youth. This has been explored as it pertains to young Black boys in particular, with evidence of trauma and adverse mental health impacts as a result of racism and police brutality.

Connecting anti-Black racism and police brutality back to drugs, although drugs are not always a part of the narrative, implications of drug use are often leveraged by police to justify the murder of Black people. In May 2020, Officer Derek Chauvin killed George Floyd when he kneeled on his neck for eight minutes and 46 seconds. Despite an overwhelming amount of evidence that Floyd was killed by physical violence and excessive use of force, many were quick to draw attention to the fact that a report on the autopsy alluded to “potential intoxicants in his system” as a contributing factor to his death. To add insult to injury, another officer that was present at the scene of Floyd’s killing made a flippant comment to bystanders when he said, “This is why you don’t do drugs kids.” This deeply offensive, judgmental and racist statement implied that Floyd deserved his fate because of his suspected drug use.

The tendency to victim blame in such scenarios is far from uncommon, as can be demonstrated by prior instances of police violence that followed a similar trajectory. Philando Castile and Michael Brown, two other Black men who were killed by police in recent years, were both demonized by officers and commentators alike, all of whom fixated on their behavior at the scene of the killing and argued that both of them acted as if they might have been on drugs. This inclination to respond to drugs with police violence may be connected to the false assumption that drugs predict violence, despite the fact that this idea is not supported by research. All that is to say, law enforcement is preoccupied with leveraging drug-related implications to demolish the character and justify the fatal or otherwise harmful fate of Black people who are violently killed by police.

Public Health Is Called to Action

As public health scholars, practitioners, policymakers and advocates, there are a number of steps we can take to prevent further harm and mitigate the impact of the harm that has already resulted from drug policing and the police in general. For those of us that work in federal, state or local government, we must contribute to efforts to pass policies that decriminalize behavior and activities —including drug use and possession— that stem from structural poverty, oppression and marginalization. Moreover, it is crucial that we shift our focus away from police reform and instead focus on reinvesting law enforcement funds into community-based programs that address the social determinants of health inequities.

We can also take meaningful steps toward this on our own account by being intentional about where our money goes, which we can do by actively choosing to support bail funds and other initiatives that address police violence and incarceration. Finally, as Black communities and other communities of color work through centuries of law enforcement-induced trauma in an attempt to heal, it is imperative that we support and uplift organizations such as The Loveland Foundation, which provides access to mental health services by extending affordable therapy options to Black women and girls. Taken together, these action items are necessary first steps to creating a safer, healthier, trauma-informed community that views drug-related issues as a matter of health, not criminality, and commits to building a world that is free of police and prisons.

Katie M. Collins is a third-year MPH/MSW graduate student at the University of Michigan-Ann Arbor. She has worked closely with immigrant communities and conducted research on the health impacts of immigration enforcement. She is broadly interested in addressing law enforcement violence as a public health issue and divesting from the carceral state by advocating for alternatives to policing.

One response to “OPINION: Drug Policing Is (And Always Has Been) Rooted in Anti-Blackness”