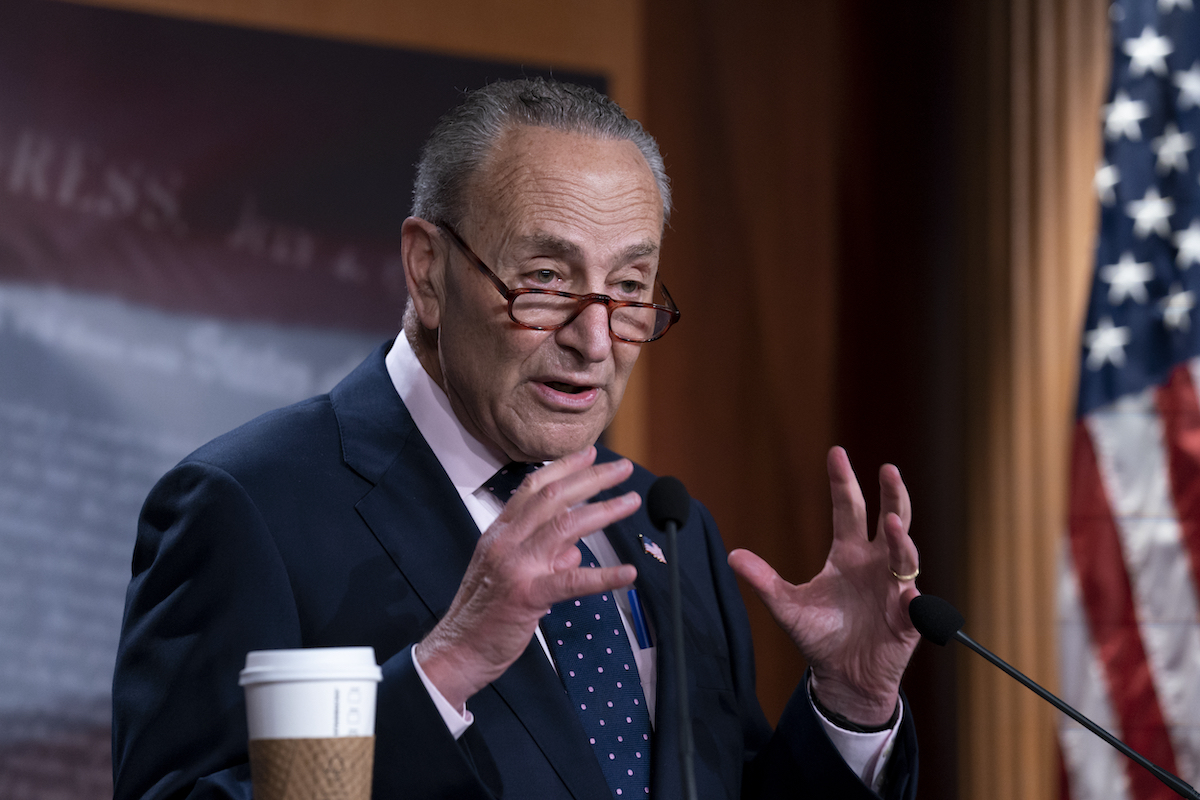 WASHINGTON, D.C. — Senate Democrats returned to Capitol Hill this week, where they expressed confidence in the prospects of passing a legalization program for up to eight million immigrants through the budget deal currently making its way through both chambers of Congress.

The next procedural step toward immigration reform in the upper chamber is a decision from the Senate Parliamentarian regarding whether or not a legalization program for undocumented immigrants fits into the massive $3.5 trillion budget package currently being prepared for a party-line vote by Democrats in both chambers.

On Friday, staffers on the Senate Judiciary and Budget Committees joined staff from the office of Senate Majority Leader Charles Schumer (D-NY) to make the case to Elizabeth MacDonough —the sixth person and first woman to work as Senate Parliamentarian— for including a pathway to legal status in the budget reconciliation.

Senator Dick Durbin (D-IL) told reporters outside of the Senate chamber on Monday that the Parliamentarian has since requested additional information on the legal theories behind Democrats’ argument.

NEW: Sen. @DickDurbin (D-IL) says Senate Parliamentarian has asked for "additional information … on the legal theories behind" including a legalization program in Dem's budget deal.

"We feel very strong about that position and we hope it is persuasive," Durbin says.

Senator Chris Coons (D-DE) echoed Durbin’s remarks in the Senate tunnels, telling Latino Rebels that the Parliamentarian is “now asking for another round of discussion and debate about” including the legalization program in the Democrats’ budget deal.

The Parliamentarian’s job is to assess whether or not a given measure has direct budgetary justification —in this case, immigration reform— then issue non-binding guidance to the Senate.

“I think the parliamentarian is a very fair-minded person who is always trying to look at precedents,” Senator Tim Kaine (D-VA) said, “and the fact that there is precedent on this makes me feel good, but at the end of the day, it’s like you try a case through a jury and you wait for the jury to make a ruling.”

“I think it’s a very compelling case,” Senator Chris Murphy (D-CT) said. “My belief is that it passes parliamentary muster.”

“We had to make the easiest, most straightforward argument to show that there would be a budgetary impact,” said a Senate aide involved with the Democrats’ arguments to the Parliamentarian, “so we did that by using Republicans’ argument against them that immigrants cost taxpayers money.”

“For years,” the aide continued, “Republicans have been screaming bloody murder about how immigrants cost taxpayers money which means the budget impact of our proposal to the Parliamentarian has direct, substantial, and intentional budgetary impacts. That’s how they meet the Byrd Rule.”

The Byrd Rule states that “the Senate is prohibited from considering extraneous matter as part of a reconciliation bill or resolution or conference report thereon.”

The Congressional Budget Office estimates that Democrats used in Friday’s arguments to the Parliamentarian would make up to 8 million undocumented immigrants eligible for a pathway to legal status.

“Legalized immigrants would be eligible for federal benefits the moment they became citizens,” the Senate aide told Latino Rebels, “which would cost an estimated $139.6 billion over a 10-year period… a budget impact that further substantiates our argument to the parliamentarian of revenue impact from immigration on the budget deal.”

Despite support from several Senate Democrats, Sen. Joe Manchin (D-WV) told Latino Rebels on Tuesday afternoon the following, “I’m not talking about any of this.”

Just asked Manchin twice, before and after Senate vote, if he still supports including immigration in the budget deal.

"I'm not talking about any of this," Manchin said. "I've already told you once…I've forgot who you were…?"

Still, veteran immigrant rights advocates have expressed confidence about where this will all go next.

“I’m feeling pretty good so far about the process,” Erika Andiola of RAICES told Latino Rebels. “We think we have a real shot at passing a bill that can legalize millions of people, without having to compromise with Republicans on enforcement. The key here is to ensure we are not just focused on the Parliamentarian, but rather on Democratic leadership, since they are the ones who have the power to move this forward.”

NEW: @DickDurbin says there has been an exchange of "legal memos" between Dem aides and parliamentarian about including legalization program in budget deal. "I don't know if there are any further meetings scheduled," said Durbin.

In the lower chamber of Congress, the House Judiciary Committee voted 25-19 along party lines to move forward with legislation offering millions of undocumented immigrants on a pathway to legal status.

The Senate is back in session on Tuesday as House committees continue to mark up the budget bill. The full House of Representatives is expected back on Capitol Hill on Monday.