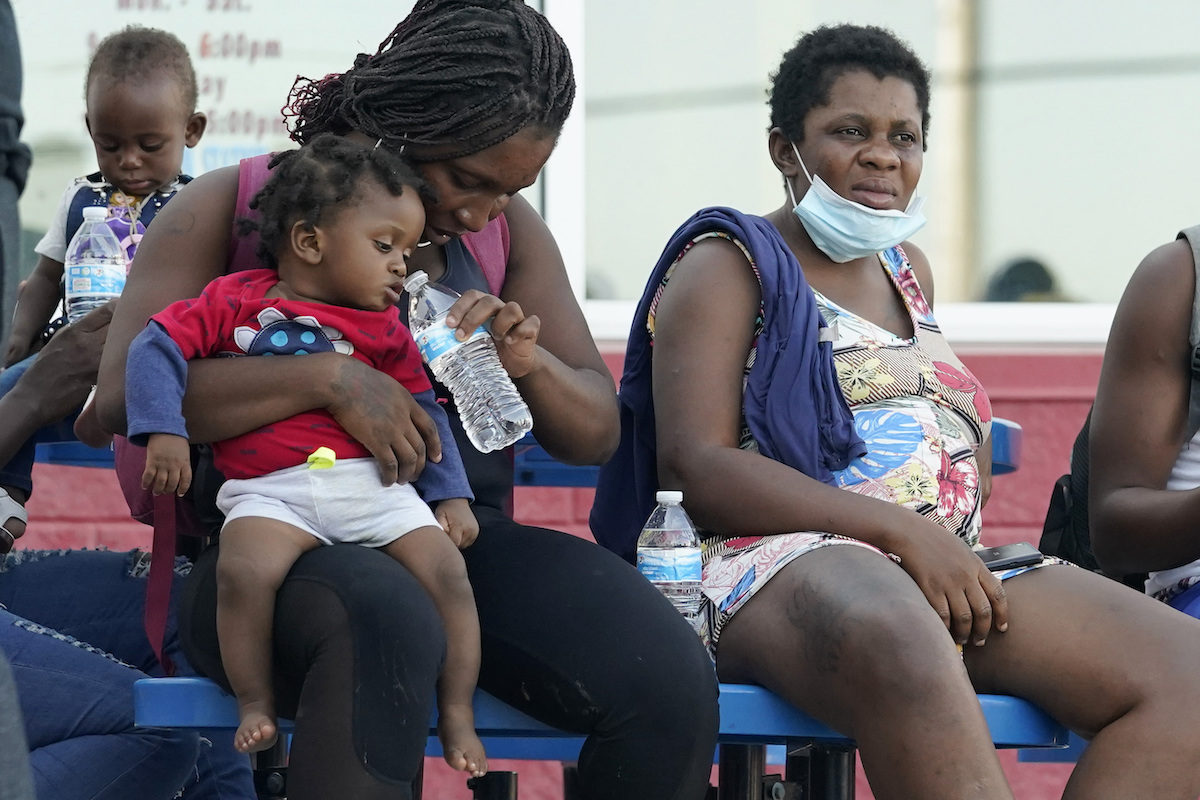 Migrants, mostly from Haiti, wait for a bus after being processed and released from a makeshift camp near the International Bridge, Sunday, September 19, 2021, in Del Rio, Texas. (AP Photo/Eric Gay)

On Monday, Lawyers for Civil Rights (LCR) filed a complaint with the Department of Homeland Security’s (DHS) Office for Civil Rights and Civil Liberties and the agency’s Inspector General, on behalf of a group of Black Haitians and their families who fled a dangerous situation in Haiti only to be submitted to inhumane treatment by federal officials at the U.S.-Mexico border.

The group, Haitian-Americans United (HAU), charges DHS with detaining Black Haitians in overcrowded conditions that posed a threat to their health, especially in light of the COVID-19 pandemic, as well as denying them access to medical care and treatment, even for pregnant women and sick children, leading to at least one miscarriage.

Black Haitian asylum seekers housed at an outdoor camp beneath the border bridge near Del Rio, Texas for up to 10 days and were denied access to water, food, sanitation, hygiene products and basic protection against the elements, including blankets. The same was true once they were transferred to detention facilities, where they were housed for up to 49 days, and where families were given minimal food, “only apples or a slice of bread to share for days,” read an LCR press release.

On top of everything, DHS also failed to provide the families with Haitian Creole interpreters.

Lawyers for Civil Rights and Haitian-Americans United say in their complaint to the U.S. Department of Homeland Security that the 48 Haitians they represent were detained in overcrowded conditions despite the ongoing coronavirus pandemic. https://t.co/uBIqkKxcXK

The demands included in HAU’s complaint include:

The group also demands that DHS issue a report of its findings from the investigation into the mistreatment of Black Haitian families and that the report be made available to Congress and the public.

“We cannot turn a blind eye to the plight of Haitians at the border,” said Reverend Dieufort Fleurissaint of Haitian-Americans United. “People are fleeing Haiti seeking our protection. They do not deserve our punishment.”

“Visceral anti-Black and anti-Haitian sentiments explain the gross miscarriage of justice experienced by Black Haitian families at the border at the hands of federal officials,” said Iván Espinoza-Madrigal, executive director of Lawyers for Civil Rights. “As our country experiences a racial justice reckoning, we must recognize that Black immigrants matter too.”

In a related story, Jean Montrevil, a long-time immigrant rights activist in New York City, has been allowed to return to the United States after being deported in January 2018, part of a Trump-era operation that targeted high-profile immigrant rights activists. He was deported to Haiti, the crisis-torn country he fled 30 years when he was 17, despite a petition to stay his deportation that garnered nearly 40,000 signatures.

After his deportation, his family and his congregation at Judson Memorial Church, which looks over Washington Square Park, immediately launched the Bring Jean Home campaign.

We are overjoyed to welcome our dear friend and immigrant rights leader Jean Montrevil home. Thank you to all who made this possible. #BringJeanHome #KeepJeanHome https://t.co/L0h60hgp75

Montrevil, a father of four, was a U.S. permanent resident who spent decades advocating for more humane immigration policies following 1990 drug convictions in Virginia that led to a deportation order in his case. In August, thanks to pressure from Bring Jean Home, Virginia Gov. Ralph Northam pardoned Montrevil, allowing him to reopen his case against Immigration and Customs Enforcement (ICE), which he claims deported him for his activism, thus violating his First Amendment right to political speech.

The New York University (NYU) School of Law’s Immigrant Rights Clinic has documented more than 1,000 instances of retaliation against immigrant rights activists in recent years. The Democratic Party condemned retaliation through immigration enforcement as part of its 2020 platform, and in recent guidelines for DHS, Secretary Alejandro Mayorkas stated that “[a] noncitizen’s exercise of their First Amendment rights also should never be a factor in deciding to take enforcement action.”

Montrevil is now back in New York City on a 90-day special-interest parole as he forwards his case against ICE, looks to regain his permanent residency, and ultimately apply for U.S. citizenship.

When ICE deported activist Jean Montrevil, it ignited demands to #BringJeanHome and #KeepJeanHome. In his first interview since landing back in the U.S. and in a Democracy Now! exclusive, Montrevil says, “I will continue to speak out."https://t.co/OT7Os80Zyb pic.twitter.com/rYSQ7eebDb

“Jean’s advocacy for immigrant rights inspired a movement,” said Alina Das, co-director of the NYU Immigrant Rights Clinic, and one of Mr. Montrevil’s attorneys. “When he was deported, that movement continued, and fought for his return. No one should be deported for speaking out about the cruelty of the immigration system. We celebrate the return of Jean Montrevil as a first step towards righting these wrongs.”

The Biden administration is taking heat from immigrant rights advocates for his mass expulsion of Haitian asylum seekers in the past few months. Haiti, long plagued by political and economic instability, has been especially rocked recently by the assassination of President Jovenel Moïse in July and a 7.2 magnitude earthquake in August that killed more than 2,000 people and destroyed more than 137,000 homes.

And just over the weekend, 17 missionaries —16 Americans and one Canadian, including five children, one as young as eight months— were kidnapped by a Haitian gang as they returned from a visit to an orphanage in a northeast suburb of the capital Port-au-Prince. The gang, known as “400 Mawozo,” is demanding $1 million for the release of each captive.

“To return to Haiti is to walk into the arms of death with eyes wide open,” one refugee told LCR.

One response to “Black Haitian Families Take on Department of Homeland Security, Activist Returns After Deportation”