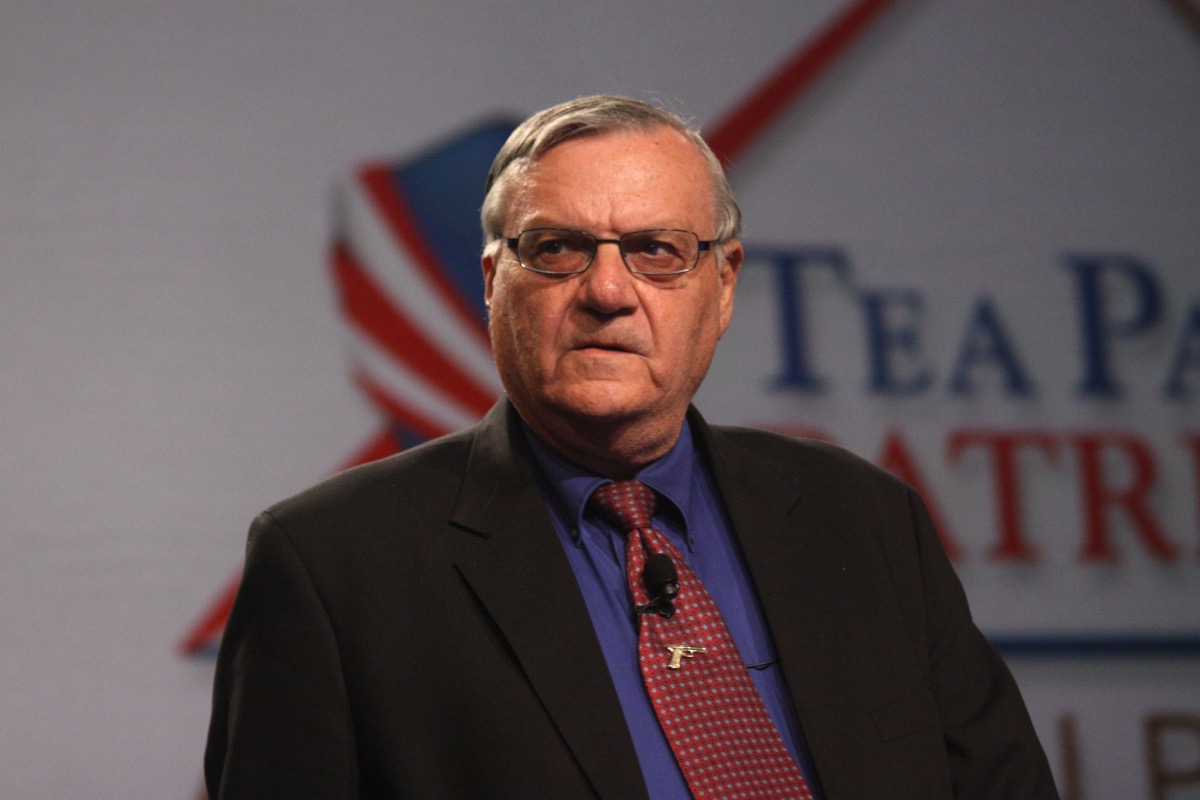 Every great drama has a villain and a hero.

The trouble with recounting the drama surrounding Arizona’s decades-long cultural and political clashes over immigration is that there have been so many villains and heroes it’s hard to know where to start.

In that case, you do what Terry Greene Sterling and Jude Joffe-Block did: you find two people whose personal experiences virtually tell the story for you.

It’s a common rhetorical device journalists use to report big, complex stories in a way that makes them easier to digest. Greene Sterling and Joffe-Block put the technique to good use in their new book, Driving While Brown: Sheriff Joe Arpaio Versus the Latino Resistance. 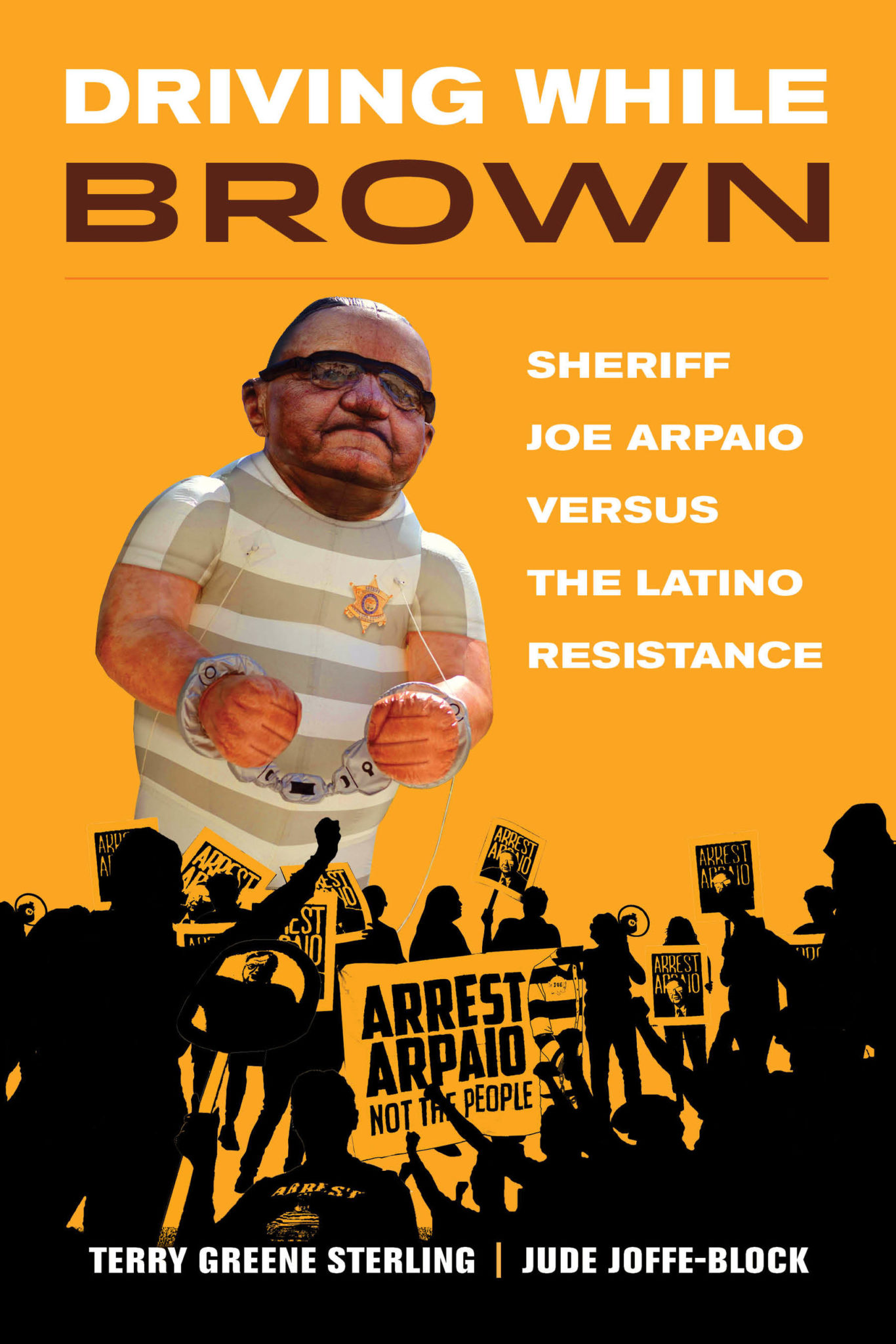 Courtesy of University of California Press

“Writing [non-fiction] books is like writing plays,” said Greene Sterling, a long-time Arizona journalist and the Walter Cronkite School of Journalism’s first writer-in-residence. “You need to have a tension to keep the reader engaged and get you through the book.”

In Driving While Brown, much of the story revolves around ex-Maricopa County Sheriff Joe Arpaio and long-time grassroots activist Lydia Guzmán, who as a pair supply more than enough tension to keep us engaged.

“We found that the mano a mano conflict between a very brave Latina activist and an extremely powerful sheriff was sort of a metaphor for what was going on between the restrictionist forces who wanted to keep immigrants out of the United States and the Latino activists who were battling for civil rights,” said Greene Sterling.

“Restrictionist” is the ostensibly apolitical term the authors settled on to describe the ongoing “movement to halt unauthorized immigration.”

That said, the writers aren’t afraid to call out the abusive and often racist treatment of immigrants and U.S.-born Latinos that’s occurred in Arizona and across the country. In the book’s prologue, for instance, Greene Sterling and Joffe-Block refer to former President Donald Trump’s “pro-white, anti-Muslim, anti-brown immigrant rhetoric” in the wake of white supremacist rallies in Charlottesville in 2017.

Arpaio was an early supporter of Trump’s presidential aspirations, and he was ultimately rewarded with a presidential pardon on criminal contempt of court charges related to a federal racial profiling lawsuit against the Maricopa County Sheriff’s Office.

The lawsuit stemmed from the arrest in 2007 of Manuel de Jesús Ortega Melendres, a Mexican tourist who was detained and handed over to federal immigration authorities by Arpaio’s deputies after they stopped him for an alleged traffic violation. Greene Sterling and Joffe-Block say it was because of their individual experiences reporting on the resulting Melendres v. Arpaio lawsuit that they set out to write their book together.

“I was covering this historical class-action lawsuit, the Melendres case,” said Joffe-Block, a former radio reporter who now works for the Associated Press. “Radio is a wonderful medium, but to explain decades of context is not possible in a four- or five-minute feature.”

One of the book’s strengths, in addition to its painstaking reporting, is the writers’ knack for humanizing the subject of immigration, which often gets reported as “process” stories about arcane government policy or in sensationalized accounts of immigrant crossings at the border.

In truth, immigration is the story of average people, mostly families, who have been forced to leave their homelands, sometimes in the face of violence, war, or natural disaster. Most immigrants, given a choice, would rather keep living and working where they were born and raised, unless driven to migrate to escape political or economic strife.

While Arpaio and Guzmán’s personal journeys led them to starkly different views on U.S. immigration policy, both are the children of immigrants.

Ironically, Arpaio, who served 24 years as sheriff and came to be viewed by immigrant rights activists as the personification of America’s pro-white, anti-immigrant movement, grew up facing racial taunts as the child of an Italian immigrant.

“Arpaio’s dad was an unwanted immigrant,” said Greene Sterling. “He grew up with the taunts of children who reviled his father, in the same ways that his supporters now taunt [Latino] immigrants.”

Guzmán, who works as a community outreach director for Chicanos Por La Causa in Phoenix, was born to an undocumented Mexican immigrant mother and a Mexican-American father.

Growing up in California, she attended a “predominantly white Catholic school in the San Fernando Valley, and never thought much about her ethnicity,” the book recounts, until one day Latino laborers whistled at her blond, bikini-clad friend. “I hate Mexicans,” the friend said, before turning to Guzmán to add, “But you’re different.”

The authors said they picked Guzmán to help tell their story because “she had lived through so many of the key moments of the book, whereas other people popped in and out,” though Greene Sterling and Joffe-Block are also quick to acknowledge that Arizona’s history of repressive immigration policies, including the passage in 2010 of Senate Bill 1070 (known as the “show us your papers” bill) has inspired a generation of prominent Latino political leaders across the state.

🔴BREAKING: Blanca, an AZ immigrant youth confronts @SenatorSinema inside her classroom, where she teaches @ ASU. "in 2010 both my grandparents got deported bc of SB1070…my grandfather passed away 2 wks ago & I wasn't able to go to Mexico bc there is no pathway to citizenship." pic.twitter.com/JDZYY2fOD2

“She gave up her job to be an activist,” said Greene Sterling. And because of her single-minded commitment to defending immigrant rights, “her home was foreclosed on, and she lost her family for a bit because they just couldn’t stand her being an activist all of the time.”

“We really wanted to show that reality,” said Joffe-Block, “because here she was behind the scenes, along with so many others, helping to recruit plaintiffs for the [Melendres] lawsuit, working on a hotline, providing direct services, running press conferences, and firing up a text tree every time Arpaio held a neighborhood [immigration] sweep.”

At just under 400 pages, Driving While Brown achieves what the authors intended.

“We wanted a reader to come away with a sense of the history of immigration policy on the national and state level without it being boring and dry,” said Joffe-Block.

The book does that and more, but don’t expect a tidy ending. As Greene Sterling points out, Arizona’s story of Latino resistance against repressive immigration policies is far from over.

James E. Garcia is a journalist, playwright and communications consultant based in Phoenix, AZ, the editor and publisher of the weekly newsletter Vanguardia America, and author of the upcoming book “Vanguardia: The American Latino Renaissance & the Future of Our Nation.” Twitter: @JG_Vanguardia